I’m happy to tell you all that I made it out of the Regina airport!  I know you were wondering.  Well, I had a fantastic visit with my grandma – I’m so glad I went – and I also saw my beloved aunts and cousins as well.  It was, all in all, a perfect visit!

I didn’t even cry or get lost.  Well, truth to be told, I almost cried a couple of times, but I didn’t, so I consider that a win.  The two hour drive from the airport to my grandma’s house started out quite promisingly, with the exception that I had forgotten to bring anything to listen to and so I had my choice of two music stations and AM talk radio.  In the four hour round trip, I heard Dirty Deeds by AC/DC no fewer than three times, and Dancing in the Dark, Living on a Prayer, and Love Bites twice each. 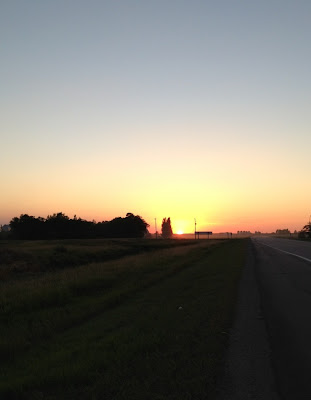 I did become a little unnerved after the sun set, driving in the pitch black, along a very bumpy highway on which several skunks had apparently JUST been run over.  I started worrying that I too would hit a skunk and would have to arrive at my grandmas with a stink bomb of a car.  This did not come to pass, fortunately, although at one point in the dark drive I thought it was raining and put on my windshield wipers only to discover that what I thought were raindrops were actually bugs.  Bugs.  Smeared all over my windshield.  While driving in the dark on a two lane highway with semis whooshing by me in the other lane.  I was a little stiff from all the white knuckling, but the trip back to the airport, in the daylight, was much more pleasant.  I could appreciate the big dome-like sky opening up all around me, with the seemingly endless prairie stretching out in all directions, studded with hay bales and pump jacks, the dust from the combines rising like a fog. 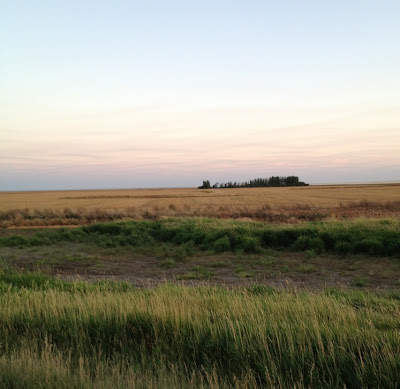 The only other issue I had was when I was back in Regina.  I drove to the airport, then drove past it in order to find a gas station to fill up the rental car.  I drove, and drove, and no gas stations could be found.  I started to get nervous that I would drive too far and not be able to make it back to the airport – I’ve gotten lost under similar circumstances – and so I decided to turn around and head back.  I thought that just paying the ridiculous fee for the rental company to fill the tank would be better than me circling the streets of Regina forever, missing my flight.  But then when I turned, I saw a sign for a Husky station!  Score!  I drove up there, and then stopped, puzzled.  Maybe there was no gas?  Maybe it was just a convenience store and they’d forgotten to take down the sign? 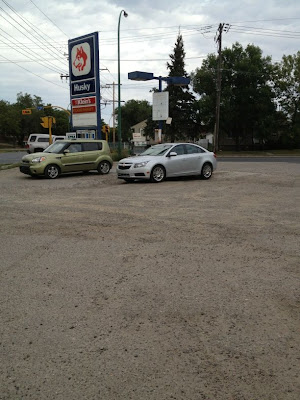 But no, there was a tiny gas pump, hidden by the car getting gas.  Double score!  I perkily went into the convenience store to prepay – as the sign suggested – and the attendant suggested I just go ahead and fill up, and pay later.  Now – and here comes the embarrassing part – recalling that I am a person who does not know how to flip the hood on the vehicle that I have been driving for almost nine years, and that I am a person whose coping mechanism when something goes wrong with the car, even if “going wrong” means “need more washer fluid”, is to burst into tears, I sat in the car for a solid five minutes unable to figure out how to open the gas cap.  Finally, the attendant, probably thinking that I am a complete moron, came out to help.  It turned out that I just needed to press the gas cap to open it.  Oops!  I went to go fuel up but the pump was not automatic.  I stood at the car for what felt like an eternity, but was probably only a couple of minutes, trying to figure out WHY the gas wasn’t going into the car.  The attendant spoke to me over the loudspeaker but I couldn’t understand what was said.  Finally the woman who was filling her car came over to me and said “Listen sweetheart, you need to push down this lever, like this” then proceeded to carefully watch me fill the tank, possibly concerned I would start spraying gasoline everywhere then light a cigarette, a la Zoolander.  When I finished and thanked her for her help, she made sure I knew how to close the gas cap – which I DO – and then very slowly and clearly gave me very specific directions on how to get back to the airport.  Thanks, strange lady!  Tears averted!

I should add at this point that I’m really good at math and I can lift heavy things all by myself, so I’m not a total feminist failure.

The rest of the trip was fairly uneventful, my flight somehow missing a violent electrical storm that had shut down the airport for a short period, of which I was blissfully unaware, although my husband was waiting for me in a state of extreme stress.  I also discovered that I grossly overestimate my own importance, since I came home to two happy children, a clean house, and BEDS THAT HAD BEEN MADE, INCLUDING PILLOW SHAMS ON PILLOWS, AND DECORATIVE PILLOWS ON THE BED.  My word, that was almost as good as an unloaded dishwasher.