Last week I stepped into my Sorel boots and immediately got a very wet sock. It turns out that, after nine years of service, they have given up the ghost. There was a big crack in the sole of the boot; farewell, Sorels. 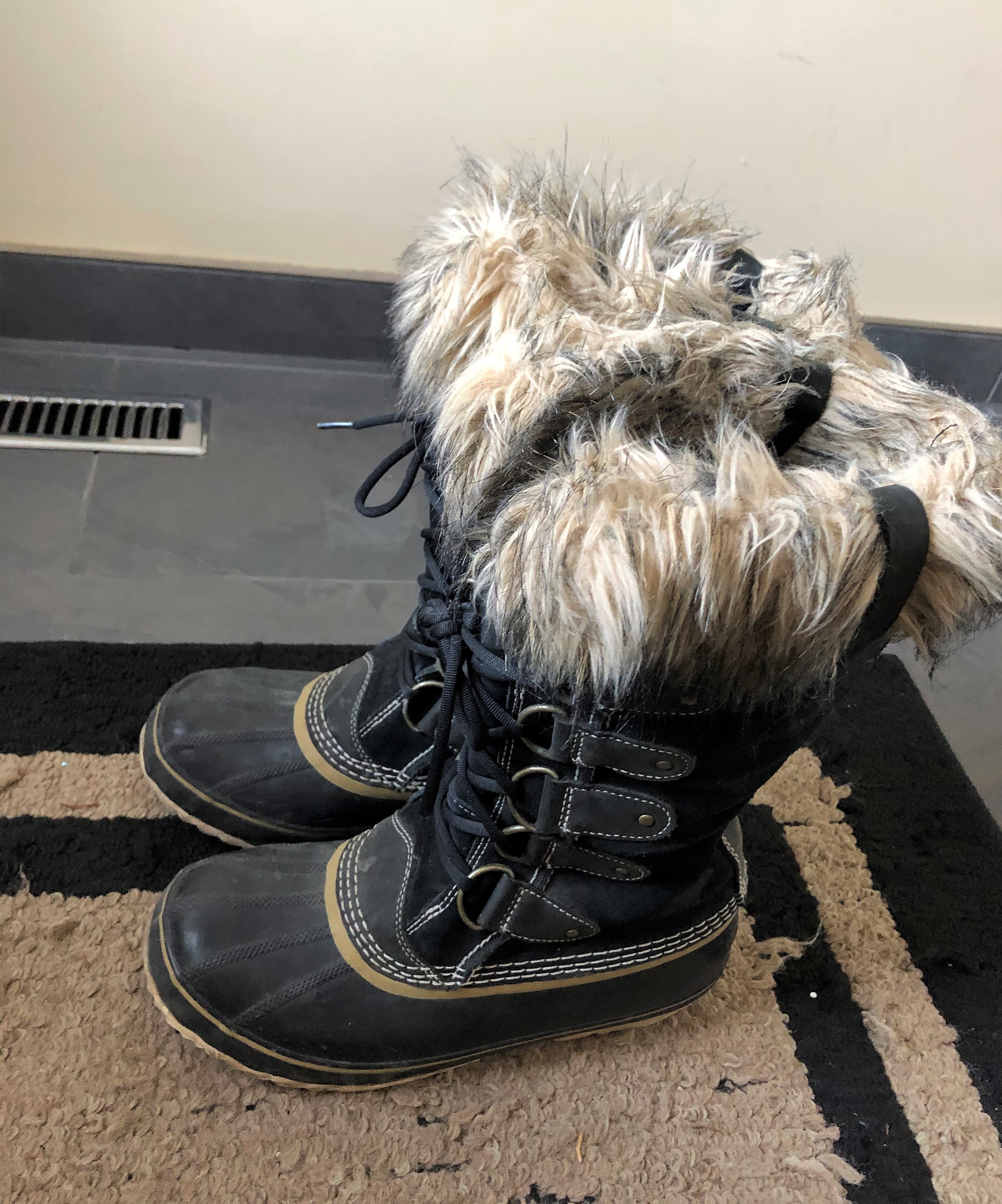 I actually checked the blog to see when I purchased them and, indeed, it was January 2011. Even though these boots were perfect for just stepping into, making them ideal for wearing to and from the gym and yoga, I am not that sorry to see them go. They were heavy – like walking with 1980s-style ankle weights – and due to their age, not even very warm anymore. Plus, they are extremely unattractive, which in a way was a bonus: no one would ever voluntarily steal them from the gym or wherever. Who would want such ugly, heavy boots? That said, my friend Taryn (HI TARYN) is attempting to fix the sole so at least they can be donated, as the thought of just dropping them into the garbage was a bit too much for me. Maybe someone will indeed want them.

I can really understand, as I age, how old people end up with substandard things they have had for decades, just because they are “too good” to throw out. For one thing, time goes by so quickly – we are more than a third through February, people, wasn’t it just New Year’s a minute ago – and so things purchased years ago can still feel “new.” I just bought new towels, the old ones going to our “vacation house” (it’s a LONG story that I might get into sometime), and the difference is night and day. How have we lived this long with what essentially feels like burlap, when we could have been enjoying these new towels that feel like I am drying myself off with an actual cloud? Well, those burlap towels were purchased when we renovated in 2012, and they probably felt like clouds at the time too, but that was EIGHT YEARS AGO. Things wear out, like towels, and Sorel boots, and flannel sheets, which currently also feel like burlap and which are, as we speak, on sale at Costco for $49.99 per set. But my sheets are perfectly fine and serviceable, I think, I just bought them. Probably also eight years ago, at the least.

Anyway. I may work myself up to new flannel sheets at some point, but right now, maybe because of my Sorels, maybe because of my panic-at-the-disco about gel pedicures, I want to talk about feet. I promised you all that I would talk about my favourite foot care products, and I do not disappoint. Whether you do your own pedicures, or you are looking for some nice products, or you are just actually interested in the state of my feet, I have recommendations for you. Without further ado…

Nicole’s Favourite Things: The “Yes, I Am Still Talking About My Feet” Edition

The first thing I do when giving myself a home pedicure – if I have time, that is – is to soak my feet in (usually very) hot water, with a sprinkle of the Saje bath salts below. I am not sold on Saje bath salts over any other bath salts, but I a) do not take baths* and b) a student gave me this giant bottle of salts, and so I like to use them. They are a lovely lavender scent, and they are “yoga” brand so, fun! But, you know, use whatever you like.

*I feel weird saying I do not take baths, because it makes me sound like an unwashed barbarian. I’m sure you all assume that to mean that I only take showers.

Anyway, I soak my feet for 5-10 minutes or so, depending on how much time I have, and then I painstakingly remove my nail polish. I say painstakingly because I have worn red nail polish on my toes since I was sixteen years old, with no breaks, and so my natural toenail colour is, shall we say, unattractive. 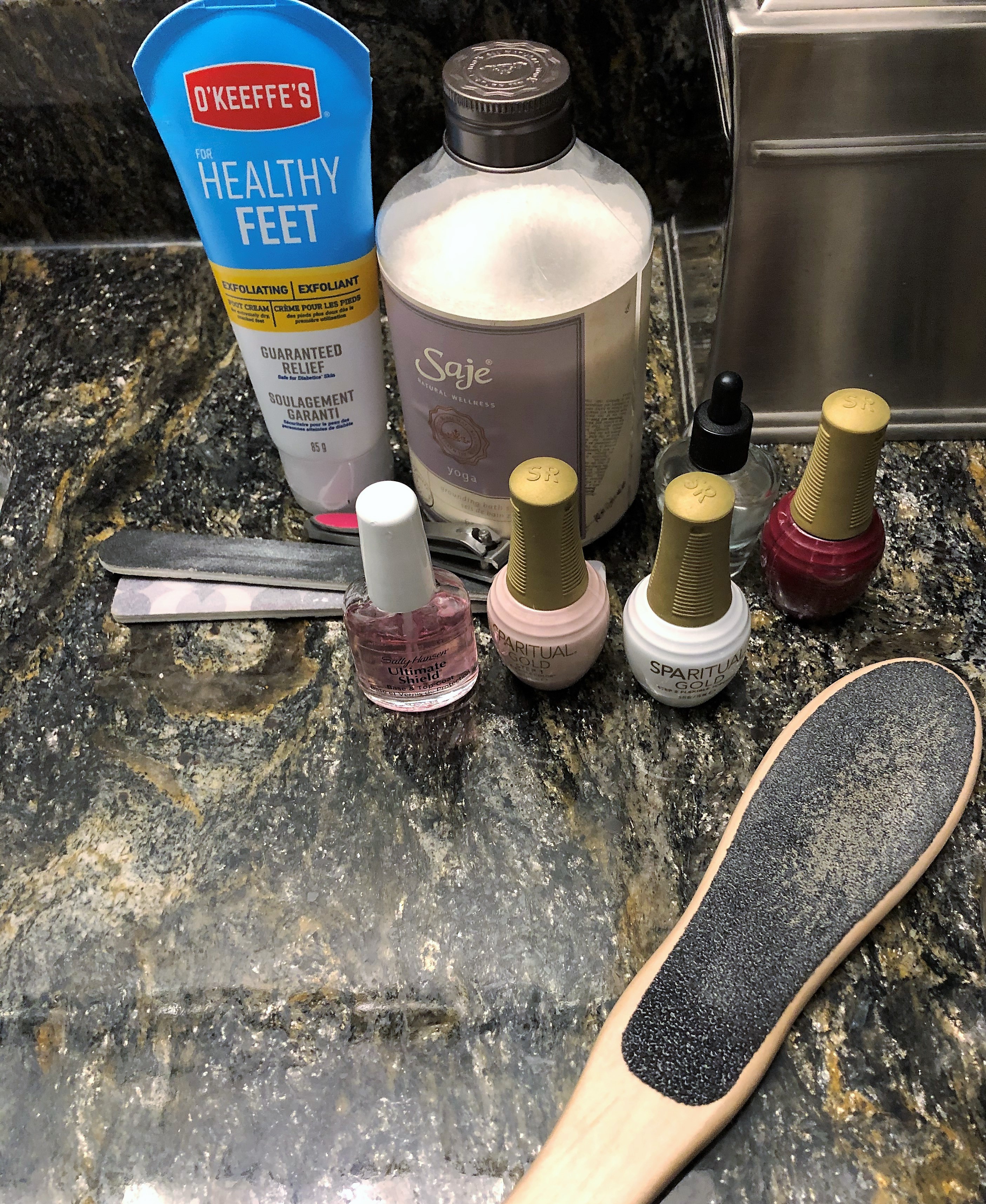 After soaking, if time permits, I quickly file any dry, crusty parts off of my feet with the file above. I have no idea where that file came from. Did I buy it? Did it come in a gift pack? I have no idea. I just know it’s been in my bathroom drawer for many years and it is a very good quality foot file. 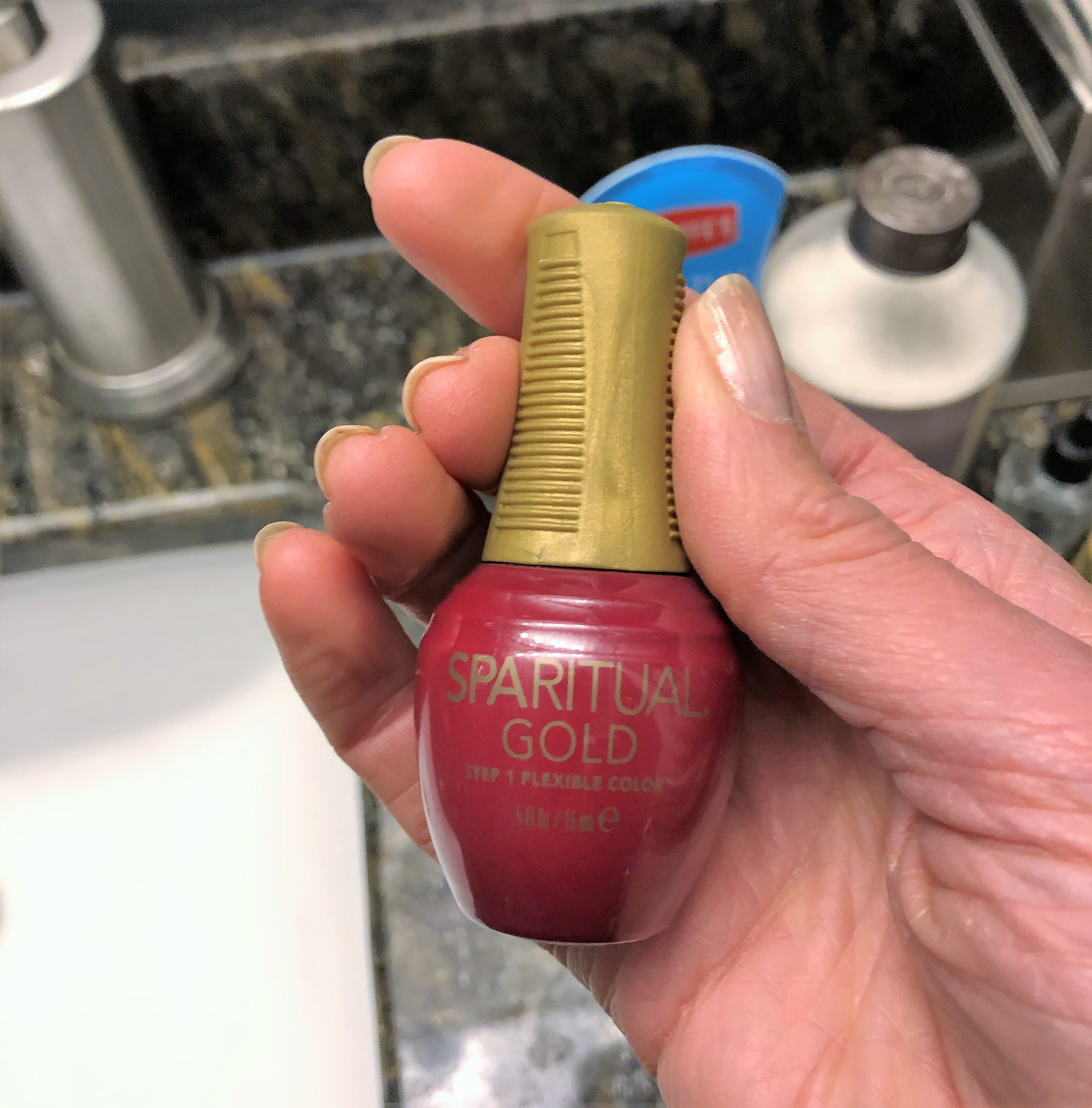 Honest to god, this is the best nail polish ever. It’s what they use in the fancy salon I frequent with my mom on Mother’s Day for our annual pedicure. I usually buy a bottle while I’m there, and it lasts me pretty much the whole year. This colour is Soulful, which makes me smile. The polish advertises as being vegan and cruelty-free, which is nice, but it also makes you wonder how a nail polish could NOT be vegan. It’s probably best not to think about it. Anyway, this is a super-long-lasting polish, and the pink colour in the above photo is what I use on my fingernails. It’s a nice natural colour, called Idyllic. Idyllic and Soulful, that’s me.

The white bottle in the group photo is the official top coat for Spa Ritual, and it does make the pedicure last a long time. However, I haven’t noticed a significant difference – other than price, hoo boy, the price – between that top coat and good old Sally Hansen: 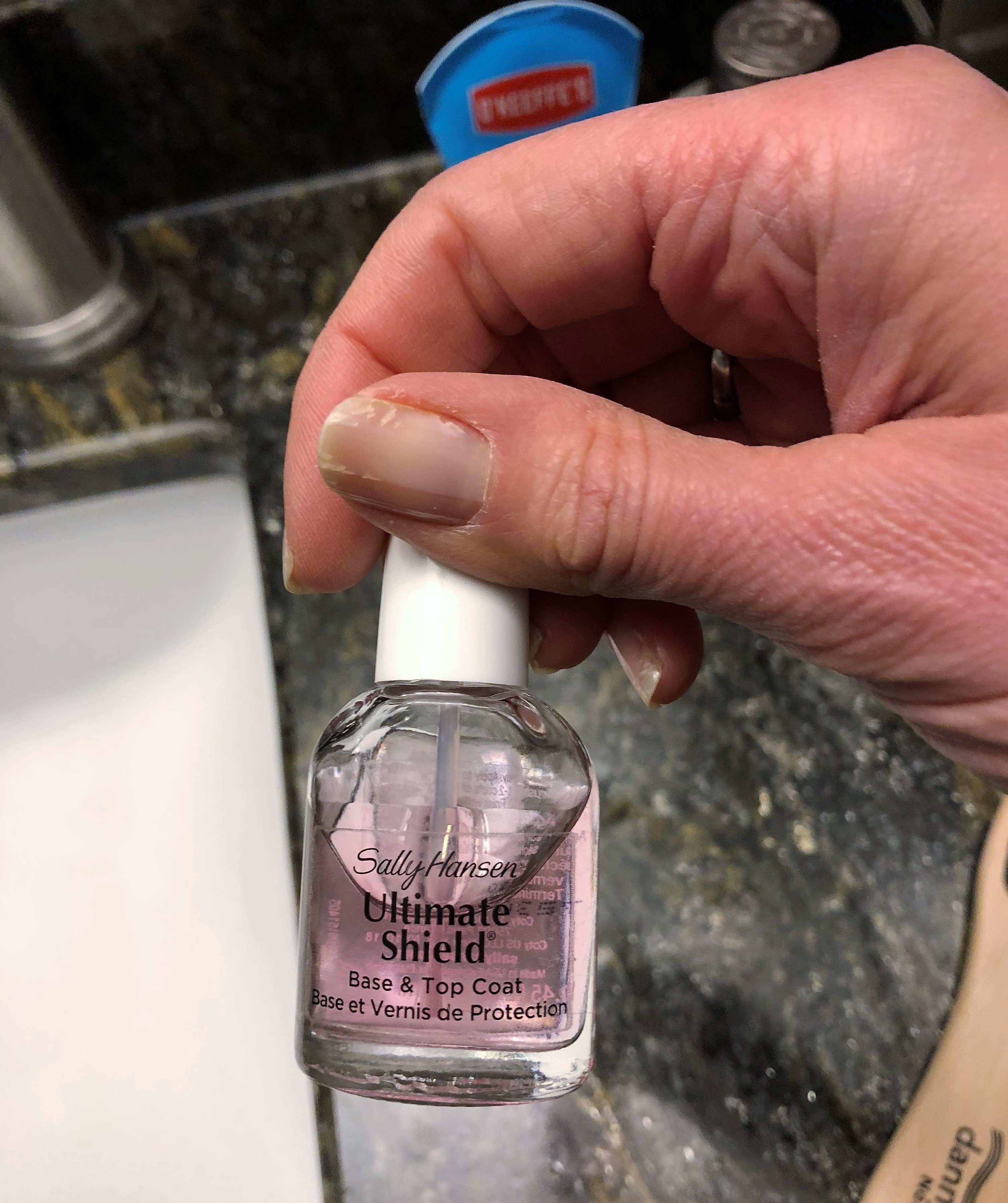 I don’t think I’ve ever used it as a base coat. Maybe this accounts for my hideous natural nail colour. 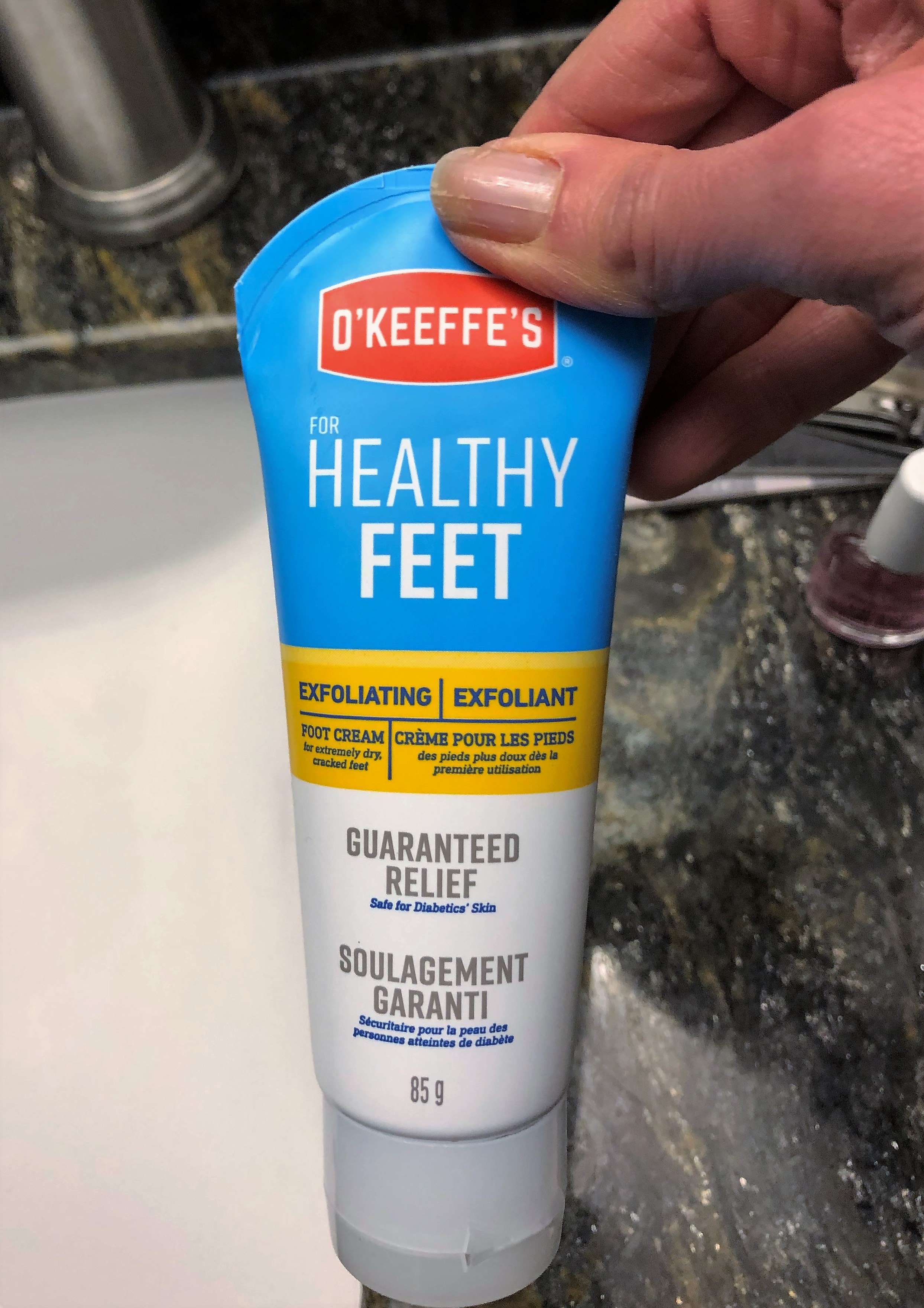 I have tried every single foot cream/ foot balm/ foot “rescue” that you could possibly imagine, and they all worked in a fair-to-middling kind of way. My husband was swayed by an O’Keefe’s commercial to try their dry skin cream and reported it to be better than anything he had ever tried, including Gold Bond. I thought I’d try the foot cream, and was almost put off by the cost, but I soldiered through.

People, this is the greatest foot cream of all time. It is like a literal foot miracle. Dry skin, cracked skin, crusty skin, all GONE. I was braced for it to smell medicinal and old-people-ish, but it is actually light and minty scented. I cannot say enough about this cream; for once the commercials do not lie. Just a word of warning, as with any foot cream, be sure to put socks on after use, and it’s probably best to use it at night and not right before you put on shoes or sandals. Unless you like footprints on your floor and sliding out of your shoes. 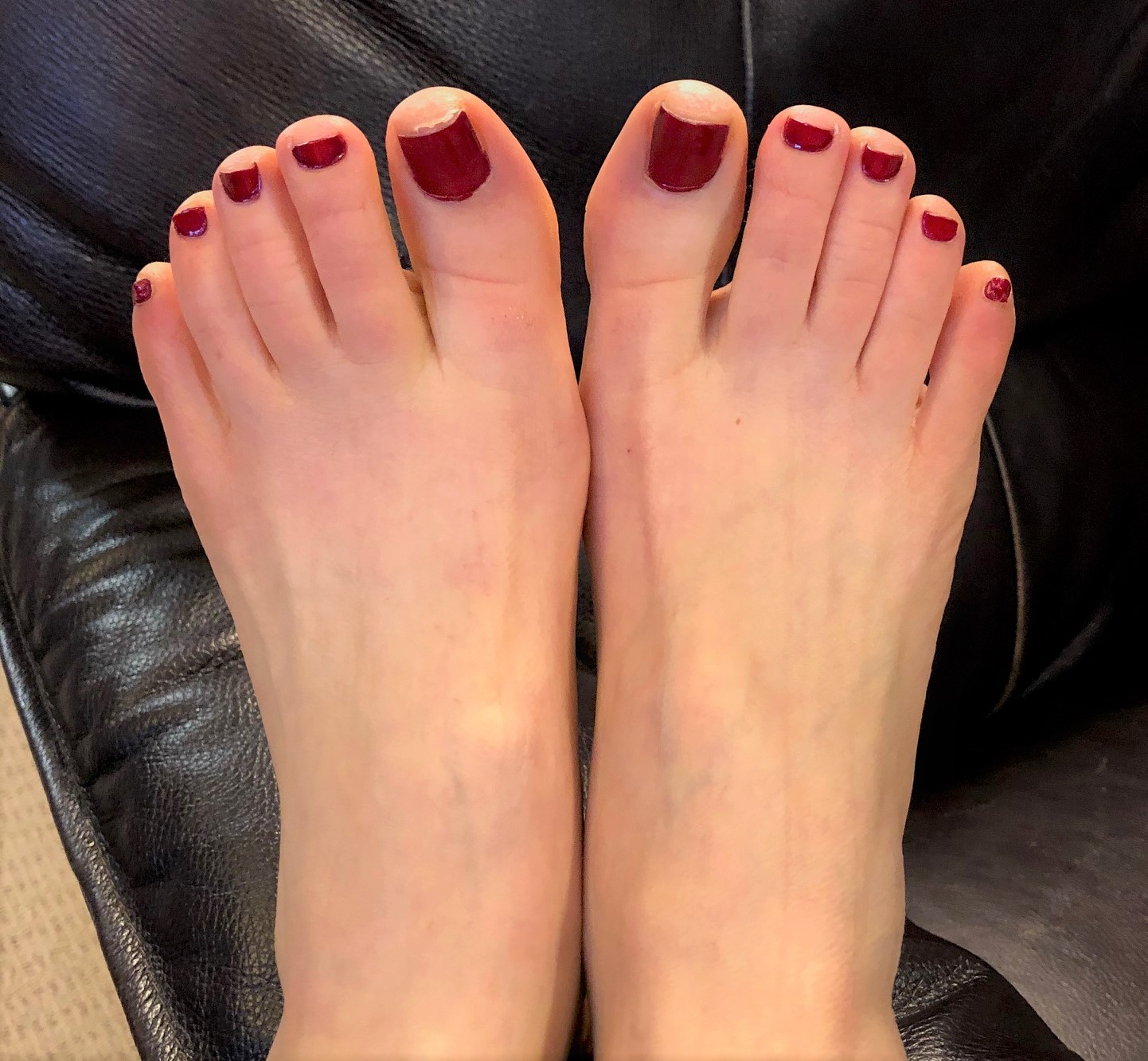 It’s been almost two weeks since my last home pedicure – not bad!

Feel free to share your favourite foot products with me, and have a happy Monday! xo