Search
Menu
Categories
‹ prev next ›
8
We Will Assimilate You
December 17, 2019 Nicole Boyhouse Food

It feels like, in this stage of life, that every single week we think next week things will slow down over and over until we drop dead from exhaustion, but I am optimistic that this week, THIS VERY WEEK, things will indeed slow down.

Well, maybe. At the very least, it is the last week of school – and for me, work – before a few weeks off, and those weeks off will be very welcome and – hopefully – slow. I have big plans to watch movies and read books, to drink coffee with almond Bailey’s in it, and to recruit my husband in to coming with me to help with what grocery shopping will need to be done. I am strong, invincible woman, but grocery shopping – particularly in the winter, particularly when shopping for people who WILL NOT STOP EATING – is physically exhausting.

I go weekly to Superstore, and bi-weekly to Costco, and because Wednesday is my designated Errand Day, those two chores happen on the same day every two weeks. Last Wednesday it started to snow, huge fluffy thick flakes, and I had to really brace myself for the Epic Grocery Day. If you’ve ever pushed a giant cart full to the brim with groceries through a snowy, unplowed parking lot, not once but twice in a two-hour span, you will understand how physically depleted I was by the time I pulled into my garage. In retrospect, I probably shouldn’t have gone for a 6.5 km run BEFORE doing that, but how was I to know it would start snowing immediately before heading out for Epic Grocery Day? I am not a meteorologist. 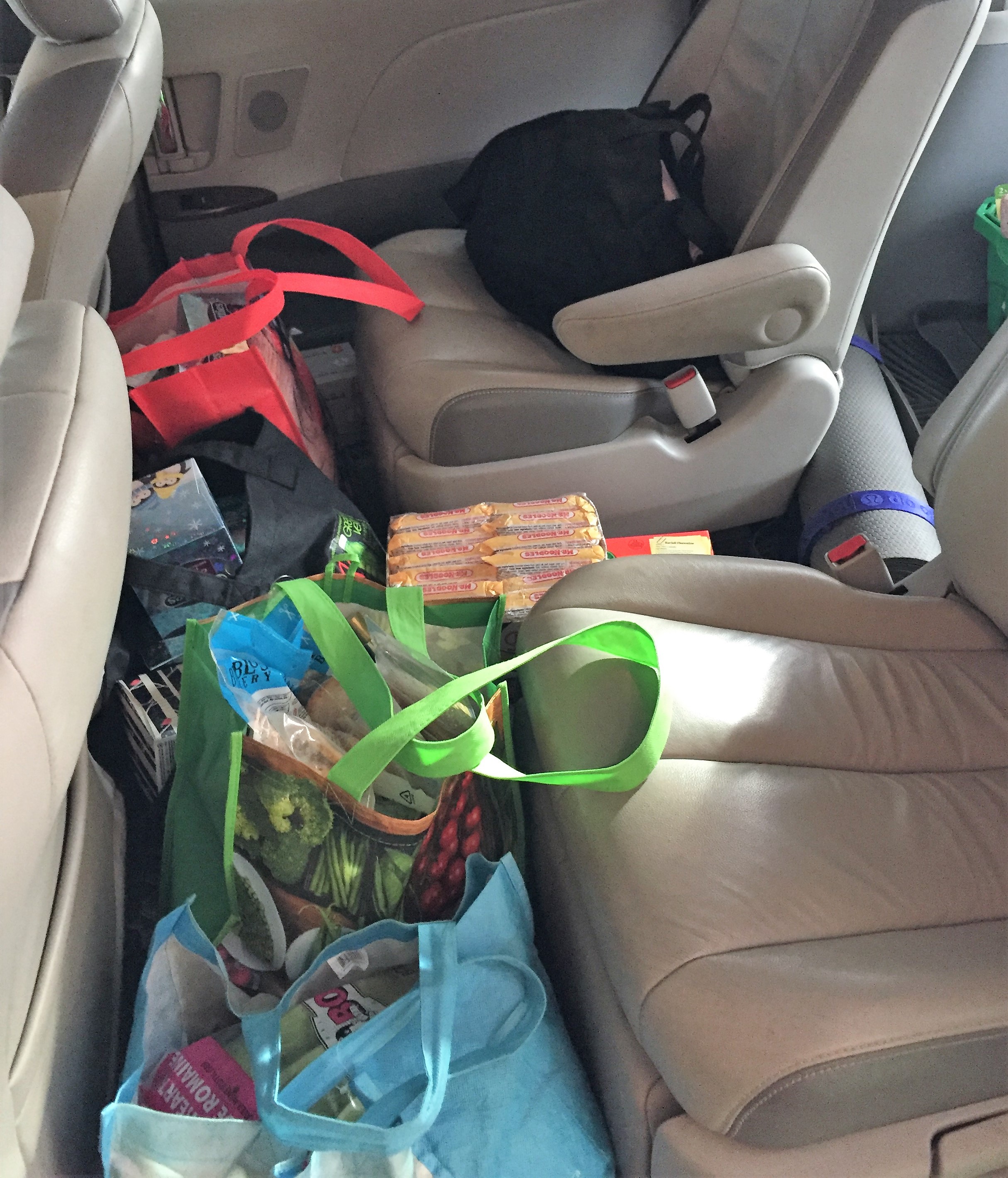 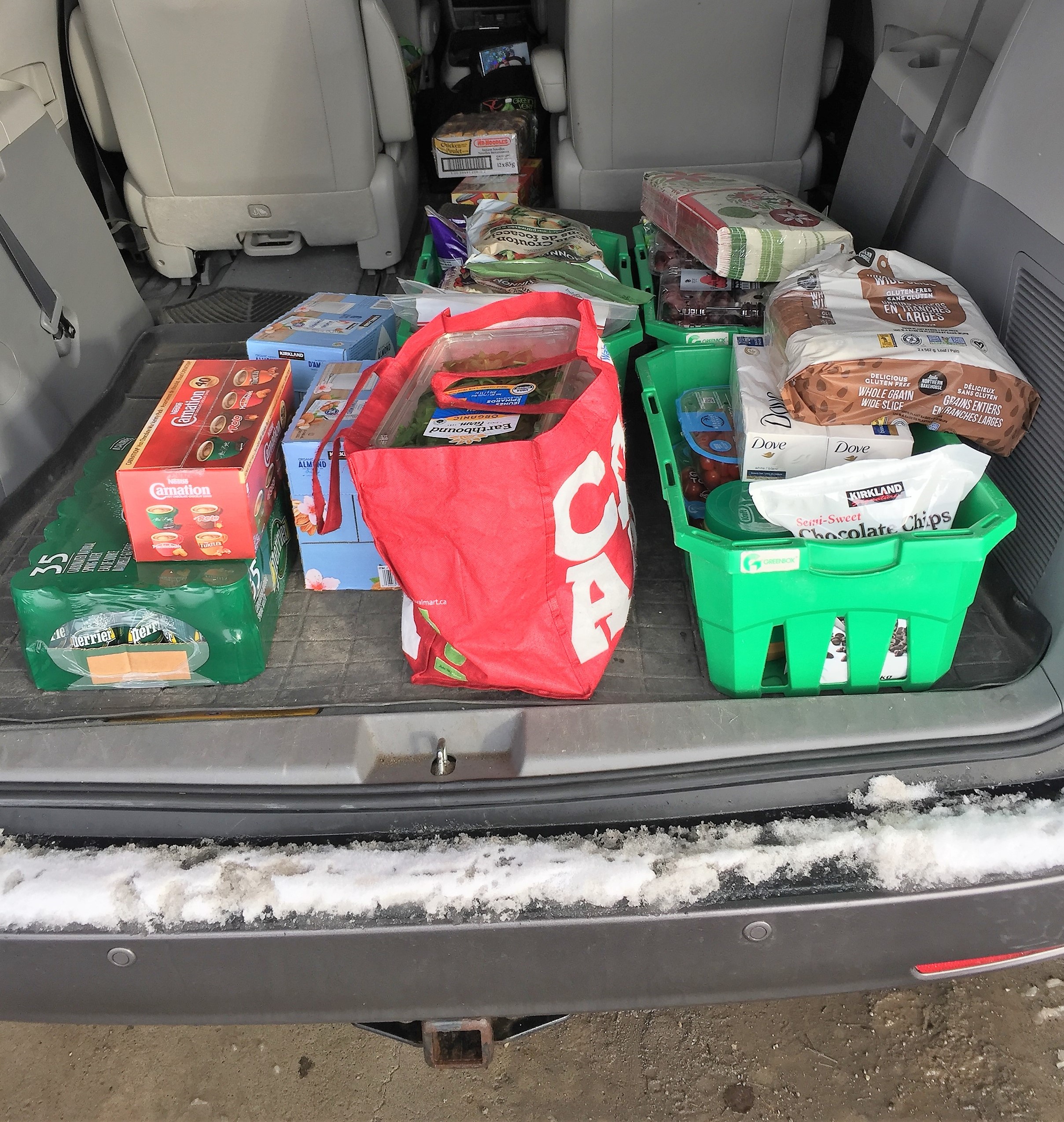 Pushing the cart aside, the biggest problem with grocery shopping during the day is that no one is home to help unload the car and put things away; it took a solid 50 minutes of non-stop work to do this. Who needs to go to the gym when you can just provide food for teenage boys?

Oh, the life of a domestic goddess. Last Friday I was having coffee with my friend Janet (HI JANET) when I noticed that the clasp of my beloved Christmas bracelet had come undone, and my little Christmas tree was missing. I checked my clothes, the coffee shop, the car…and then came to the sad conclusion that it was gone forever, probably lost in the snow. I taught my class and sadly came home; I washed the dishes in the sink and when I took the dish gloves off there was a little clunk on the floor – my Christmas tree! Of course! I had washed the dishes immediately before leaving the house, because apparently washing dishes is a huge part of my life, and the clasp must have come undone then. I was so thankful that the little tree didn’t go down the drain, or that more charms didn’t fall off the bracelet.

Luckily the clasp didn’t come undone when I was out mailing a card. You know the scene from When Harry Met Sally, when Sally is mailing a pile of letters and checks the chute after every single one? That’s me to a tee, and my husband always laughs at me. “It’s on a slant, of course the letter is going to go down into the box.” Well. WELL. I will tell you that the following events vindicated me forever. When I went to mail the card, I opened the chute to see at least six envelopes sitting there. Someone didn’t check! The mailbox was very full, which was preventing the envelopes from going down into the mailbox, and so I did my best to force them down, hoping I wasn’t crushing important things like photos or anything. It was crammed full, and so my entire arm was in the mailbox, trying to coax the envelopes down. I hoped no one was watching me, thinking I was committing mail fraud or theft. I briefly remembered the scene in The Simpsons where Homer gets his arm stuck in the pop machine, and there is discussion of amputation, when it is revealed that the reason his arm is stuck is because he will not let go of the can of pop. What if my arm gets stuck in this mailbox. Will I have to be rescued. If so, will the fire department arrive. If so, is it worth getting my arm stuck.

Speaking of pop machines, when I was at Costco for my Epic Grocery Day, I noticed that the pop machines were all equipped with credit card readers. Does no one carry change anymore? What an age we live in.

It was another weekend of treat-making to wrap up the season. I am now DONE. I think. There was a party at the studio and so I made cupcakes: 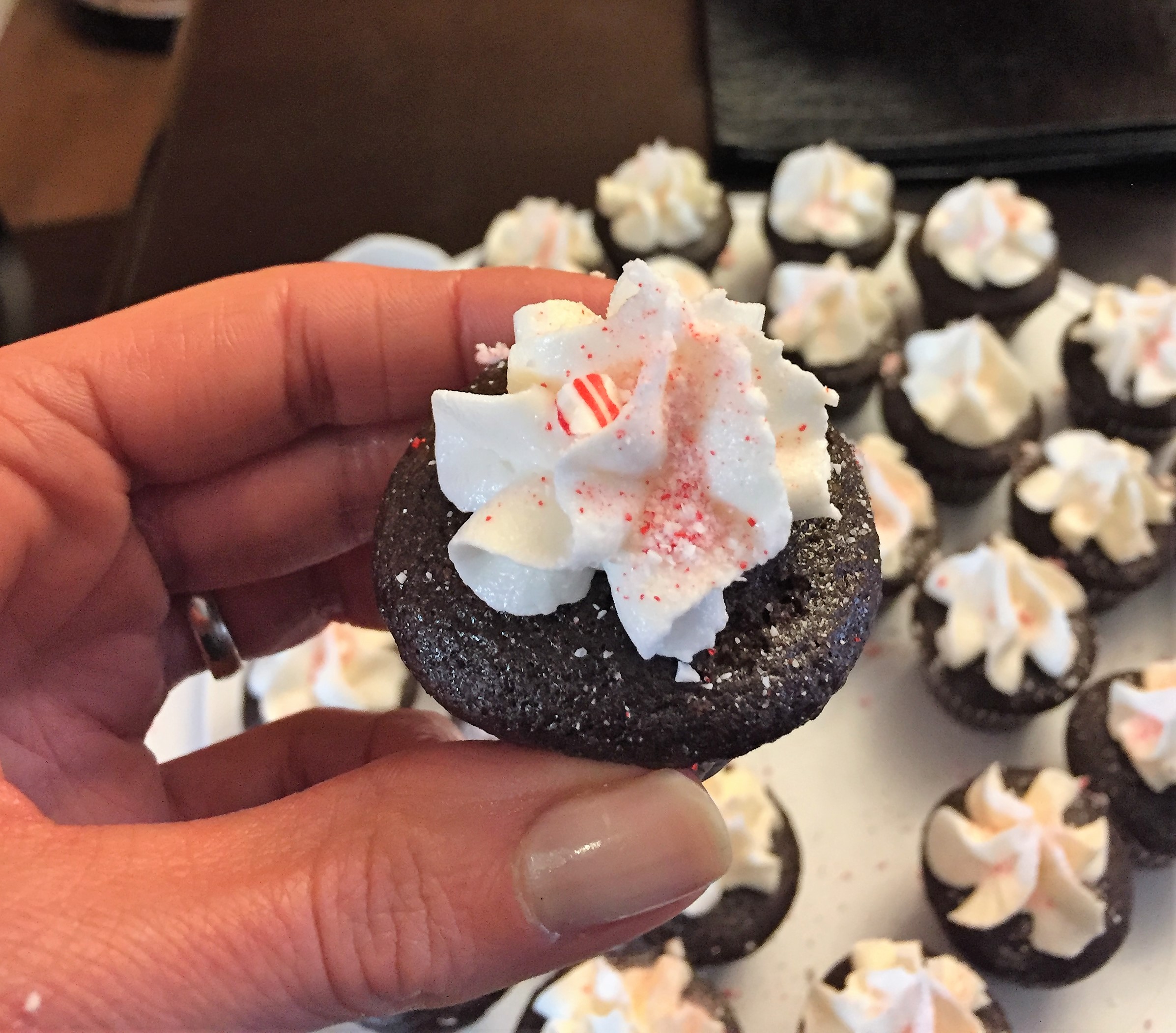 Because it was a yoga party, I wanted the cupcakes to be vegan. In the past I’ve used coconut oil to make vegan frosting, but it is not exactly ideal. For one thing, it either seizes or melts, and there is always a residual coconut taste, unless I use refined coconut oil, in which the taste is too bland. So, I bought a hippie vegan butter (or, “butter”) and I will tell you: I had my doubts. For one thing, after I had left it on the counter, as I would with regular butter, it was so soft that I had to scrape it out of its wrapping. It also tasted a lot like I Can’t Believe It’s Not Butter. But I am here to tell you that it was the absolute best for frosting. I didn’t have to add any “milk,” it whipped up into perfect creaminess, and it set up nicely. It was much easier to work with than real butter, and much better tasting than coconut oil frosting, I Can’t Believe It’s Not Butter taste aside. I used the remainder of the decimated candy canes to make it festive. 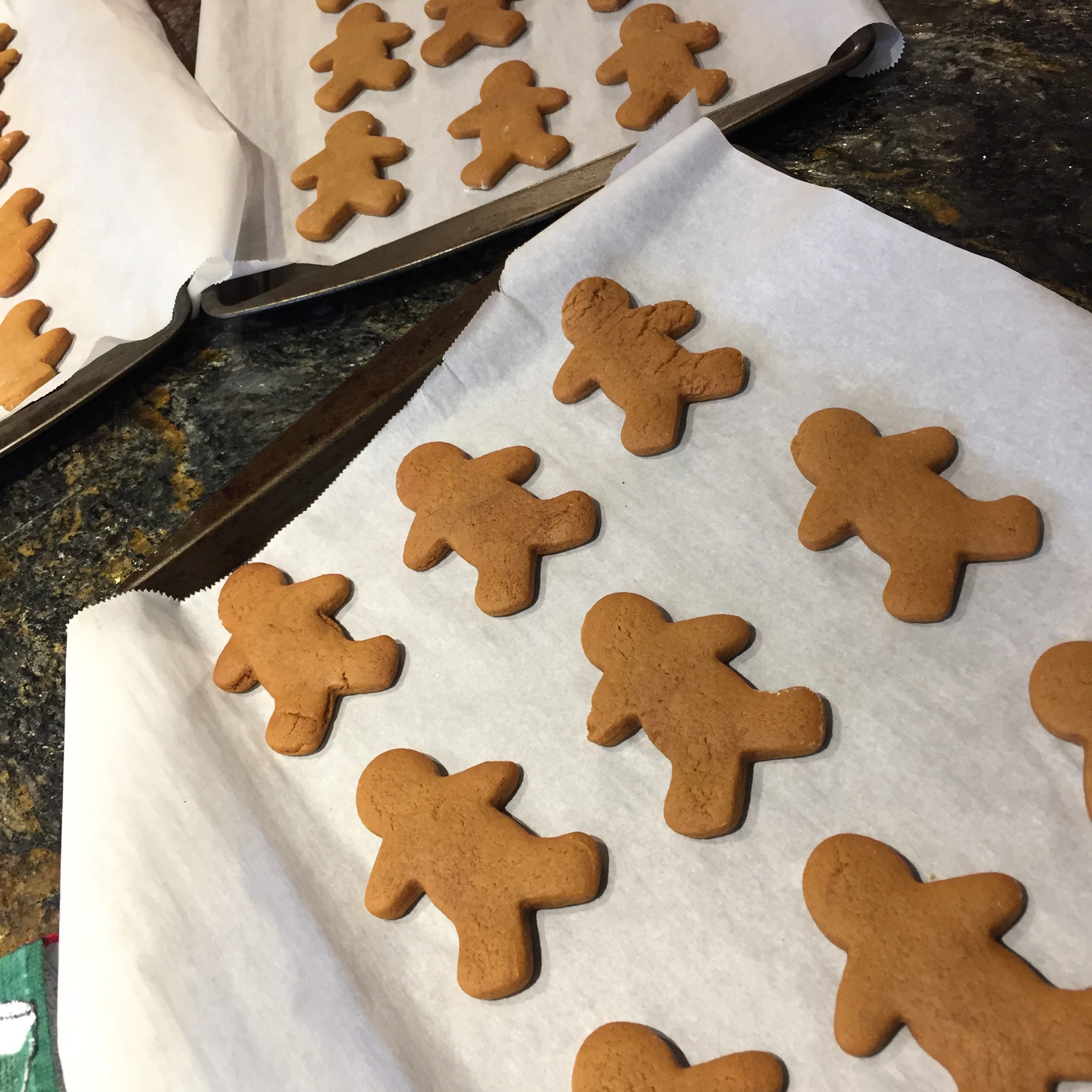 I baked 115 gingerbread men on Thursday for Friday decorating with the boys, and it went exactly as expected. 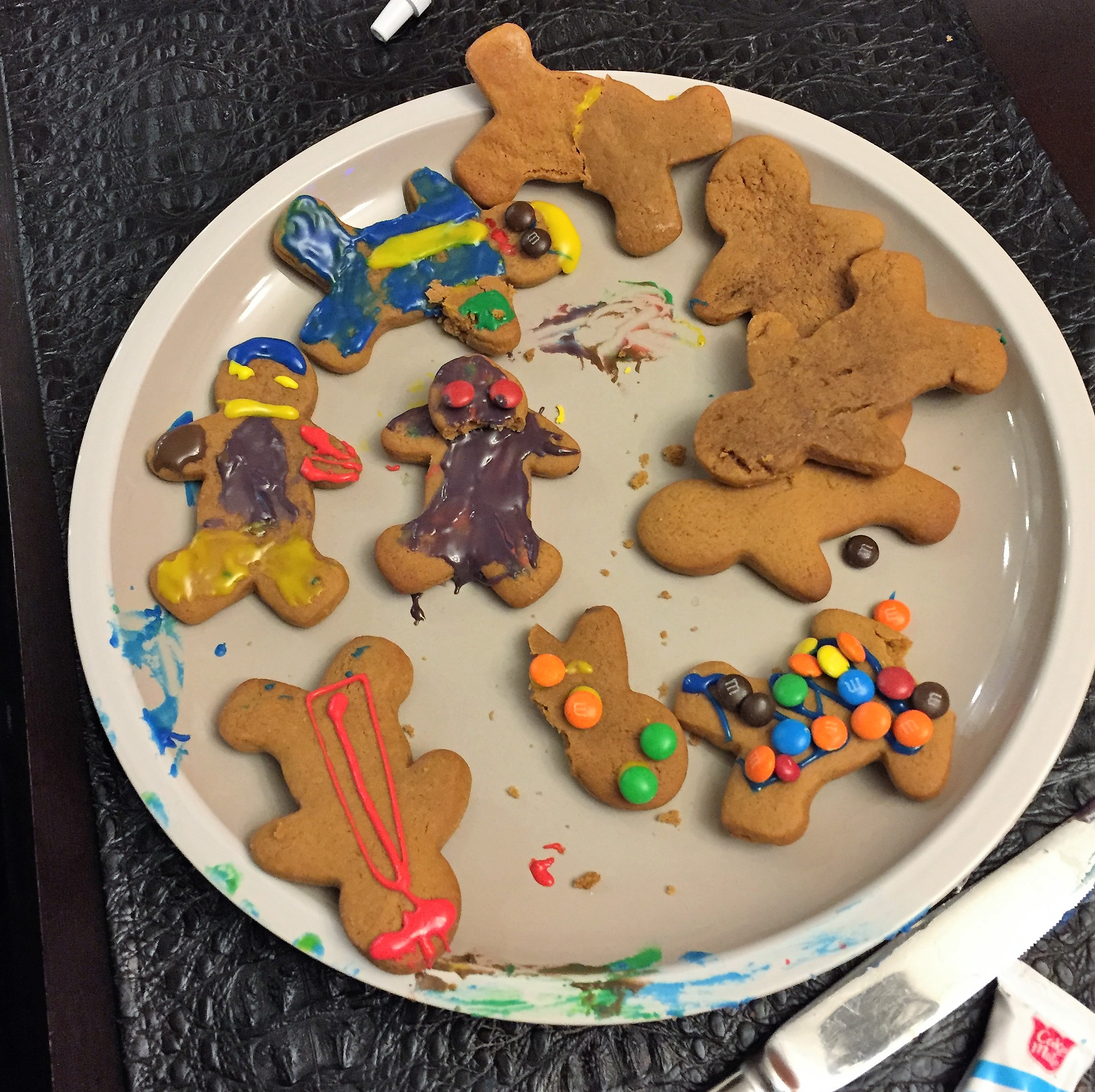 Sometimes it’s better not to ask questions, you know? 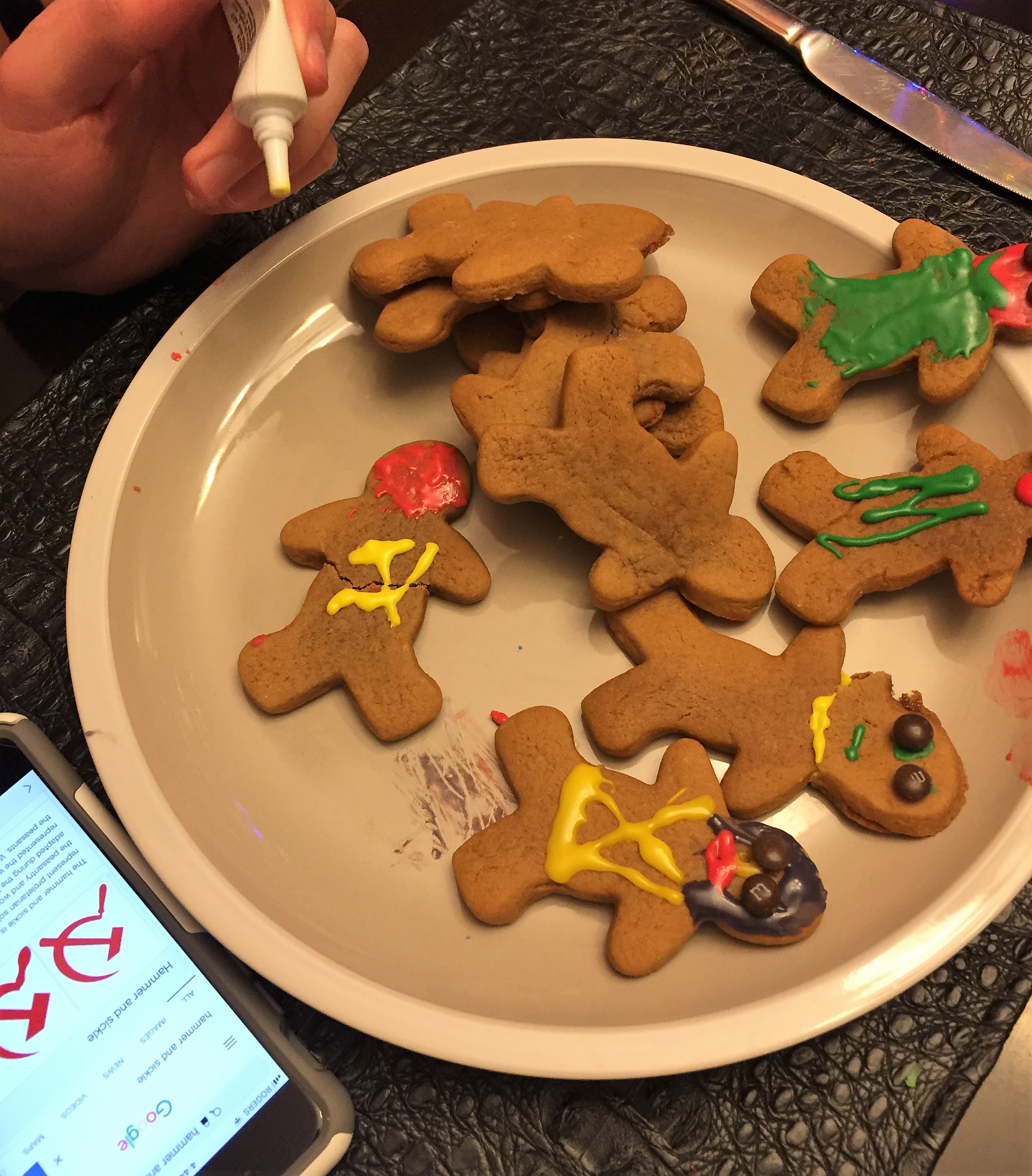 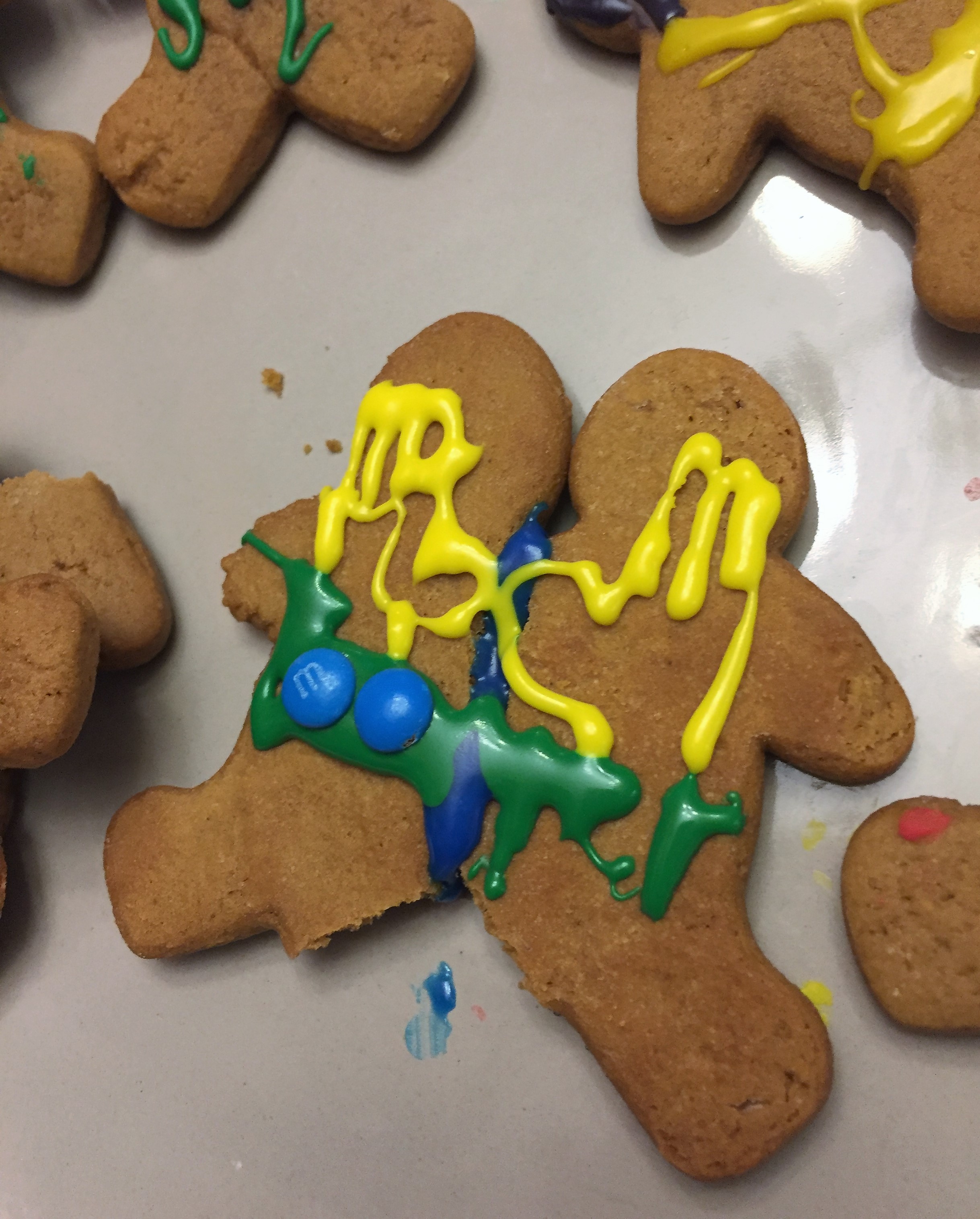 This is “Okay Boomer” cookie, which the boys say to each other, and also to me. “I’m not a Boomer!” I’ll say, to which they respond “Okay Boomer.” 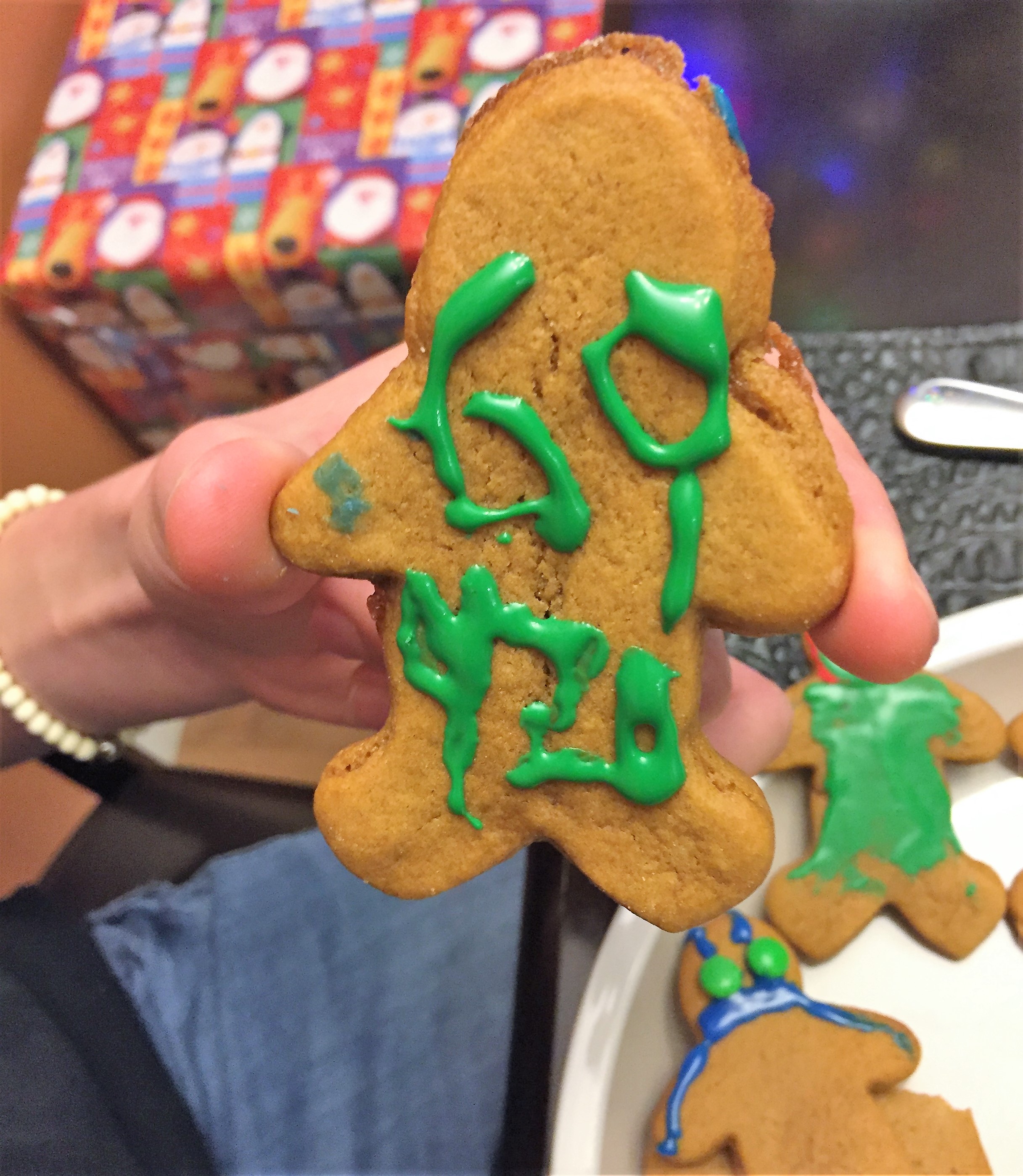 Well, I think we can all read what that one says. 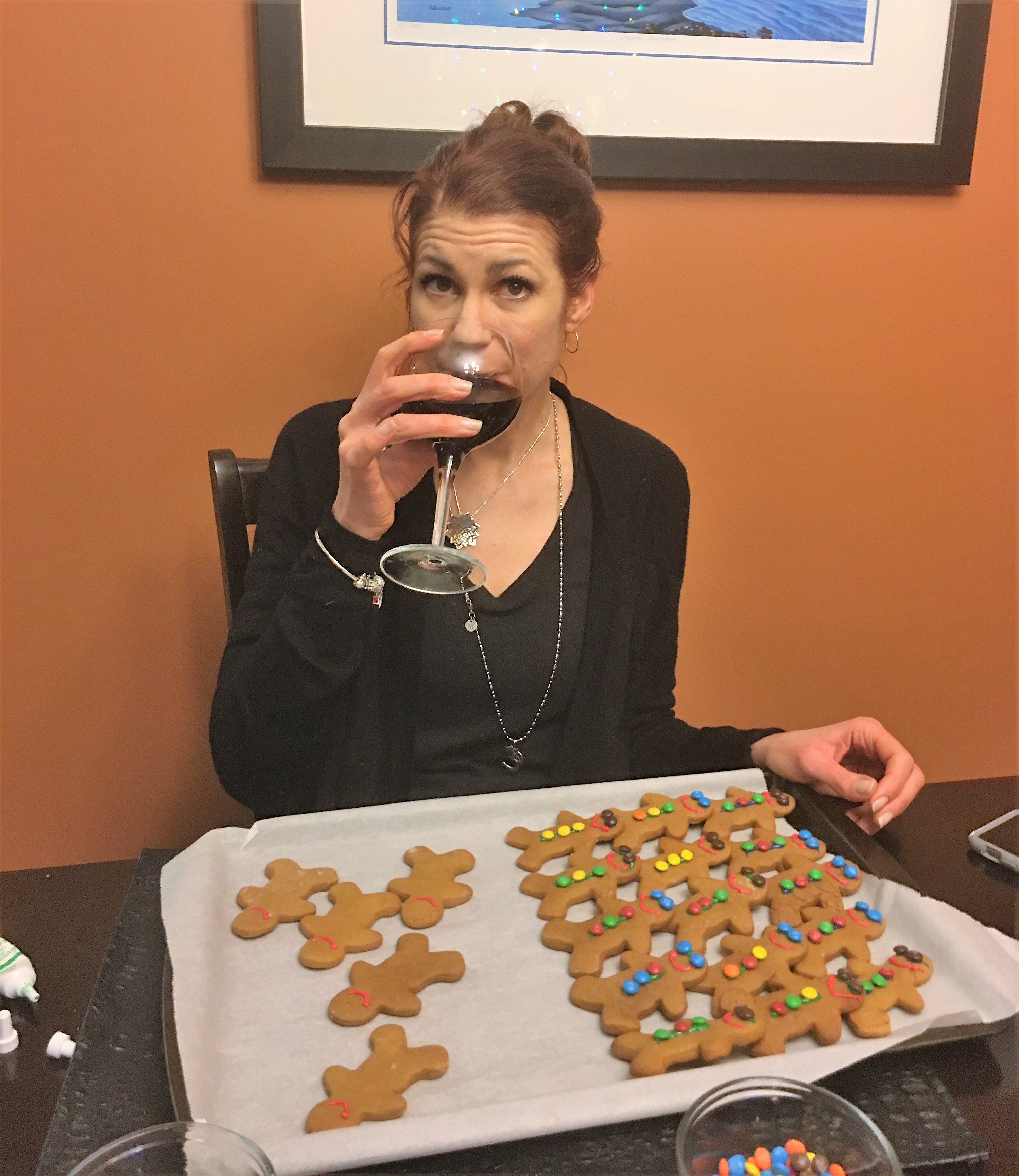 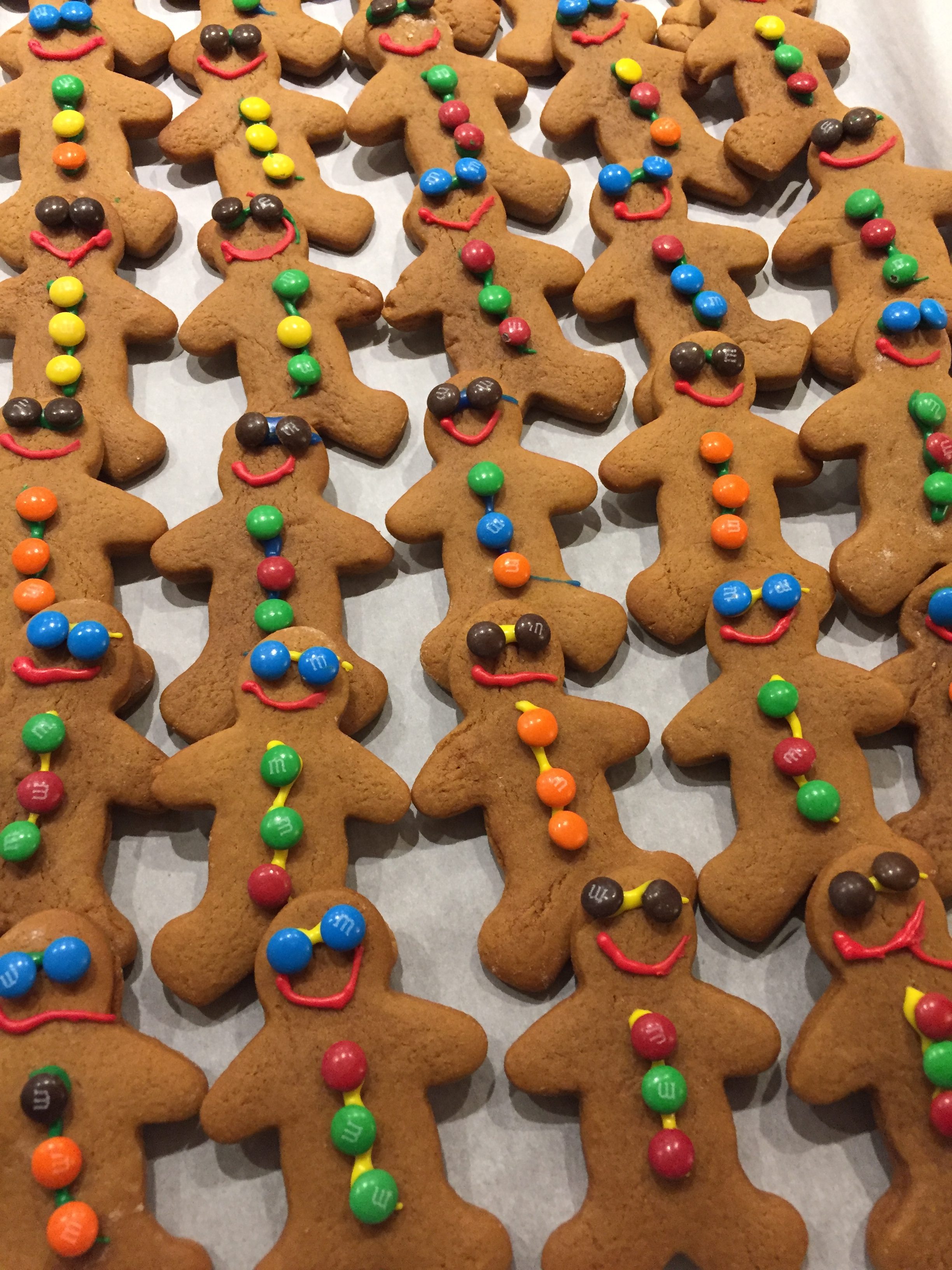 My army of gingerbread men. I would like everyone to note that a) mine are the only ones that actually get eaten, as no one can stand eating as much artificial icing as the boys put on their cookies, and b) I am a machine. Of the 115 cookies, the vast majority are exactly like this. We will assimilate you.

Here’s to a – maybe? – slower, quieter week. Only one week until Christmas Eve! May your days be merry and bright, friends, and cookie-filled too. xo