After declaring vehemently that they were Too Old Or Possibly Just Too Tall for Trick or Treating, my kids are now waffling a bit. In an unusually sensible and brilliant turn, the CBE has declared tomorrow to be a PD Day, which I think should be the case every year. Too long; didn’t read, my kids are planning to wander the neighbourhood with their gang – possibly Trick or Treating, but who knows, really – and then sleep over at a friend’s house, and all I can say to that is god bless that mother for allowing eight teen boys hepped up on candy and general feelings of Halloween festivity overnight. She’s a better woman than I.

My younger son headed to school today dressed as Slash, and I have to say that it is the single greatest costume to ever come out of this house. Perhaps it is the single greatest costume to ever come out of this city; who knows. When he was at the orthodontist last week, my son shared a photo of himself in costume. The young, hip, non-criminal orthodontist suggested that the costume would be Even Better With The Addition Of A Smoke, and so my son purchased a couple packs of Popeye candy cigarettes yesterday to complete the look. Of course, they are called “candy sticks” now, rather than cigarettes, but I think we all know the truth. Sadly he was unable to use either candy cigarette or sunglasses for his school costume, due to rules and dress codes. I’m sure all the candy sticks will be enjoyed by him and his friends this evening, and I will gladly accept my Mother of the Year award, thank you.

Mother of the Year got into the Full Halloween Spirit this morning before going to teach my Thursday class: 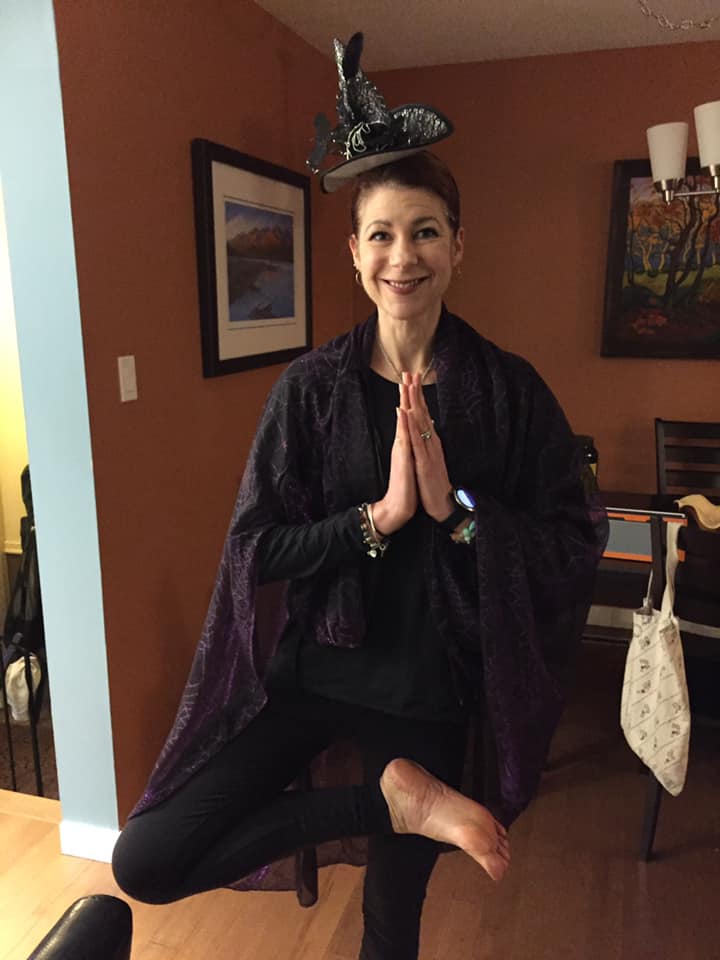 “I thought you were joking about the costume!” one of my students said, referring to my comment last week that the class should “feel free to wear costumes!” Sir, I do not joke about such things.

Meanwhile, there is one Halloween ritual that the Boyhouse is not participating in this year: carving pumpkins. No, it’s not because of the Great Pumpkin Shortage of 2019 that this city is experiencing and that has been reported on by several news outlets. I purchased two absolutely perfect pumpkins a couple of weeks ago, but my hyper-organization skills backfired, as it was MINUS TWENTY DEGREES WITH WINDCHILL on Monday, and the pumpkins are now a post-severe-freezing pile of mush that cannot be moved from the front steps without extremely gross results. The bitter cold and gusting winds also did a number on some of our decorations; last night was relatively mild and so my husband and sons were out in the front yard, in the dark, fixing them and putting up all our new ones. My sweet friend Denise (HI DENISE) even loaned us her fog machine for tonight, but right now it’s snowing again, so I’m feeling despair and dread that All Will Have Been For Naught. In addition to the full-sized chocolate bars, I have made up fifty little treat bags, and I have a feeling that if we get any Trick or Treaters at all in this weather, it will be greatly worth their while.

My husband JUST THIS SECOND texted me: “Calgary is an asshole.” He must have looked out the window.

Speaking of assholes, is Mercury in retrograde? Yesterday I went to Costco and then to Superstore, which is like the Extreme Boot Camp/ CrossFit of grocery shopping. It’s never a particularly fun experience to be in those two places back-to-back, but just like any exercise, while I might not be glad to be DOING it, I’m always glad to have DONE it. However, yesterday devolved from “not fun” to “omg what is even happening.” Usually there is something nice about Costco/ Superstore: occasionally I’ll see someone actually returning a cart, or letting a mom with a baby go ahead of them in line, or I’ll have a nice conversation with someone about an obscure item in their cart. Yesterday people were constantly merging their carts in front of me and then abruptly stopping in the middle of the aisle, blocking traffic in both directions, for no discernible reason. This happened at least twelve times, and at no time were those people actually looking at an item on the shelf or getting a Costco sample or even stopping just to let someone else through. No. This was just random stoppages FOR NO REASON.

I wondered if it was me, if I was just in an irritable mood or hyper-sensitive to the oddities around me, but no. In the parking lot I witnessed a person aggressively swing into a parking space another person was waiting for, even though there were MANY parking spaces available. An elderly man yelled at a woman packing up her groceries in Superstore, saying he couldn’t get past her and would she just MOVE already. As I unloaded my groceries into the car, a loud and long honk sounded, and when I looked up I saw a van rapidly backing out of a parking spot, missing by mere inches another car that was also in reverse.

I just checked: Mercury IS in retrograde, but starting today, so that doesn’t explain yesterday at all.

I feel like I need a Mercury-in-retrograde excuse to just allow myself to be exhausted and not do anything. The past four weekends have been jammed full of activity; actually, that has been the case for the past couple of months. Last weekend I was on the go pretty much constantly; all for good things and good reasons, but hoo boy, do I need a bit of a break. My husband asked if I wanted to do anything this weekend, and at the moment sitting on the couch and drinking wine while reading and possibly watching Diners, Drive-Ins, and Dives sounds like a plan. I’m not even sure I have the attention span for something as intellectually challenging as Family Feud.

Happy Halloween everyone! Hope you have enough treats to indulge in some yourself! May I suggest some Rockets? xo