There is no need to remind me that today is actually Thursday; however, this is how I have felt over the past couple of weeks: 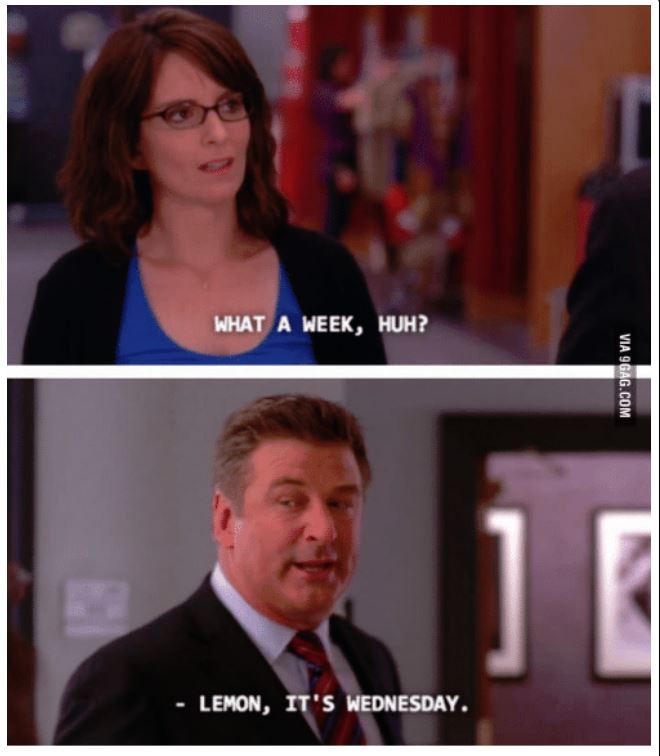 On Monday I cheerfully mentioned to my older son that if he was having issues with his F chord, he could ask his guitar teacher at his lesson the next day. His guitar lessons are on Thursdays. By Wednesday, over the last two weeks, I’ve been ready to collapse on the couch with a bottle of wine and a funnel only to realize that no, it isn’t Friday, and not only did I have to Just Keep Swimming, I also had to take my younger son to drum lessons.

Remember the young girl who teaches voice lessons, who changes her look dramatically week to week? A few weeks ago I anxiously awaited her to come out and talk with one of the parents, and I was rewarded by her new look: a shaved head, army boots, and what appeared to be a karate gi. Maybe her head is always shaved and she wears different wigs every week? That would explain a lot of things. Last night she had on one of those golf-style hats that are favoured by old men on her shaved head, a gigantic Club Monaco sweatshirt over top a turtleneck, hugely wide-legged high waisted cropped jeans, and white faux fur open-toed mules.

I don’t mind at all waiting for the kids at their different music lessons; I bring a book and use the time to read, or contemplate how one person can have so many different styles from week to week when my own style has been virtually unchanged for many years. Either way, I amuse myself. There is one dad there who has two young children that have lessons not concurrently; he’s there at least an hour and he never, ever has so much as a book or a phone. He merely stares into the distance, mostly ignoring the child who is not currently taking a lesson, and who is constantly whining about how bored he is. Now, I get the concept of allowing your child to sit and be bored for a few moments, there is no need to be constantly amused by screens or the like, but would it not be possible for the sake of everyone around him to at least bring a book for the child? How much LONGER do we have to waaaaaaait, the child usually says about two minutes after his brother has started lessons. A book! Markers and colouring pages! What a novel concept. Then last night, a woman who I assumed was their mother brought the children to lessons. I didn’t even realize they were there until I noticed the child, who was completely engrossed in a Roald Dahl book, rather than complaining loudly for thirty minutes. It was a nice reprieve. I am not drawing specific parallels to the rest of the world, but way to go Mom.

Small digression about books: I was reading Feel Free by Zadie Smith, and my husband commented on it. Why was I reading that? What is it about? I replied that it was a book of essays, and it was okay, not great, but sort of interesting. I started to mention I had read her first book many years ago, back before kids when I was in a book club. She’s a WRITER? he asked incredulously. Other than the time I read The Dead Husband Project, my husband has shown no interest at all in any book I have read, and so I was pretty surprised by his line of questioning. It turns out he was thinking JADA, not ZADIE, which was quite amusing to me. There are no anecdotes about the Fresh Prince in Feel Free, although there are many long essays about paintings I am not familiar with and books I have not and probably never will read.

These last few weeks of school are a strange combination of busy and not busy. The boys have only half days of school every day for two weeks, with the exception of last Tuesday, which was Field Trip Day and found them at the zoo and the science centre. The half days are ostensibly designed to allow for studying for finals. The grade nines are all taking their provincial achievement tests, and the grade eights have a couple of finals as well, but the majority of the time appears to be consumed by movie watching and, in general, nothing at all. Everyone seems to be mailing it in right now. Today as the grade nines write their math PAT, the grade eights are having a barbeque.

Strange as it might seem to have a barbeque for the entire eighth grade at ten in the morning, that’s nothing compared to the request to “bring your own meat.” Just think of the logistics of this: one hundred and fifty thirteen-year-olds all bringing in a single hamburger, or hot dog, or chicken breast, with no refrigeration facilities. Last year I thought this couldn’t be the case, the school couldn’t possibly be endorsing such a potentially food-poisoning-infused activity, but the morning of the barbeque my son begged to take something, anything to school. Everyone’s taking something, Mom! He ended up taking a single sausage, which was the only barbeque-able piece of meat in the house, which subsequently got eaten by someone else. This year I gave my younger son a whole pack of hot dogs, buns, and a couple of nearly-empty condiments; at least this way he and his friends are provided for, hopefully without salmonella.

Today is the teacher luncheon at the school, and as I have been pretty much a lame duck in terms of volunteering for these junior high years, I offered to bring dessert. Specifically, mini cupcakes. More specifically, the fussiest, most time-consuming labour-intensive dessert that I could possibly make for a large crowd. Why do I do these things to myself? I could have made a pan of brownies and called it a day but no. The cupcakes turned out great, but I will just say this: yesterday was a pretty frantically busy day without making five dozen tiny cupcakes frosted with roses and stars, so adding that on top of things was perhaps not that bright. I’m pleased with the final result, though, and even more pleased that tomorrow is Friday and my friend is coming over in the afternoon for a much-needed wine break. 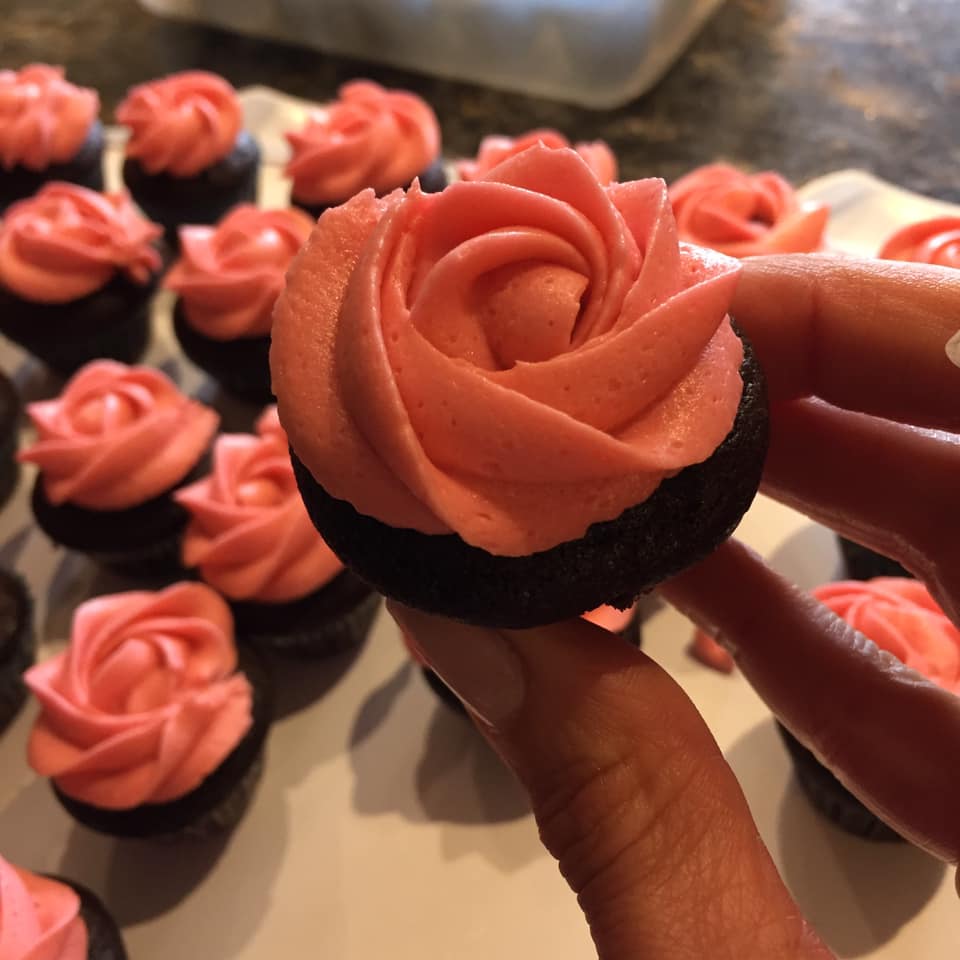 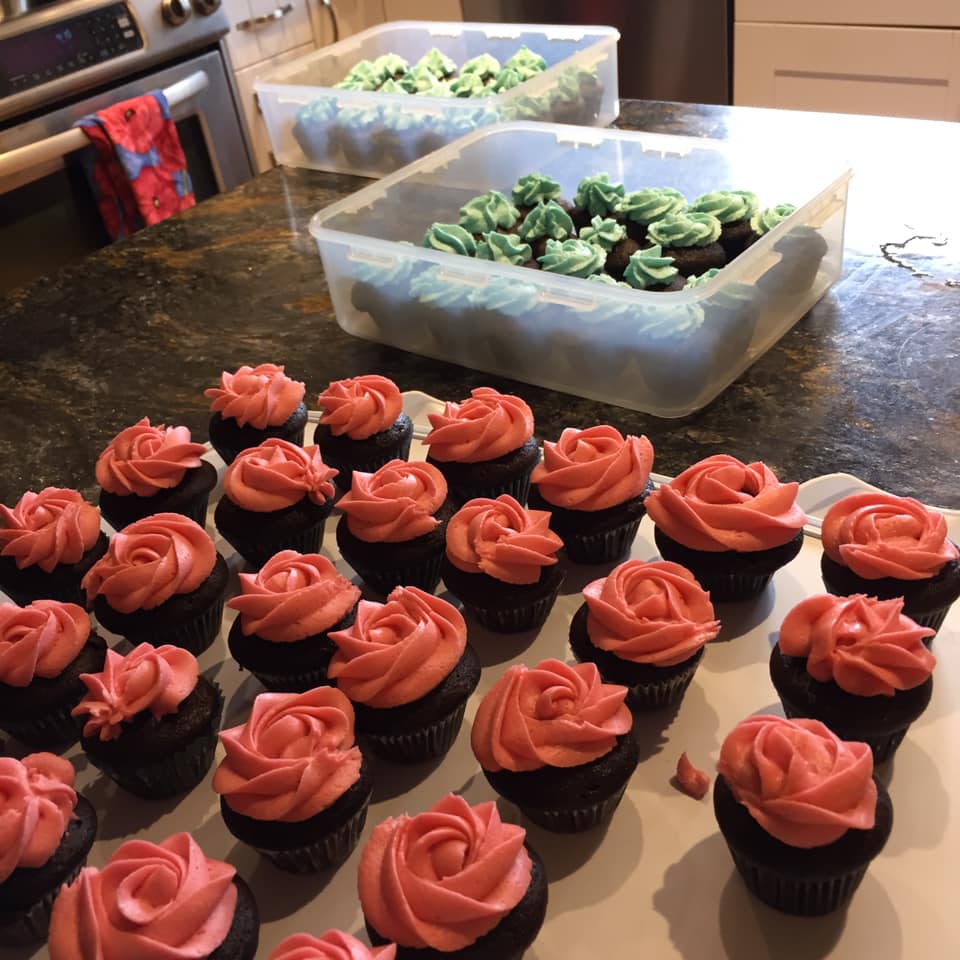 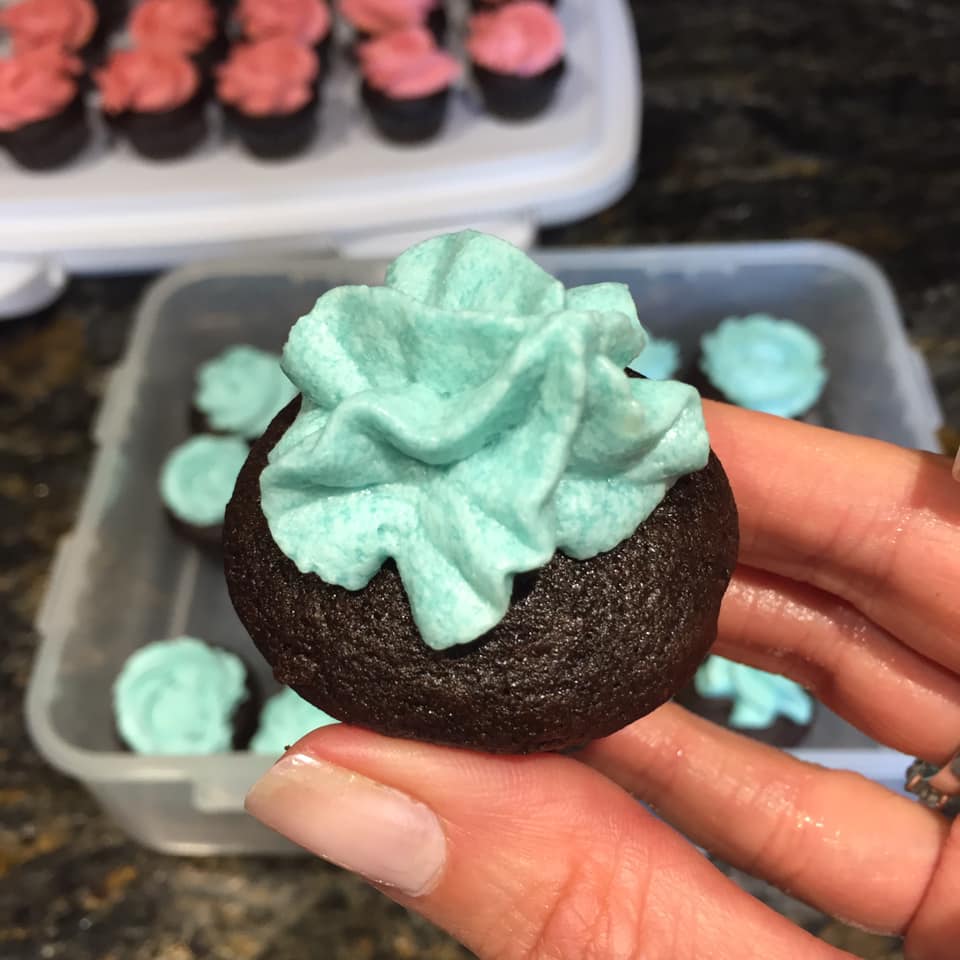 I excitedly texted a photo to my husband, who expressed extreme doubt that I actually made these myself, given my very poor track record for decorating baked goods. But I did! I did make them! You could too; all you need is the right decorating tips and a YouTube video. I told this to my husband, owner of a whole workshop filled with every tool you can imagine, and he nodded with great understanding. The right tools are EVERYTHING, he agreed. Indeed.