Search
Menu
Categories
‹ prev next ›
1
Nicole’s Favourite Things: The Yes, There Are Good Things About February, We Just May Have To Dig A Little Deeper Edition
February 25, 2019 Nicole Boyhouse Books

You guys, this month is on track to become the coldest February since records began. SINCE RECORDS BEGAN. What is this madness? Every winter there comes a time when I intellectually know that there will be a time and a season after this, but emotionally I cannot register it. Like, it’s just going to be winter forever now, like we are in Game of Thrones and the White Walkers are going to come and kill us all or turn us into similarly zombie-like creatures.

Recently I discovered that some people have a favourite season, and that favourite season is winter, and I just cannot at all comprehend it. We are all different and life is a beautiful complex tapestry, but how is that possible? I suppose winter is different in different places, perhaps instead of months on end of spending a solid five minutes just getting enough outdoor clothing on to dart from the door to the car, it’s a soft wonderland of fluffy snow and moderately cold temperatures, that end in an actual spring. Well, we can dream, and although there is no end in sight to this frigidity, I will remind myself that I am not waiting for the trains to get through, living in danger of starvation and ruining my hands while twisting hay to burn.

Anyway, on to more positive things. March begins THIS COMING FRIDAY and at some point, although I cannot imagine it right now, at some point the snow will melt and my sunglasses won’t freeze to my face the way they did yesterday, when I walked the dog. February has the reputation of being a very drab month, but it has really flown by. I mean, the orthodontist mess was only two weeks ago! Poor February, it’s not its fault! It’s a good time to review some favourite things for this month.

Nicole’s Favourite Things: The Yes, There Are Good Things About February, We Just May Have To Dig A Little Deeper Edition

It seems that as soon as the Santas and reindeer disappear from the shelves, there are hearts wherever we look. I love hearts! I heart hearts! So it’s a great time to think about heart-shaped cookies and cakes, and – as of February 15 – price reduced boxes of chocolates. My husband does not give me anything like that, but he did present me with this run top: 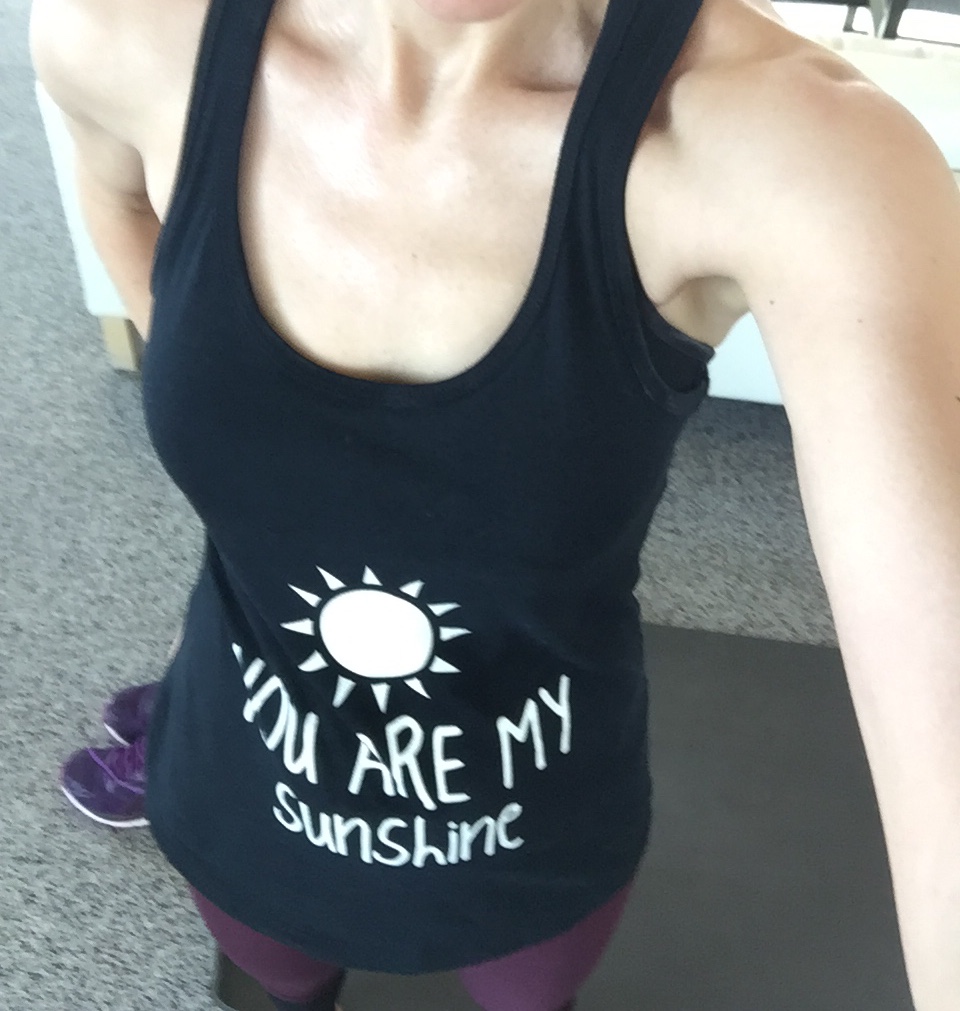 Isn’t it cute? The photo is a bit blurry because I had just finished a run. Some of you may remember that last year, he gave me a run tank that said Bee Mine with a picture of a bee on it, which was life-affirming in every way.

Speaking of chocolate, I still had half a box of After Eights left over from Christmas; I chopped them up and added them to one of our favourite desserts, chocolate mousse pie. It was A VERY GOOD IDEA. If you have some leftover chocolate, or want to use up some cut-rate Valentine’s goodies, this is a fun thing to do. 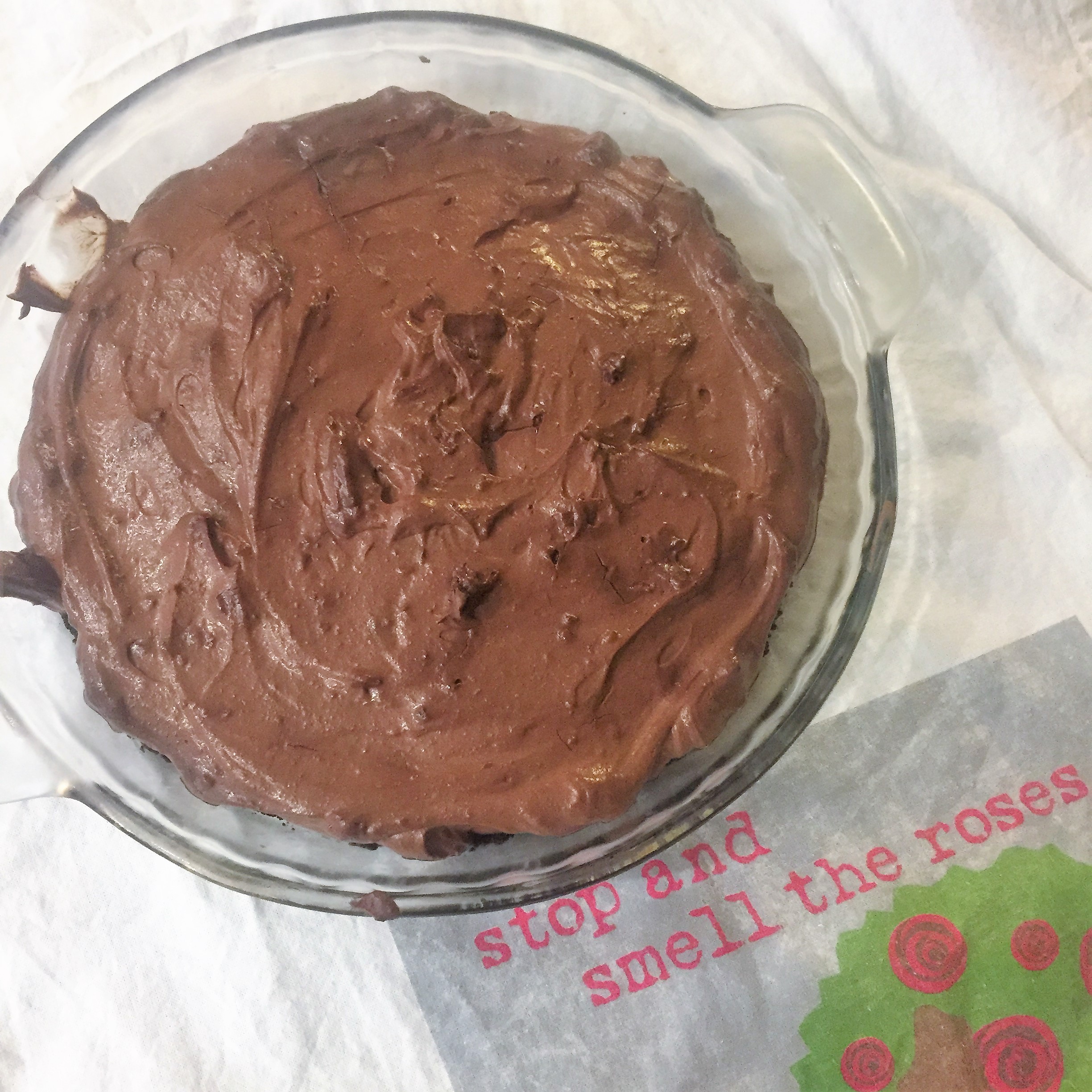 Isn’t that tea towel cute? I think I got it from Bed Bath and Beyond on a nice little Saturday.

I also made this cake on the weekend – I didn’t use leftover chocolate, but I did layer it with ganache, chocolate buttercream, and raspberry filling, and it was extremely tasty. I’ve been trying to get comfortable with my frosting tips, and although I have a long way to go, I’m slowly improving. 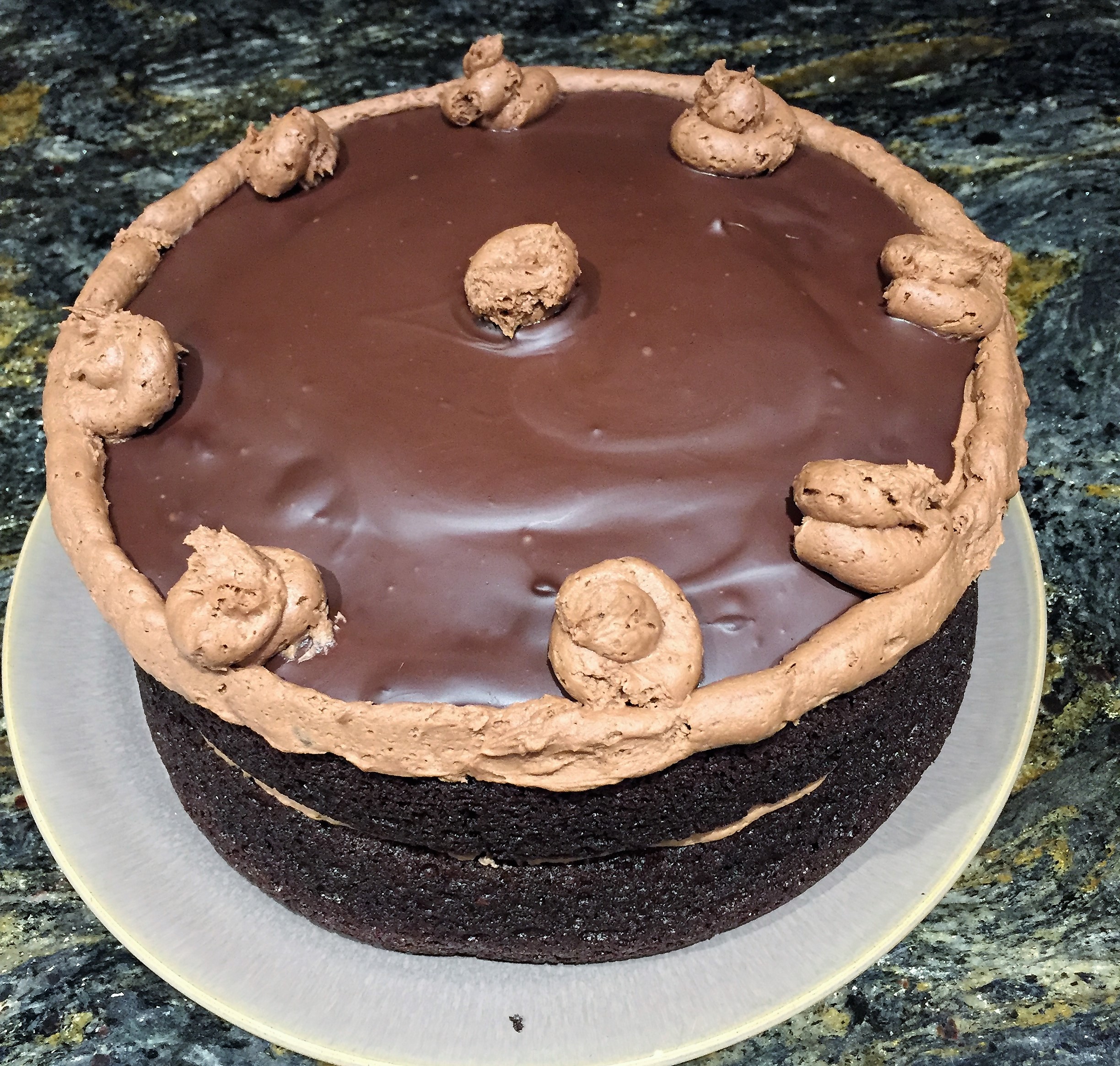 Another recent chocolate dessert was this dairy-free version of my mom’s eclair recipe, which she had gotten from a cookbook that she had in high school. I used coconut oil instead of butter, and whipped coconut cream, and everyone loved them. 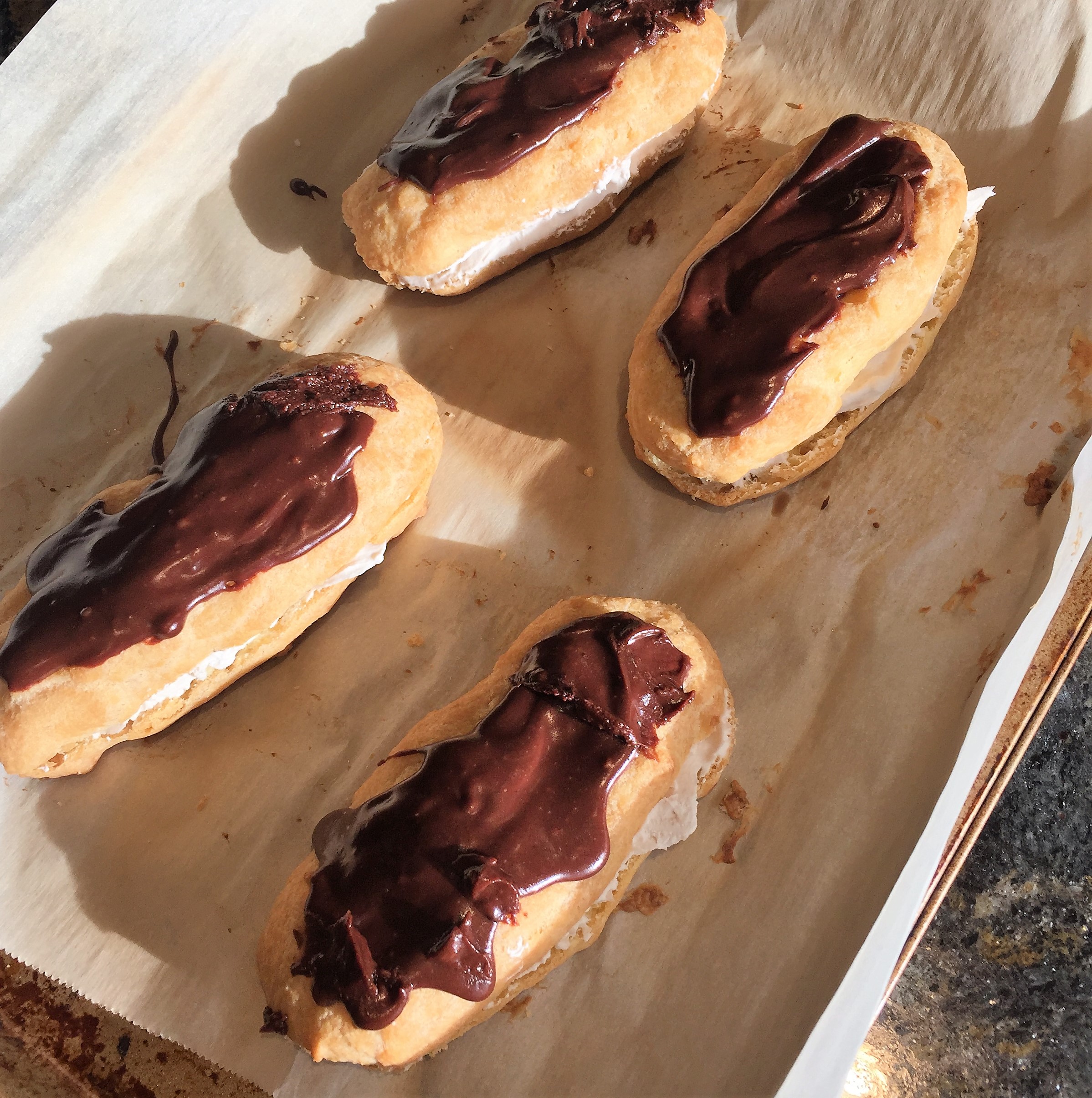 Let’s segue from chocolate to produce, shall we? Is there anything more exciting than seeing the price of produce decline? Probably. But it is a pretty big thing in my life, given how much money I spend on fruit and vegetables every week. It is sure not spring here but it must be somewhere because asparagus is a third of the price it was in January, and just today I was able to buy four pounds of strawberries without feeling faint, particularly since four pounds of strawberries are going to last us between two to three days, if we are lucky, and by “we” I mean “me” because no one else grocery shops in this house. Roasted asparagus though! It’s a promise that spring will be…well…not right around the corner but coming someday. And it’s also on the fast track to Flavour Town.

My friend (HI TARYN) and I have a running joke about Guy Fieri. Sometimes, because we are wild people, my husband will flip the channel to Diners, Drive-Ins, and Dives on a Friday night. I know! Usually by the time he does this I’m either half asleep or half cranked from drinking wine on the couch, but when I see a few minutes of it, I enjoy it. Don’t get me wrong: I find the food featured on it universally disgusting. I spend a lot of time saying My god, how can anyone eat that? but that’s pretty judgmental of me since many people do, voluntarily, and with much enjoyment. However! My favourite part about the show is Guy Fieri’s reaction when he eats the house specialty. He never has a bad thing to say about anything. I really like that. I like that if he doesn’t seem to love something, he merely gives some random description about the food. Wow, there’s a big hit of garlic in this, and I can really taste the cilantro! But if he loves it, it’s a one-way ticket to Flavour Town.

Today I was teaching a class and I noticed one student’s water bottle. After class I asked if I could take a photo of it. 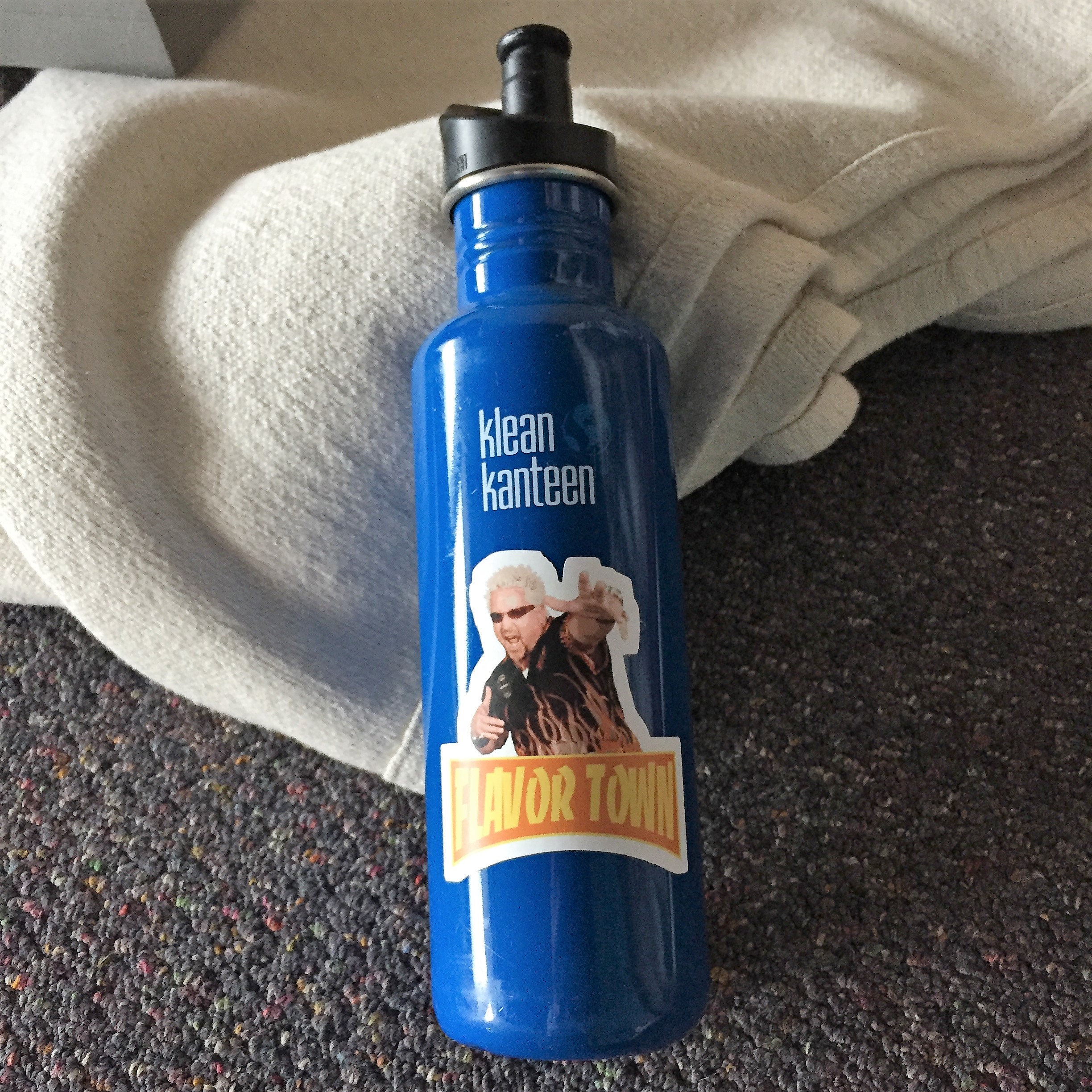 I didn’t ask her why she had this water bottle, I just felt it was enough that it is in existence.

The Year of the Runaways

This book, you guys. This book. Every single spare moment I had, I was reading it. I needed to know what happened, I needed to know how it was going to end, and then when it ended, I was completely bereft. I’m still thinking about it all the time. Can I go back in time and re-read it again for the first time? No. I cannot. I also can’t conceive of what to do now that it’s ended, so I am simultaneously reading Scottish History for Dummies and The Gift of Imperfection: Let Go of Who You Are Supposed To Be and Embrace Who You Are. Why am I reading those two books after this amazing piece of art? They were next on my hold list. I’m learning a lot about William Wallace and Robert the Bruce, I’ll say that. Also, that I should ask for help more often. 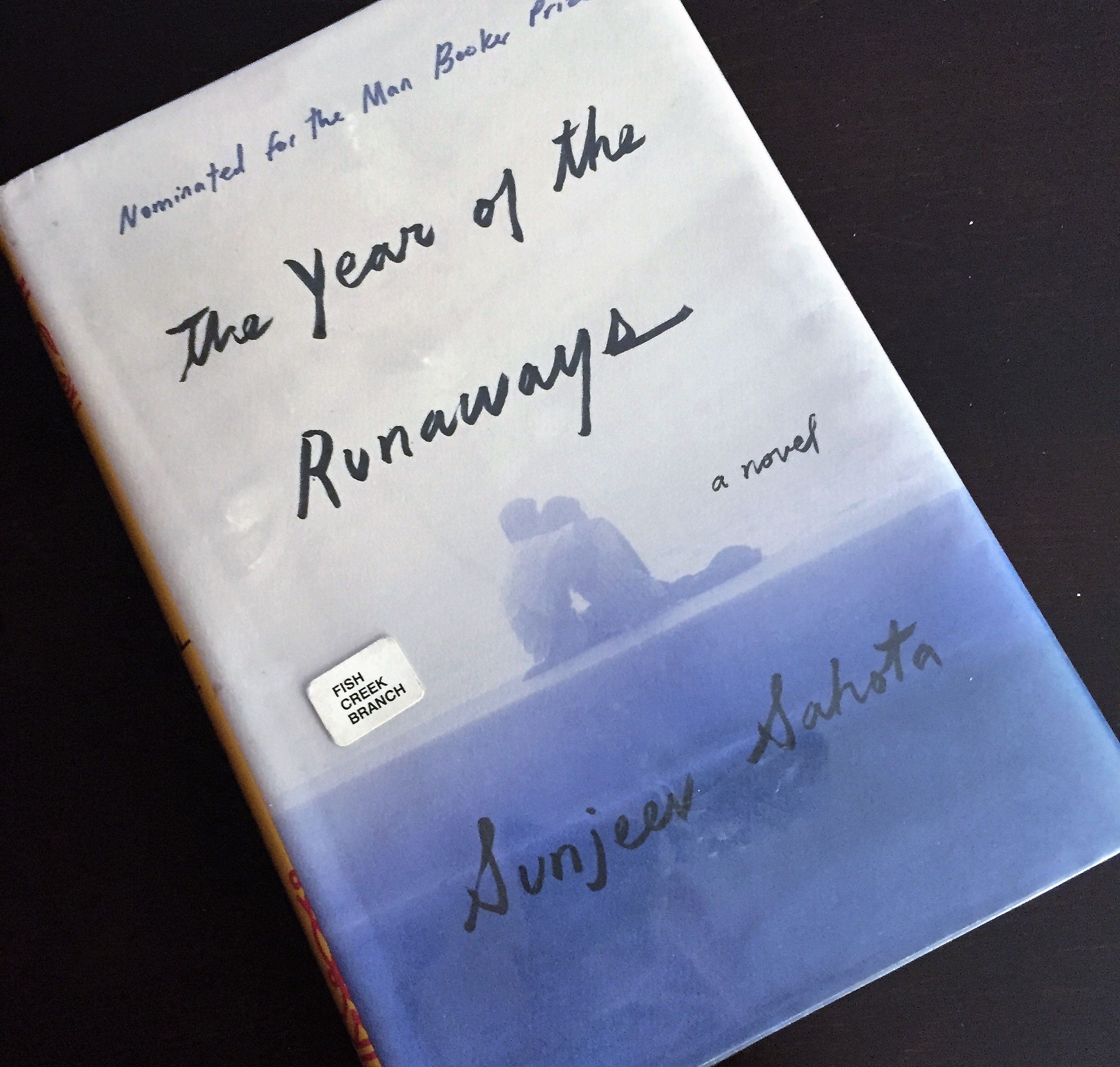 See? Lots of great things about this month; we just had to look for them. What are your favourite things in February? xo