Two days ago I decided to take an enormous leap of faith and wash my calf-length, super-warm parka. I put it in the downstairs closet, along with my Sorels, and I hope that I haven’t cursed us all. I did leave out my other giant, but shorter, parka just in case. It’s my birthday in a couple of days and I keep forgetting, because there is still so much snow and ice on the ground that it doesn’t feel like it’s as late in the year as it is. Don’t get me wrong; snow in April is nothing new, and neither is snow in May. The difference this year is that we still have snow on the ground that was there in October; winter snow, as opposed to spring snow, as my dad helpfully differentiated for me the other day.

Well, I finished Prairie Fires and I am gratified anew to a) not be a pioneer, b) not be the mother of a crazed Libertarian who destroys all relationships, and c) to live in the modern age. I am also gratified that my plumbing and running water issues have – knock on wood a thousand times – been resolved. As I mentioned, the very good-looking young plumber had fixed a lot of things but the water filter was leaking, which required a visit from the very specific Water Filter Guy. The last time the Water Filter Guy was here, said Guy was an older, kindly gentleman who has since retired and left his clients to a new, Startlingly Handsome Water Filter Guy. Seriously, people, I opened the door and wondered if I was on hidden camera.

I always find it interesting, the career trajectories of other people. Was Startlingly Handsome Water Filter Guy always such? No, he was once a high school basketball coach. My own career has changed so much over the years; I find it fascinating how people find themselves in different lines of work. Of course, often the trajectory is more pragmatic, more about paying the bills and flexible schedules and so forth, but still.

School bus drivers, for example. It’s a flexible schedule and probably not badly paid – I have no idea, really – but you would have to be a special kind of person to be able to be in a large motorized vehicle with dozens of insanely loud children every day. Every morning when I drop the kids off at school I see the line of empty buses at the end of the street, and beside one of them is a driver, having a smoke. He wears shorts every single day, no matter what the weather is, with a ball cap and a hoodie, hood up. As I watch him smoke, I think of Otto the bus driver on The Simpsons. The guy just dropped off a bus full of junior high students, he NEEDS that cigarette, people. Obviously it cannot wait, his nerves depend on it. And who can blame him? Not me.

Last week I volunteered on a field trip for the Grade Eight Environmental and Outdoor Education class. Often their field trips are – obviously – outdoor based, but this one was to the climbing wall, and so it seemed to be more up my alley. I am a fair weather volunteer, and the weather has not, as I MAY have mentioned, been fair. I stepped on the bus and did a double take: the bus driver looked EXACTLY like Kid Rock.

Hat, hair, facial hair, clothing, everything. It was really uncanny. I started to wonder if it WAS Kid Rock, and if I should ask him to turn the stereo up and roll the windows down but sadly, I did not. He was pretty calm with the mass chaos on the bus, the hooligan grade eights, and so I was a little disappointed that he wasn’t driving the return bus. Rather, it was an older lady who was the female version of this:

Which, frankly, is completely understandable. It is the exact feeling I get when I’m driving a minivan-full of boys around. Flexible schedule or not, it would be – in my opinion – a terrible job, navigating traffic, the noise level, driving a huge uncomfortable bus.

Volunteering for junior high field trips is very different from elementary ones. For one thing, the bus situation – despite all this – is much better. The elementary school used to have kids three to a seat, even in the later grades, which meant that the bus would be hot, crowded, and extremely smelly, grade five and six students not being known for their excellent personal hygiene. Junior high kids, thank god, wear deodorant and brush their teeth, for the most part, anyway. Secondly, the volunteer gig itself mostly involves just existing, since the kids don’t need help with anything at all. I think the extra parents are just there for insurance purposes, because there is literally nothing to do but stare at the kids for several hours.

I took a few pictures though: 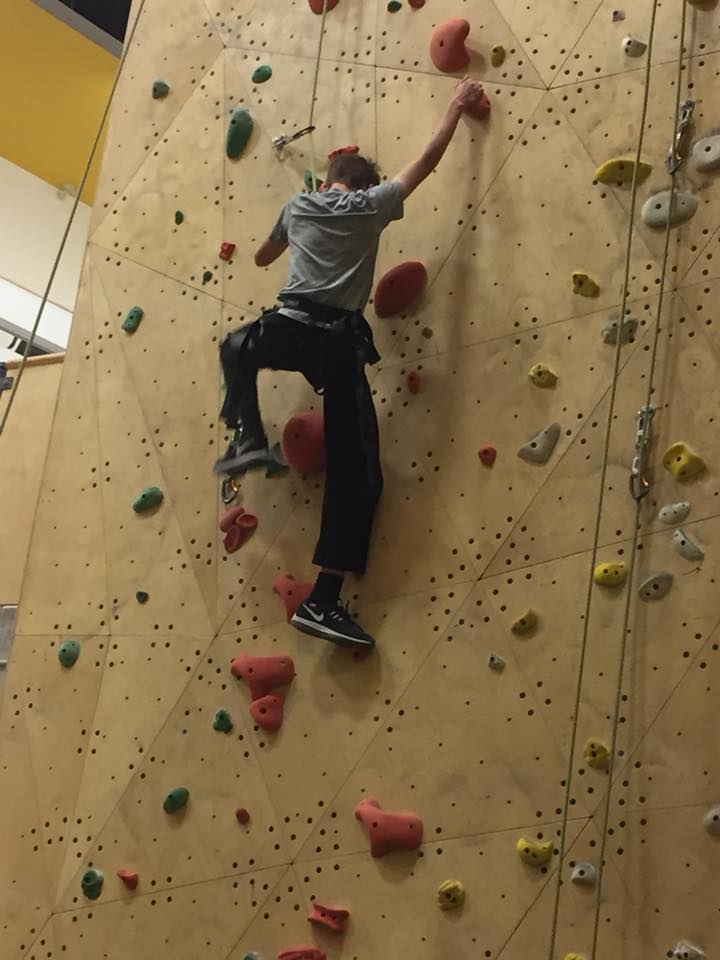 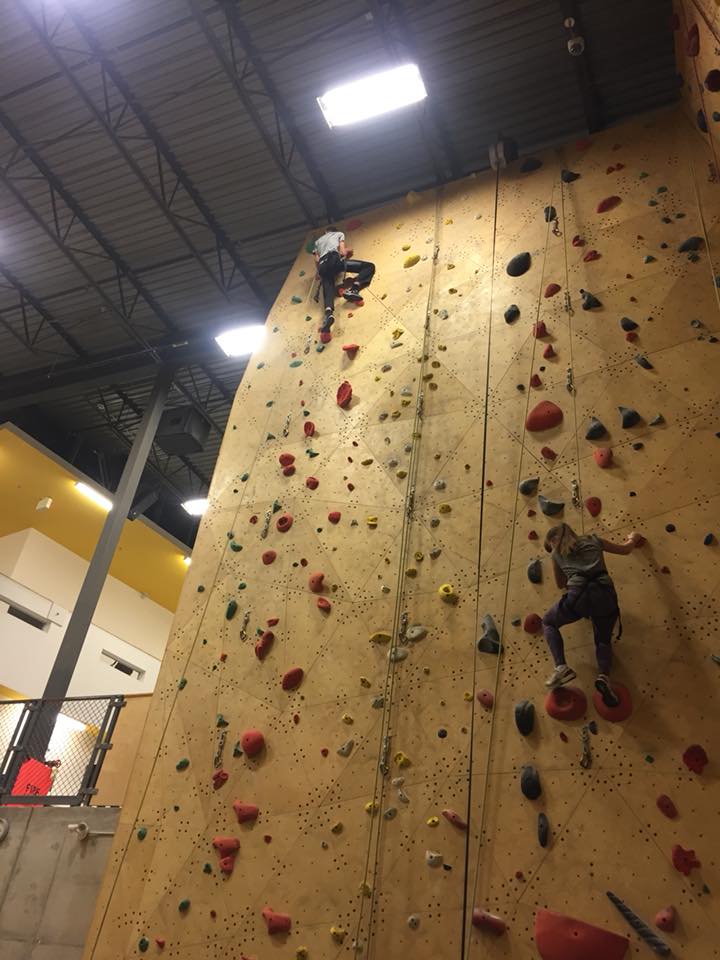 That’s my boy! I don’t tend to be a worrier, but there was a moment when I saw him at the top of the wall, knowing that he was being belayed by another fourteen-year-old who had just learned how to belay twenty minutes prior…well. All was fine. It was like the moment I had in Huatulco, when we took a local boat tour and snorkeling trip. We spotted two whales and some dolphins, and the boat driver – the captain, I guess? – sped out towards them. I thought, here we are, off the coast of Mexico, in a nine-person boat, heading off into the Pacific Ocean with a giant sea mammal nearby that could theoretically capsize this tiny boat, and no one outside our group knows where we are right now…