Search
Menu
Categories
‹ prev next ›
12
Boots and songbooks: where have you been all my life?
January 9, 2015 Nicole Boyhouse Fashion

It’s cold here, but not unusually so, by which I mean today was -22 without windchill and that is the coldest it has been all week. The rest of the week sat around -15 without windchill, which is certainly par for the course for January in Calgary.

My usual morning routine is to drop the kids at school and then meet friends at the off-leash with our dogs. (Who’s a good doggie? Who’s a GOOD DOGGIE? Barkley’s a good doggie!). After our dog walk, I couldn’t feel my feet, which is something that’s been occurring more and more often lately. Lest you think I was underdressed for the weather, this was my outfit: turtleneck sweater underneath a thick wool sweater, jeans, thick woollen legwarmers, two pairs of socks, ankle length parka with hood, earmuffs, gloves underneath thick mittens, and my Joan of Arctic Sorel boots.

Remember when I bought those Sorel boots, years ago, and how it was a revelation to me? They no longer are the godsend they once were. I don’t know if it’s a factor of lots of wear or if my Reynaud’s and circulation issues are just getting worse, but in any case, I’ve been really suffering lately. After spending most of the day in foot agony post-walk, I decided that it was high time for new boots. And I went to MARK’S WORK WEARHOUSE.

End times are nigh.

I went into the store and spoke to the very young male associate. I informed him that I wanted the warmest pair of boots available. These are pretty warm, he said, to which I responded, No. I want your WARMEST pair. Whatever your warmest pair is, I will take them.

I came home with marginally ugly but OMG MAGICAL boots. 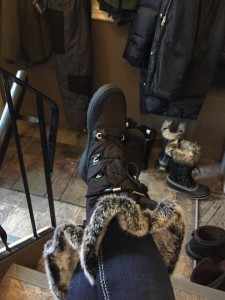 They are called Snow Queens, which makes me feel regal.

I feel like my life has changed, with one trip to Mark’s Work Wearhouse. Previously my trips there have been only to purchase Christmas gifts for my father-in-law.

In other where have you been all my life news, I had ordered a piano song book and yesterday it arrived. It may be the single greatest song book of all time. 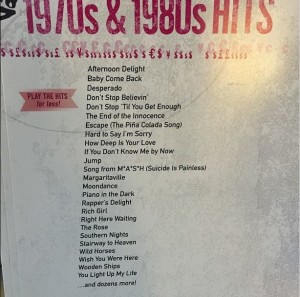 Look at that lineup! And it doesn’t even tell the whole story.

I’ve been playing the piano for almost thirty years – I was quite serious about it for many years, but now I just play for fun.

Digression: how many of us were into something like a sport or an instrument in a very serious way, but now as adults we say “now I just do it for fun”? I have friends who were competitive figure skaters, gymnasts, divers, hockey players, and swimmers, as well as those of us who spent hours daily at an instrument. Question for another day: was it worth it? Are the intangible lessons from that kind of discipline enough to outweigh the time, money, and energy spent? I like to think so, but honestly I am not sure. Thoughts? In any case, I was very happy to be able to spend hours a day at the piano, back in the day, and I’m very happy now to be able to play. I wish my kids had some interest in playing, but they can barely summon up the wherewithal to play their recorders.

Anyway, for the past few years I’ve been feeling a little stale at the piano. Other than Christmas music, my general repertoire was Fur Elise, followed by New York State of Mind or Piano Man, ending with Solfeggio in C Minor. Occasionally I’d plunk away at something new but would be mostly bored.

I tell you this: my new songbook has revitalized every feeling I’ve ever had about piano. Because look! 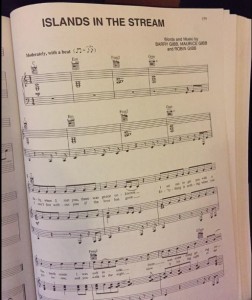 I had initially ordered the songbook for Don’t Stop Believing, but THIS was the first song I chose. I played it for my husband last night, who was nonplussed.

Mr: I don’t even know what you’re playing.

Me: It’s Islands in the Stream!

Mr: *goes back to reading about the NFL*

So that was disappointing. However, as I flipped through I saw the music for Stairway to Heaven and started to play.

Other gems: Wish You Were Here, Open Arms, Love Lift Us Up Where We Belong, and EYE OF THE TIGER. I’m not sure how that will translate to piano, but ever since I heard that guy play Sweet Child of Mine on the accordion, I’ve been inspired to think outside the music box. Heh. Music box.