So there I was, just going about my day like any other; I was driving back home from dropping the kids off at school, and guess what I found in my back alley: 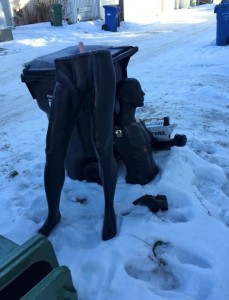 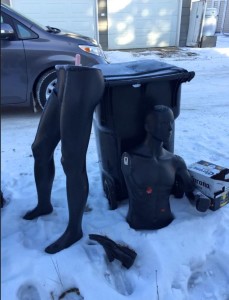 Manny! What have they done to you?

For those of you who haven’t been following the Mannequin Saga of 2014, when we first saw Manny I thought he was a dead body hidden amongst the tree branches in the green space across the alley, directly behind my house. 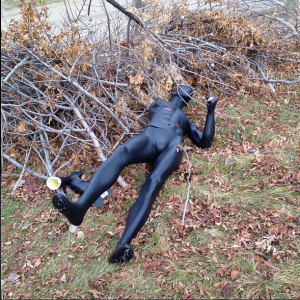 Soon after that, Manny was raised, Lazarus-like, from the dead. 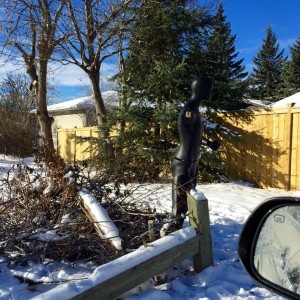 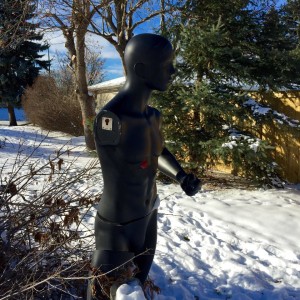 And now, Manny is in pieces, with only an errant shoe and an empty Corona case to show for his travels. 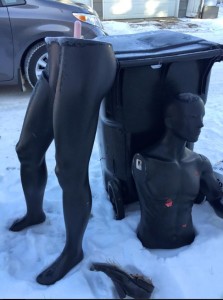 Here’s the thing, though. Prior to this week, all of Manny’s activities have taken place directly behind my house. When I found our poor desecrated Manny, he was half a block down the alley. SOMEONE must have taken him, walked him down the alley, and then fed him Corona until he was numb before sawing him in two, like some magician’s assistant in a magic trick gone wrong. My suspicions lie with the people who live in the house behind which I found him.

It is worth noting that Manny has a few extra wounds to his torso than when we first found him. 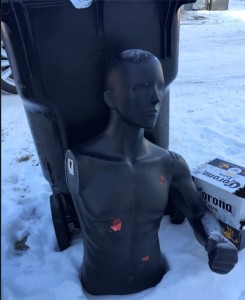 But he is still one-armed. One arm is better than no arms, am I right?

Now here’s the thing: I cheerfully drove down the alley yesterday, on my way to pick up the boys and also to catch a glimpse of my favourite mannequin. I had the idea that maybe, just maybe, I would put a toque on him, in the spirit of the person who decorated the trees at the dog park. Just my little contribution to happiness in the neighbourhood.

But Manny was gone.

At first I thought maybe he’d been picked up with the garbage, but then I remembered that garbage day was Tuesday, so that couldn’t be it. It was terribly windy yesterday morning but I didn’t see him anywhere, and anyway he was pretty packed down in the snow and ice.

Baby, come back. You can blame it all on me. I was wrong, and I just can’t live without you.