It all started when I read my friend Swistle’s post about behaviours that are “mom-ish” and behaviours that are “old lady-ish”.  For example, referring to youth as “young people today”, fumbling for change while the grocery store lineup expands behind, and so forth.  Swistle said, and I quote:

Have you noticed that each generation thinks they’ll manage to avoid seeming “old,” as long as they avoid the exact thing their own parents/grandparents did? A woman my age will say she doesn’t want Mom Hair or Mom Jeans—but what she’s thinking of are the current GRANDMOTHER hair/jeans: she’s filed her OWN mom’s style under “mom,” but a generational shift has occurred since then. Angled stacked bobs and cute-messy twisted-up hair with side-swept bangs ARE the Mom Hair! Cute dark-wash boot-cut jeans ARE the Mom Jeans! BECAUSE THAT IS WHAT THE CURRENT MOMS ARE DOING. Our daughters will speak of such styles with distaste, and will specifically avoid them. “Don’t give me Mom Hair,” they’ll tell the stylist, meaning OUR CUTE HAIR.
An idea sprouted in my brain, my brain that was underneath my “cute-messy twisted-up hair with side-swept bangs”, and that idea was that I am now part of this generational shift.  I am no longer “young people” – which is not news, really – but I am part of the Mom Generation that will be dismissed as lame by our daughters (collectively speaking).  That idea started as a small, uncomfortable kernel and then exploded, like a piece of popcorn.
It exploded when I started flipping through fashion magazines, as one does when one is at the hairstylist getting one’s grey/white roots touched up.  I realized as I looked through that there was not a single pair of boot cut jeans on any of the pages.  I picked up another magazine; same thing.  I picked up an article on back-to-school shopping and saw that all the hottest outfits – worn by young people today –  involve clothing that I wore during my teenage years, distressingly enough.  But it was really the lack of boot-cut jeans on style pages that had me thinking; then I realized that boot-cut jeans are not worn by anyone on popular television shows anymore.
I understand now, perfectly, how certain women who came of age in the seventies could still, twenty years later, be wearing blue eyeshadow that had long gone out of style because they believed that the shadow brought out the blue in their eyes or what have you.  I understand now, perfectly, how a person can cling to something – a bad haircut, a low-fat or low-carb diet – because that was the style during their formative years.  I understand but I am in deep, deep mourning that dark-wash boot-cut jeans have become this to the current young generation: 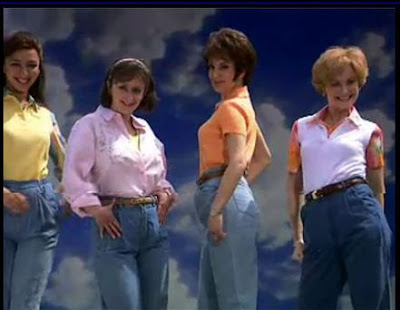 Do you see what I’m saying here, people?  OUR JEANS have become MOM JEANS.  And, sadly, they are fast becoming passe.  I mourn this piece of knowledge and wish I could go back to not knowing it because really, dark-wash boot-cut jeans are the most universally flattering cut that there is.  It’s true.  There is just no way on earth that this 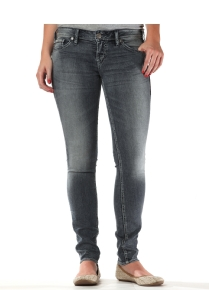 is more flattering to the female body than this: 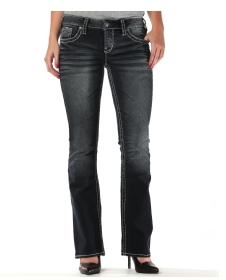 And yet I will concede that skinny jeans are better for wearing boots, which I love, and that skinny jeans do look pretty good with a longer top, which is nice in order to hide the muffin-top.  And this is how I found myself in the mall last week, shopping for skinny jeans.
I was helped by a very sweet young thing named Ashley, who never once helpfully told me which jeans her mother preferred.  Ashley, I realized, is not a name I hear on little girls very often anymore.  Most Ashleys that I know are in their late teens or twenties.  There is a very strong trend right now to give little girls old-fashioned names, lovely names that until recently were reserved for our grandmother’s generation: Grace, Isabelle, Ava, Emma, Lily, Abigail.  These do not include my own grandmother’s names, which have yet – if ever – to come back into fashion.

I had a St. Paul on the road to Damascus kind of realization that, if those names that reflect our grandmothers’ generation are in style now, then in twenty years the names that will be in style are what I consider “Mom names” – meaning my own mother’s generation.  In other words, in twenty years, we will see a rash of Barbaras, Beverlys, Donnas, Corrines, Carols, and Lindas.  Can you imagine?  Our granddaughters may be named Barbara and Beverly.  Or maybe Susan.  This is mind blowing enough, but then twenty, thirty years or so after that, we can expect to see our own names come back in fashion as WE become the grandmother generation!  In 2062, top baby names may well be Jennifer, Julie, Michelle, Melissa, Heather, and MAYBE EVEN NICOLE.

My mind is officially blown by this.

After Ashley helped me pick out a couple pairs of skinny jeans, I went to Sport Chek to find, apparently, the only pair of size three boys’ shoes in the entire mall.  In front of me in line was this girl: 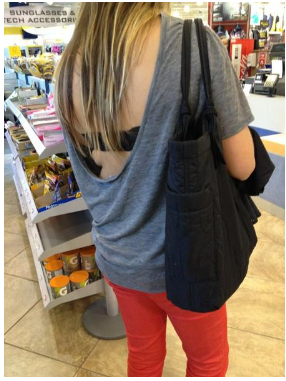 Is this the fashion on “young people today”?  Backless sweatshirt revealing not a bra strap, but an actual bra band, worn with orange skinny jeans?  Is this what is sweeping the fashion nation?

It made me feel that maybe, just maybe, my becoming-passe boot cut jeans are not that bad.  After all, they are flattering, right?  Not like this: 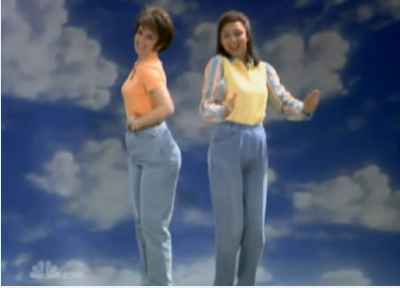 Right?  RIGHT?  Although I did notice that high-waisted shorty shorts were being worn by the young crowd this summer, which makes me wonder what is happening.  What is happening in the world today?

And what do I mean by “Batting 500”?  It’s my 500th post!  I can’t believe I have had so much to say!  And I am so very, very grateful to you, dear readers, for reading and commenting and being supportive.  Thank you.  Stay real.  Let’s wear our boot cut jeans with pride!  xoxo