Many, many years ago, before my mother-in-law discovered email and all the associated animated emoticons that could be utilized therein, she used to send me actual written letters, usually accompanied by a piece of knitting she had been doing – the knitted dishclothes I prefer, for example.  In one such letter she had written all about her daily doings for about four pages, then abruptly concluded with the line “Well, that’s enough boring, useless, who-gives-a-shit information for today.”  It’s something that still makes me smile, and I often mentally refer to certain things as such: boring, useless, who-gives-a-shit information.

That is how I feel about reality television.  I never watch it, except for sporadic episodes of American Idol and, although I am loathe to admit it, The Bachelor.  I don’t watch much television but when I do it is what I like to think of as escapist television; comedies such as Parks and Recreation, for example, or Modern Family.  Serious television programs don’t interest me much unless they involve Sipowicz threatening to beat down a perp to give himself up or Dr. Sloan doing anything at all.  If Dr. Sloan took to the airwaves reading a copy of Today’s Parent, I would avidly watch it.

As an aside, I’m quoted a few times in this month’s Today’s Parent, on the joys and pitfalls of stay-at-home parenting.  Also as an aside, the other day I mentioned that I was a stay at home mom, and received the huffy response “It must be nice to be able to afford such a luxury.”  I was  a bit taken aback by the resentful and bitter tone.  I never know how to respond to such.  It IS nice, actually.

Anyway, back to reality television.  I don’t watch it and I most certainly do not find it tempting to watch, especially if the program involves a) children, b) domestic chaos, or c) dysfunctional families.  I have my own children, I have access to my own domestic chaos, and if I want to see a dysfunctional family I will go to my next family reunion.  And so I’ve never watched the program that features the Duggar family and their very large brood, but I am aware that there is another bun in the oven, so to speak.  I’m aware of this somewhat against my will, since it is all over the news and, relatedly, all over Facebook.  In fact, someone posted this picture just the other day: 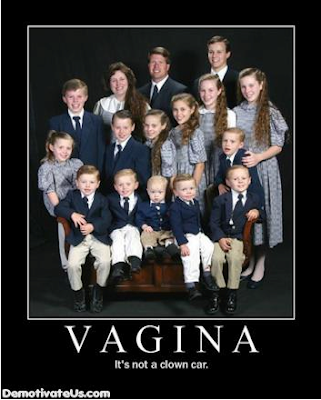 Oh, ha ha.  Good one.  Except for a few little things: a) a clown car involves all the clowns being in there at the same time, which is clearly not the case given the wide range of ages, and b) the more correct terminology would be the UTERUS, not the vagina.  Even if the children were all clustered in this poor woman’s body at the same time, they would not be stuck in her vagina.  They would be in her uterus.  But it does not matter, it is an incorrect comparison anyway.
I really couldn’t care less how many children other people have – I maxed out on two but I’m well aware that everyone is different when it comes to ideal family sizes.  However, when I did hear that this woman has birthed nineteen (soon to be twenty) children, the first thing that came into my head was “Wow, her poor vagina!”  I mean, there are not enough Kegels in the world, if you know what I’m saying.  Which brings me to a funny story.
When I was pregnant with Mark, I worked on a natural gas trading floor in a group of men.  It was an open environment which meant that I often had someone standing behind me, peering at my computer screen.  Since I was pregnant, I had a bit of concern about the impending birth and the subsequent effect it would have on my delicate feminine essence, let’s say.  So I put “Kegel Exercises” into my scheduler and twice a day a little reminder would pop up on my screen, after which I would dutifully perform them.  One day a young male colleague and I were working together, and, predictably, my reminder popped up on the screen.  I clicked “DISMISS” quickly, but not quickly enough, as his face turned red and he suddenly needed to get something from his desk, right now.
I wonder if he could tell I was already doing them.