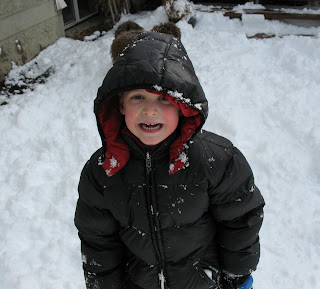 I remember my pregnancy with Mark so well. I walked around in a constant state of ecstasy mixed with anxiety – I was so happy to be pregnant, but also so worried that something was going to go wrong or that I would do something wrong. That feeling was not helped out by the many scary pregnancy books on the market, all of which I read. If I could have had one of those Doppler heartbeat monitors hooked up to me all the time, I probably would have. I was so happy to feel his first movements, and I was happy he was such an active little fetus. I remember he was especially active when a heavy metal or hard rock song came on the radio, and funnily enough, those are the musical genres he prefers to this day. “I love Welcome to the Jungle!” he informed the kindly and startled children’s minister at our church when asked about his favourite song.

Mostly, though, I just felt joyful, and expectant, and thrilled. And hungry. I ate enormous amounts of food, and constantly craved hamburgers. After an astounding weight gain, a pre-eclampsia diagnosis, and a subsequent three-week bedrest (after I had already finished work and started my official maternity leave) I waddled into my doctor’s office on March 23. She poked me in the puffy cheek in an illustrative way, and informed me and her young intern that I was going to be induced, TODAY. And that is how I ended up spending my second wedding anniversary in the delivery room.

I was only in labour for four hours, screaming such hilariously obvious things like “THIS REALLY HURTS!”. “I THINK I NEED THE DRUGS” I shrieked to Shannon, my young and sweet delivery nurse, who replied that I was nine and a half centimeters, and there was no way they were going to administer drugs at that point. Oh.

At 11:55, Mark was born, trumping our anniversary and forever changing my life, starting me on the long road that is motherhood. That was five years ago, and I can’t imagine life without him, my brave, sensitive, vehicle-obsessed, stubborn, happy, and funny little man.