Search
Menu
Categories
‹ prev next ›
8
We Are All On Edge
May 21, 2020 Nicole Boyhouse My failing sanity 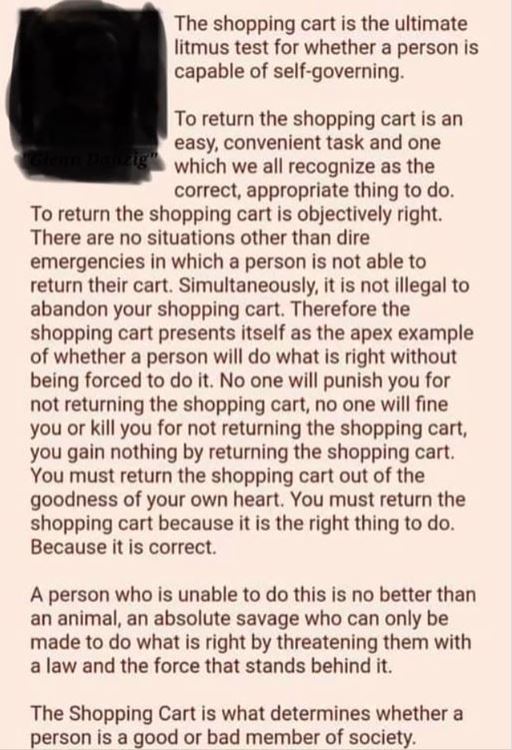 One of the benefits of having a personal blog for twelve years (twelve years! Egads.) is that people really know where I stand on important issues. It is no secret that I have Very Strong Feelings about Returning Shopping Carts, and so when several friends pointed out the above Shopping Cart Theory, I had to smile and agree.

Then, of course, because it’s the internet, and because people are humourless and self-righteous, there was some uproar about the Shopping Cart Theory. It’s ableist! It’s not fair to judge people based on a single action!

And to this I sigh deeply. In terms of ableism, I think it is IMPLIED that if a person is physically – or mentally, I will include mentally because I know there are some women who suffer post-partum depression and damn if shopping with very young children isn’t trying enough, sometimes it’s just as much as you can do to just buckle those kids back into the car seat and drive away without having a complete breakdown – unable to return a cart, that person is exempt from the Shopping Cart Litmus Test. We who believe in this test are not monsters who believe that the world is black and white, and that people with physical disabilities are bad people because they cannot return their shopping carts, my god. I think with everything that it is implied that there are going to be some very good exceptions to the rule; a lot of places offer carry-out groceries, but some don’t, and OKAY, FINE. There are people for whom it is not physically POSSIBLE to return a shopping cart, yes, and for those people I would take that cart back myself, we after all must look after each other in our society, but I have a hard time believing all those carts scattered through the Costco parking lot are a result of physical disability. In fact, the carts that are specifically dragged up over the curb and onto the median and left there are done by people who have much more strength than I do, and I am physically fit. Have you ever TRIED to pull a cart up over a sharp curb? Doing so requires much more effort and physical strength than wheeling it back to the carrel. Plus, those medians are there for the physically disabled to use, as a safe walkway for those with walkers or wheelchairs, and so I very much doubt that the physically disabled are a) able to transport a cart in such a way, and b) would do so in order to sabotage their own well-being.

Second, in terms of judging people based on their actions, well. What else are we judged for if not our actions? I agree that some rhythm can be given for first offences, after all, we all make mistakes. I once screamed Don’t ever fucking call here again, you piece of garbage to a telemarketer who had phoned and asked for my husband several times in a two-day span, without compassionately considering that this was his job, such as it was, and that we all need to feed our families, and he was merely a cog in the giant wheel of telemarketing, not the perpetrator of the industry. So yes, perhaps we should not immediately jump to conclusions about whether or not a person is a good or bad member of our society, but still. If a person rarely or never returns a cart? Well. I think we all know what my thoughts are.

What about the argument that leaving shopping carts willy-nilly pell-mell in the parking lot supports the creation of jobs, in that there are people whose job it is to collect carts and bring them into the store, and that returning carts to the carrel would unemploy those people? That point of view is stupid and I reject it completely. Sure, there are people whose job it is to clean bathrooms and to collect garbage, but does that mean that we should all defecate on the floor and throw our garbage everywhere? NO IT DOES NOT. That would be STUPID, as well as INCONSIDERATE, GROSS, AND DISGUSTING. The people whose job it is to collect the carts can just as easily be employed by bringing the carts from the carrel to the store, and in taking your cart back, you are actually making a person’s job easier.

All of which is to say I applaud those companies that implement coin-operated carts as people obviously require financial rewards, rather than spiritual ones, at least in this lifetime. It is a depressing, yet accurate observation.

Whew. I was not even planning on talking about that today, let alone diving into Our Collective Contributions To The Societal Good, but here we are. Yesterday I was at Superstore, where, thank god, they have coin-operated shopping carts and so my faith in humanity isn’t eroded on a weekly basis, at least in terms of shopping carts, but slightly in terms of What Are We Even Doing. Despite the diatribe above, I try, oh my god do I try, I try all the time not to judge. And so when I saw a couple – perhaps in their fifties, certainly not what I would consider aged – shopping, I did try to think that maybe there was a Very Good Reason they were shopping together, despite the myriad signs requesting only one shopper per household wherever possible. Perhaps it was not possible. Perhaps something is going on that I don’t know about. This couple, despite all the many, many signs and the very regular reminder over the loudspeakers that there is one single line for checkout and to please wait for the Superstore employee to tell you what till to approach and when, marched right over to Till 7, and prepared to unload.

And may I take this opportunity to say that this is a VERY good policy in these Pandemic Times. It is efficient, and safe, and allows for sanitization and social distancing and all those other things that are currently of Utmost Importance, and I applaud Superstore for the implementation of this policy, as well as their coin-operated shopping carts.

The very lovely young woman in charge politely asked them to go back to the line – not even to the back of the line, just to the starting point – at which the man, who happened to be unmasked and standing a little too close to the lovely young woman, began speaking in a very loud and sharp manner about the injustice of it all. The lovely young woman then pointed out that he could now go to Till 4, as it had just been cleaned, at which point the man continued to grumble very loudly about this policy which he didn’t know about, how was he supposed to know, and what difference could it possibly make what till he went to, he was going to talk to management.

SIR, HAVE YOU READ THE NEWS LATELY OR PERHAPS TURNED ON YOUR RADIO?

Well. People are on edge. I smiled at the lovely young woman, when it was my turn, insomuch as one can smile while wearing a mask. I complimented her hair, which is truly beautiful, long and golden blonde and always in a thick braid. I hope that her day went well, or, at least, that she is now deadened to the stupid actions of people who do not listen to loudspeakers or read signs or follow the simplest of rules.