I am absolutely a morning person, and yet I’ve had a few strange occurrences over the past few days that have caused me to figuratively tilt my head and raise my eyebrows at myself. On Saturday I started the coffee without noticing that the pot was on an angle, and by the time I finished washing my face, brushing my teeth, and feeding the dog there was half a pot of coffee that had spilled out on my countertop. Half a pot of coffee is a lot of coffee on a flat surface; it took me many minutes and many dish clothes to clean the mess up. I had to move all the small appliances and twenty-five bananas out of the pool of coffee and, of course, the angled pot had pressed up onto the filter and so there were grounds all through my coffee maker as well. My coffee maker was in need of a vinegar cleaning anyway – I am not sure if I’ve EVER given it a vinegar cleaning, and I have had this coffee maker since at least 2012 – but still. It was not, I thought, the best way to start a new month.

Then, this morning I went to yoga practice with my pants inside out. I didn’t even notice until I was two-thirds of the way through; if they were black I’m sure I would have never noticed, but they were blue, with a black gusset, and so it was fairly obvious.

Despite these two occurrences, February seems to be off to a good start. Saturday my husband and I had a date to The Casbah, where I had the single best meal of my life. I am not exaggerating. It was epic. If you are in Calgary, you really must go. Not only is the food incredible – I’m serious, it was the best meal I have ever consumed – the atmosphere is wonderfully romantic and lovely. I have always wanted to visit Morocco; one day I will and I will eat all the chickpeas and tajines and couscous you can imagine.

Then yesterday, in addition to being a palindrome, Kansas City won the Superbowl, which I was excited about. I also made a delicious dessert that I hadn’t made for a while, strawberry daiquiri pie. It’s the easiest thing in the world: a few days before, put two cans of full-fat coconut milk in the fridge. Scoop out the thick and creamy part to use, whirl it in a food processor with three cups of sliced strawberries (I used thawed frozen ones), two tablespoons of lime juice, and 1/2 cup honey. Pour it into a graham cracker crust (1 1/4 cups graham cracker crumbs with 1/4 cup melted coconut oil). Freeze, eat with magic shell chocolate (2/3 cup coconut oil melted with 1 cup chocolate, add 1 teaspoon vanilla and 1 tablespoon honey). 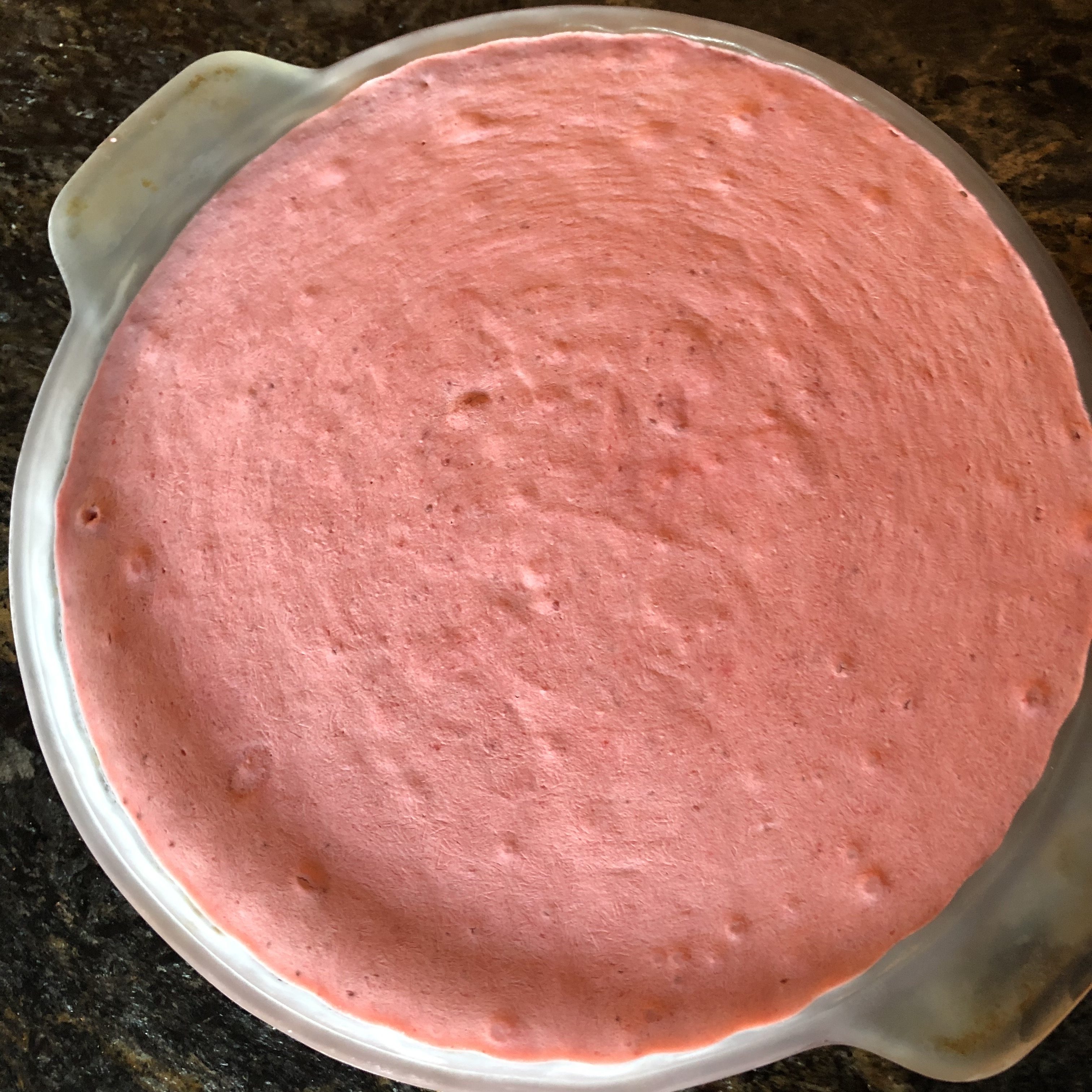 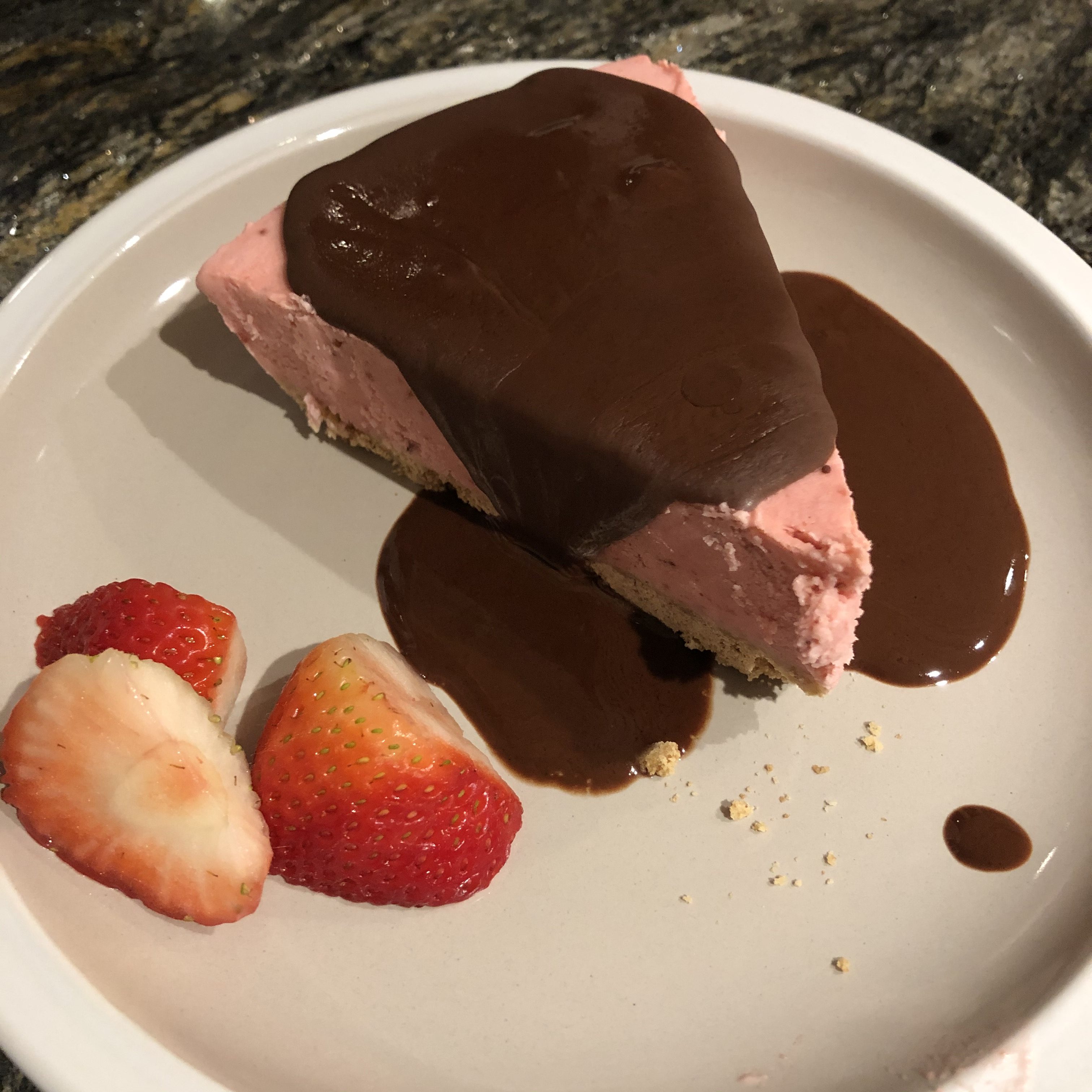 Most importantly, though, today my son went back to school. Hurrah to the end of exam break, all is back to normal in the Boyhouse.

So February is great so far, and I am happy to report that I am no longer hearing Honky Cat on a loop in my head. I was talking to the boys about this and my younger son pointed out it was excellent that I didn’t have Bennie and the Jets stuck in my head, because no one knows the words to it. I realized with a start that this was true. I don’t know the words to Bennie and the Jets; I would venture to say that no one does*. I would say that the entire population might know “Hey Kids,” followed by a great deal of mumbling, then “She’s got electric boots,” more mumbling that culminates in “B-b-b-bennie and the Jets.” But nothing else.

My son told me he had looked up the lyrics and it was worth doing; if you are interested you should do this because whoa nelly, none of those words a) make sense, and b) sound like anything at all in the song.

Speaking of things that don’t make sense, I had to go to Walmart for a few Walmart-y type things, one of which was Advil. The Pain Relief aisle is the same as the Family Planning aisle – huh, let’s not think too much about this – and there was a man there, talking with one of the employees. The employee – who was, I feel it is important to mention, female – had a box of condoms in her hand and was reading it.

At this point I seriously considered browsing through the KY jellies and multiple personal lubricants just to hear the rest of the exchange. Mostly, though, I was impressed with this man. I mean, who has the confidence to ask for extra small condoms in a normal, non-whispery voice? Who has the confidence to actually go to a physical store to look for extra small condoms, rather than special order them online? May we all hold ourselves in such esteem.

Also? I’m pretty sure they DON’T have extra small condoms. I am pretty sure that the condom companies would never market them that way. It’s probably like in Starbucks, where a small is a Tall.

Well, there’s no good way to segue into this, but look at what I saw in the Co-Op the other day: 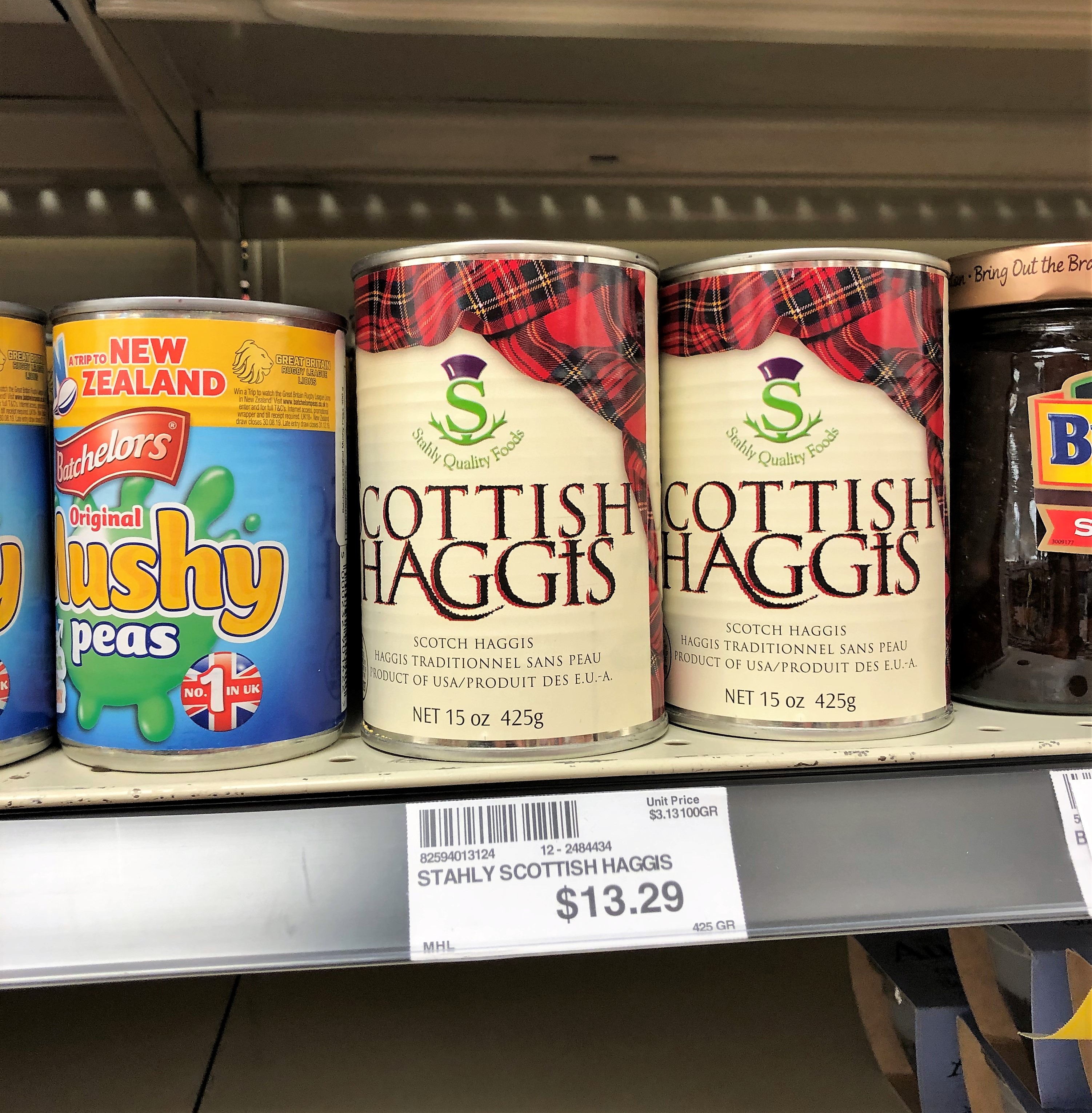 CANNED HAGGIS. Who knew there was such a thing? Not me, that’s for sure. As if haggis itself isn’t gross enough – “I think all of Scottish cuisine is based on a dare,” Mike Myers – CANNED haggis? Who would buy this? Let alone who would pay $13.29 for a can of haggis? No Scottish person, that’s for sure. If there is one thing that unites us as a people, it is frugality.

As a note I have never actually eaten haggis, canned or no, and I never will. But I just can’t imagine it being good in any capacity, even if I wasn’t vegetarian. Note the mushy peas next to it. Shudder, shudder, shudder.

I have decided that I WILL challenge myself to wear a different outfit every day in February. Let’s see how this goes. Today is cold and snowy and grey, which is a very February kind of day, I think. So why not brighten it up by digging through my closet to come up with different things? If there’s one thing I love, it’s clothes. And Moroccan food. And Elton John.

Here are my first three outfits of the month: date night, my only football-themed top for Superbowl Sunday, and a very typical “teaching day” outfit. 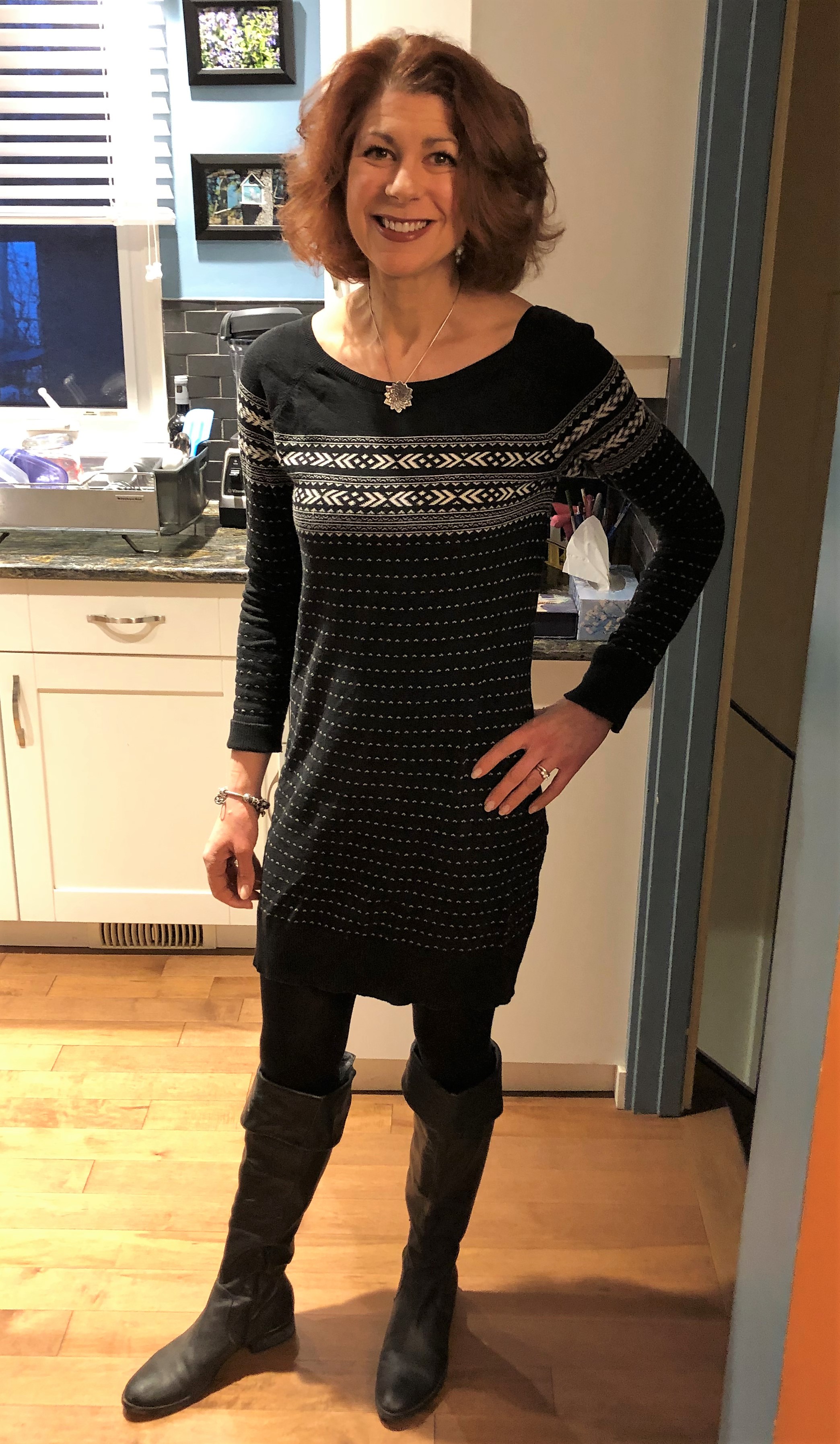 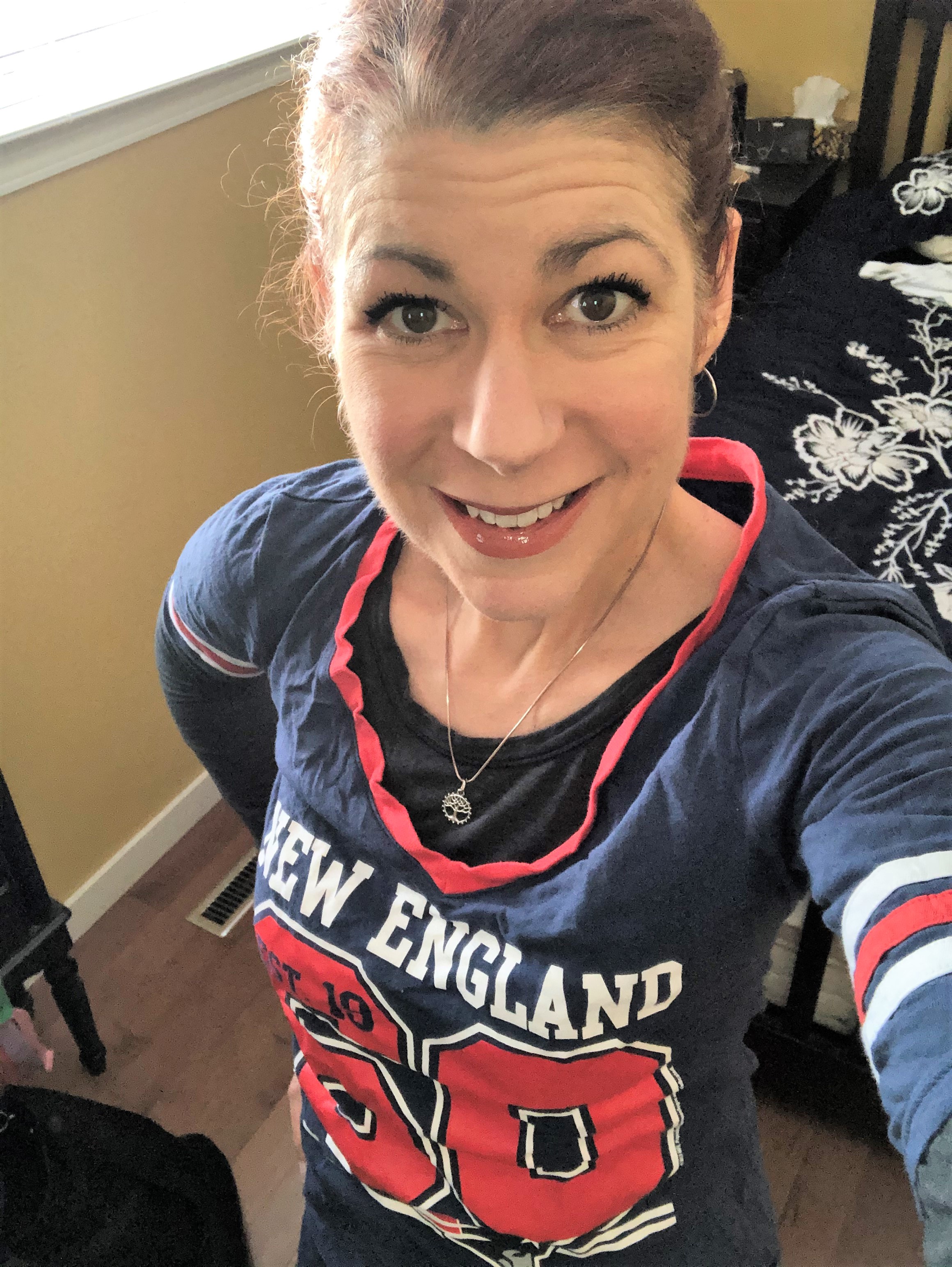 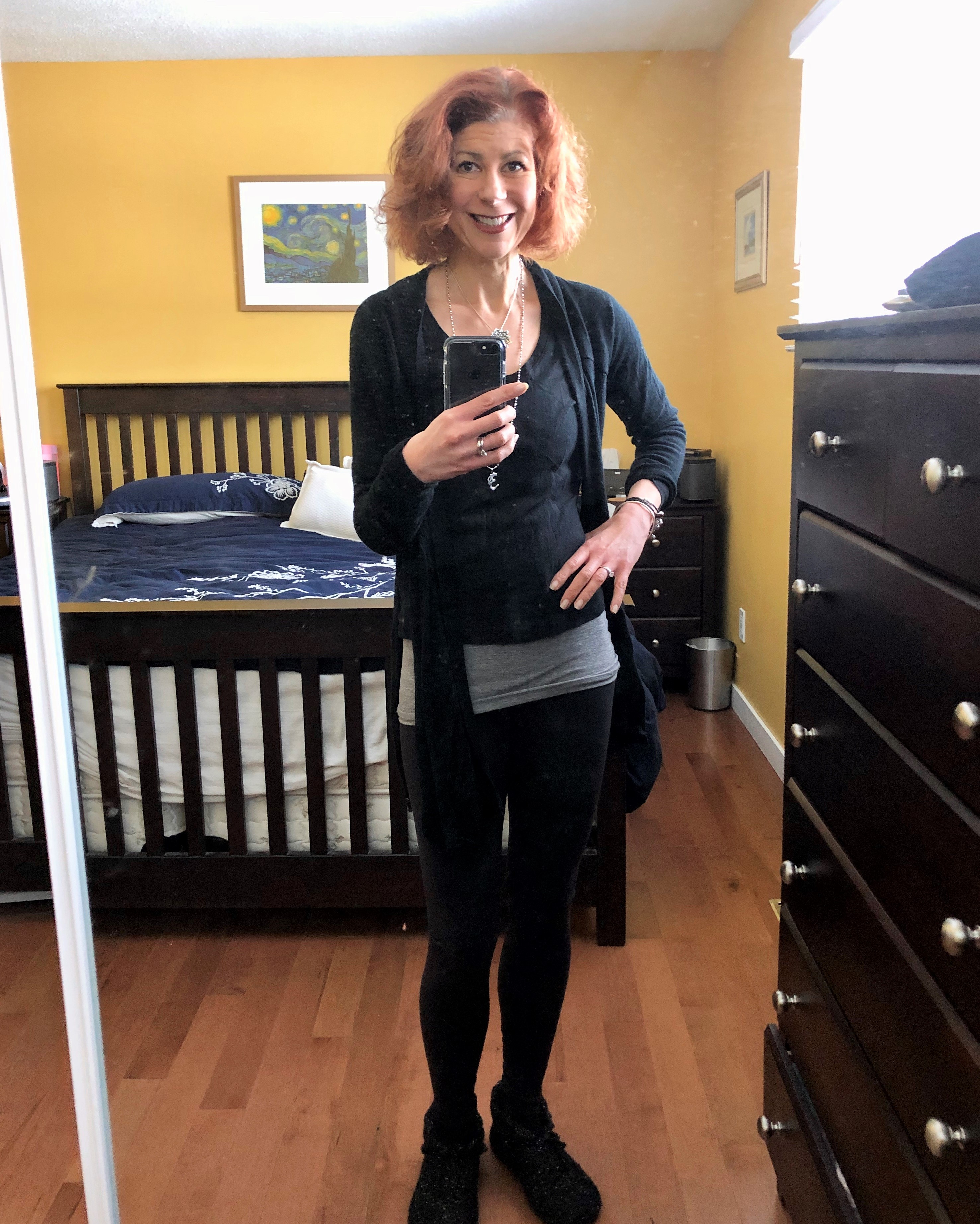 *Technically it is not no one; other than Elton John, my friend’s husband does actually know the words, which is a very excellent party trick in my opinion.