Search
Menu
Categories
‹ prev next ›
10
Until I saw your city lights, honey I was blind.
January 31, 2020 Nicole Boyhouse Beauty and body

I tend to avoid bragging about my kids; not that they are not braggable, but because I think it’s bad form. However, this all changes now. I am here to tell you that their knowledge of Elton John lyrics is second only to my own, which is to say, excellent. In point of fact, their knowledge was close to besting mine, as there was some involved discussion whether or not the line was I miss the earth so much, I miss my wife or life. It turns out that we were both right, as the line is “life” in the movie, but “wife” in the OG version, as the kids say.

I realized their lyrical knowledge had skyrocketed from Fine to Astonishing when we watched Rocketman on Saturday night. It was so much fun to watch with them; the three of us singing heartily throughout the movie. I’m not sure if my husband, the lone non-singer, found it quite as charming, but whatever. I can’t wait to watch Bohemian Rhapsody with them: I see a little silhouette-a of a man…

The sole issue from our fun singsong party-of-three is that I have had Honky Cat stuck in my head, on a loop, ever since. If I was to list my top ten Elton John songs, Honky Cat would not make the list. I don’t even think it would be in my top TWENTY. But here I am, nearly a week later, singing snippets of it all the livelong day. Get back, Honky Cat, better get back to the woods…at what point do I declare myself insane? Soon, I think. Living in the city ain’t where it’s at…

While I’m bragging, on Monday two unprecedented things happen. Now, before I go into those things, I will say that my boys are very helpful around the house; they have set chores and those chores are always done, they always are willing – usually cheerfully – to help out with any household/ yard/ snow shoveling task when asked, they keep the house and all the areas they inhabit in the house very tidy and clean. However, and I know every woman out there can relate to this, they often don’t See Things That Need To Be Done The Way I See Those Things, and I could get into a whole thing about Emotional Labour but I will not. Anyway, two things on Monday happened that have made me singing Looks Like We’ve Made It, interspersed with, of course, Honky Cat. I quit those days and my redneck ways…

Monday morning I was writing at my desk and I could hear the clanking of dishes and silverware from the kitchen (YES IT IS WEEK THREE OF EXAM BREAK, LET US NEVER SPEAK OF THIS AGAIN). When I finished what I was doing, I realized that my older son (EXAM BREAK OMGGGG) had eaten his breakfast, realized that the dishwasher was finished its cycle, UNLOADED THE DISHWASHER and then PUT HIS OWN DISHES INTO IT. Yes, of course my kids always put their dishes in the dishwasher when they are finished with them, they are not barbarians, but to unload the dishwasher without being asked? UNPRECEDENTED.

Later, that very same day, my younger son changed the roll of toilet paper; this is nothing new, the guys always do this, it is unremarkable in and of itself. But he took the empty roll out of the bathroom and put it in the recycle bin, rather than leave it on the countertop in the bathroom. Also unprecedented! And just as astonishing!

So I am bragging about my wunderkinds; even if neither of those things ever happen again, well, we will always have Paris, so to speak.

Thank you all for your comments regarding gel pedicures; especial thank-you goes out to Samantha (HI SAMANTHA) for her comment about gel polish being bad for the nails. Long time readers will remember the time I got a manicure when I was stuck at the car dealership for many, many hours. That was a gel manicure and a few weeks after getting it, the polish peeled off, leaving my nails thin and weak. It took a long time for my nails to get back to normal; thank you, Samantha, for reminding me of this. I ended up cancelling my pedicure; I considered taking in my own polish, but that felt weird and overly controlling. I also considered getting no polish, but, to be honest, my feet are not, as my friend Taryn (HI TARYN) says, “manky,” so it felt like a waste of money just to get them soaked and scrubbed, which I can do at home. I figure I can Support Local Business in other ways. For example, waxing. A hirsute girl such as myself can well keep a business going. 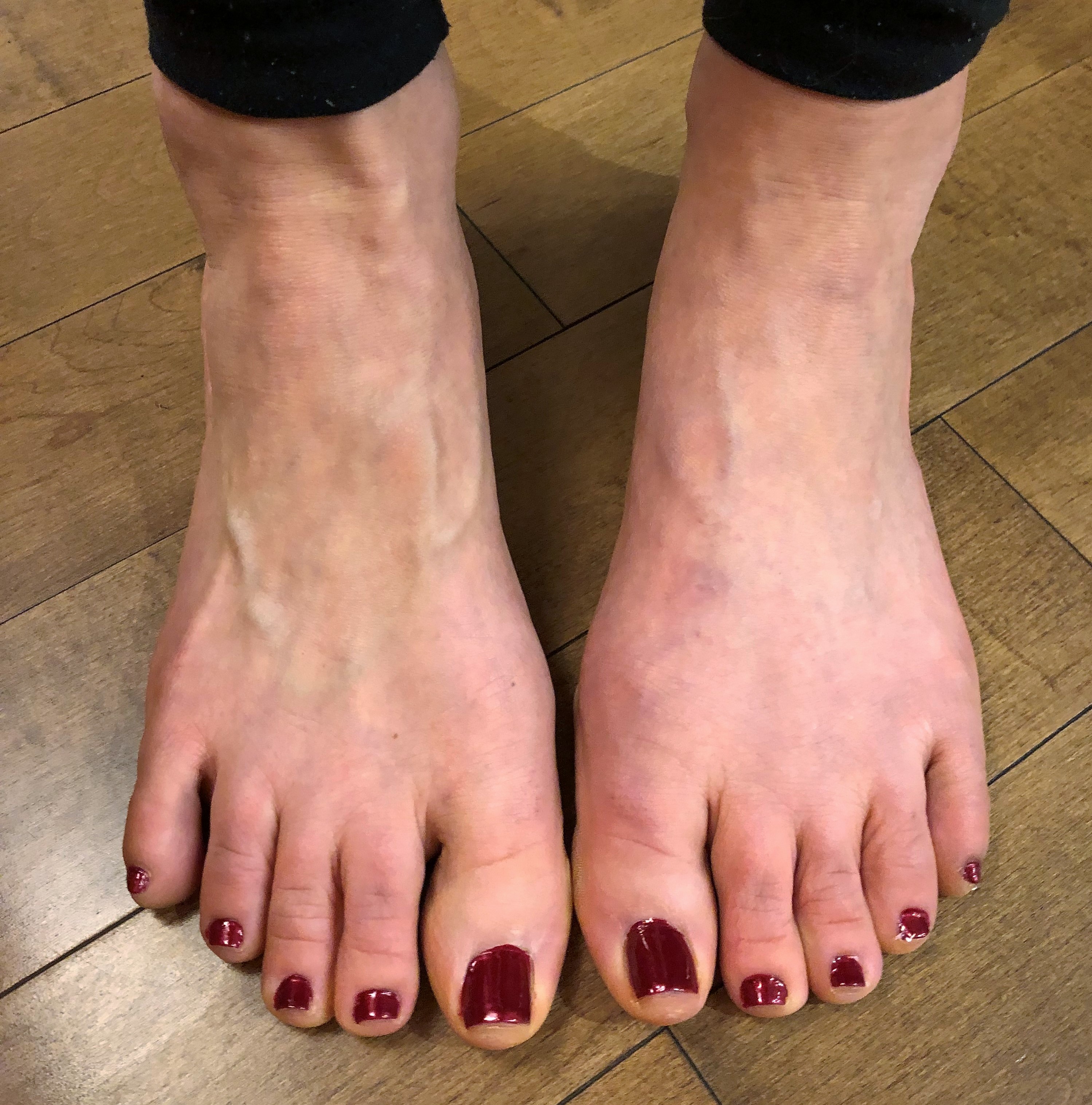 Oooh, maybe the next Favourite Things will be all about foot products. Sorry to keep you all on the edge of your seat! But you will have to wait.

I cannot believe tomorrow is February, this is the fastest moving January in all history, or at least in all of MY history. There are a few really good things I want to tell you about, to round the month off.

I was rearranging the top shelf of my closet, where I keep things my gym sweatshirts and lesser-worn but much-loved items such as sweater dresses. Behold, underneath my pile of sweater dresses was this sweater: 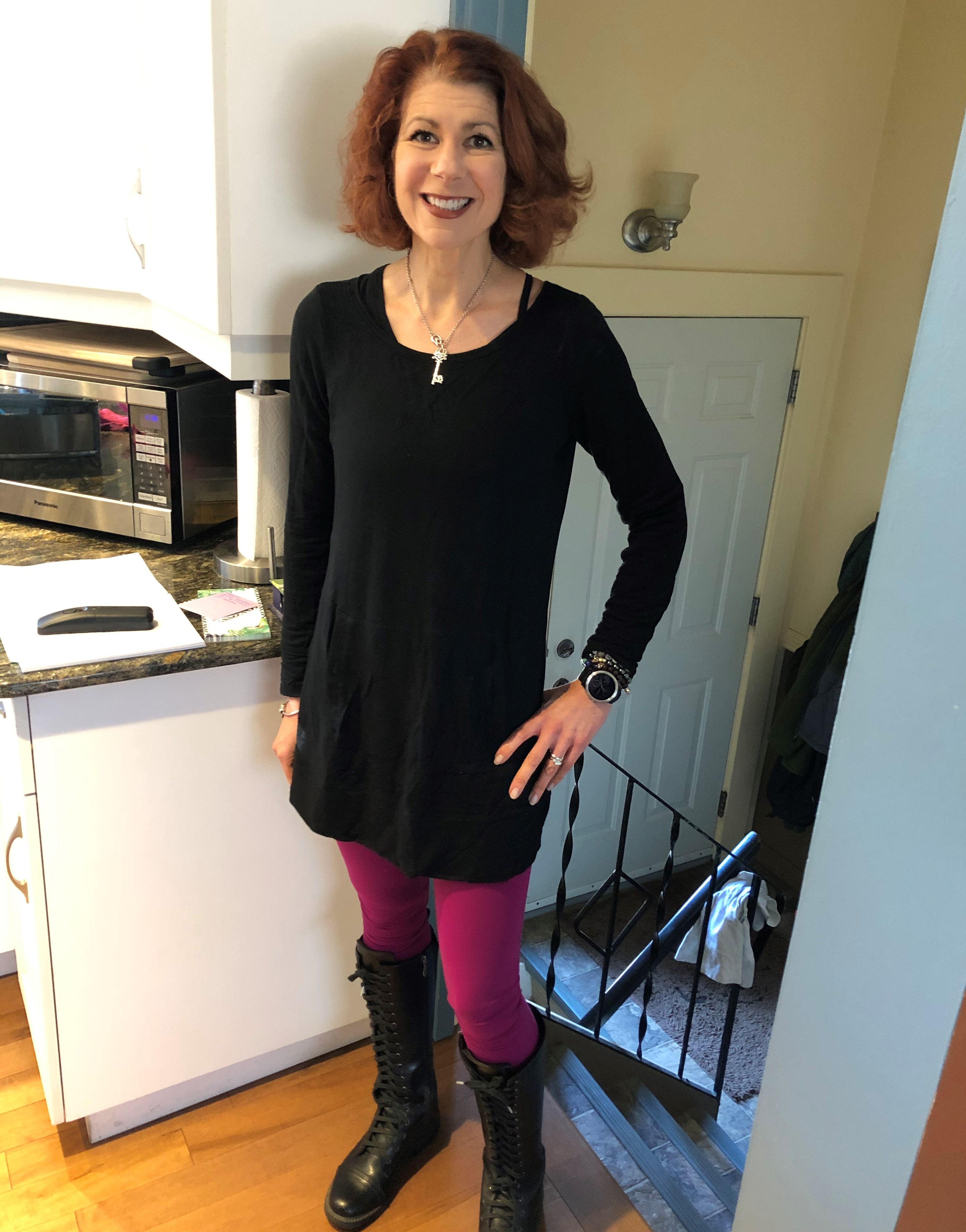 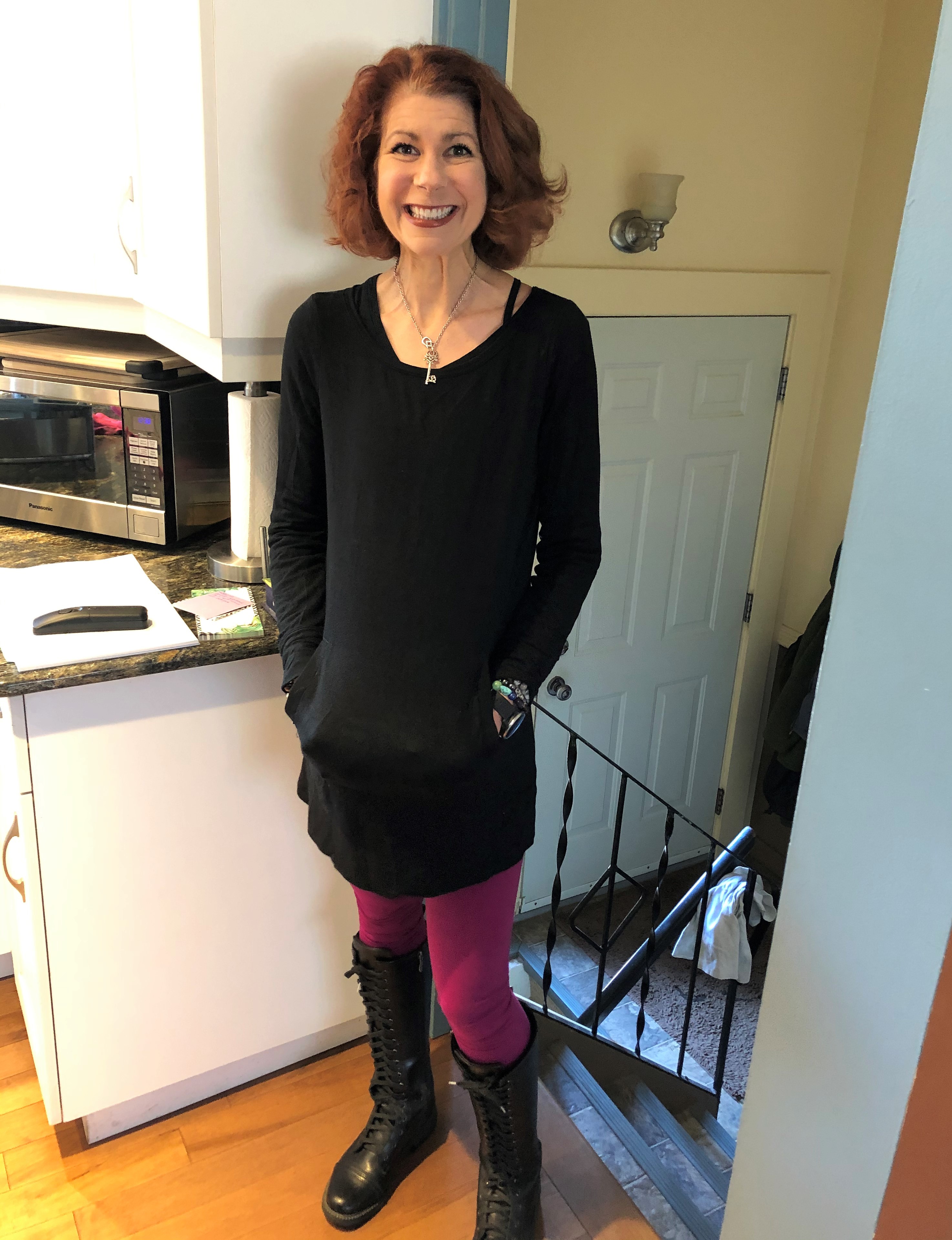 This is a significant discovery – the sweater, not the pockets – not only because I’ve had this sweater for many years and love it, but I completely forgot about its existence. When did I last wear it? Who knows! I LITERALLY forgot that I owned it. It was like finding something brand-new, although this sweater is the opposite of brand-new. What an exciting discovery. The very fact that I found something that a) I haven’t worn in years, and b) I love, made me think, once again, that my Sweater Situation is Ample.

Maybe I’ll do a February Challenge! Maybe I’ll try to wear a different outfit for each day in February, sweater-wise, at least. February is a short month, I should be able to do that. Obviously there will be some repeats in the form of jeans or black yoga pants – I have a number of those, too, but not enough to get me through the month without re-wearing.

I gave my little herb garden a break for a month or so, when I discovered fruit flies (fruit flies! In November!) that were infesting my cilantro. Or maybe they were aphids? I don’t know, but I did not want to eat infested cilantro. I don’t think that’s vegetarian. Also, gross. As you know, I cannot – CANNOT – go back to grocery store cilantro, so I have been doing without. I decided all was fine now, bug wise, so I planted some cilantro seeds, but it was just before the extreme cold snap. Even with the grow lights, it was too cold for the seeds to really sprout. Well, happily they are sprouted now and I am only a couple of weeks away from harvest. I can’t wait! The pleasure will be all the greater for the waiting, as old-timey suitors might have said about a reticent lady friend who finally agreed to an engagement.

It’s been so mild that on three occasions in the past ten days, I’ve worn my cute, stylish, flattering, lightweight winter coat. Don’t worry! I haven’t put away my sleeping-bag-with-sleeves, and in fact, I’m wearing it more often than not, but I have felt like a Winter Fashion Plate on those three occasions. I have paired my coat with a big blanket scarf and my tall, lace-up-but-with-a-zipper-on-the-side boots, and have felt like a Very Fancy Lady, one who lives in a much less harsh climate, who can look forward to “winter.” Or maybe one of those high class ladies down in New Orleans… 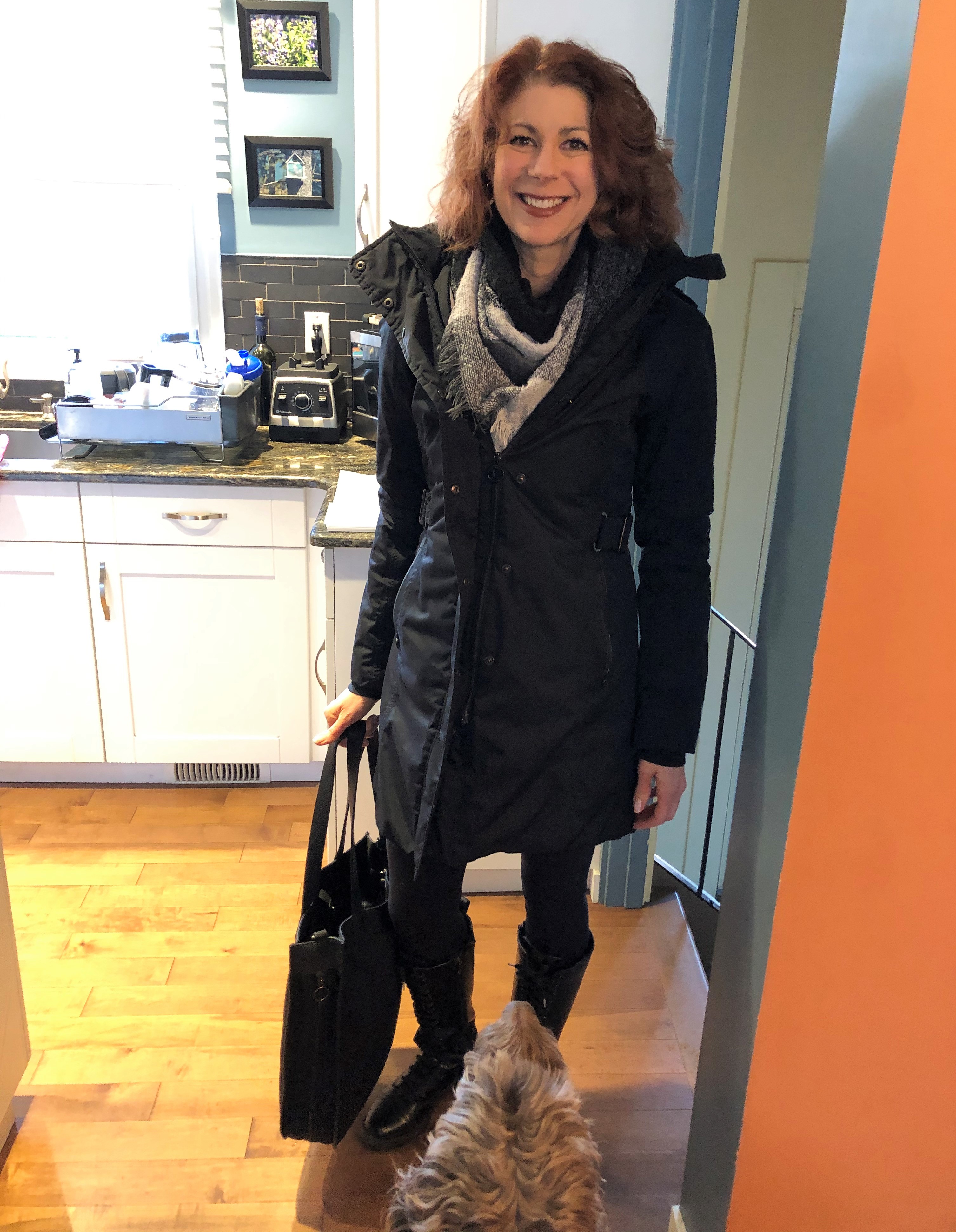 Photos courtesy of my older son who – have I mentioned this already? – has had NO CLASSES FOR THREE WEEKS THREE WEEKS PEOPLE. Cue up:

It’s Friday, people! Let’s drink wine from a bottle of wine (or whiskey, I won’t judge) and enjoy the weekend. xo