Last week I had a letter from the government regarding my taxes, and is there any other kind of letter that can strike so much fear in one’s heart? Oh my god, am I being audited? I thought, wondering where I put the brown paper bags and should I go get one now? Happily, I am NOT being audited, and a phone call to a very nice government employee was calming and reassuring; there was just a little information that was required, on my part, to provide to Revenue Canada. “If you could just fax that over to me this afternoon, that would be great,” said the very nice government employee, to which I replied that well, actually, I don’t have a fax machine. Because it’s not 1997, I didn’t say. Do people fax things anymore? Scanning and emailing was not an option offered to me, and so it was off to the post office. Actual literal mail! Fax machines! What year is it?

Recently there have been quite a few memes going around about there being only a short time left in this decade, and what have we all accomplished? I tell you what, until these memes came out I kind of forgot that we are starting a new decade. Yes, I do know what year it is and yes, I do know how decades work. The thought of “2020” just didn’t have the kind of importance to me that, say, the Nineties or 2000s did, other than it feels kind of cool to say 2020. Plus, what have I accomplished? I think we’ve all accomplished lots of things; for example, this weekend I helped my husband and son hang the outdoor Christmas balls in the tree. 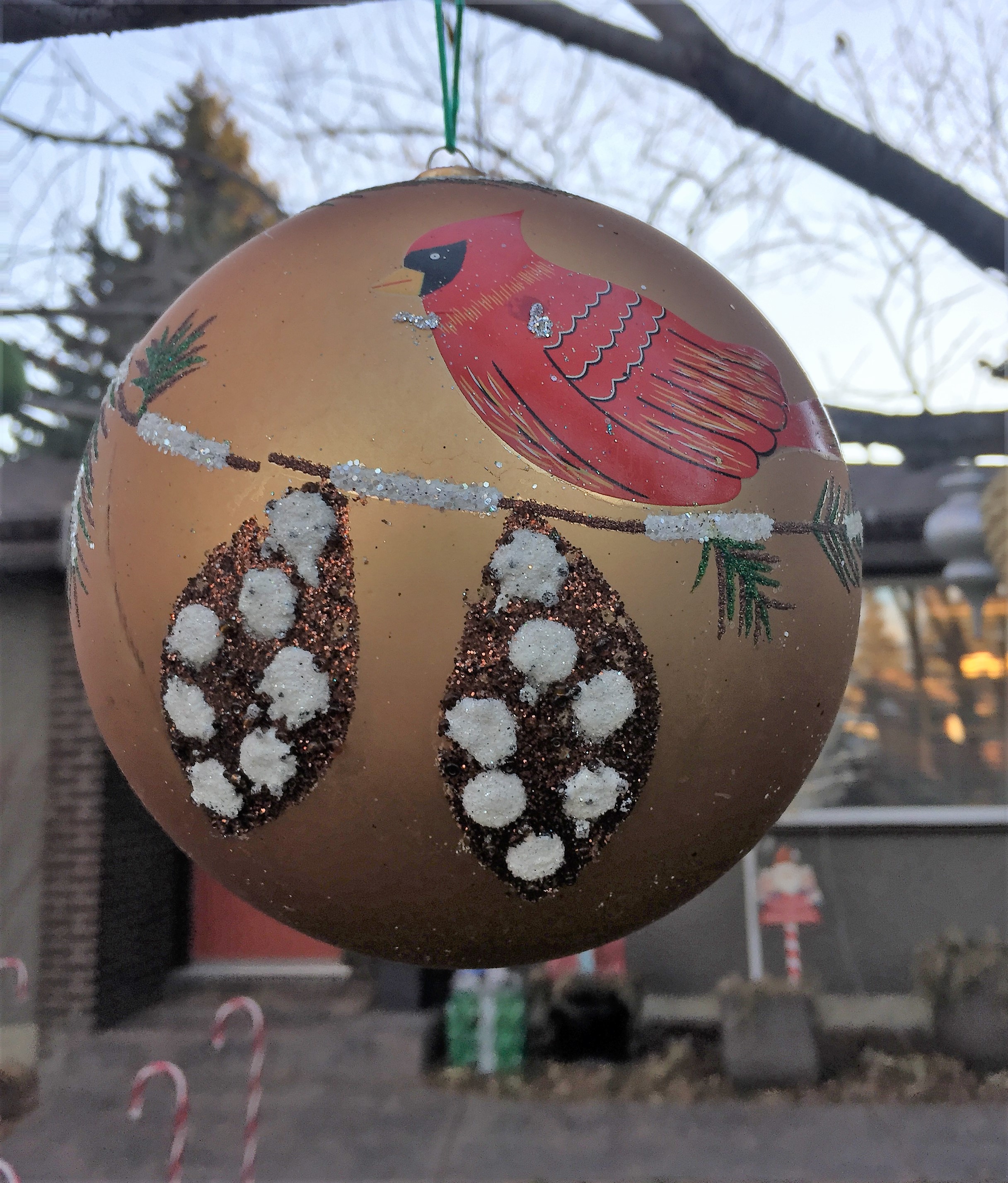 After many hours of work, there is still much to do in terms of Christmas lights, which is less a reflection of my husband’s work speed and more that we have so many outdoor decorations, we are now rivaling Clark Griswold. “Now” rivaling is a bit of a misnomer as this has been going on for years, and each year my husband and older son go to Canadian Tire for “cords” and end up coming home with more light-up animals and snowmen.

We had the cutest light-up snowman who met an unfortunate demise this past summer. Due to its gigantic size, my husband was storing it on the covered back porch, where it was partially eaten by a squirrel. The squirrel not only ate all of its hat, it also chewed through the electrical wires, rendering it not only unattractive, but also dangerous and useless. Yet another reason why to loathe the squirrels.

I have a laughably eclectic library pile right now, and since Helter Skelter took me longer than average to get through – and no wonder, it’s well over 600 pages of fairly intense detail – I checked my app to make sure I’d be able to get them all read before their due date. They are all due the first week of December, which was startling to me. December! December is many weeks away! I thought, before looking at the actual calendar and realizing that no, it’s ten DAYS away. 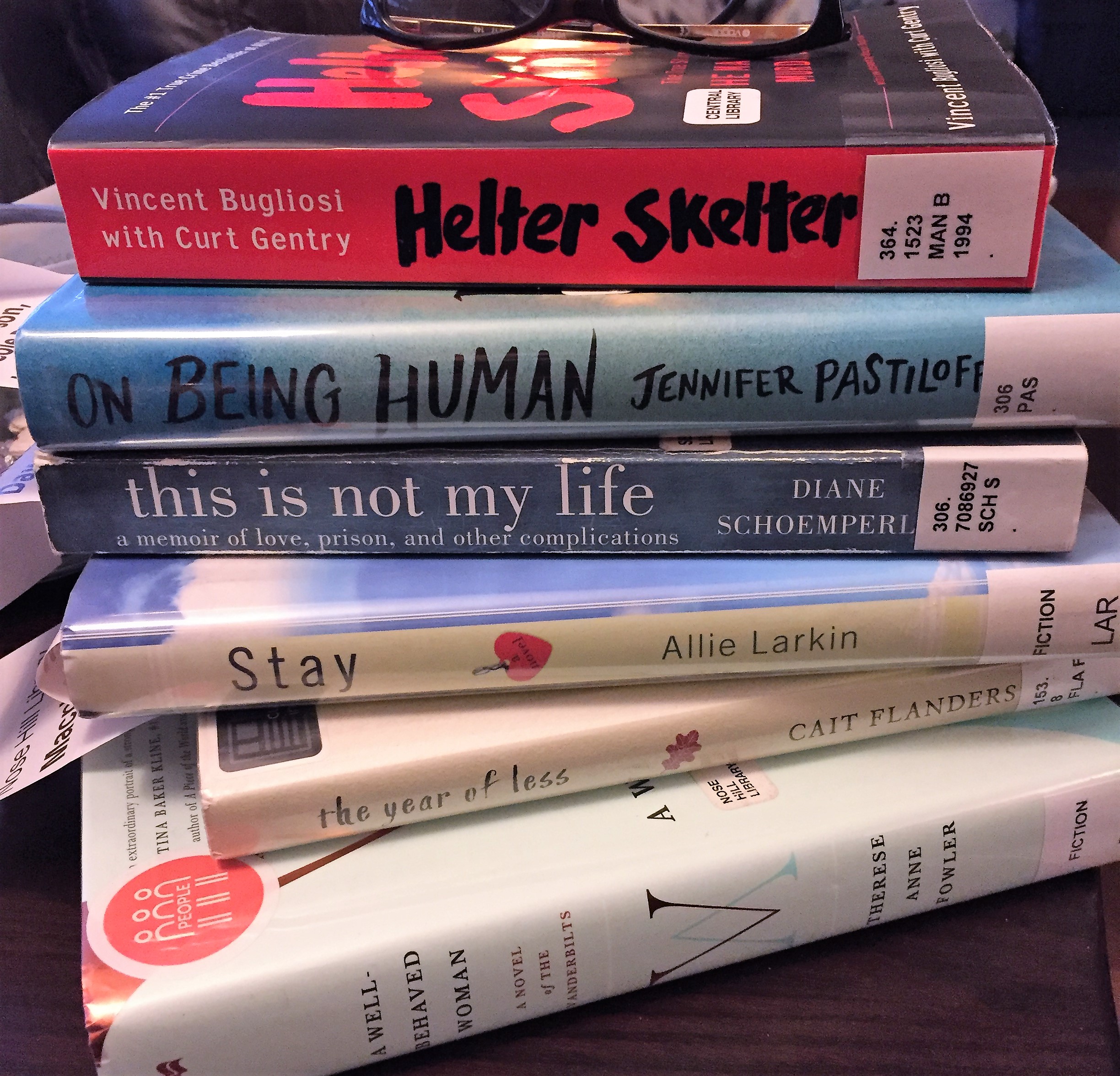 I did finish Helter Skelter, and you might wonder why I would even read such a thing, given that I don’t watch the news, I rarely log into the sewer that is Twitter, and I have snoozed everything on Facebook so much that my entire feed is either yoga related or photos of vacations, kids, and dogs. Just how I like it! I myself wondered why I was reading Helter Skelter literally every time I picked it up, and I still don’t know. It’s something I’ve been thinking about reading for about thirty years, and let me tell you, my life has not been enriched by the experience. Not only is it incredibly disturbing on any number of levels, it got me thinking about the importance we place on decades, ending and beginning. The Sixties were a very strange time, what with all the communes and free love and youth runaways and my god, the venereal disease. This book contains a LOT of information about the latter; did you know that Charles Manson and his harem of girls lived for a while with Dennis Wilson of the Beach Boys? Wilson ended up spending a lot of money on penicillin for the “case of clap that never went away” and you know what, guys? Have a shower. Wear a condom. Good lord. That’s just a sidebar to the most horrific and unsettling details I’ve ever read, and as such I probably wouldn’t recommend this to anyone. Why did I read it? WHO KNOWS. Not to mention that every time I looked at the cover I would get when I get to the bottom I go back to the top of the SLIDE then I stop and I turn and I go for a RIDE in my head, over and over, which is not good for anyone.

Two books I would recommend, though: 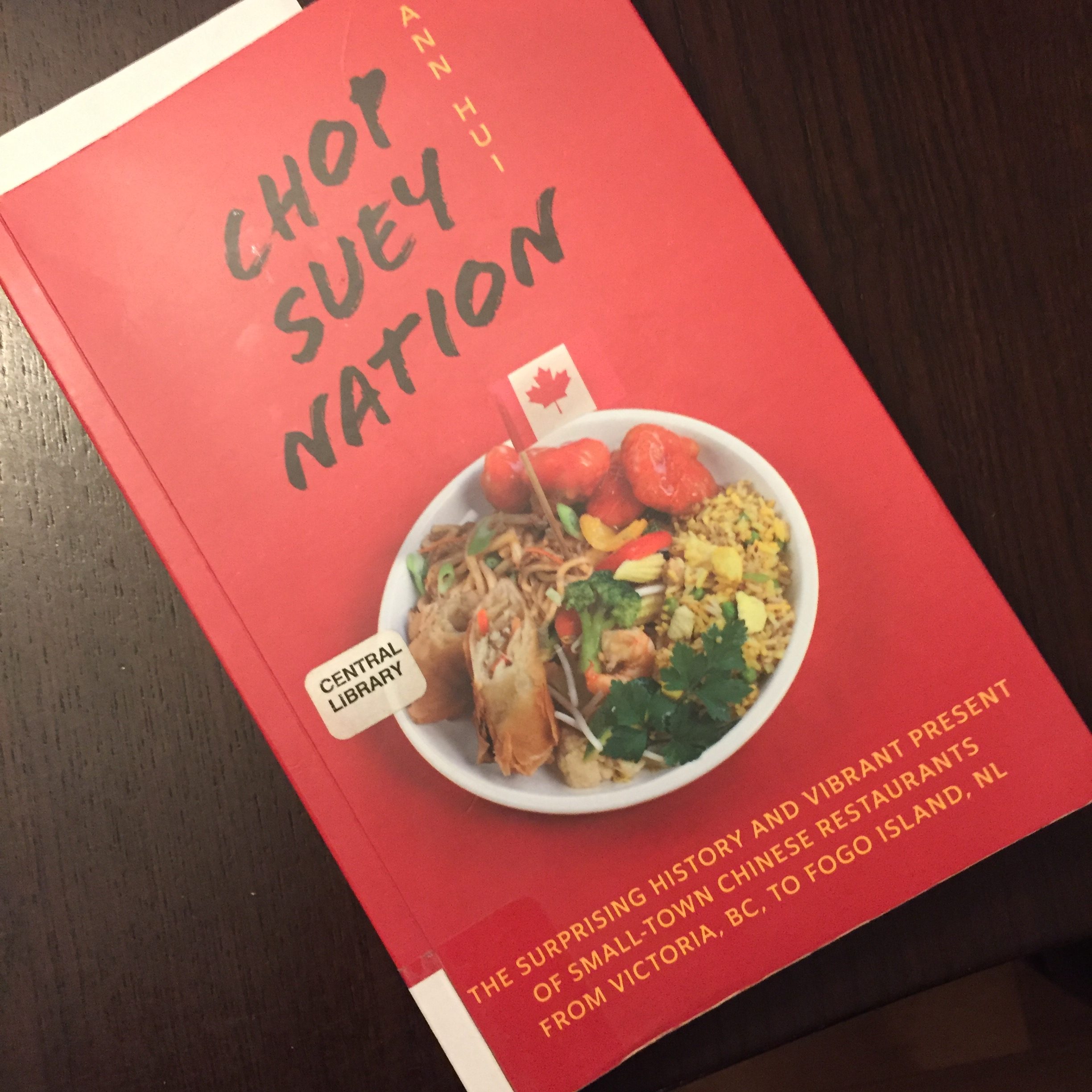 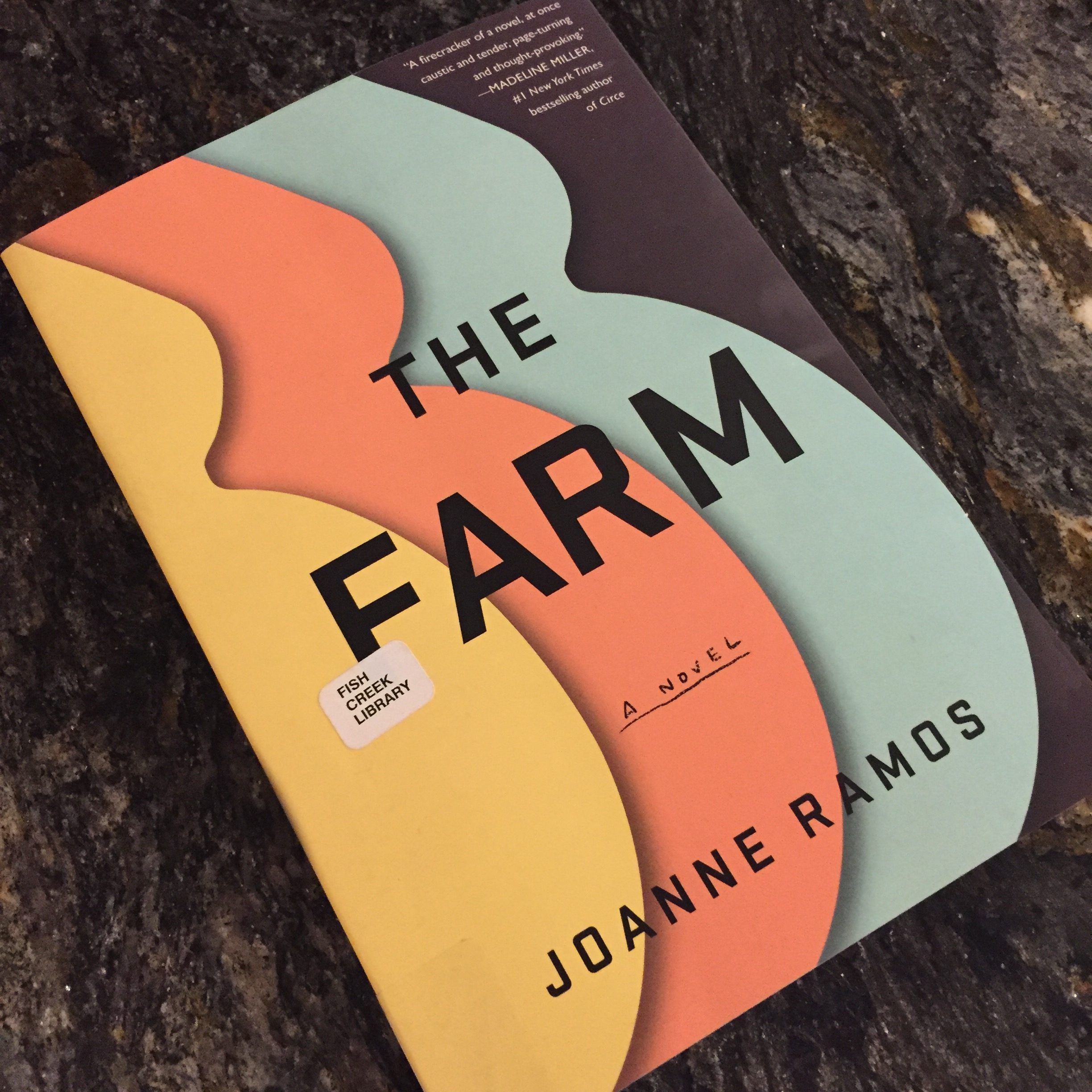 Chop Suey Nation was so interesting, especially as I am a Prairie girl – those Chinese-Western smorgasbords are ubiquitous all across the Prairies. I’ll always fondly remember visiting a crude oil terminal in small town Alberta as part of my then-job; the guys at the terminal took me to the local restaurant. Over my plate of fried rice, I watched as Larry slathered Thousand Island dressing on his egg rolls. Fusion cuisine before its time! Larry was also the fellow who told me about hitting a deer with his truck on Christmas Eve; the poor thing was not dead, but badly injured, and Larry did not, as he often did, have his gun in the truck. He had to wait to flag down a friend, and after the mercy deed was completed, got back into the truck where his hysterical young children assumed that Daddy just shot one of Santa’s reindeer.

Well. That lost something in the retelling.

As a caveat, neither my cousin Karen (HI KAREN) nor my friend Julie (HI JULIE) liked The Farm. I loved it, though. It WAS a bizarre concept: girls kept on a “resort” to be surrogates for the uber-rich, but as page-turners go, it was excellent.

Why do we call them page-turners? Isn’t that just how books work? Anyway. You all know what I mean.

The season for socializing has started with a bang. Last weekend we had a lovely dinner and games night at my friend Denise’s (HI DENISE) and I will be thinking about those vegan mushroom/ cheese phyllo pastries for many weeks to come. We played Cards Against Humanity, which I had heard much about and had never done before, and it was an absolute riot. Now all I want to do is play the game and eat vegan phyllo pastry. My favourite Q: Why does my back hurt? A: Feminism.

Tomorrow I’m going out with the moms of my son’s friend group; last week a few of the friends were over at my house for our Customary Friday Afternoon Cinnamon Waffles. I said to them, “I’m going out with ALL of your moms next week! Mom’s Night Out! Woot woot! It’s going to be lit!” and all of the boys just stared at me silently for several seconds, before turning their gaze waffle-ward. Not one of them responded, although one gave an awkward smile before shoveling waffle into his mouth.

I hope you all have a lovely weekend; I shall report back on just how lit Mom’s Night Out was. xo