I love being a woman, make no mistake about it, but sometimes I wonder what it would be like to be a man. I know, objectively, that men do feel concern about their appearances, just like the rest of us. I’m sure men harbour feelings of dissatisfaction with their looks; perhaps they look ruefully in the mirror, noticing thickening waists or thinning hair. But one thing I know for sure is that they do not spend a week every four to ten weeks wondering if they are getting their period or if they are as hideous as they think they are.

It’s just not fair, is it? As if it is not enough that we spend that week bloated and exhausted, irritable and emotional, but we also apparently develop vision issues that cause us to look in the mirror with self-loathing, or, at the very least, Extreme Dissatisfaction. If you polled ten million women on the week before their periods, and asked them to rate on a scale of one to ten their satisfaction with their appearance, only one woman would say Very Satisfied, and that woman would be Giselle Bundchen. The rest of us would oscillate between Somewhat Dissatisfied and I Hate Everything Especially My Stupid Hair.

As a note, I do NOT Hate My Hair. In fact, as my layers have grown out over the past ten months, I have felt Very Satisfied with my hair, for the first time ever. My hair therapist is a brilliant woman who has made this Life Journey with me not only painless, but very pleasant. However. HOWEVER. This past week – pre-ladies’-holidays – I have going back and forth in my mind about – get ready – possibly growing my hair long. Or longer. You would not believe the amount of brain power and energy I have put into trying to answer the question Should I grow my hair longer or should I keep it this length? I feel like I could put this to a team of debaters at the high school. Resolved: Nicole’s Hair Should Grow Another Three Inches.

It’s not like the consequences are particularly dire either way. Intellectually I know that a) I like it this length, and so if I left it like this I would be happy, b) if I grew it longer I might like it like that too and as an added benefit, would require fewer bobby pins to put it in a bun, and c) if I grew it out longer and I DIDN’T like it, I could have it cut back to this length. In all cases, the end result is Happiness and Being Very Satisfied. And yet it feels like a Major Life Decision That Will Affect Everything And Possibly Have Disastrous Results. For the amount of thought I’ve been putting into this, oscillating back and forth between Grow Longer and Status Quo, I could have penned the Great Canadian Novel, written a mathematical proof for game theory from first principles, and finished an entire book of Sudoko puzzles.

I probably would even have energy left over to figure out how to change traffic behaviour around school zones, which would be the most complicated thing of all. I breathed a sigh of relief when I no longer had children at the elementary school; people would pop out from between parked cars or buses, kids in tow, to jaywalk right through traffic to get to school, rather than use the clearly marked, patrolled crosswalk less than twenty metres away. Cars would stop in bus zones or do u-turns in the middle of traffic, to much honking and distress. Harried drivers would speed through said marked, patrolled crosswalks nearly missing pedestrians and my children, who were school patrols. At least, I thought, when I got to junior high things would improve. Reader, they did not. The junior high is on a hill and there are still people parking in bus zones and doing u-turns, but on the hill it is so much worse. A friend witnessed one woman taking a u-turn in the middle of winter and then losing traction, she slid sideways down the hill, narrowly missing several parked cars before hitting a snowbank, which was thankfully high enough to protect the people on the sidewalk. Not to mention that school starts at 7:50, and so it is dark much of the year. There’s nothing like wondering if a kid dressed all in black is going to pop out in front of you as you careen down an icy hill.

Now that my older son is in high school, the only real hazard appears to be the teens themselves, travelling in herds across the street, heads down, looking at their phones. I seem to have more patience for them than I do the weirdly illegal driving maneuvers.

Speaking of sons, the birthday party on the weekend was a huge success. All of his friends are really great kids and they all seemed to have a good time. I find it much easier to have a houseful of teen boys than younger kids, that’s for sure. At one point they all headed to 7-11 for Slurpees and I could have really done without the information that there were more shopping cart races, and I could have REALLY done without one of my sons showing me a VIDEO they had taken of said races. I had to do some deep breathing, thoughts of concussions and broken teeth and everything else in between going through my head. Om shanti. There are only so many times you can bring up CONCUSSIONS and BRAIN INJURY and WE SPENT MANY THOUSANDS OF DOLLARS ON THOSE TEETH AND IF YOU BREAK THEM I AM GOING TO BE VERY UPSET.

That reminds me of when I was just a sweet young thing at the bar, and a friend of my then-boyfriend was dancing with a very attractive girl. This friend ended up being punched in the mouth by that girl’s boyfriend, and as a result, he lost one of his front teeth. Being twenty-one and toothless was bad enough, but this guy had braces in his teens, so imagine how his poor mother, a single mom who would have scrimped to pay for braces, must have felt. In a small-world coincidence, I ran into this guy only a few years ago, at junior high orientation night. He had a full smile so I guess the tooth implant worked out in the long run.

My main activity this weekend – other than post-party stress about shopping cart races and extreme relief that no kids were concussed and/ or left toothless – was baking. I baked cupcakes for the party and then a fancy layer cake with strawberry filling and chocolate ganache for his actual birthday dinner. They turned out well! 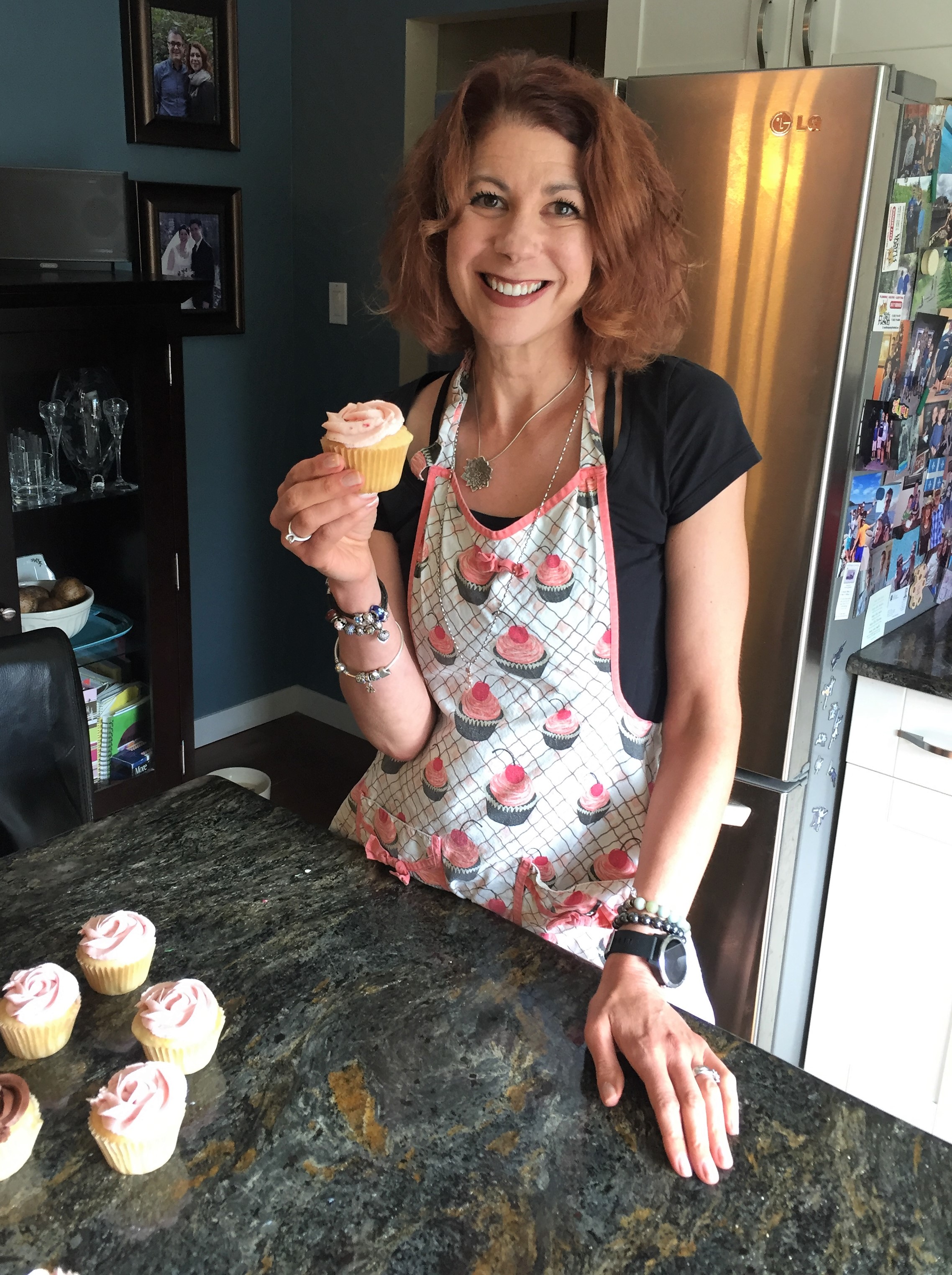 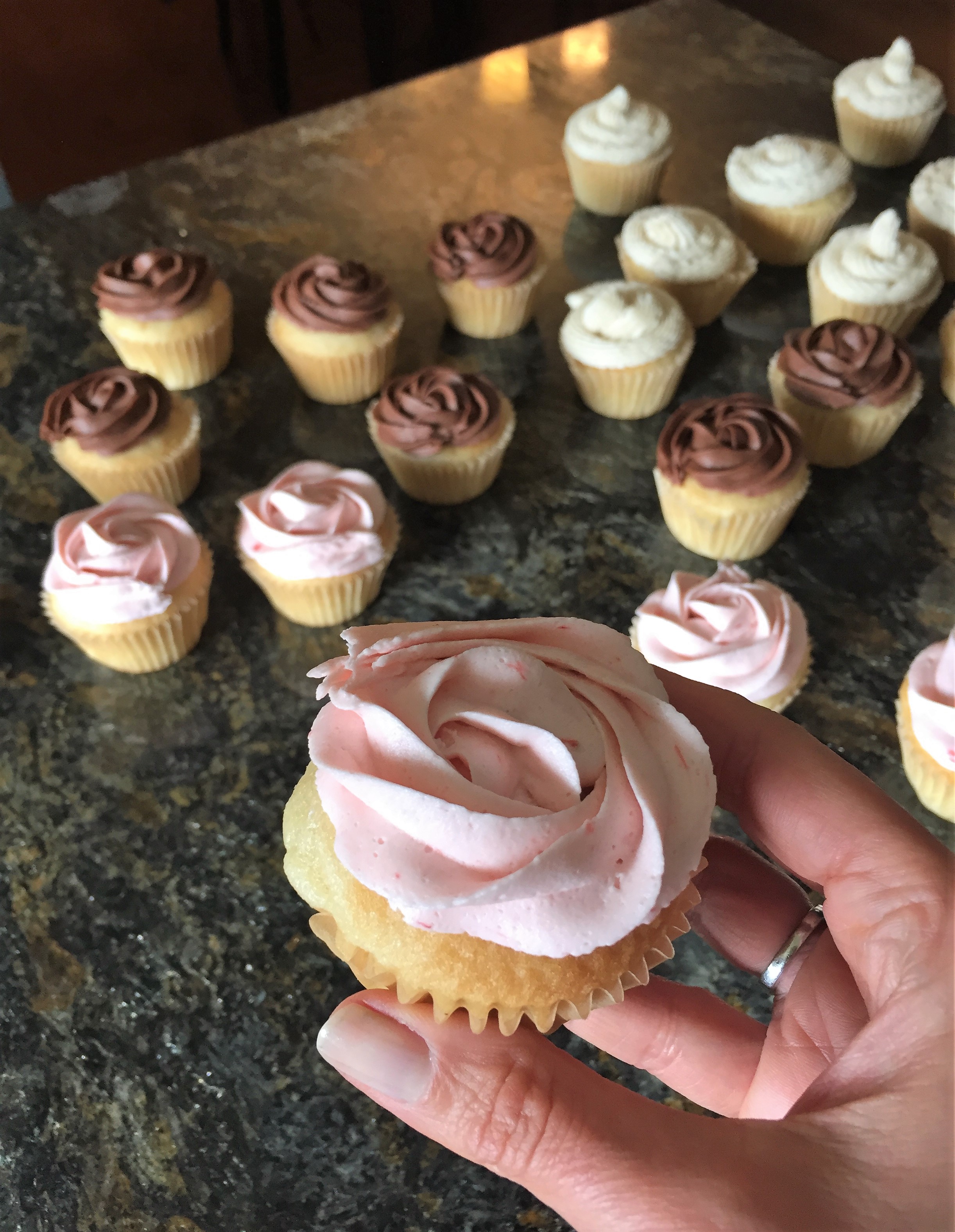 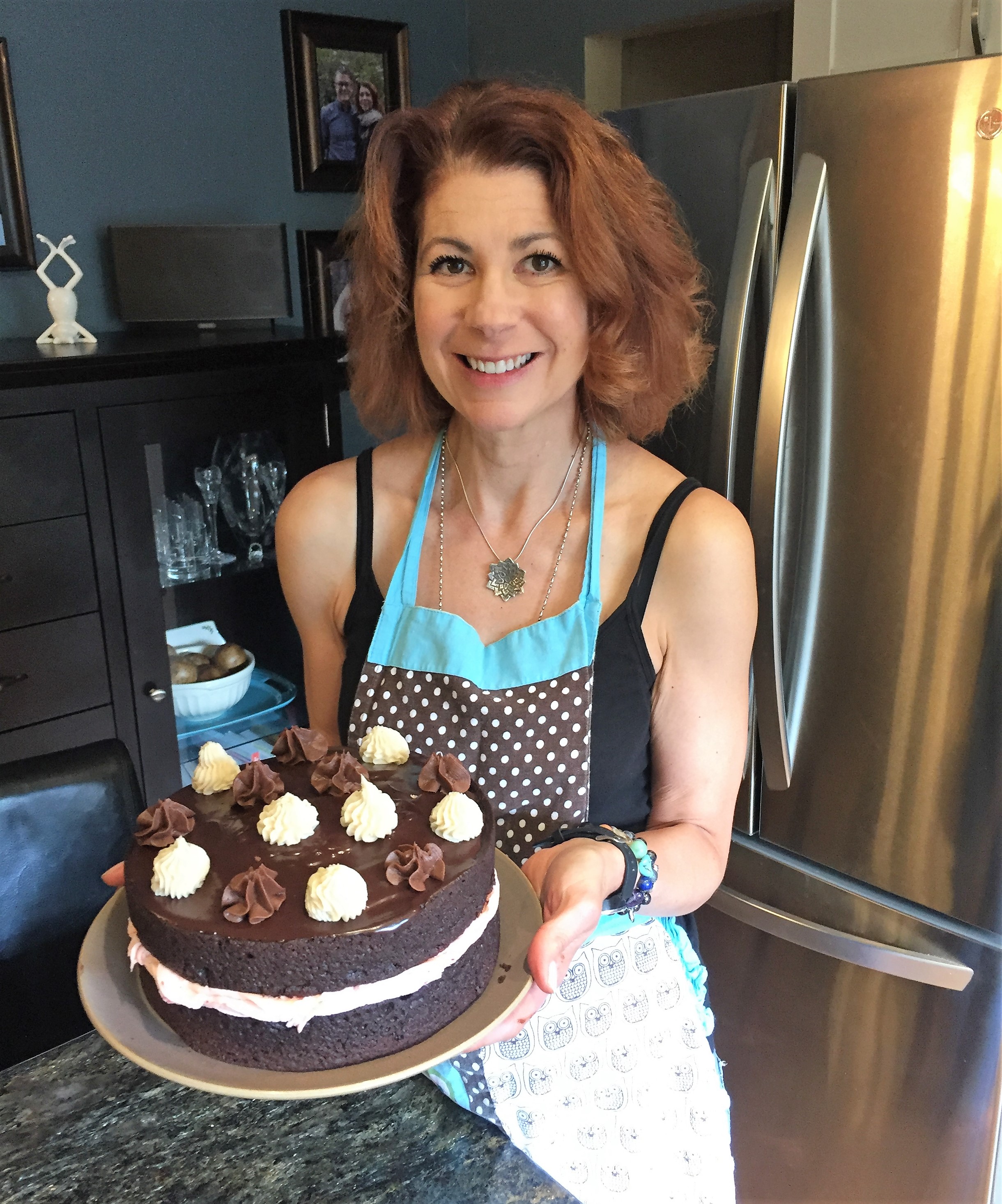 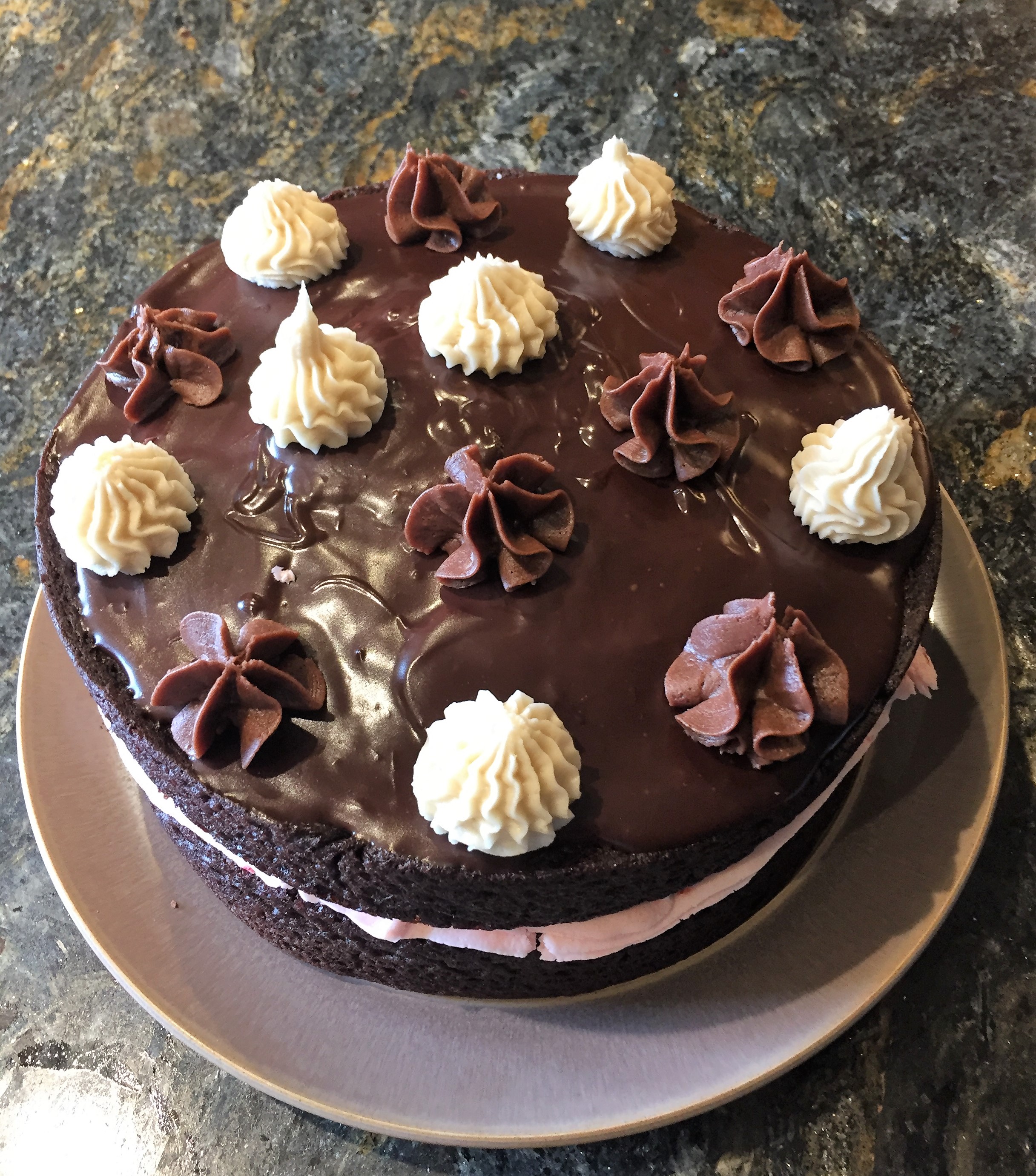 Hope your week is just as sweet as birthday cake, friends. xo