Thank you EVERYONE who reached out to me after my disastrous week. Friday at 4:45 I was pouring myself a very generous glass of red, and after three (large) glasses I ended up going to sleep at 8:30 pm. My husband looked at me nodding off on the couch as we watched a documentary on travel in Ireland, and gently suggested that maybe I would be more comfortable in bed. Maybe! Maybe I would be. Zzzzz.

After a nice solid ten hours of sleep, I felt like a new woman. After all, everything was okay. The new orthodontist fixed my son’s broken bracket, and mentioned that of all the patients he has seen from the scandalous fallout of having a criminally unethical bankrupt orthodontist, we are the luckiest ones, the ones who are the least-worst-off. I am breathing a sigh of relief that I had rescheduled my son’s appointment due to his snowboard day at school; if I hadn’t done that, we would have been much worse off. As it was, I called the office manager of the interim orthodontist, the woman who had been so helpful to me during all this, and told her that she had behaved ethically and with integrity, and I was very appreciative of her. She said I was the only person who had said that, and that mostly she was dealing with, well, a mess and some very angry and distraught parents. As well you might imagine, but it wasn’t her fault.

You never know when a little kindness will help lift a person up. In the midst of all this, I baked my usual heart-shaped cookies on Wednesday; no matter what else, I felt that Valentine’s Day must not go unmarked by the baking of thematic cookies. I took some in to the new orthodontist office for the staff, and I’m not saying that THAT is the reason I was able to get my son in get his bracket fixed on the Teacher’s Convention Friday before a long weekend, but I’m not NOT saying that either. I’m just saying, being kind helps. 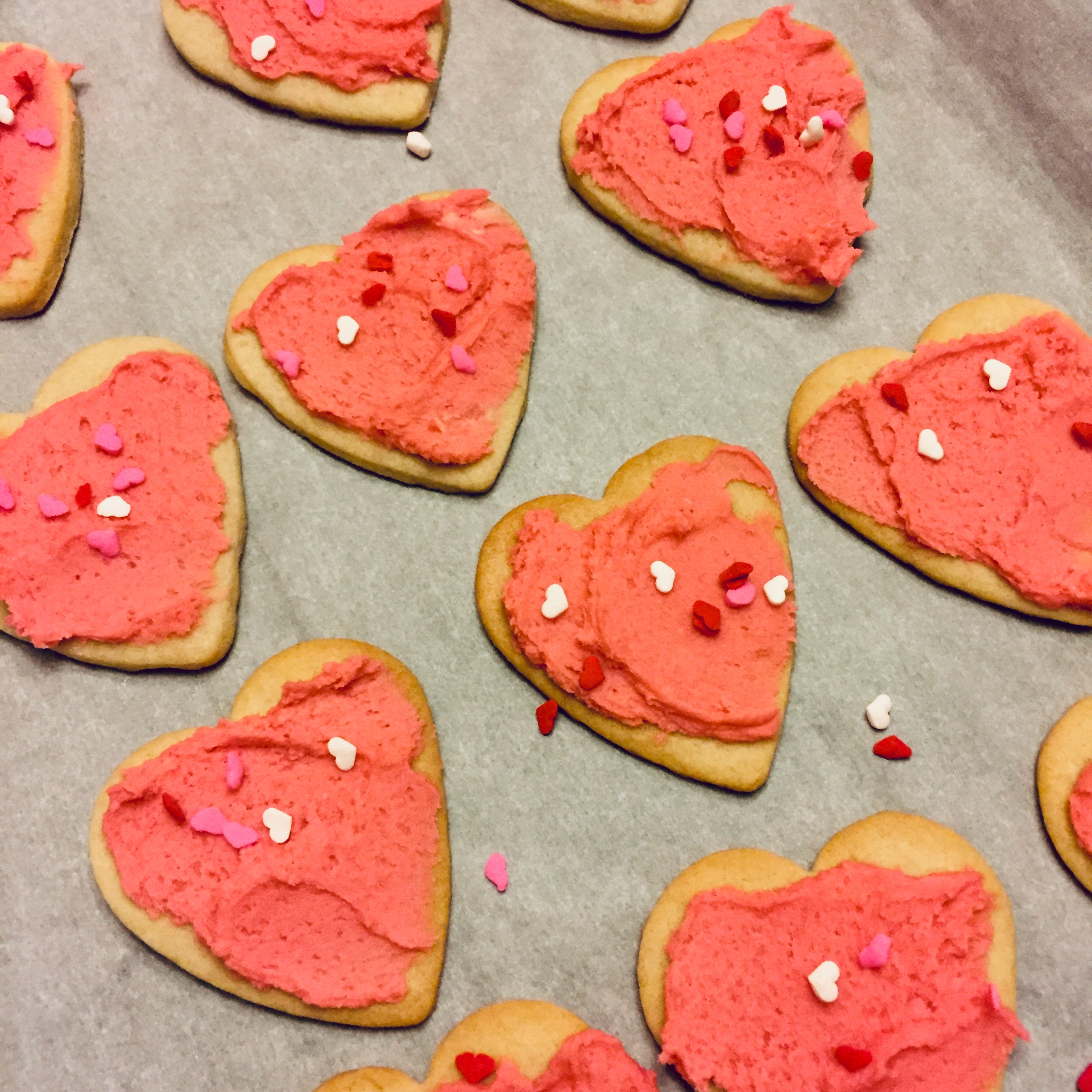 It’s been a short week – I can’t believe it’s already Thursday! – and it has been a good one. We had some Very Good News from a medical standpoint, which decimated my Very Big Stressor. We had two days of not-terrible temperatures, and although we are back in the thick of it, cold-wise, just having a two day respite was enough to buoy me up. Then, yesterday I was pushing my very heavy grocery cart through the not-yet-plowed parking lot at Superstore. The snow was thick and very soft, and my torso was literally horizontal as I pushed through. Effort-wise, this is the CrossFit of grocery shopping. Finally the cart got stuck and I could not budge it, not at all. It was only three cars away from my car so I abandoned it and started to take my bags and bins, one by one, to the car. A man who was in the midst of plowing the parking lot, but was in another row, noticed. He stopped his plow and RAN over to help me, dragging the cart backwards to my car. It was such an unexpected act of kindness; there are many good people in the world, let’s remember that.

Speaking of groceries, it’s time once again for Eating a Rainbow! As I mentioned in my meal plan, I make some kind of stir-fry once a week. There are three types I cycle through: Pad Thai, Thai Coconut Curry, and what is known in this house as Noodly Stir-Fry. There are two common threads in these meals: a) I use about 10 cups of vegetables for each – if you want to eat more veggies, you need to cook more veggies, is my motto, and b) the guys get sauteed chicken breast that is splashed with soy sauce after cooking. As for vegetables, I use a combination of carrots, mushrooms, peppers, and, with the exception of Noodly, broccoli.

I wrote about this long ago at YMC, but it has evolved quite a bit from then. Start with the veggies, as above, and chicken, if you’ve got meat-eaters. Or “carnies” as I will forever call them.

Make the sauce: mix together 1/4 cup each seasoned rice vinegar and soy sauce. Whisk in 1 teaspoon of cornstarch. Add 3 tablespoons each sesame oil and lime juice. I also use a tablespoon of brown sugar, but I realized that I forgot the sugar this past Tuesday and no one, including me, noticed. So possibly omit. Then stir in a heaping teaspoon or maybe two of chili garlic sauce. In a large wok, pour 2/3 of the sauce over the vegetables and cook until tender-crisp – this usually takes me 10 minutes, no more. Don’t overcook unless you like soft veggies. Then add cooked rice stick noodles – I use a 250 gram package, but I think I need to up that with growing kids who love this meal and leave almost no noodles for my husband and I. I drizzle sriracha sauce over mine, and add 1/4 cup cashews and some fresh cilantro from my little downstairs grow-op. I’m using the old YMC photo because hey, I never stage my food anymore and it looks really pretty. 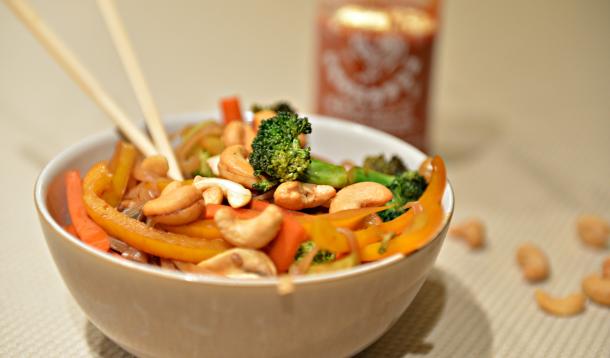 To make the sauce for this, I copied from my friend Melody (HI MELODY) years ago, and have made it my own. Take a veggie stock cube – I use one of those squishy ones from Knorr – and add about 1/4 cup of water. Then I put a few squirts of Bragg’s Soy Seasoning in; how much is a mystery. Maybe a tablespoon or two? I don’t know. Then I add a tablespoon of brown sugar, a couple of pressed garlic cloves, and a whole bunch of grated ginger. I essentially grate ginger until it looks like an insane amount of ginger, then I grate some more. You might want to dial that back, if you’re not a fan of ginger. Mix in a heaping teaspoon or more of Thai red curry paste, and about 1/2 cup (full fat!) coconut milk. After that’s done, I throw in the mushrooms and about a cup of frozen edamame, and cook for a couple of minutes. Then I add the rest of the veggies and cook for 8-10 minutes, being sure nothing is getting gross or mushy. I serve this over rice, again with 1/4 cup cashews for me and some fresh cilantro. 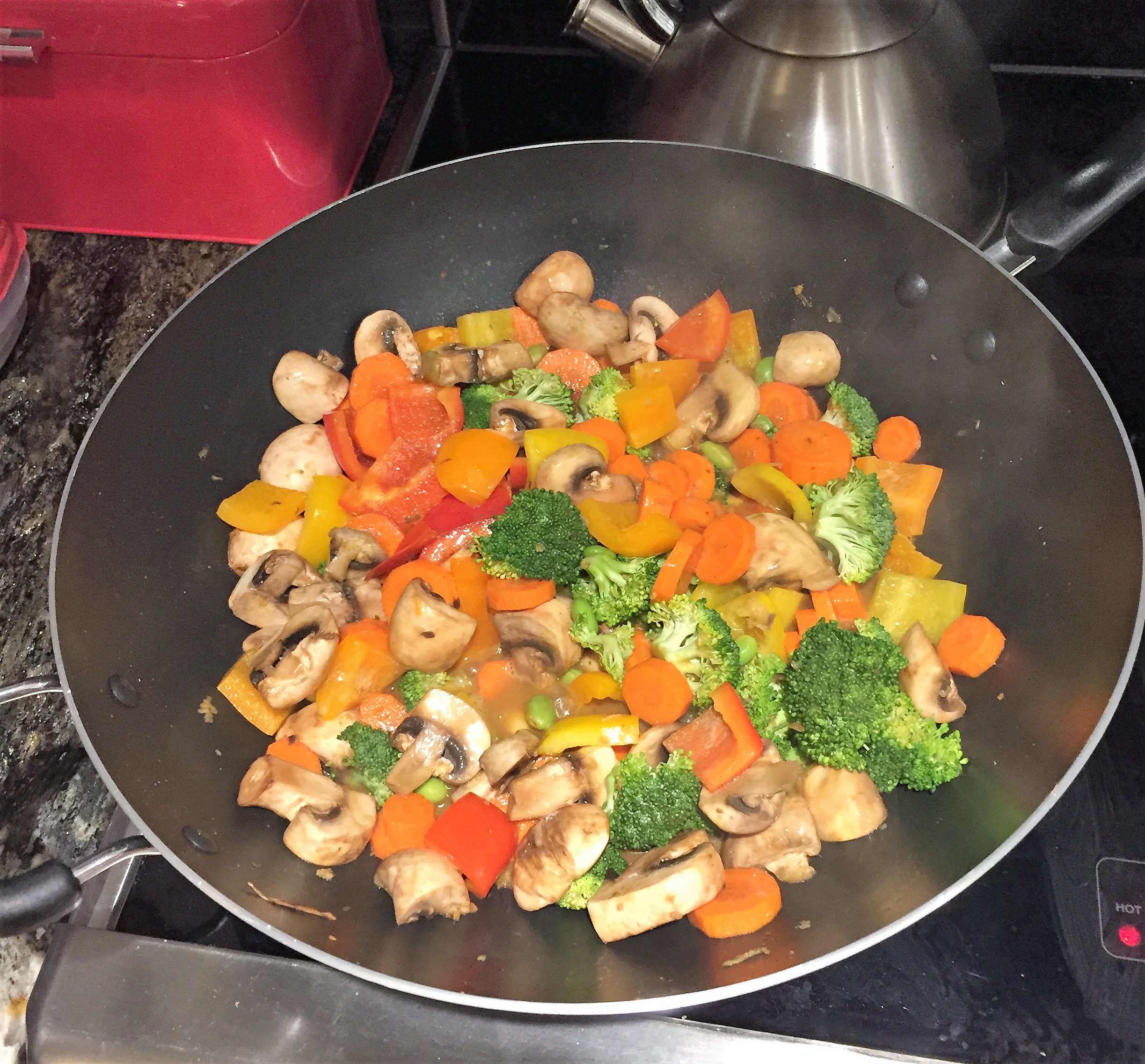 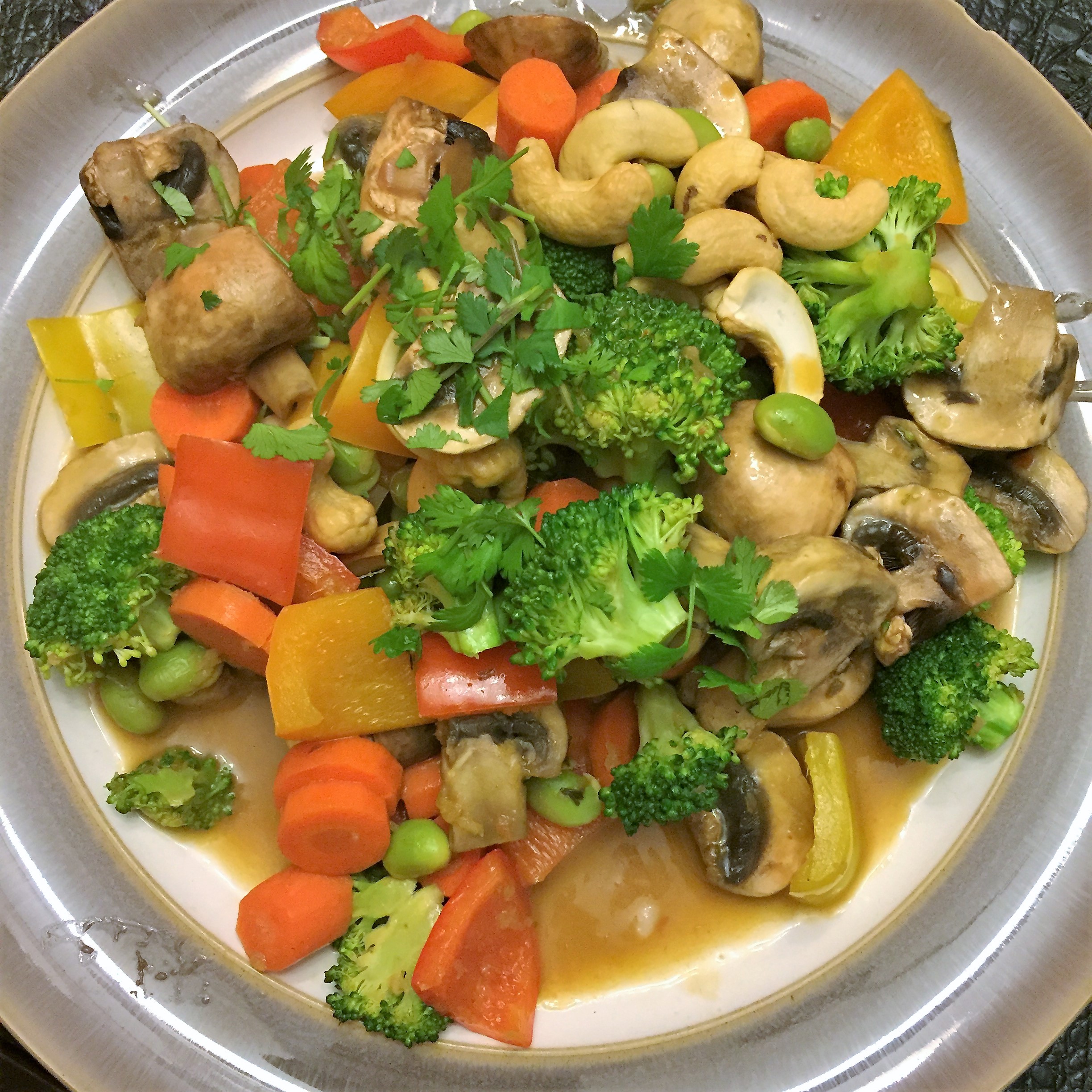 See, I really don’t stage things anymore. There IS rice underneath there, you just can’t really see it.

This one is probably my favourite, and it is not so much a recipe as a “recipe.” I pour some sesame oil – maybe a tablespoon – into the wok and add 2-3 cloves of pressed garlic and, once again, a ton of grated ginger. Like, a ton. Like a six-inch piece of ginger root. Again, this may or may not be appropriate for you, but it works in the ginger-loving Boyhouse. Then I put all the veggies in and douse generously with seasoned rice vinegar and soy sauce. How much? I have no idea. Maybe a 1/4 cup each, but I really don’t know. I never measure this recipe, I just pour. As I said before, measure with your heart, people, measure with your heart. Cook for ten minutes or so and then add in cooked noodles. I use the ones that are labelled “Chinese Style Steam Fried Noodles” and they take about 1 minute in boiling water to cook. I do a quick taste test and sometimes add a bit more sesame oil, rice vinegar, or soy sauce, and then I sprinkle my plate with cilantro and cashews, because I cannot get enough of either. Peanuts would be nice here too but I rarely use them. My older son uses a lot of sriracha on this dish, but no one else does. I guess he’s living the spicy life. 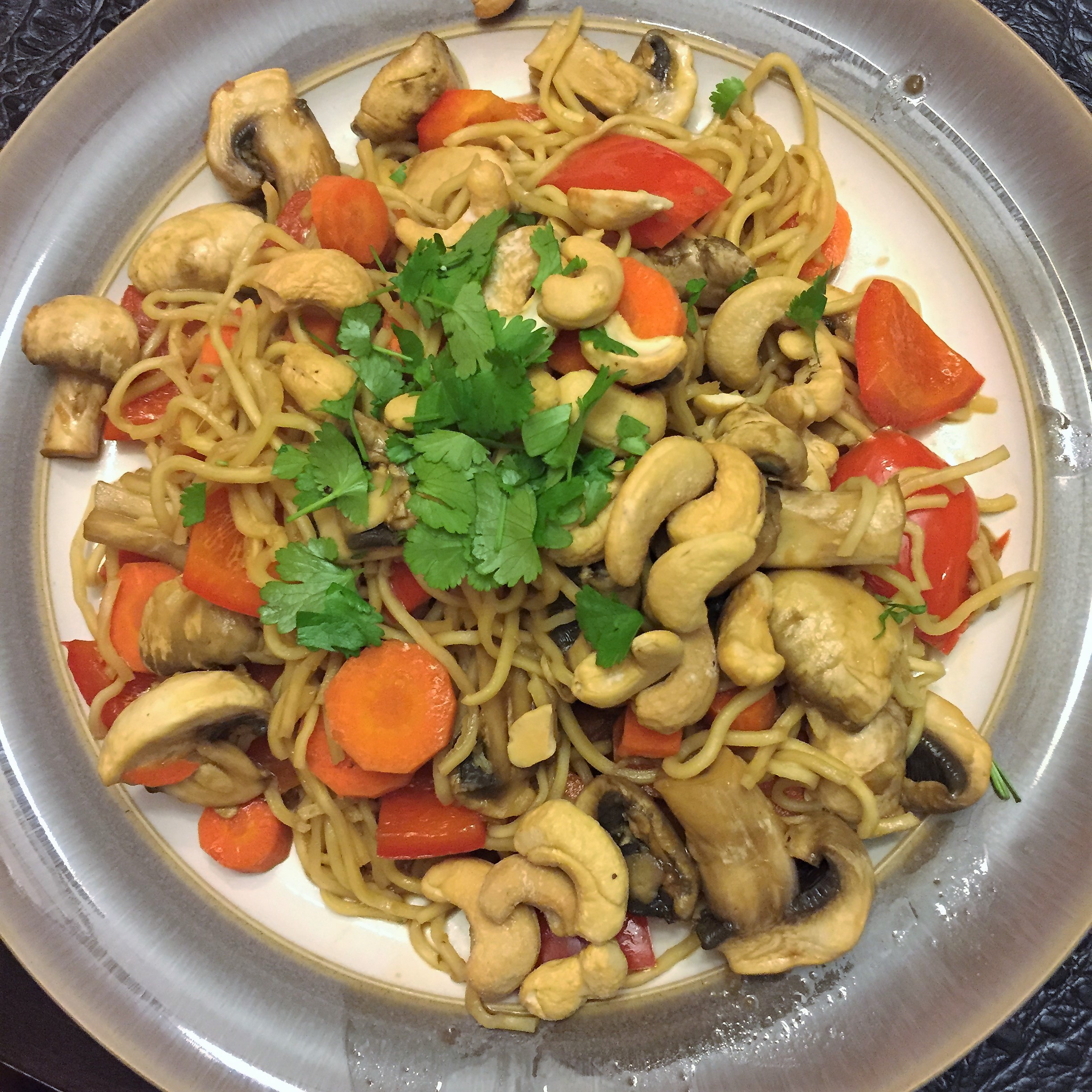 So there you have it! Stir-fry night, a very popular night in this house. Lot of veggies, lots of flavour, and very easy to put together. There is quite a bit of vegetable chopping involved, but I time this so it’s early in the week, when I have more dinner-making energy.