Yesterday I learned that it was National CB Radio Day – 10/4! That was a cheering discovery, and if I was a trucker in the 1970s, my handle would be Red Pepper.

Speaking of which, it’s funny; the song Personal Jesus by Depeche Mode, a song I listened to and enjoyed back in 1990 or so, has come on the radio every single time I have gotten into the car in the past week. Every single time. Is it enjoying a resurgence in popularity? I am sure I haven’t really heard it much at all since the early nineties, yet, here we are. Did all the radio stations suddenly collaborate to pull it out of obscurity? A few years ago I witnessed a similar phenomenon with I Just Came Back To Say Goodbye, which is a terrible song to have going in a loop in one’s head. It’s even worse than Your own. Personal. Jesus. Someone to hear your prayers. Someone who cares. over and over.

I have felt like I needed my own personal Jesus in the past few days, mostly because of this: 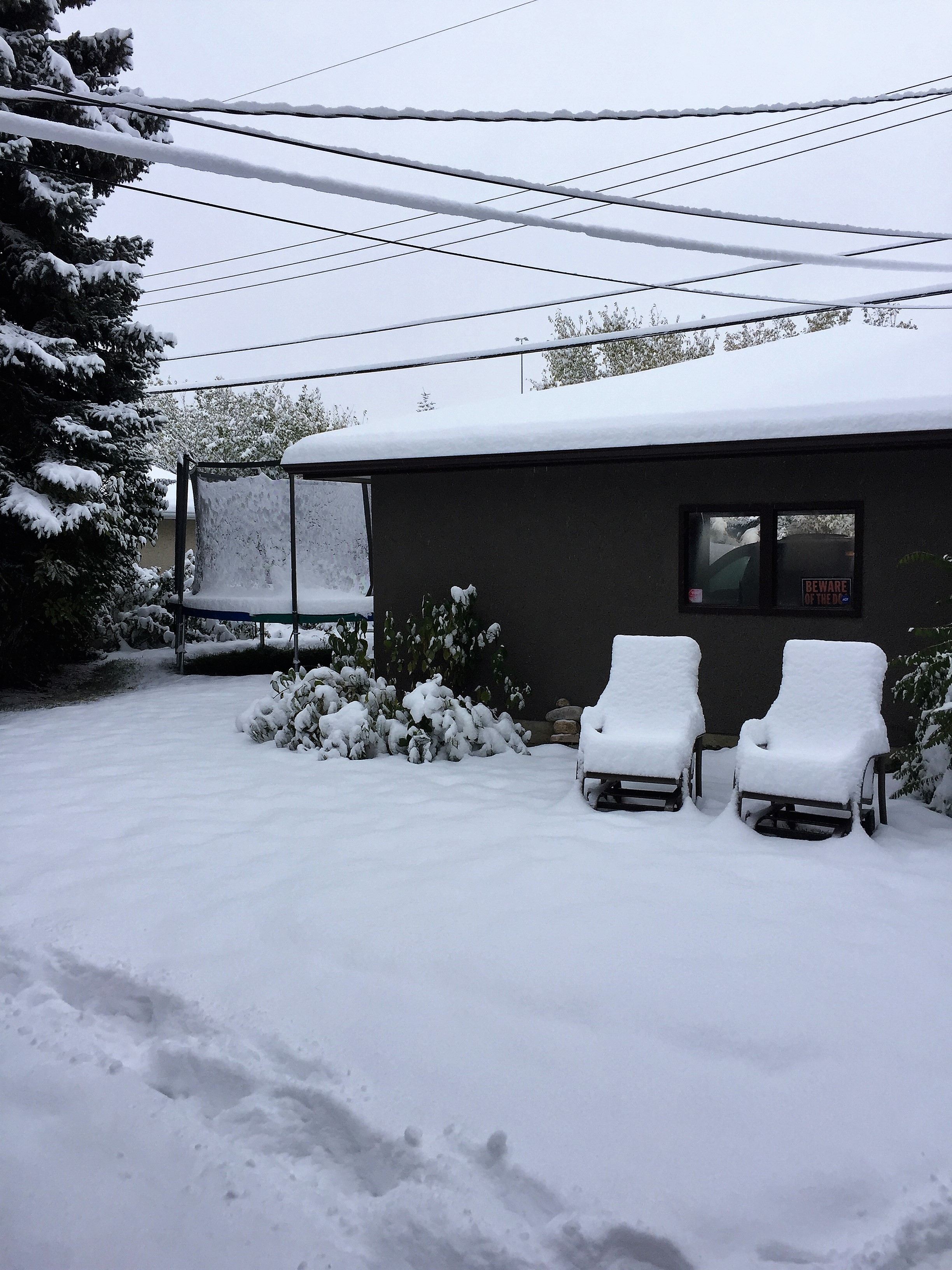 That was my backyard first thing Tuesday morning, and then about six hours later it looked like this: 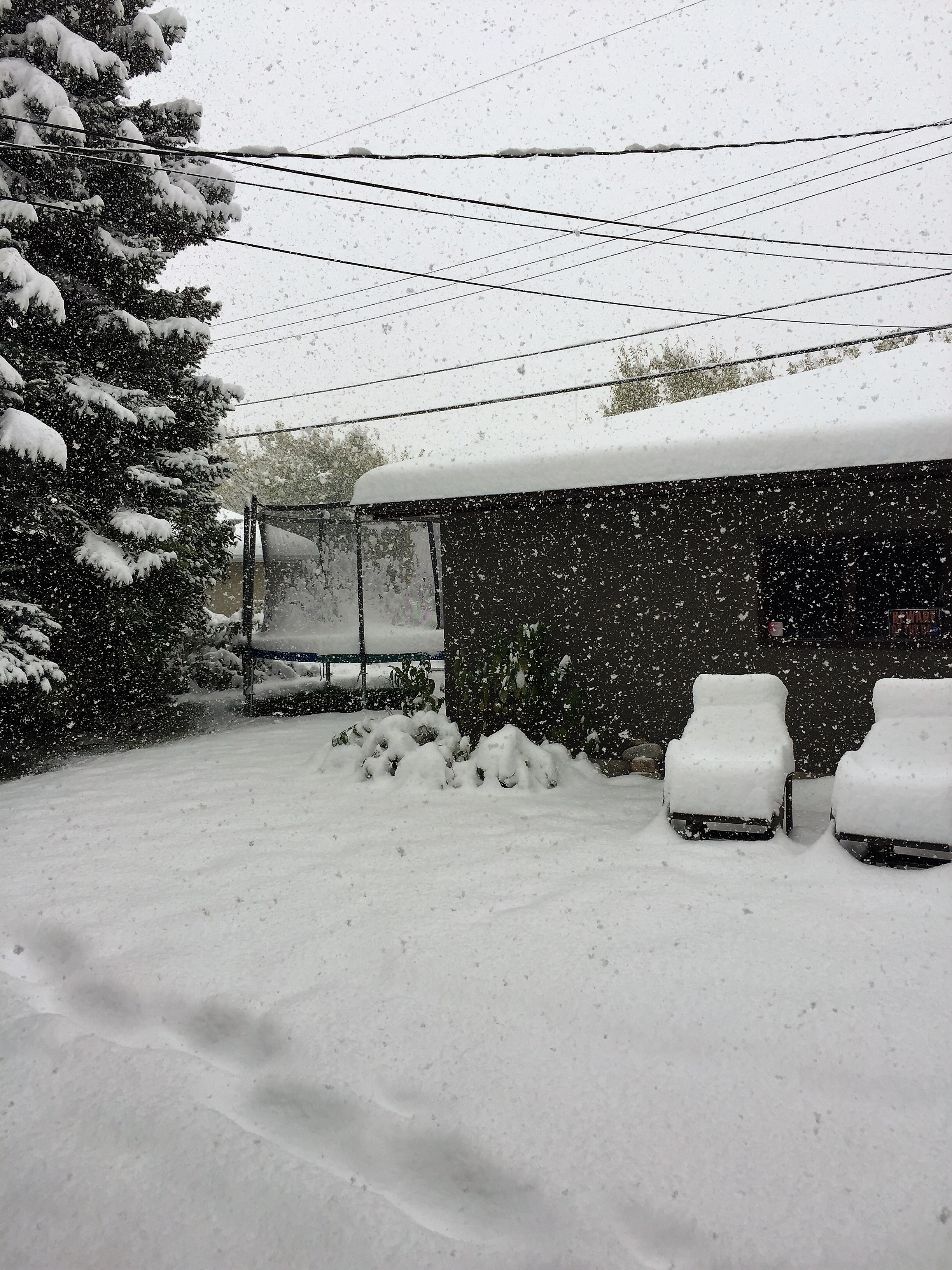 I stopped measuring after we hit twelve inches, because I only have a foot-long ruler, and I didn’t think the measuring tape would work. 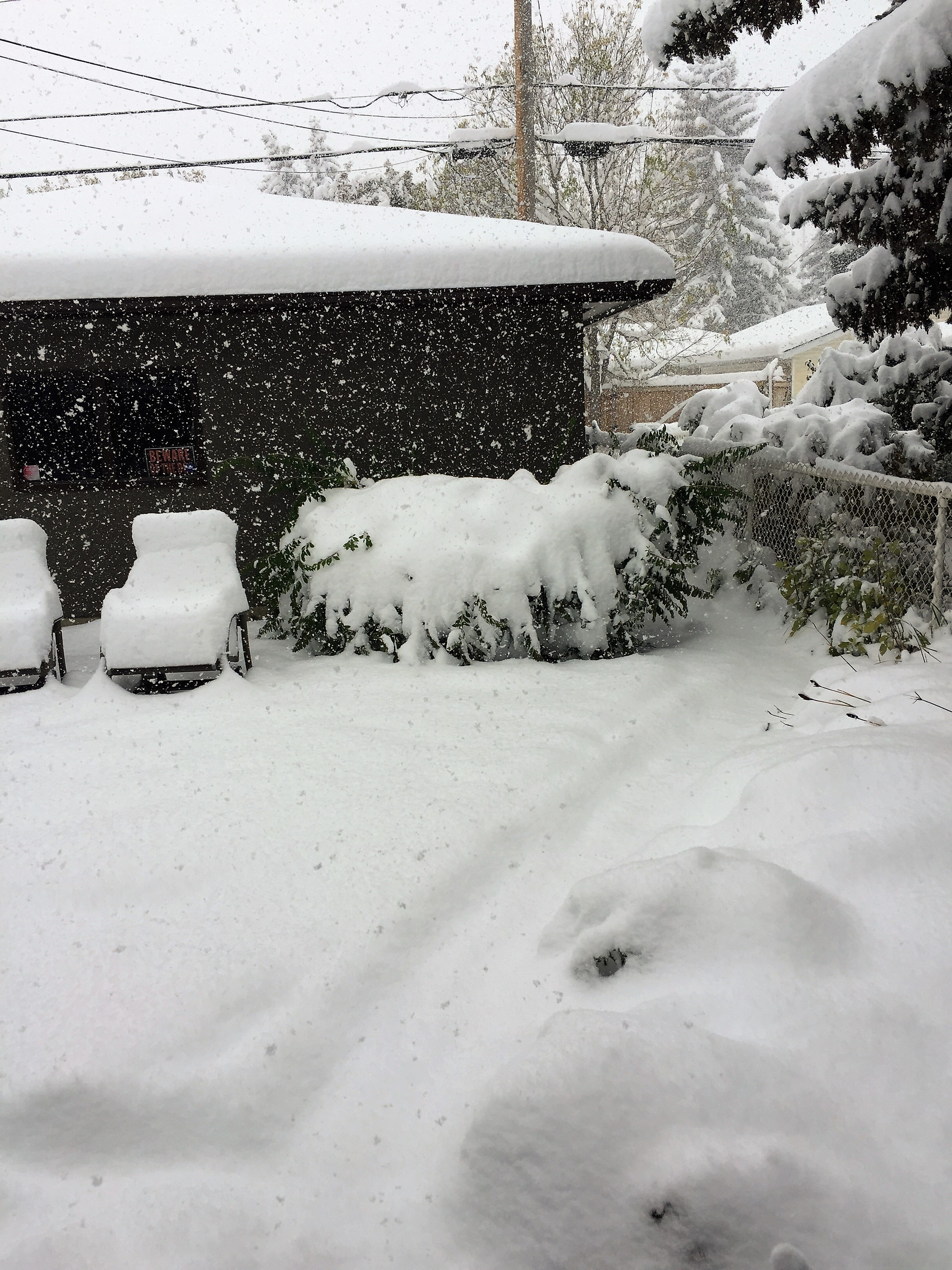 I’m not going to complain about the weather, I’m not going to complain about the weather, we can’t control the weather, we can only control our own reaction to the weather…I kept up with this mantra over and over, even while I wondered why I live in actual frozen hell. Complaining about the weather is very boring, not to mention depressing, and weather talk in general is only interesting to those directly affected, and so while I’m sure you would all be fascinated by my dog walk that featured snow-laden branches completely giving way and dumping snow all over me not once, not twice, but five times in a thirty-minute walk, and how I actually calculated the calories burned by shoveling snow that felt like it was 100 pounds per square foot, I will abstain. Sort of.

It’s almost Thanksgiving! This is as early as it can possibly be, and I really do want to take the time to be mindful and thankful, even while I am completely depressed about the fact that I live on Planet Hoth and all of my frozen plants are covered in snow and probably will be for the next nine months. That was not being mindful and thankful, Nicole.

Positive thoughts! Positive thoughts! Let’s segue into Nicole’s Favourite Things, shall we! I missed September, so will smoothly combine it with Thanksgiving which is, in my humble opinion, kind of a lame holiday. I dislike pie in general; pumpkin pie is particularly abhorrent to me. Even when I did eat meat, I never liked turkey dinner; as a plant-based person, it is now, how shall I put this, very un-fun. But it’s not all about the food, is it? Well, it kind of is. I do like the thought of being thankful for things, which is something we should do every day, and Thanksgiving gives us a good reason to remember all those things for which we are thankful. So, here we go!

I’m sure glad I took this photo last week, because those same shrubs are now sagging under the weight of the snow. Sorry! I can’t seem to stop complaining. But they are pretty, aren’t they? 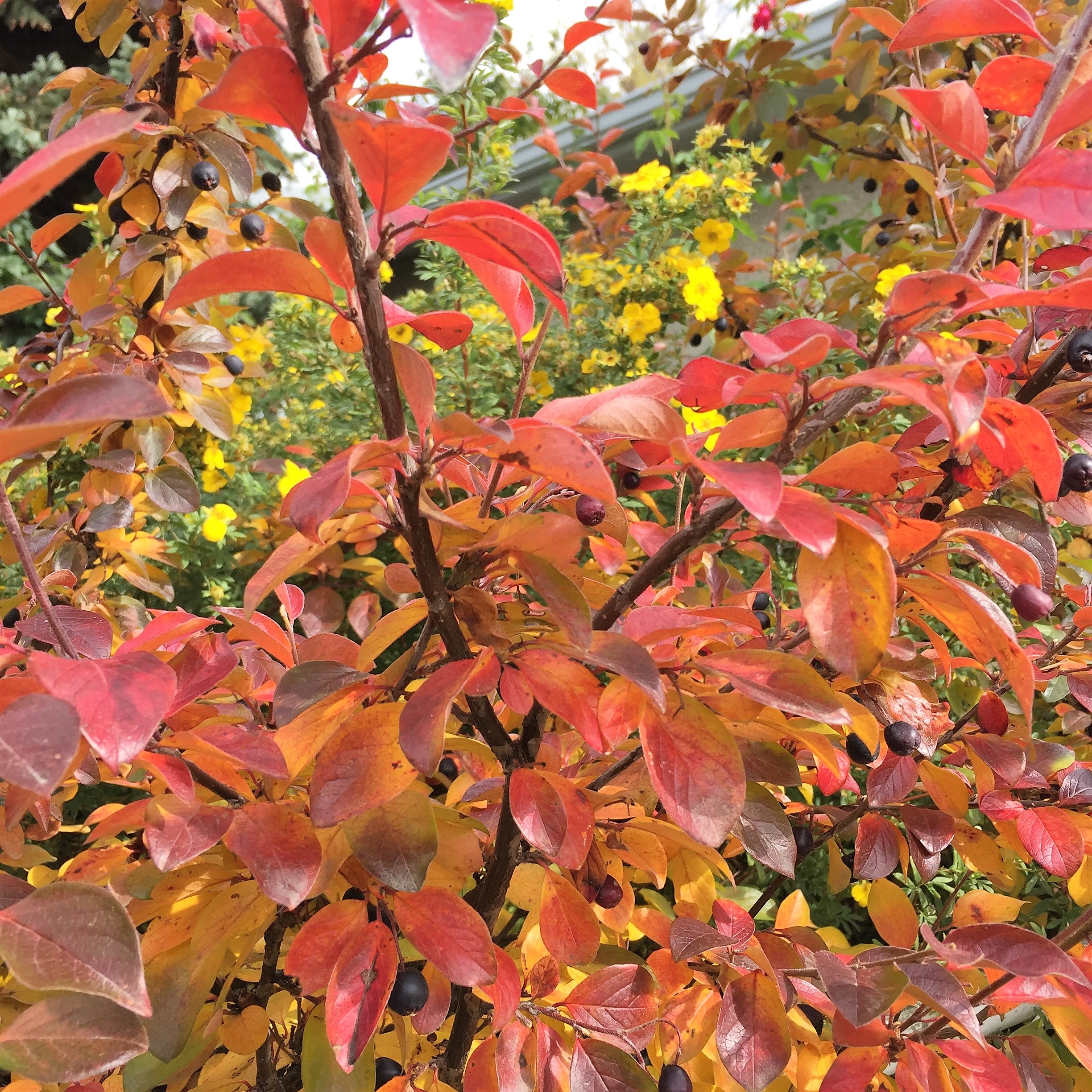 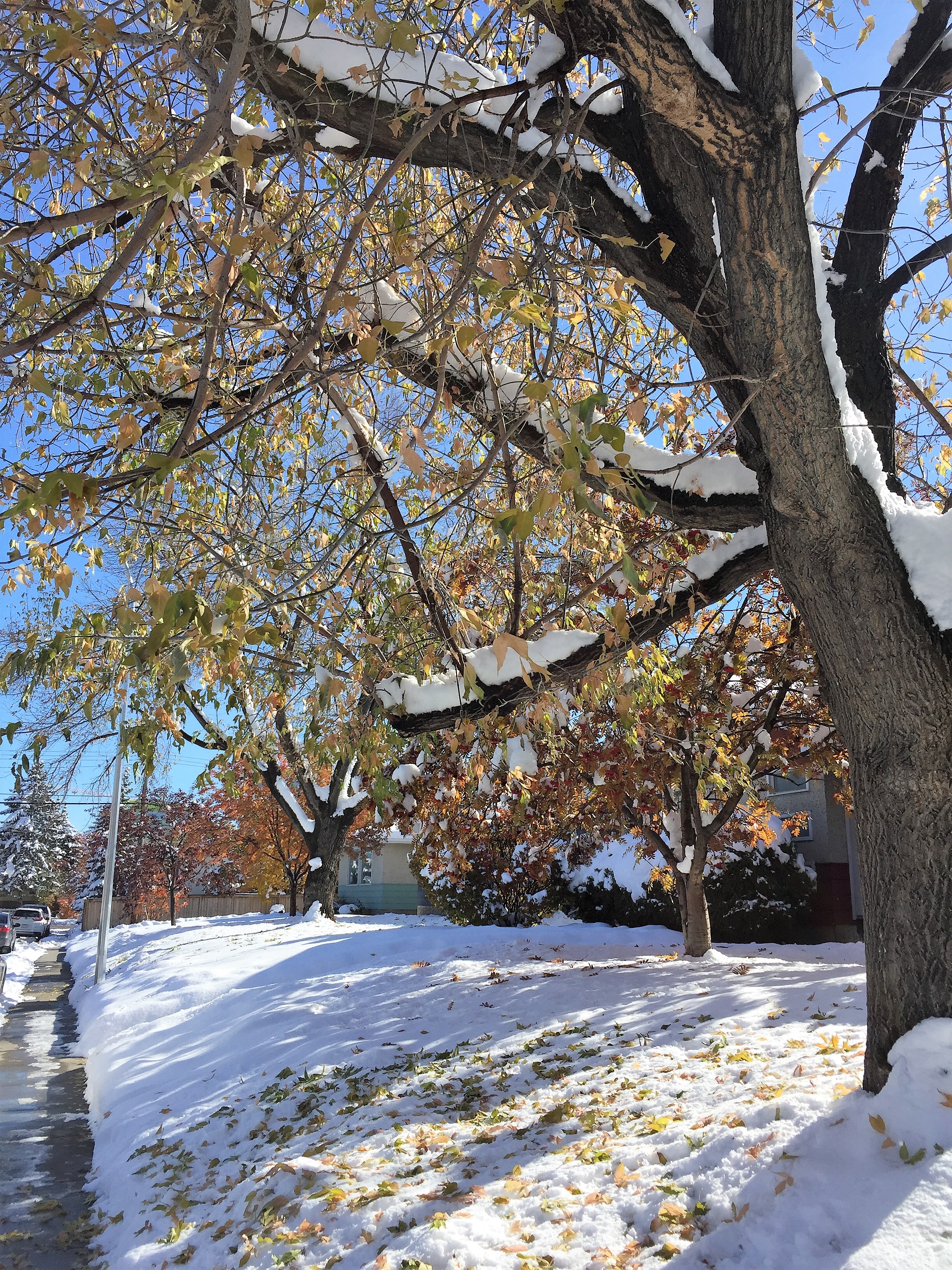 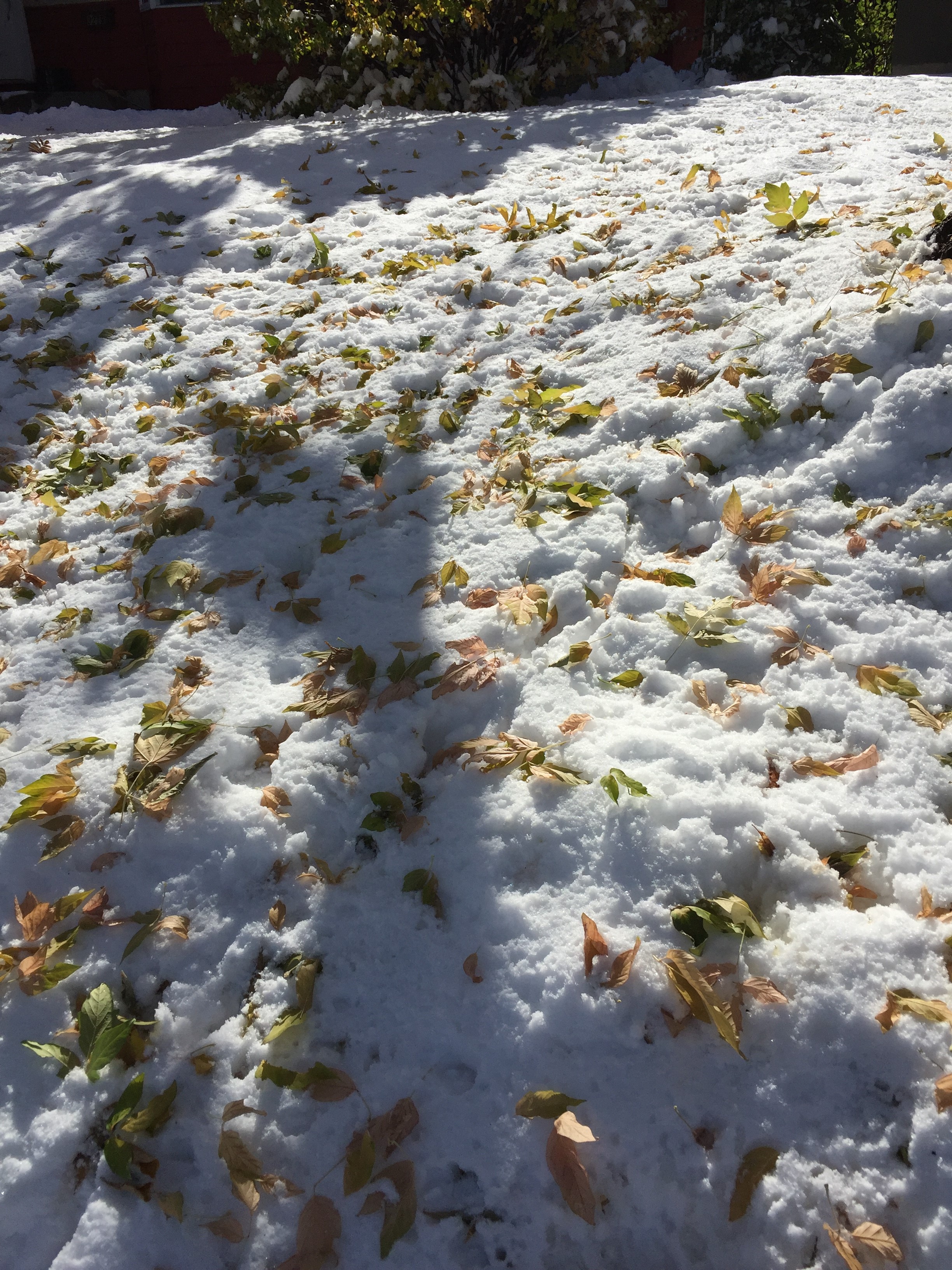 Boy, those leaves are going to be a bitch to rake up. Moving on! Positive thoughts!

I know all of you people are all about the Honeycrisp, but for me, there is only one kind of apple, and that is the McIntosh. Have I mentioned this already? Yes, I have. Many times. But Macs are so good, they are the perfect texture and the perfect tartness and the perfect taste. My older son was begging, literally BEGGING me to make an apple pie, and although I consider it to be an abomination, and a grievous waste of the perfect fruit, I bought a few extra apples specifically to make pie. 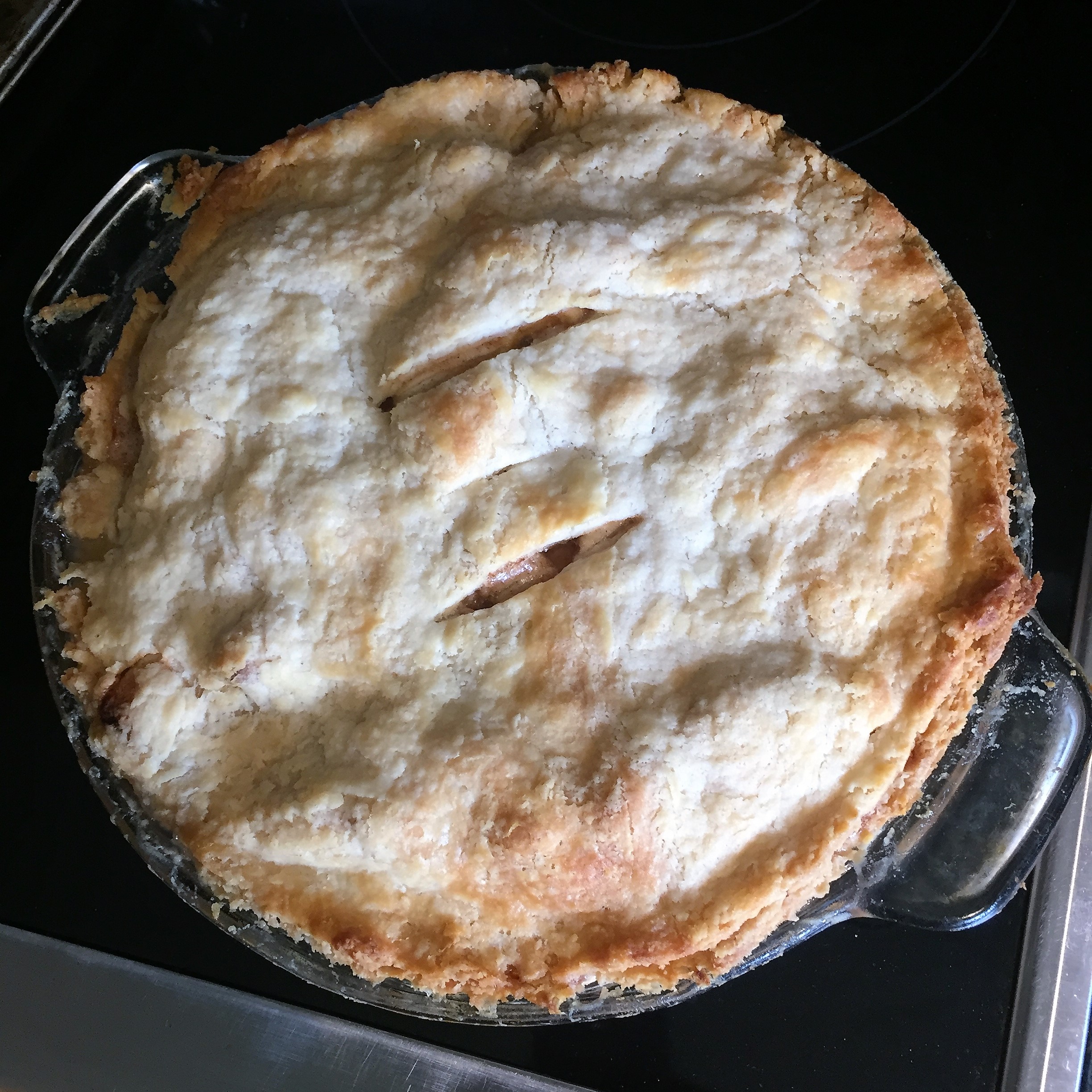 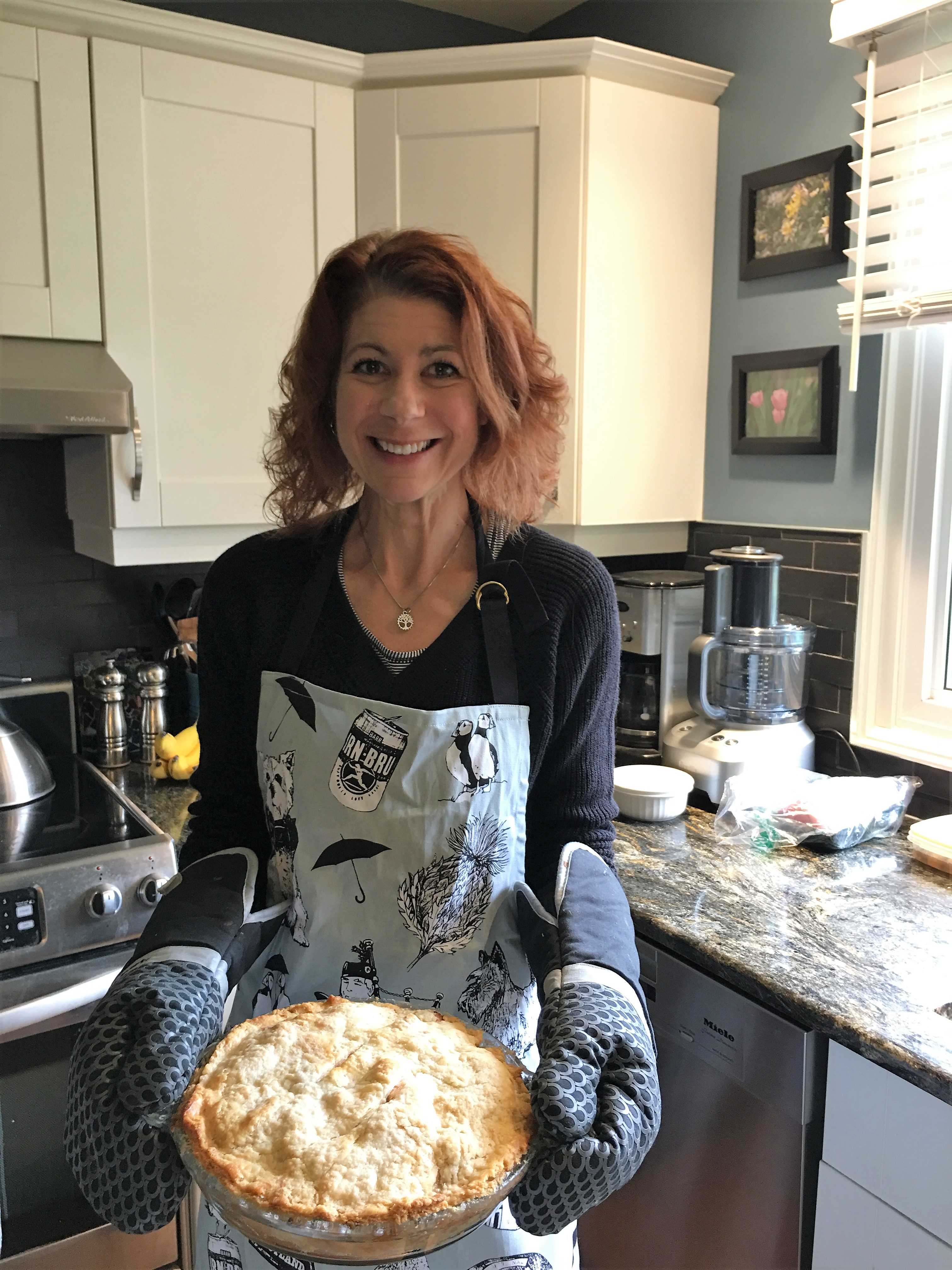 I am not gifted in the “making baked goods look pretty” department, so this is as good as it gets, in terms of pie crust. I read the shortening box, and one suggestion was to roll out the crust between two pieces of waxed paper and WHY HAVEN’T I BEEN DOING THIS SINCE THE BEGINNING? What a game changer. I highly recommend it; it makes it so much easier to roll and to transfer into the pie plate, and it is so much less messy than cleaning up flour that gets scattered everywhere since the dough keeps sticking to everything.

By the way, do you like my apron? My parents brought it back for me from their recent trip to Scotland. My youngest niece calls aprons “cooker capes” and forever that is how I will think of them.

As much as I love apples, I love pears a teensy bit more. Their season is so short that our whole family ends up bingeing on pears for the few weeks that they are really good. I have been buying them in six-pound bags; the first one contained pears of all the same greenness, so they all ripened at exactly the same time. We were a family of pear bingers for a few days; the next bag I bought had a few that were almost-ripe, so things have smoothed out around here, pear-eating-wise. 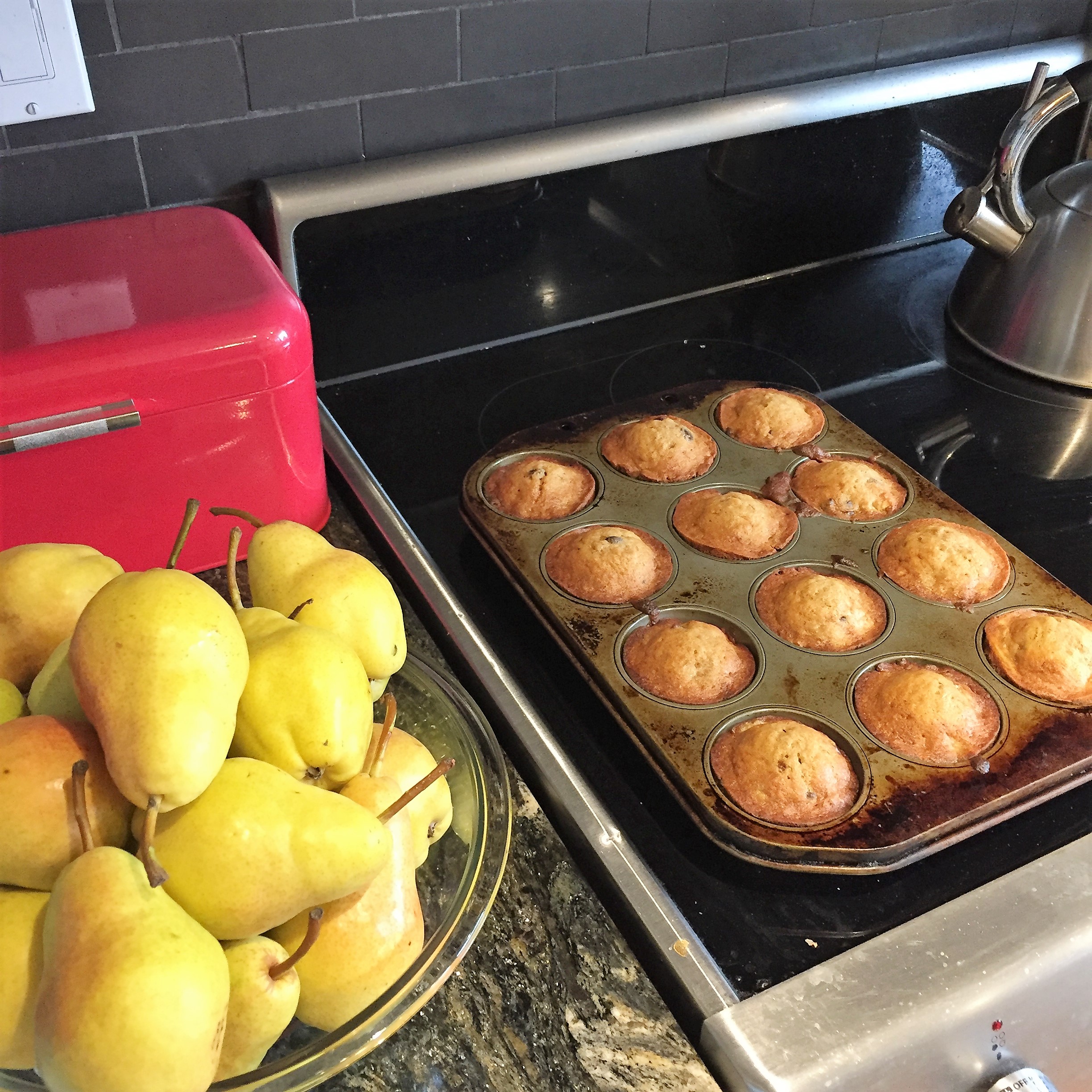 After my one-year shopping challenge finished, I wasn’t actually going to buy much of anything; I really do have a lot of clothes. But I saw this tank and I could not resist: 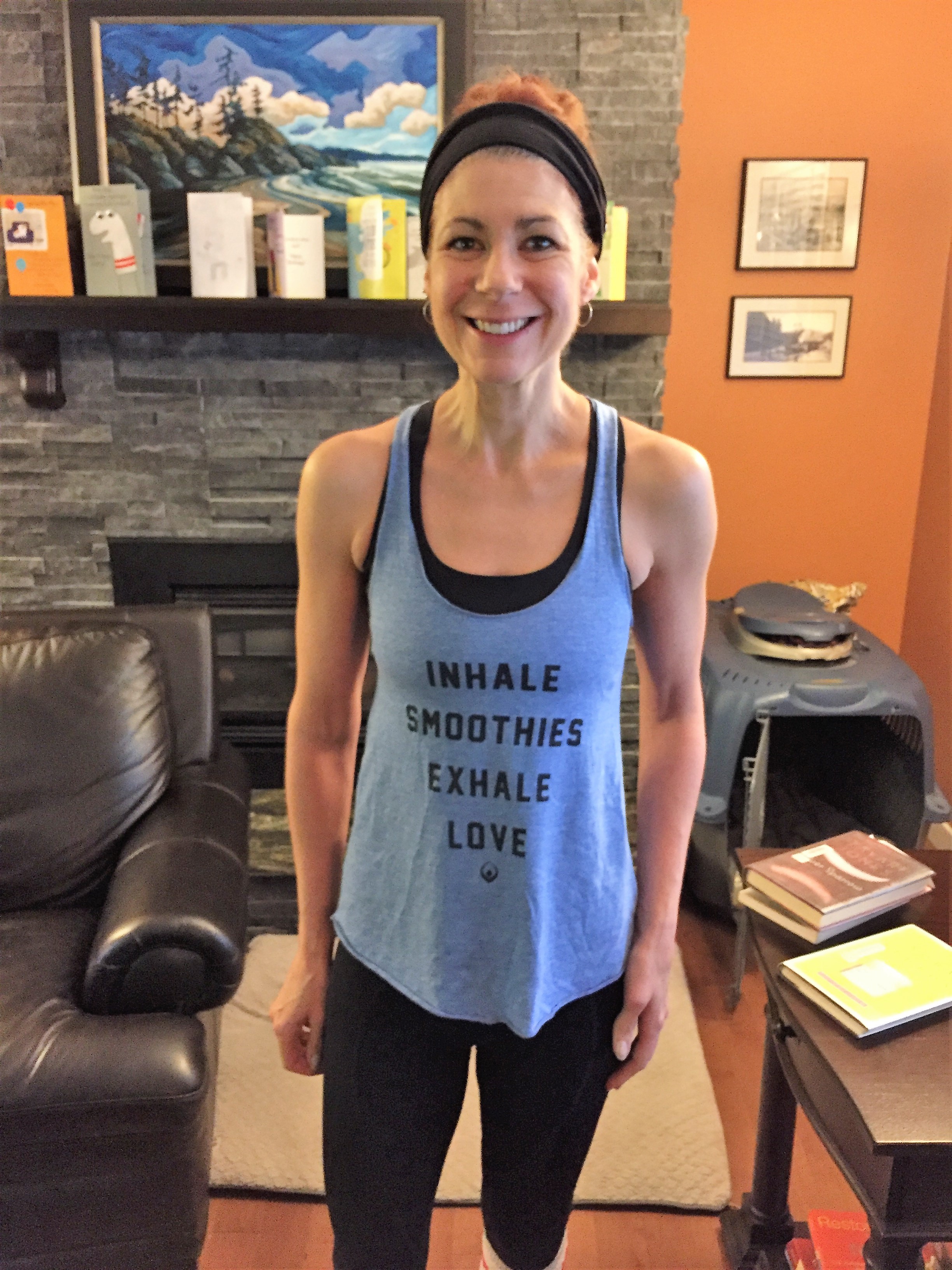 It’s like it was made for me! I do both of those things! I had to have it and it makes me happy every time I wear it.

One of the nice things – I guess? – about living on Planet Hoth is that I have a number of gorgeous, warm sweaters. This one I bought right after my shopping challenge ended – it was on clearance for TWELVE DOLLARS, PEOPLE. I love the way it looks! But it is NOT the most practical item, as the sleeves droop into everything while cooking or washing dishes or doing any of those household tasks that seem to take up a large percentage of my life. 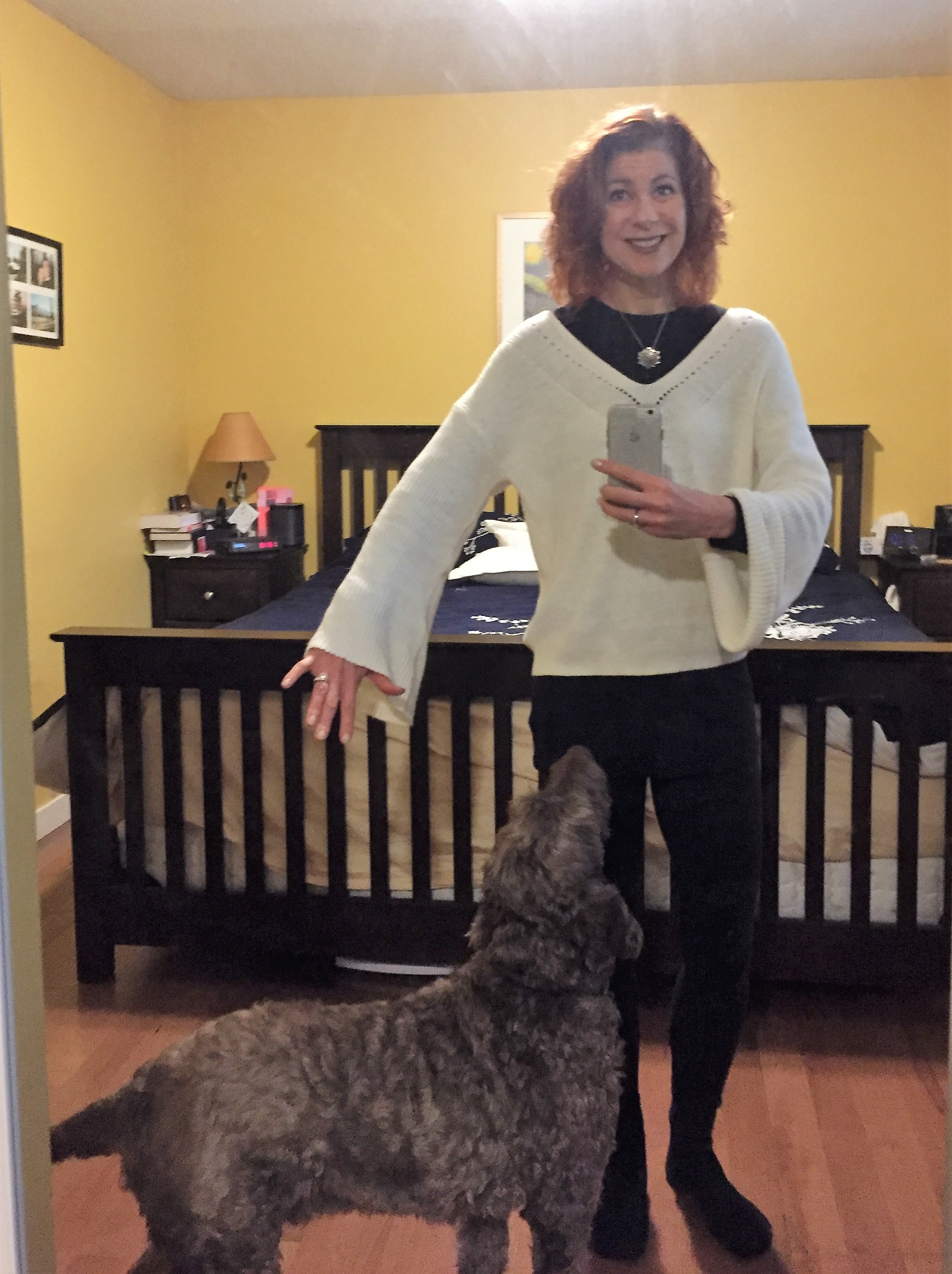 Barkley is wondering what is UP with those sleeves.

Happy Thanksgiving, my friends. I hope you have many things to be thankful for this weekend. xo