Search
Menu
Categories
‹ prev next ›
5
Reach out and touch someone
September 28, 2018 Nicole Boyhouse I love my friends

This is a thing that actually happened at Superstore this week: behind me, unloading her groceries, was a mom with a small boy, around aged two, eating one of those free cookies the bakery gives any child under 12. Behind HER was an older lady, who started talking to the little boy, seated in the cart. She was talking the way you do to a two-year-old – Is that a good cookie? Are you a good helper? Are you getting groceries with Mommy? – and then suddenly, loudly and stridently, said to the mom, “You really should teach him that he shouldn’t talk to strangers! I’m serious! I just read something about a little boy being abducted and KILLED after talking to strangers!”

I whipped my head around from where I was piling my groceries into my bins. I was smiling to myself when I heard the little boy babbling, and this woman’s complete change of tone was startling, to say the least. The mom made slow and direct eye contact with me, raised her eyebrows and smiled, and then turned to the older lady. “Thank YOU for your concern,” she said in a very polite and kind voice. The woman kept talking, saying she was serious, this was a serious situation, and the mom just kept nodding and smiling. “Okay, THANK you. That’s kind of you to be concerned.” She said it in a way that was completely unoffensive and simultaneously showed that she would not give this weird busybody a single thought.

I don’t think I’ve ever been so impressed in my entire life. Also? What the actual, lady? First of all, why are you luring a two-year-old into a conversation with you, only to chastise the mother for allowing such a conversation to happen? Secondly? While of COURSE I taught my own children to be cognizant about their surroundings and not randomly begin conversations with strangers on the street, I do think there is something to be said about polite chitchat in the grocery store. I would like to think that if an older person began conversing with my children in the security of their local grocery store, that my children would be so kind and polite as to carry on with the conversation. Everywhere you go these days, people are on their phones, desperately avoiding any and all human contact, and this has made the world a worse place. Whatever happened to making small talk while waiting in line? We have enough temptations in our phones to avoid society as a whole, we don’t need weirdness about Not Talking To Strangers when that stranger is simply making a comment about the weather or the photo of the Duchess of Cambridge on the cover of Hello! magazine.

The world is so small now – we can connect with people half a world away with just a click – but it’s also so big. Reaching out and just making contact can really make a difference, plus, it can be fascinating. People are so interesting, aren’t they? Everyone has a story. I remember years ago, a friend posted a photo of a lovely little apartment in Italy, with flowers on the balcony, and she said, I wonder who lives here and what their life is like. I think that all the time, but with food. I wonder what that person is going to do with all those pears and Swiss chard, I might think as I gaze at the groceries on the conveyor belt in front of me, or Oooh, that looks like a birthday party to me!, or What makes Gourmet Gummy Bears gourmet? I always look at other people’s groceries, not in a judgmental way, no, but out of genuine interest. The other day I was at Costco with my usual cart full of groceries, and the older gentleman in front of me had a total of four things, which is always interesting to me when that happens. A person has to be, in my opinion, in possession of some incredible inner strength to go to Costco and leave with four things. How do they do it? I feel virtuous and strong if I leave without spending $400, let alone only putting four things in my cart and then LEAVING. But this particular gentleman made me smile because all I could think of was this guy is going to have a good time this weekend. In his cart was the following: a vacuum-pack of baby back ribs, a ten-pound bag of onions, a Costco-sized pumpkin pie, and a two-pack of the kind of whipped cream that comes in a spray can. PARTY.

Of course, sometimes the contents of people’s carts make me wonder. The other day, a young couple with a baby were behind me, and the cart – the entire, giant cart – was filled with that kind of baby food that comes in a squeeze packet. There was nothing else at all in the cart, just dozens and dozens of squeeze tubes, in all different flavours. It seemed like every squeeze tube of baby food was actually in that cart. For once in my life I didn’t instigate a conversation, because I didn’t want to sound in any way weird or judgmental (that’s a LOT of baby food you have for that one baby!). My natural nosiness was satisfied though, as I heard the lady say to the cashier that they were going to China for five months, and this kind of baby food was either unobtainable or expensive. I imagined a suitcase full of baby food on its way to China and smiled. 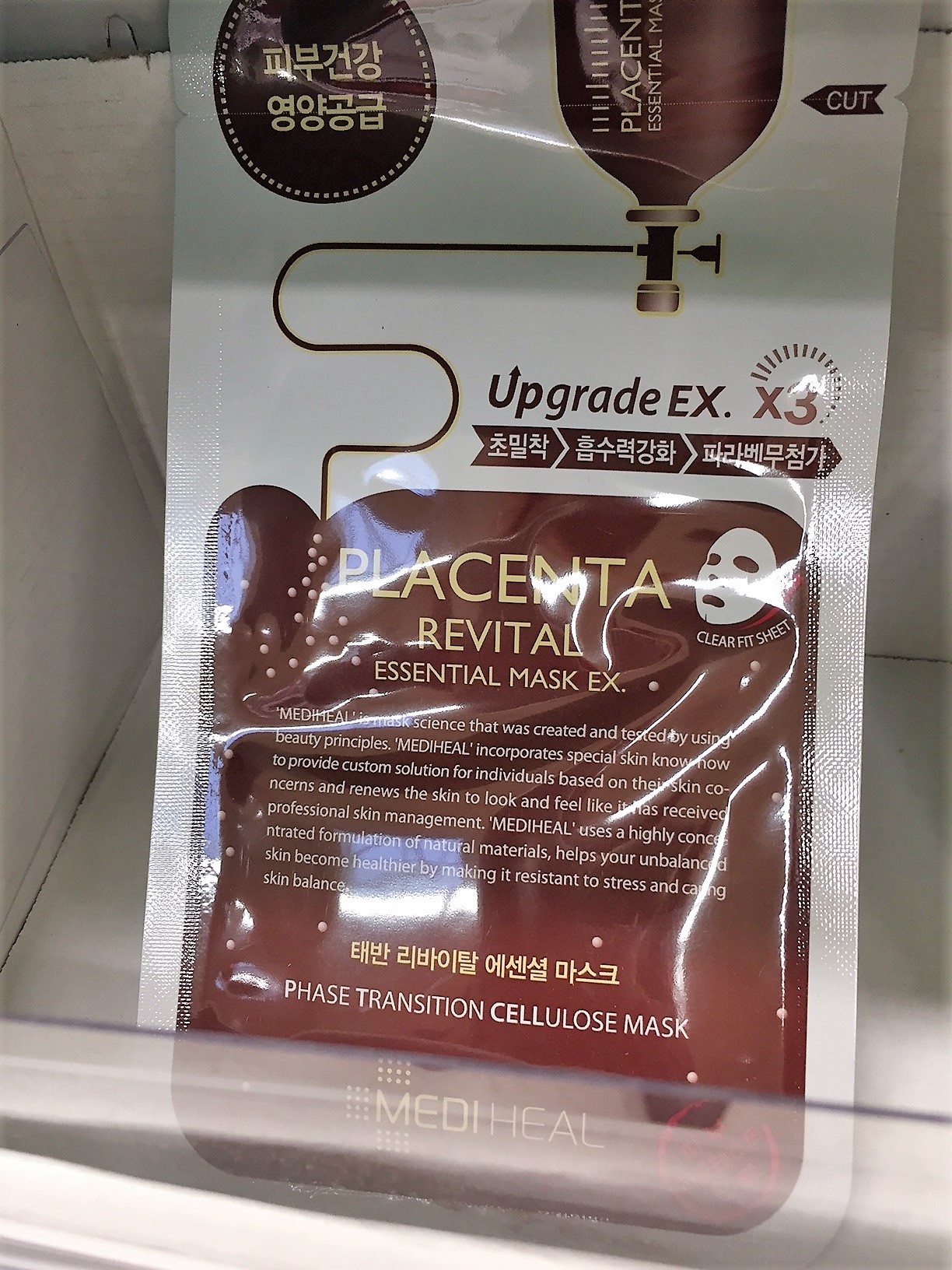 I was looking for travel-sized shampoo when I saw this on display. I admit I stopped and stared at it for a good couple of minutes, completely blocking the aisle until a lady asked if she could get by. I apologized and explained that I was looking at this, to which she said, in an excited kind of voice, “Are you going to try it?” No. I’m not. I don’t want placenta on my face, no matter how revitalizing. She went on her way but I like to think that she circled back to pick one up. It could have happened!

Have a beautiful weekend, my friends, enjoy the end of September! xo