In case you were waiting on the edge of your seat, yes, I did survive the seven-hour-ten-teen-boys birthday party on Saturday. More than that, it was probably the lowest-maintenance and most-enjoyable birthday party ever given in my house. Literally all I did was provide food; the boys entertained themselves very easily. What they did I do not know exactly; there was some trampolining, there was some extremely loud noise-making, there was a LOT of eating. At one point it was so quiet I was a bit concerned, but when I peeked downstairs they were all busily playing a card game, which was very unexpected. The sole downside was that all the adults who came to pick up, and I myself, were kept up way past our bedtimes, and we all looked like zombies at 11 pm.

However, a great time was had by all and the cake I had made turned out really nicely: 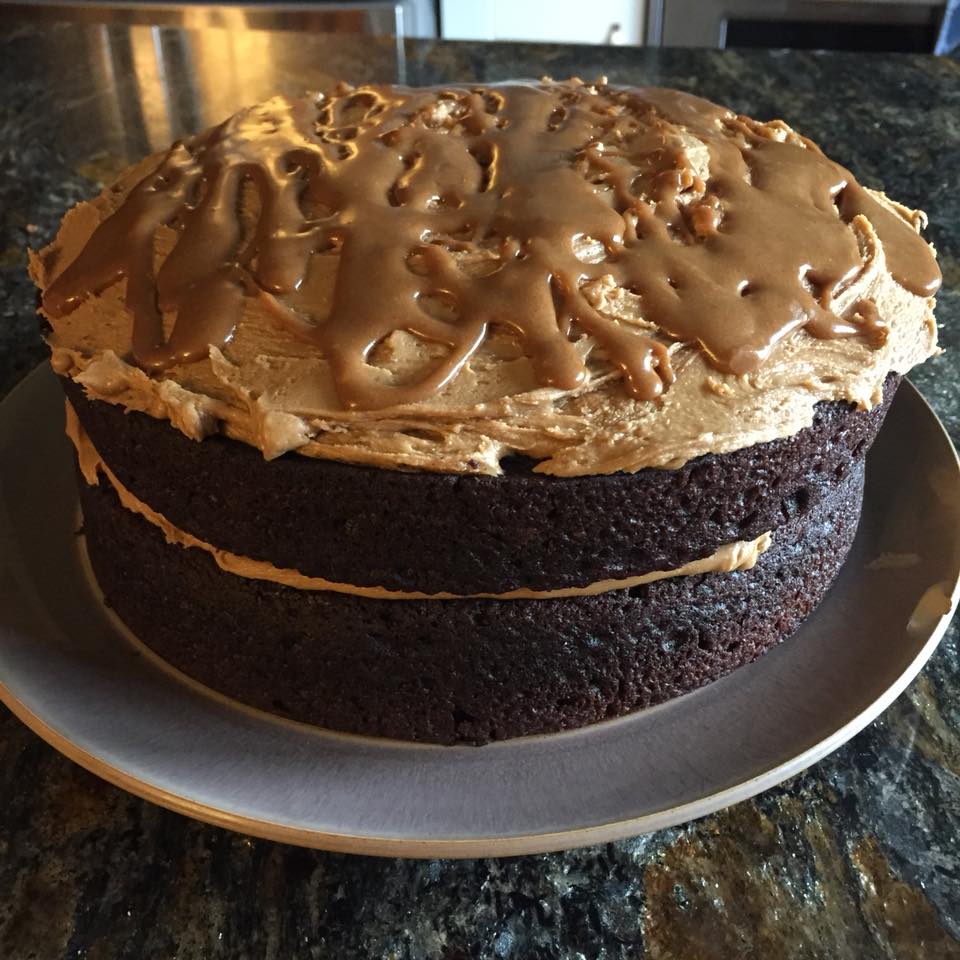 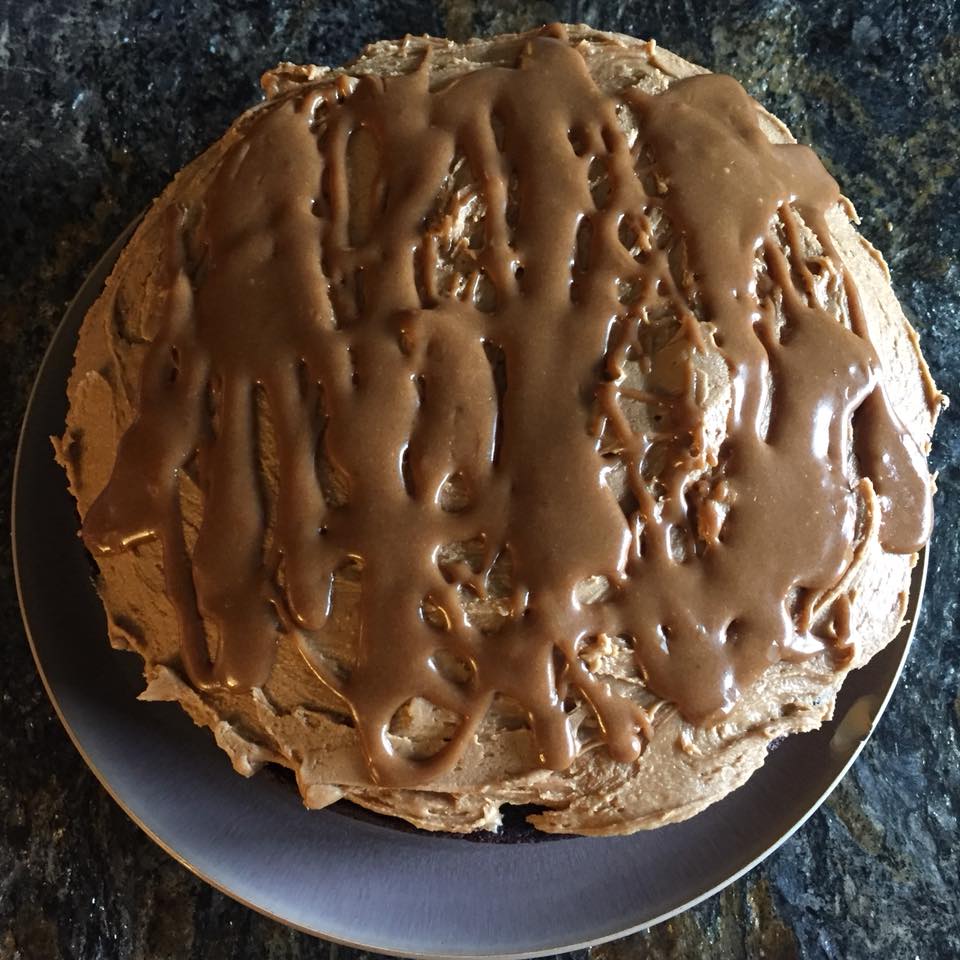 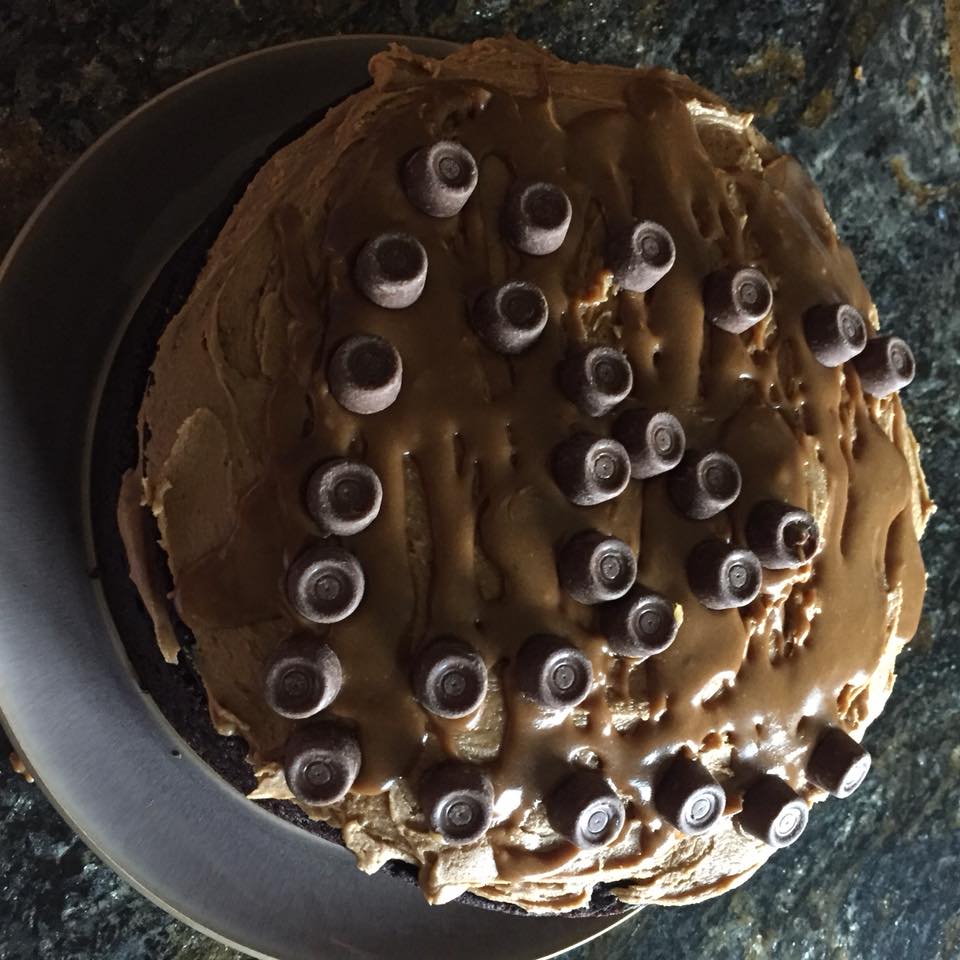 The birthday boy decorated it with Rolos just in case there wasn’t enough sugar in the caramel frosting and drizzle.

I recently purchased new, somewhat pricey, 9 inch round cake pans to replace the lowest-cost-possible-off-brand 8 inch ones I bought about twenty years ago. The latter are shallow little things that would result in very strange looking layer cakes. Twenty years of strange-looking layer cakes, people, and let me tell you, these new pans are amazing! I am reminded yet again that one gets what one pays for, particularly when it comes to kitchenware. Saturday morning I took the pans out of the oven and marvelled at the absolutely perfect layers. I forced everyone to come into the kitchen and admire them. Why didn’t I buy these pans before? I asked rhetorically, to which all three guys answered in unison, Because you’re cheap!

Well. Cheap is a harsh word; I’ve always been loathe to replace something that is Working Perfectly Well, even though Working Perfectly Well does not equal Working Optimally, as we all know. May I remind you of the life-changing effects of finally, after many, many years, obtaining a really good garlic press, vegetable peeler, and spatula? After Kondo-ing the house and my life I have been especially cognizant about bringing excess Stuff into the house. We don’t need more STUFF! I will say sternly to anyone who will listen. I think of this as virtuous but as you can see, it can also be construed as a character flaw that can only end in sub-optimal food preparation and results.

The econometrician in me desperately wants to do a cost-benefit analysis of this phenomenon, including the economic term “utility.”

This week has been busy with yoga teaching and grocery shopping, my dual loves. I am not even saying that ironically, I love yoga teaching and, in a very different way, I love grocery shopping. Mostly. I was at Costco and was shocked, absolutely shocked, at the state of the parking lot. I know what you’re thinking! Nicole, we have really heard enough about errant Costco carts and how people who don’t return them are the Worst People In The World. Well, surprise! I wasn’t going to talk about carts, although yes, those people are the Worst People In The World and I fervently wish Bad Costco Karma on them all; Bad Costco Karma consisting mostly of Long Lineups, Blocked Aisles, and The Discontinuation Of That One Product You Came To Costco For.

Moving on, it wasn’t the cart situation that shocked me yesterday; for one thing, I’m becoming deadened to it, for another, there were many errant carts but the situation wasn’t as bad as it often is. No, what was shocking was the multiple lineups of cars trying to access the gas station. Apparently the gas station is going through some refurbishment, although I am unclear as to what this entails. Perhaps there are fewer pumps available? I don’t know, all I know is that there were bumper-to-bumper lineups in all possible directions, all ending at the gas station. I am not exaggerating when I say there must have been fifty cars lined up to get gas. It looked like a photograph from the gasoline shortages of the 1970s, but with fewer Oldsmobiles.

Why would anyone spend thirty minutes of pure aggravation, idling their cars and eating up the very energy that one seeks at a gas station? Well, according to a lady I chatted with in the parking lot, the price of gasoline was a solid ten cents lower than anywhere else in the city. Ten cents is a pretty good savings, but when we do the math, it works out to – on average, assuming that everyone’s tank is about the same as mine – a $5 or $6 difference. Now, I am a frugal person, although you might not be able to tell from my extensive Lululemon wardrobe. I regularly price compare and calculate per-unit costs of household goods, I shop at different stores for different deals and I am absolutely obsessed with collecting and redeeming PC Optimum points. I KEEP SUB-OPTIMAL CAKE PANS FOR TWENTY YEARS BECAUSE I DO NOT WANT TO SPEND $20 TO REPLACE THEM. I tell you this: there is no way that I would undergo such an endeavour to save $5 or $6. Hey, I’m not judging! Maybe it’s worthwhile to the fifty cars idling away, blocking the parking lot exits. But, as I nosily peered at the people in the cars, they all looked as agitated and irritated as one might imagine.

Speaking of cars, I was driving to the yoga studio behind a car with a vanity license plate. The plate read “NIX TOY” which I took to mean, Nick’s Toy. Now, when you think of a car that would be construed as a Toy, what do you imagine? I think of a hot-looking sporty convertible or perhaps a refurbished muscle car. Something shiny and fast, in a sexy colour like red. What I don’t generally picture is a white four-door Buick sedan, which this car was.

Well, I will withhold judgement on that one. Maybe the owner went from a minivan like mine to a sedan, which might seem Toy-Like in comparison. Who is to say, really. At the moment I feel like my new cake pans have effectively changed my life for the better; perhaps a sedan revolutionized Nick’s life too.