I often get pitches in my inbox to feature Tips/ Products That Would Interest My Readers, and I could have the Pleasure of Writing About Them Free Of Charge, and, of course, these are not things that I do. However, on occasion something pops in my mailbox that I find myself enjoying so much that I HAVE to share.

In the weeks leading up to Valentine’s Day, I received a few pitches to write about romantic things like dealing with late-winter plumbing issues or the differences between water softeners and water filters, and are these people actually spying on me? Am I on camera right now?

But the email that really stood out was the one with the subject title “Eating Pizza In Bed Is Top Relationship Deal-Breaker!” I stared at that subject title for some time; I didn’t want to click on the email because I desperately wanted that to be true. The TOP relationship deal-breaker. Not incompatibility, not infidelity, not differences in managing personal finances. EATING PIZZA IN BED.

Sadly, I did click on the link and further, this was a relationship deal-breaker in terms of pizza eating, not the intricacies of human partnerships, and although it’s been some time since I was in the dating world, I can’t remember having any issues with how people eat pizza and how pizza consumption would affect my feelings towards them. Unless, I guess, that person shoved an entire piece in their mouth and proceeded to have a conversation while chewing, but that applies to any kind of food, not just pizza.

The other deal-breakers were listed as picking the cheese off the pizza, not eating the crust, asking for anchovies and/ or pineapple on the pizza, and eating pizza with a knife and fork. I plead guilty to the last one, because I am one step away from becoming Mr. Pitt, but we order pizza about once every two years, so it’s a pretty moot point. We have homemade make-your-own-pita-pizzas weekly, though, and I always use utensils; my husband still likes me so I think I’m okay.

But really, who eats pizza in bed? Who eats anything in bed? This might be my own personal thing but I like my bed free of food particles. Those duvet covers are a pain to wash and I don’t want to be dabbing remnants of pizza or anything else off of my pillows. I swear, even if I was a married lady on Downton Abbey, I would prefer to come down for breakfast rather than be served a tray, although if that was the case, someone else would be dealing with toast crumbs or Kashi cereal in the blankets. Still, it’s the principle of the thing.

I would kick ANYONE out of bed for eating crackers, make no mistake.

Years ago I read one of those click-bait articles that was titled something along the lines of “The One Thing Successful People Do Every Day” and that one thing was making their bed. I am a huge proponent of this and my kids have been making their own beds for many years, which apparently bodes well for their future successes. I literally don’t understand why people don’t make their beds – no judgments here, I just don’t understand. It takes less than two minutes, it looks neat and tidy, and at the end of the day, I want to get into a nice neat bed, not a jumble of sheets and blankets.

To me, THAT would be a deal-breaker, since I don’t think a non-bed-maker and a bed-maker could really live together in harmony. Although, now that I’m thinking about it, maybe they could make it work, not unlike a gardener-and-flower relationship. I mean, my husband deals with the fact that I cannot handle the TV turned up past a certain quiet volume, and I deal with him folding the tea towels in halves instead of in thirds, so who knows? We all have our relationship crosses to bear, I guess.

Well, this post certainly went a different direction than I had intended. I had intended to write about Valentine’s Day, and how some people place a lot of importance on it and others scorn it, and what happens when the twain meet? My friend and I were talking yesterday of Valentine’s Days Past; she worked in a grocery store and remembers hordes of men rushing in at 5:30 pm on The Day to buy crappy grocery flowers. I remembered one year visiting my parents in Palm Desert and my mom and I went shopping. I wanted to buy some bras at Victoria’s Secret – this was before the chain came to Canada – and the store was flooded with men, with crazed, desperate looks in their eyes. I didn’t make the connection until I realized it was February 14, and noticed the salesgirls had their hands full choosing probably inappropriate items and ringing up gift cards.

For me, Valentine’s Day is a nice excuse to make heart shaped baked goods – this year, a raspberry cake and sugar cookies – and to relentlessly tell my husband I choo-choo-choose him.

This year, though, he ordered me three cases of red wine, which is probably the greatest gift ever given in the history of mankind. Unless, I guess, it was four cases, but that seems excessive. I sent him texts with the bee emoticon so I am just going to say that I got the better end of the deal.

Happy belated Valentine’s Day, my friends. May your wine be rich and plentiful, and your pizza be delicious and eaten with a knife and fork at a table, just like god intended. 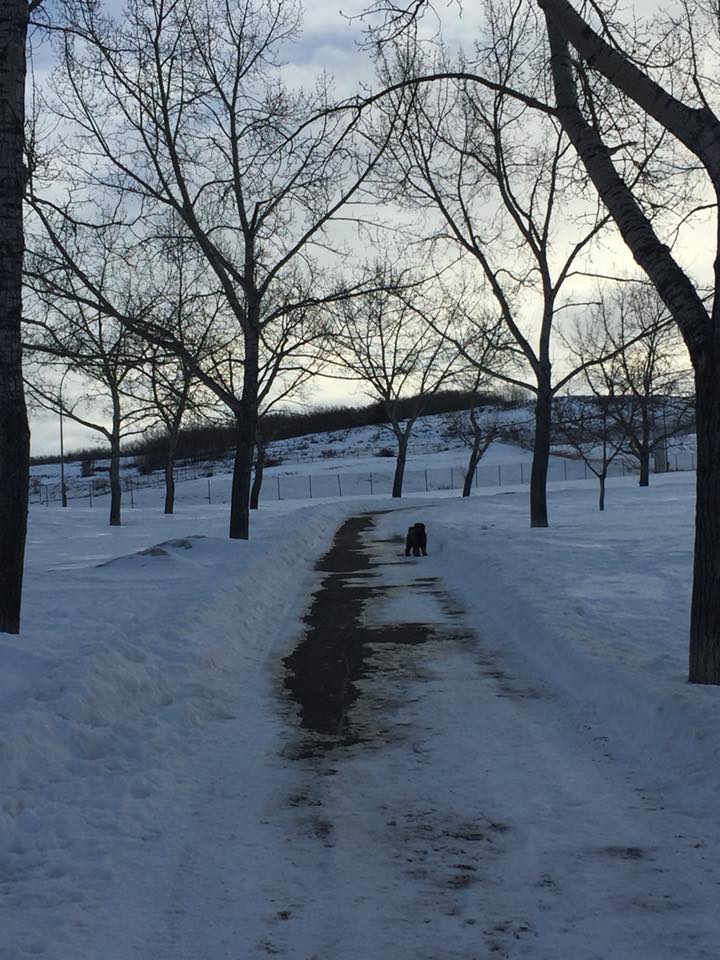 Bonus Barkley-on-a-snowy-day picture, just because I love you. In the spirit of Valentine’s Day (a day late!).