Hoo boy, has it been a long week or what? I know it’s technically a short week, but it feels…trying. Trying and LONG. Last Thursday night my son got home from Quebec, and early Friday morning we got in the car for an eight-hour drive to visit my mother-in-law for the Thanksgiving weekend. In order to do this, between getting home from the airport and getting in the car, the following had to be done: a) laundry, b) pack all of said son’s clothes and personal effects, and c) pack up the car. I’m just going to say that I am very happy to be home, but exhausted by the laundry. I always feel a little strange complaining about laundry – it’s not like I am personally scrubbing lye soap into clothing on a scrub board, or using a wringer washer, or even hanging things (other than Lululemon) to dry, but my god, the laundry. I think it’s because, to paraphrase Newman from Seinfeld, the laundry never stops. Even when you are caught up, you are immediately behind again because people change their underwear, there are towels to be washed, and sheets to be changed. No matter what, I will be folding clothes until I drop dead. Hopefully one is not correlated with the other.

Anyway, laundry aside, it’s nice to be home and eating normally and being back into normal routine. It was an unsettled eleven days, what with the Quebec trip and then the road trip, but we are home, home, home. Home with a great deal of grapes and apples, so all is well.

As a side note, it’s hilarious to me how people always say, when I mention I have thirty pounds of apples in my cold room, that I’ll be able to make so much pie and apple sauce! I tend to look at them blankly, because to me, that is a WASTE of an apple. If you don’t think I can single-handedly consume thirty pounds of apples before they go off, then you are vastly underestimating my abilities. Maybe it’s the Alberta Girl in me, but it never, ever occurs to me to use fresh fruit to make pies or jam – I buy frozen fruit in bulk from Costco, and I use that. Fresh fruit is for EATING, in my humble opinion. Also, I find apple sauce to be a bit…unappealing. No offense to all you apple sauce lovers out there, but I cannot think of why I would need more than the occasional jar from Co-Op to make hippie-style-fruit-sweetened muffins.

Perhaps I would feel differently if I lived in a place in which the fruit crops were more than crabapples and saskatoon berries.

The one exception is my stash of Concord grapes, because my generous mother-in-law gives me so many that it is actually not physically possible to eat them all before they turn. In that case, I make fruit leather. Here’s my un-recipe: make thick, pulpy grape juice using a juicer. Peel, core, and slice apples (I often save my tree ripened ones for eating, and buy bulk bags at Costco to use for this. I know! I’m terrible at sharing apples). Put both in a food processor until they reach a smooth applesauce-like-consistency, then pour onto parchment paper-lined sheets in the dehydrator for 10-12 hours, depending how thick you pour it. As for quantities? I don’t know. What am I, a food blogger? Oh, right. Anyway, I don’t really measure here, I eyeball it. Fill your food processor with apple slices, add grape juice until it’s purple and smooth but not runny, and run with it.

So other than doing laundry I spent quite a bit of time in the kitchen this week, and speaking of kitchens…

I know, I wrote about renovating back in August, planning to write the kitchen installment “next time” and if I put it off any longer, it will be Nicole’s Kitchen Renovation Six Years Later. I’m sure you were on the edge of your seat! Does Nicole still enjoy the kitchen renovation of 2012? Does she have regrets? What would she do differently? I’m sure you have been dying to know, so here goes.

When we bought the house, the kitchen was, for lack of a better word, disgusting. The cabinets were homemade, and the fellow who made them was not an artisan craftsman. The drawers were always stuck, the hood fan was completely coated in grease, the countertops were a pale yellowish green with swirls. The walls, in keeping with the pink-and-green theme of the house, were covered in five different but coordinating patterns of wallpaper. The dishwasher had once been a rolling mobile one, but someone had cut out a part of the cupboards and wedged it in, so it stuck out at an angle, and it also had a wooden cutting board on top which was pretty grim from years of use. The linoleum was an ugly pattern from the early 80s; in short, it was perhaps not the ugliest kitchen in the world, but it was a contender.

When we bought the house we couldn’t afford a big renovation, so we did the best we could. We scraped off the wallpaper and painted the walls a butter yellow, we painted the cabinets a warm white and changed out all the hardware. We did our best and then in 2003 we did our first of two kitchen renovations. Yes, we have renovated the SAME KITCHEN TWICE. We replaced the homemade cupboards with white Shaker-style ones that actually opened and closed on demand. We redid the floor and the countertops, put in an island, a proper dishwasher, and repainted everything. In a bid to save money we did most of the work ourselves and, because we both worked full (and more than full) time, it took four months to finish.

Back in 2012 when we made the decision to renovate, I wanted this NOT to happen. I wanted my renovation, and I wanted it quickly. Fortunately Ron and Don, the brother team, were also of the mindset that the sooner they finished the better, and they set to work. We didn’t change the cupboards because I still liked the white Shaker, but we put in granite countertops, stainless steel appliances, hardwood to match the rest of the house, and the World’s Biggest Sink. 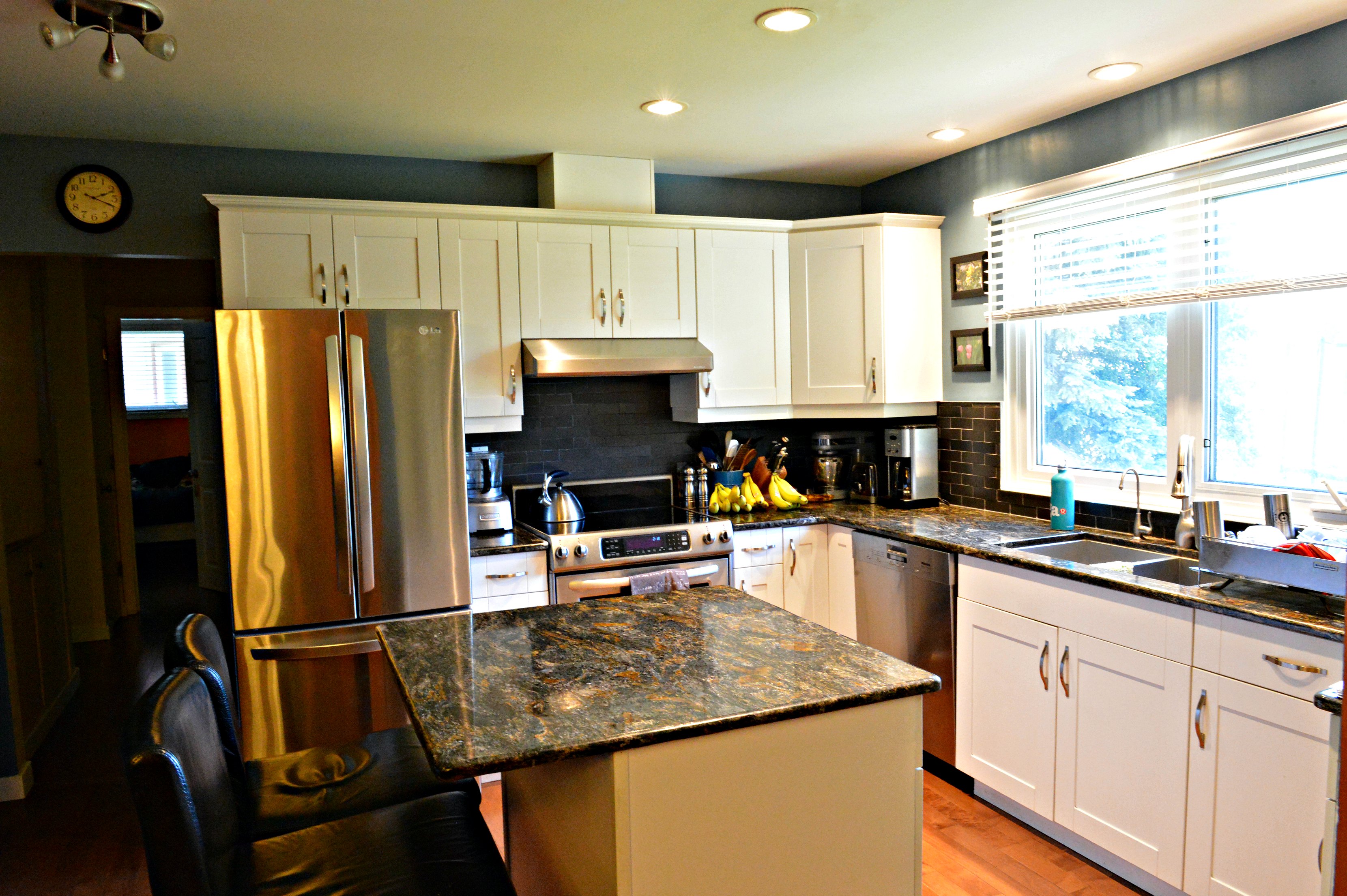 I’m going to tell you right now that I love my kitchen. I also want to point out that it took 16 1/2 years from the time we moved into the house to the time we put a window covering on that window. The original was a cheap brown plastic blind and I planned to replace it when we took it off, back in 2000. And replace it we did, in January of 2017. It improved my life immensely since that is a southwest-facing window, and the sun would blind me in certain seasons when I was trying to make dinner.

One huge regret I have about our kitchen renovation is the range. It’s a Kitchen Aid, and it works just fine, but it has a fan that goes constantly whenever the oven is turned on, and about thirty minutes after it is turned off. It is loud enough to be very intrusive; music has to be turned up, I can’t hear the kids when they talk to me if the oven is going, etc. Also it takes forever to heat up. Huge regret but since it is very functional, I cannot justify buying another.

Another thing – this is not a regret, per se, but more of an observation – while I like the giant square double sink, it is a bitch to clean. The corners tend to get dirty and it is annoying, but on the whole I do like the look of the square sink. Other than the dirty, need-to-be-cleaned-with-a-toothbrush corners.

I’m still happy with the granite we chose, although if we were to do it now I might think about quartz instead. That wasn’t an option back then, and I do like how the granite matches the bathroom (and, foreshadowing, other parts of the house too). 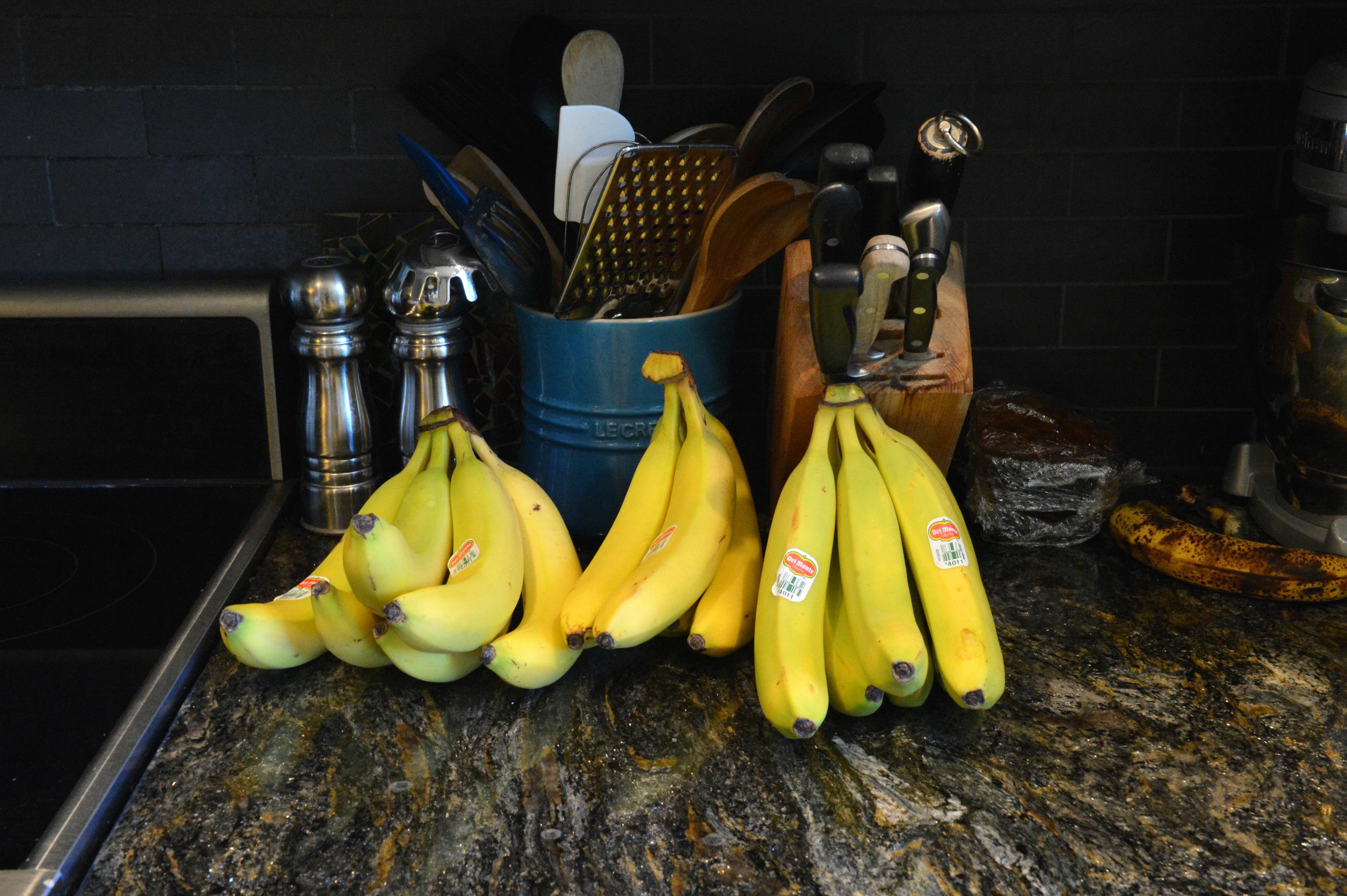 Banana stages: a study. That’s part of a banana loaf in the background. How many bananas do you go through in a week? Our banana usage varies between 14-25 per week, which means there are usually many bananas in various states on my countertop. 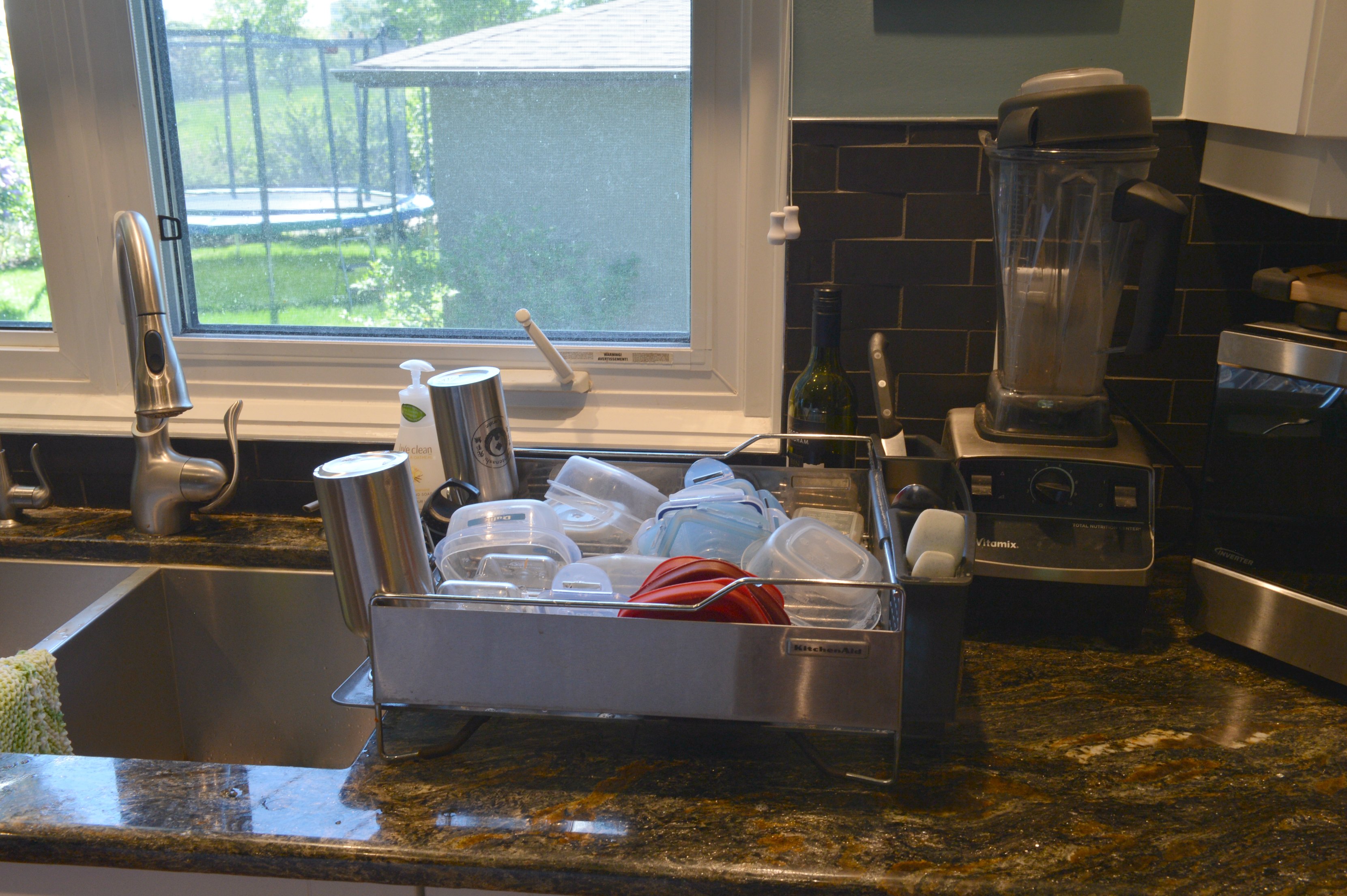 When you were a kid, was there a chore that you detested and you swore you would avoid it like the plague as an adult? For me, that chore is drying dishes. Hence the sturdy dishrack on which are always many containers, that air dry so I do not ever have to. On nights when dinner creation has led to more dishes than the rack can hold, one of the kids dry them. Note the wine bottle in the background, and also my favourite small appliance: the Vitamix. 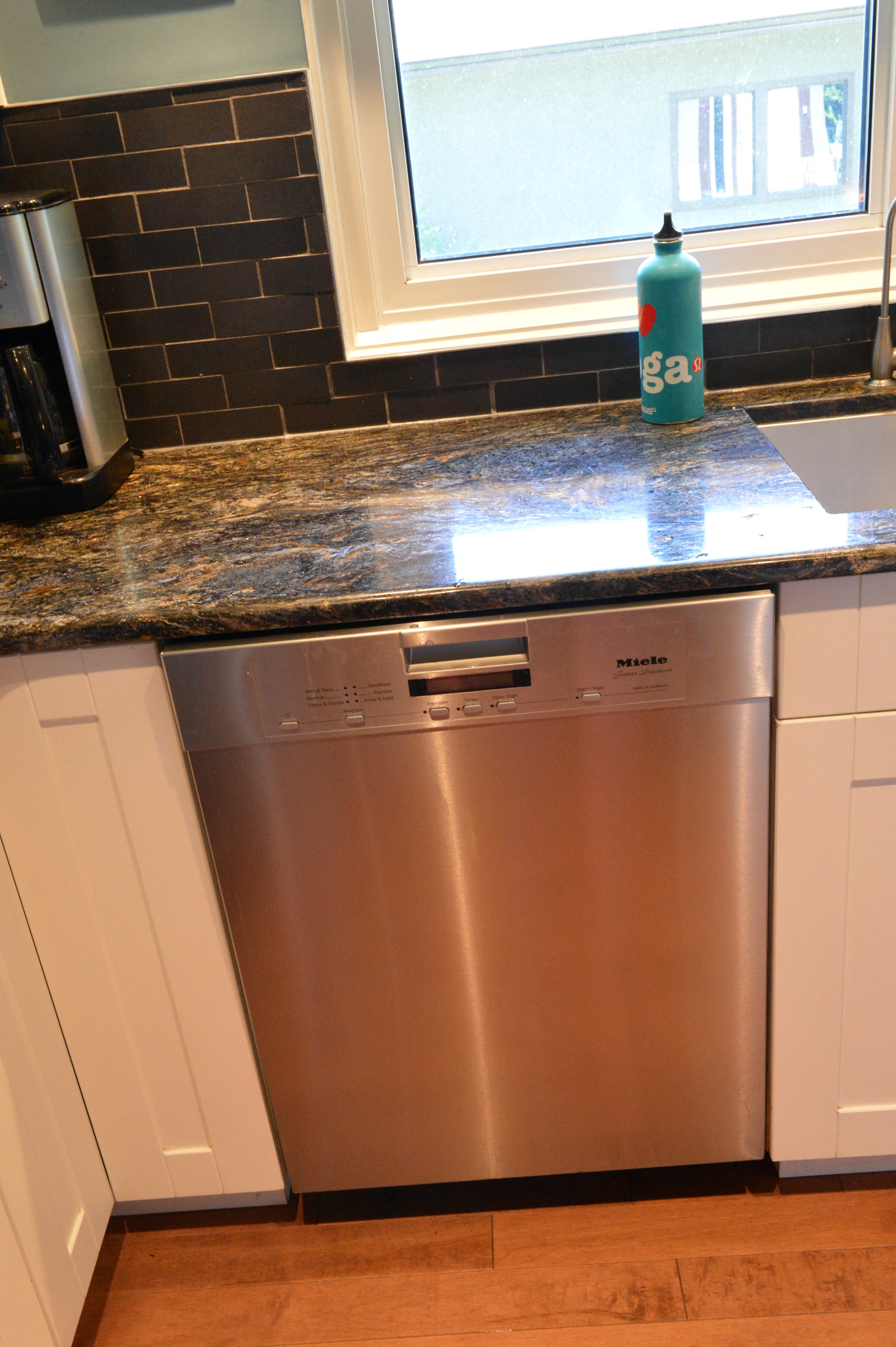 In terms of large appliances, I love my dishwasher. Here’s one major reason why: 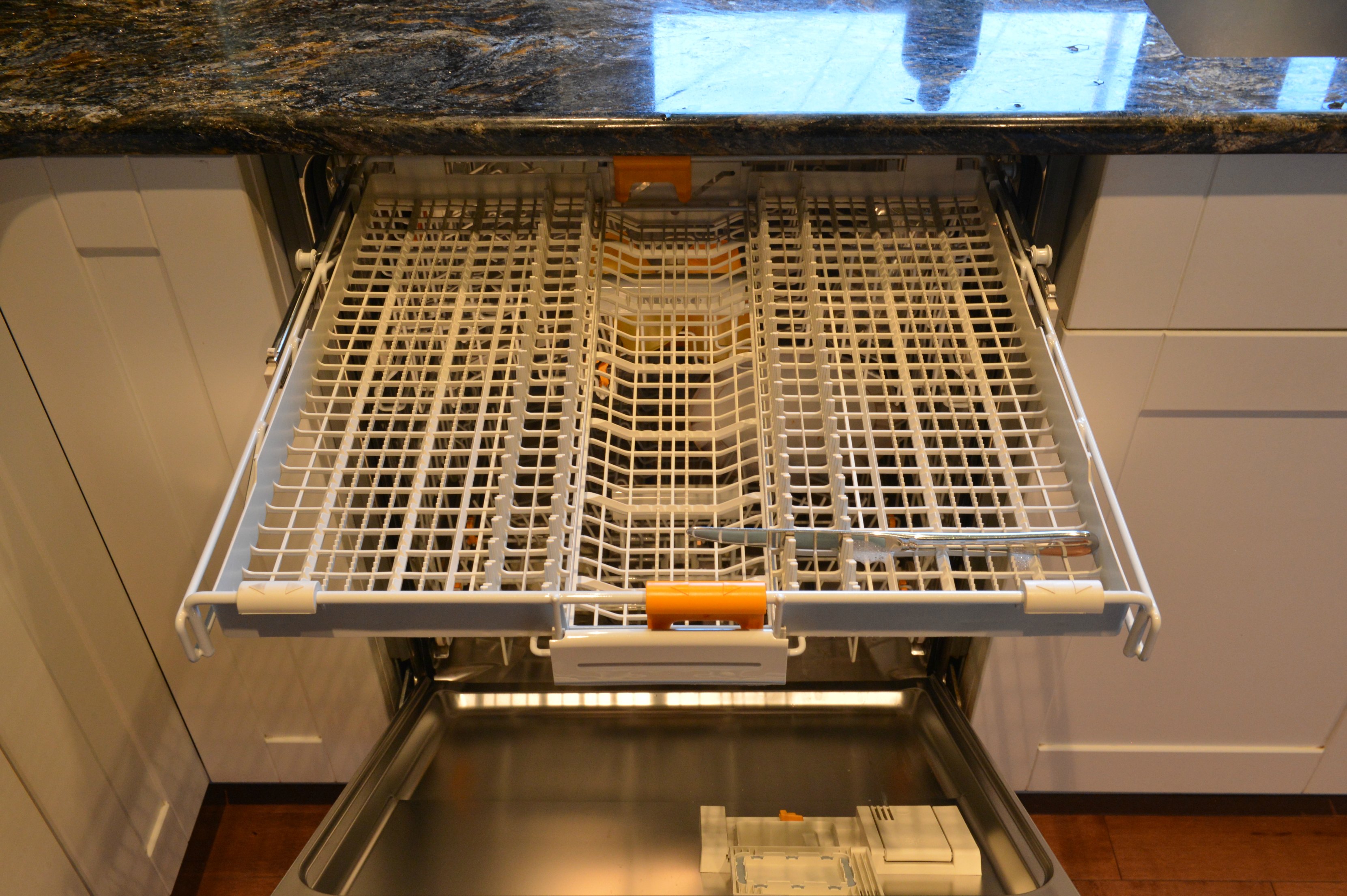 A silverware rack! No more putting all your mucky silverware in gross little cup holders, this baby keeps them separate, clean, and easy to put away without getting your fingers on the parts of the silverware that go into people’s mouths. 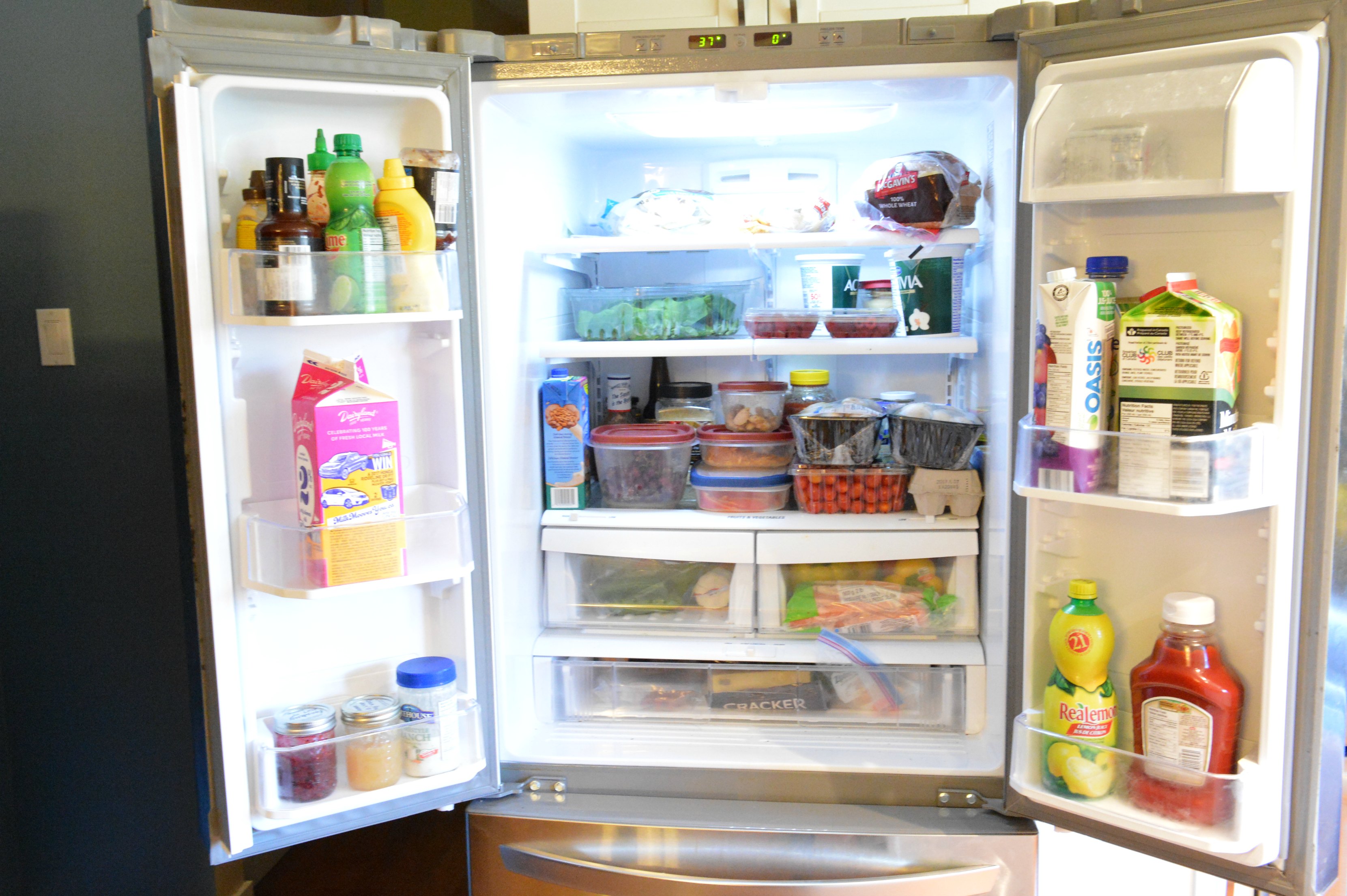 A peek inside my fridge because, frankly, I love seeing the inside of other people’s fridges and pantries. This is not a euphemism! My friend Joanne (HI JOANNE) posted a photo of her pantry that her daughter had recently organized, and I stared at it happily for longer than is probably normal or healthy.

So there you have it – I still love my kitchen reno, save for the noisy range, so I would say that it was a success! What do you think? xo