The leaves are starting to turn on my Mayday tree, and even a few are falling to the lawn. All of you in places with long, unbearably hot summers probably cheer this, but Calgary summers are short and, although this year has been a beautiful, beautiful exception, not hot. In any case I love summer and wish it was longer, but alas. We are where we are, and in any case, time stops for no one. I shouldn’t get the cart before the horse, however, because there are a few weeks left.

The beginning of August marks seventeen years in our house – seventeen years! I ran into a friend of mine who is doing renovations on her house, and I mentioned that we have extensively renovated our 1962 bungalow; in fact, we have done two complete kitchen and two bathroom renos yes, in the same house, while living in the house. Longtime readers may recall our last renovation and all the adventures that came with Ron and Don, the brother team who did them. Ron, the general contractor who had a terrible temper and constantly swore at his crew, and Don, the dim-witted brother who didn’t seem to know how to use a level, much to Ron’s chagrin.

Who names their children Ronald and Donald, you may be asking yourself, and I will point out that it used to be quite fashionable to name twins with rhyming names, like Sherry and Terry. Perhaps their mother wished they were, in fact, twins.

That last renovation was completed five years ago; at the time I had been the recipient of some passive-aggressive commentary about our use of granite countertops and stainless steel appliances. Apparently those two things are destined to be the avocado appliances and orange linoleum of this generation. Well, five years in and I still mostly love our renovations; I thought I would share a few photos and see if there would be anything I would do differently.

Before I start with that, let me describe to you the house we purchased, seventeen years ago. The living area was painted Pepto Bismol pink, with shiny, forest green trim. The fireplace was 1970s gold rock, the kitchen had homemade cupboards that stuck every time you opened or closed them, and there were five different – but coordinating – patterns of wallpaper in the kitchen. Included in the kitchen was a dishwasher that used to be mobile, but was now stuck in a cut-out piece of the cupboards, the main bathroom had brown fixtures, the basement was panelboard and linoleum, and there was panelboard and outdated wallpaper in the bedrooms. You may be asking yourself why we purchased the house in the first place. Well, it was in a neighbourhood we loved – and I still love it; walking distance to schools, library, shopping, a swimming pool, great community feel, and large, beautiful trees and lots. This fixer-upper was within our budget and we did all of our first renovations ourselves, saving a ton of money, back in the day when we were just newlyweds starting out. I have fond memories of all the work we did, because we did it ourselves. Nothing bonds a couple like scraping wallpaper directly off drywall. I also have fond memories of the later renovations, because someone else did them, and did them quickly and – sailor-like swearing aside – efficiently. Shut up and take my money.

The very first thing we did in our house – other than paint over the pink and green – was to get rid of the brown fixtures in the bathroom. We replaced them with basic white ones, and a plain vanity from Rona. When we did our big renovation five years ago, we decided to get rid of the bathtub altogether. We have a bathtub in our second bathroom, but no one really baths in our house – we are a family of shower people. So, we put in a big steam shower instead! 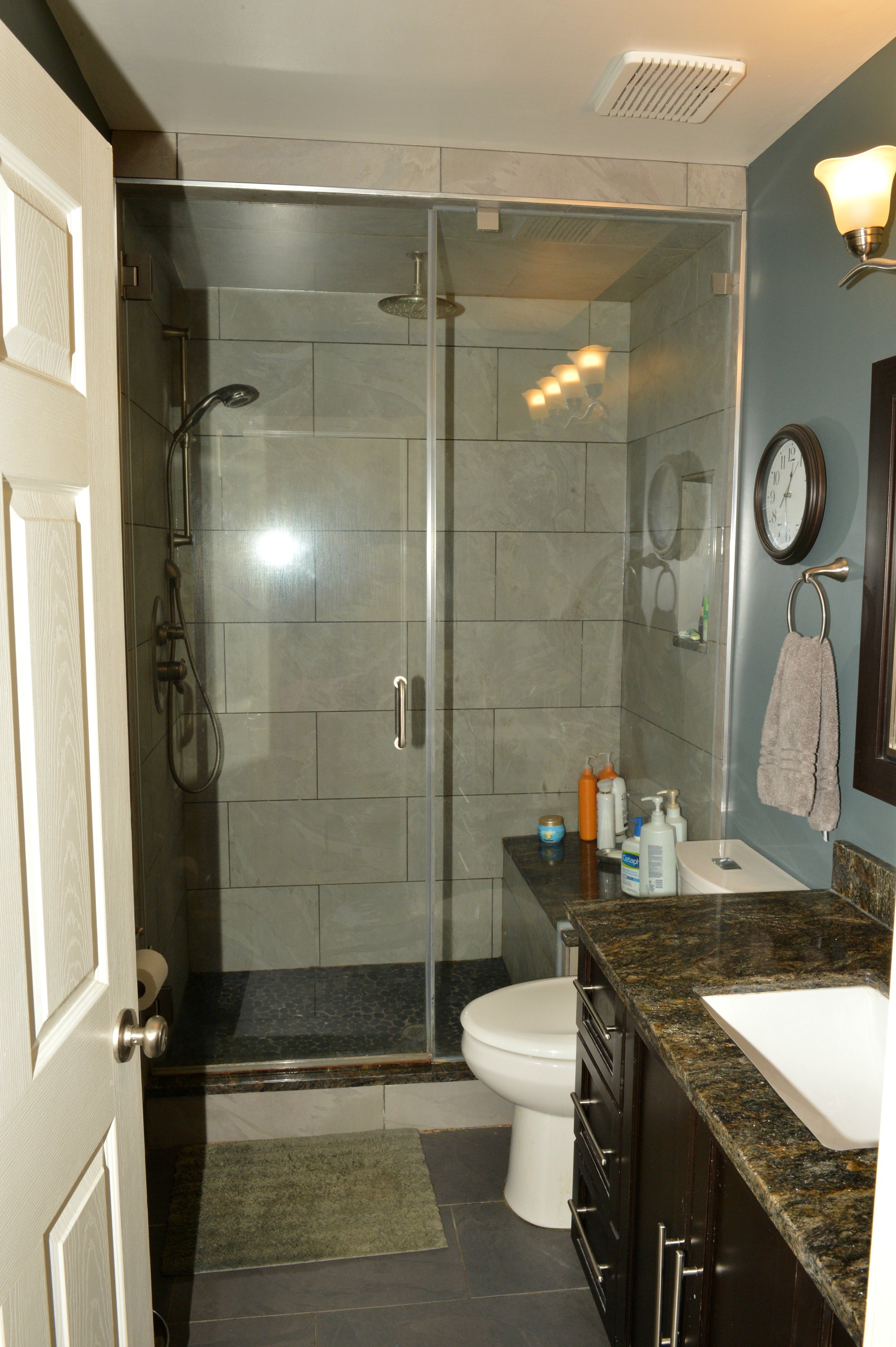 I’ve never regretted that decision for a second. We put in a fancy rain-showerhead, a regular hand-held showerhead, and a “body spray,” which to my knowledge no one in our family has ever used. If I was to do it over again, I would skip that fixture. I love having the bench in the shower; it makes it easy for product storage and also for shaving my legs. 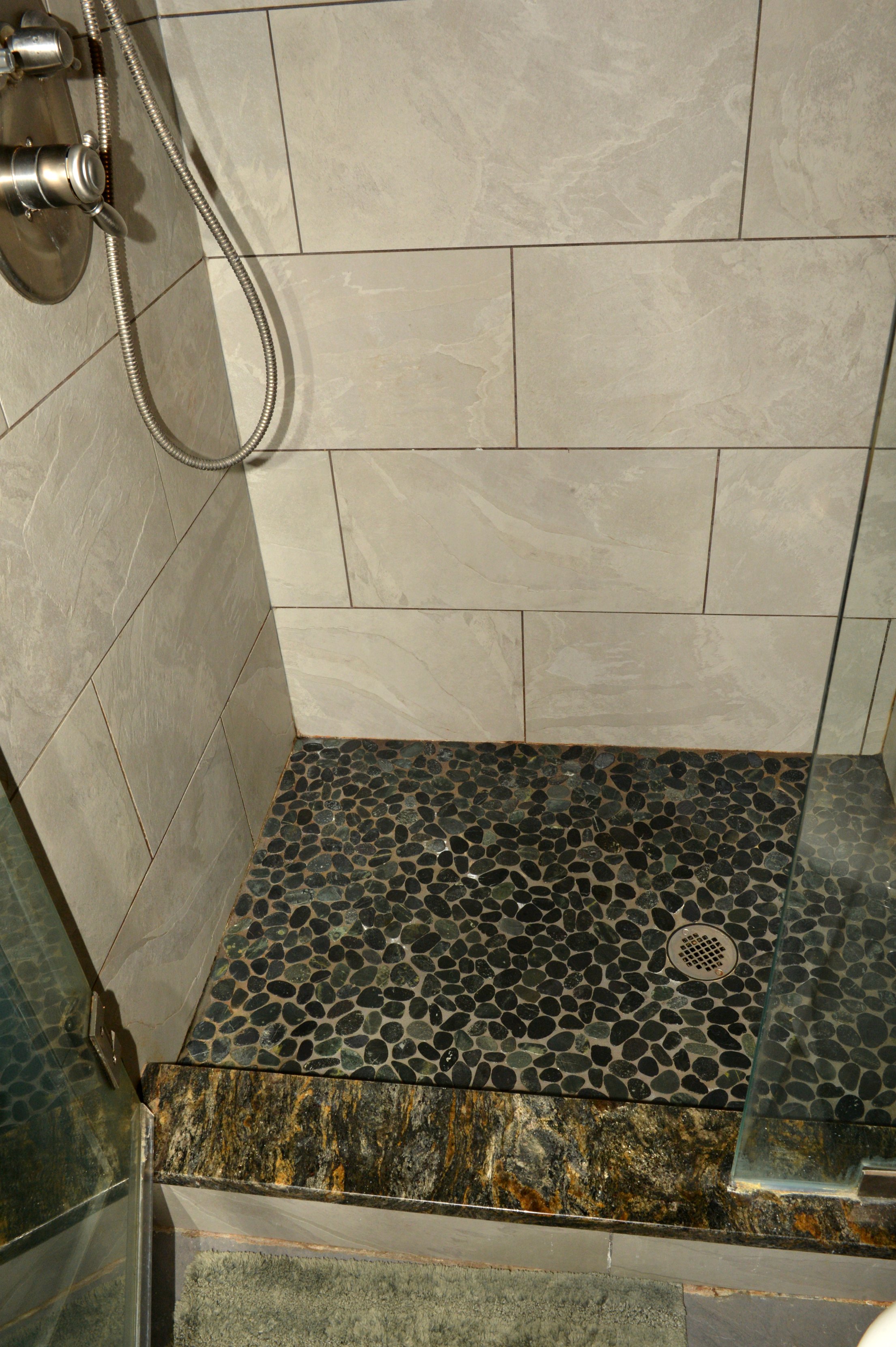 One thing I love about our bathroom is the shower floor – like standing on perfectly smooth river rock. It was something I saw in a friend’s house, and I immediately coveted it. 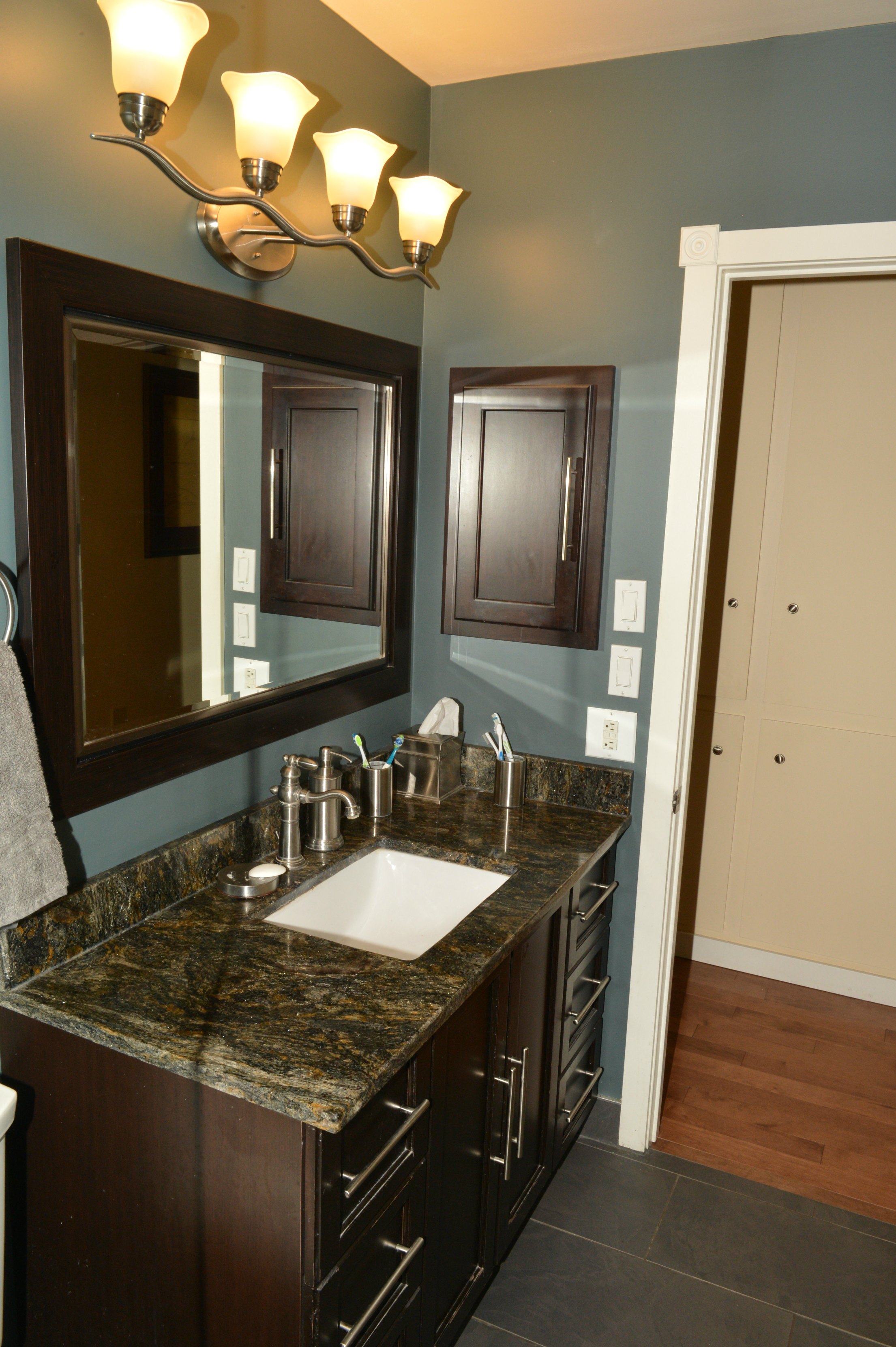 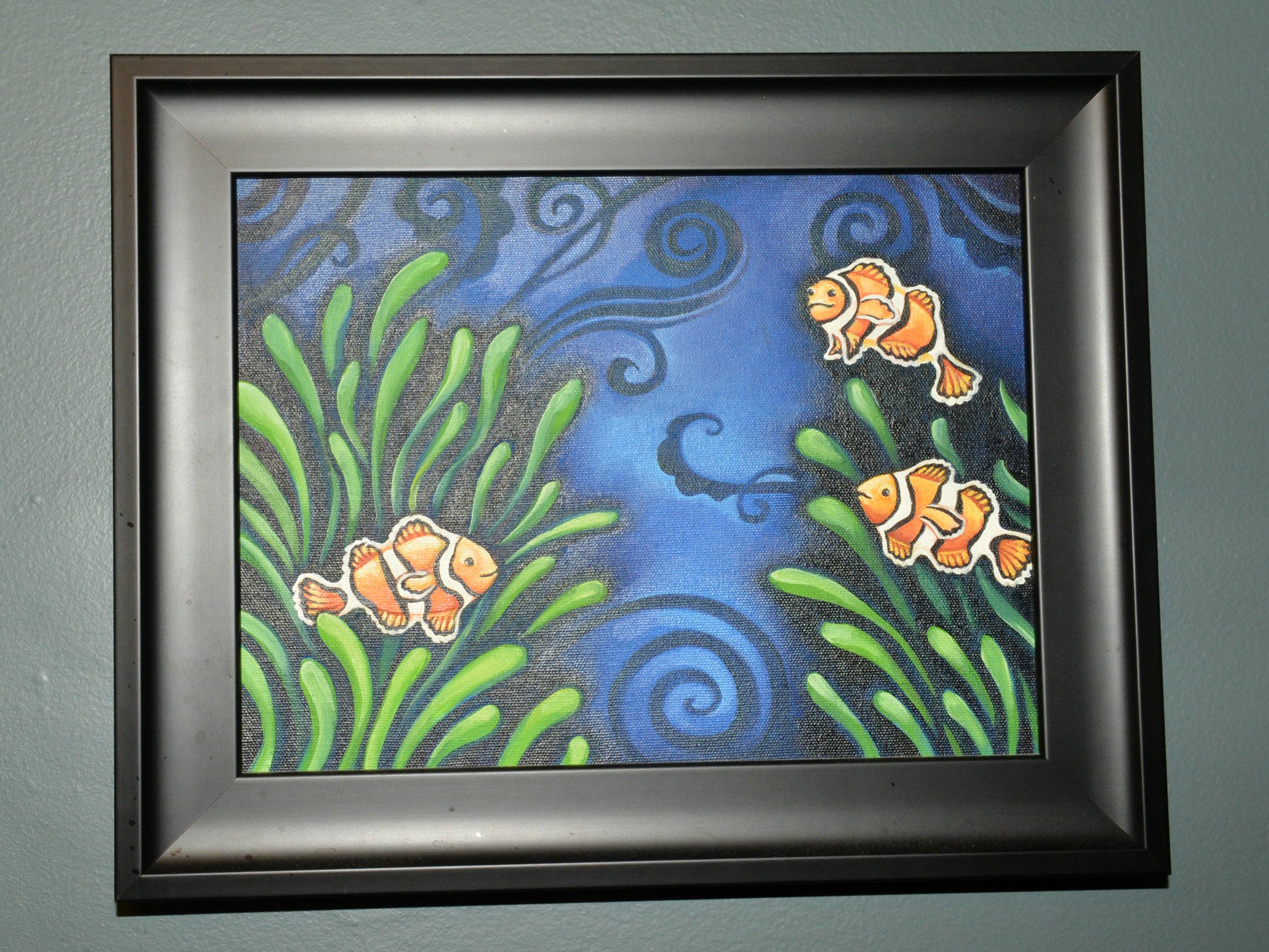 The granite countertop and trim on the bench matches that in the kitchen and around our house – but more on that next time! For now, here is the bathroom before we did the big reno: 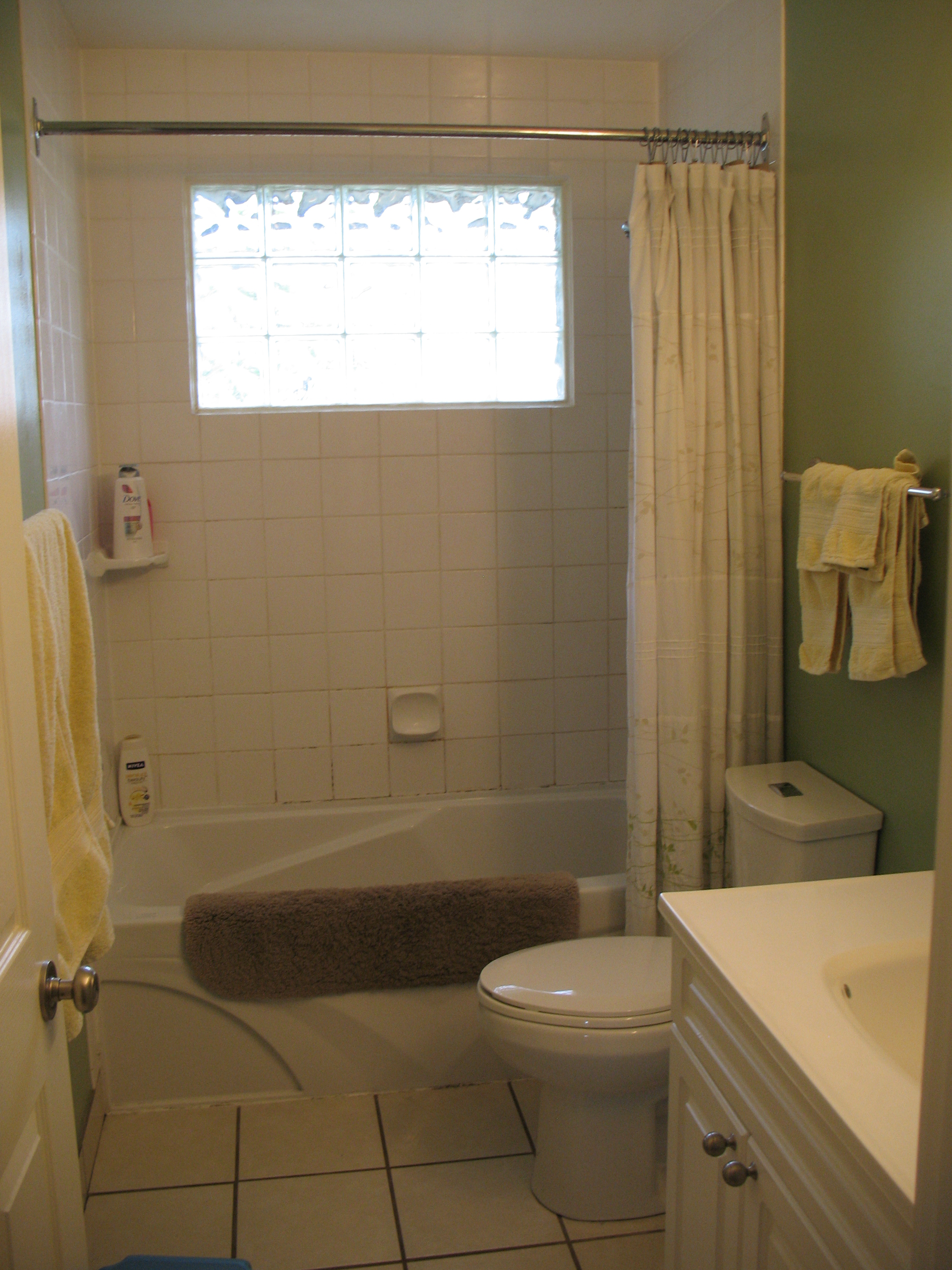 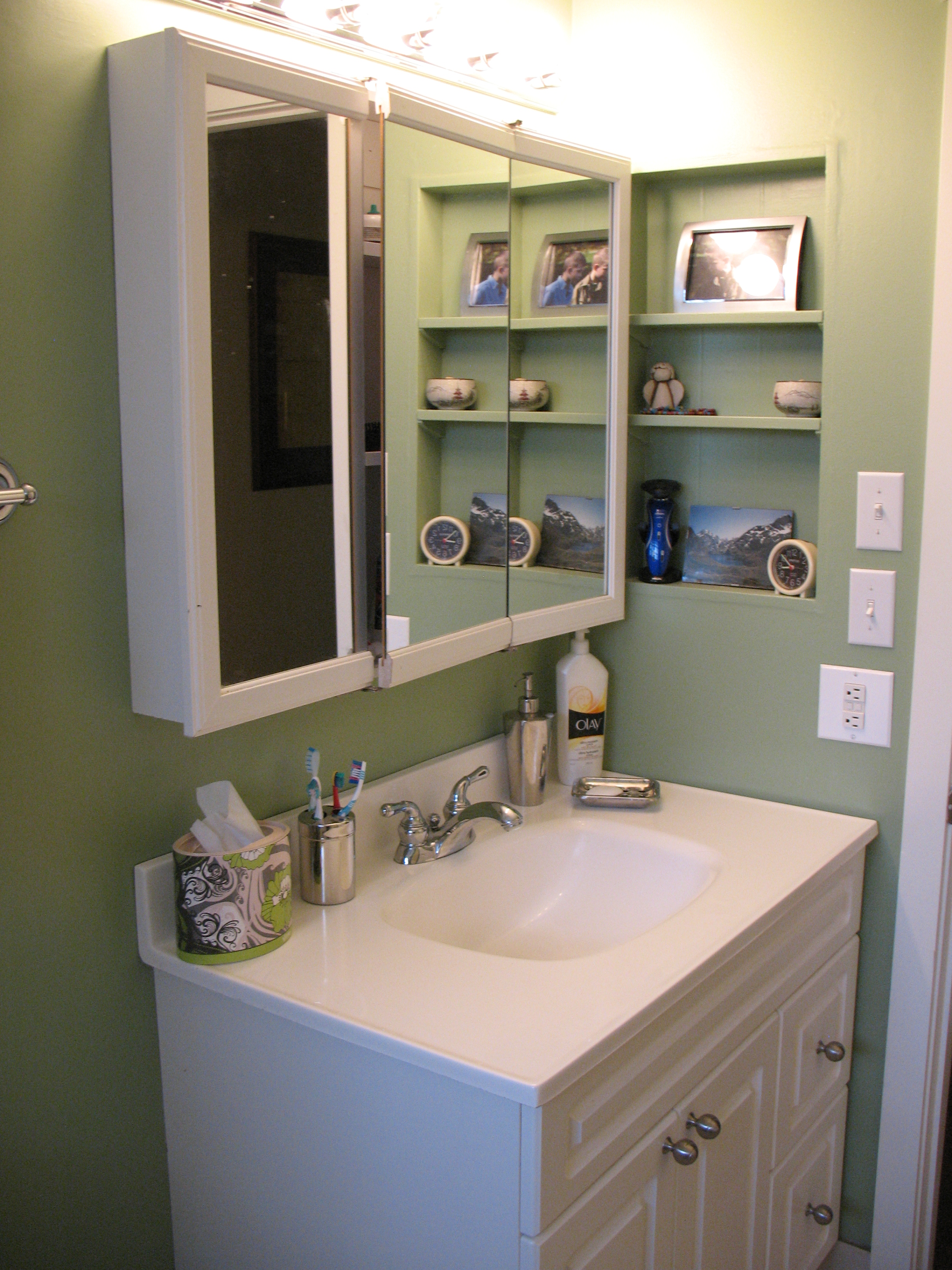 All in all, I’m very happy with our bathroom, five years in. Next time: the kitchen!