Search
Menu
Categories
‹ prev next ›
4
No One Here Gets Out Alive
May 24, 2017 Nicole Boyhouse Uncategorized

Today just seemed like an ordinary day, but apparently the apocalypse is upon us. How else to explain a lineup at Costco that looked like this, at 10:30 on a Wednesday morning? 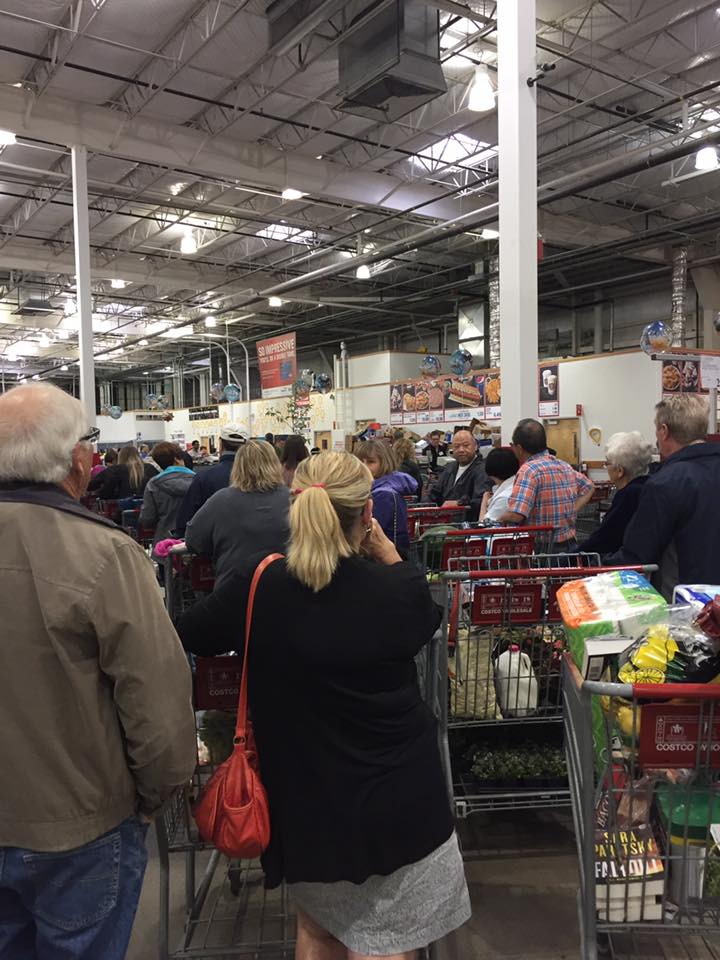 There was really no other explanation. It couldn’t have been the garden centre; May long weekend is done, and in any case there were only a few carts in the long lineups snaking down the aisles that contained plants. Getting into the chilled produce section was like marrying into the mafia; there was no getting out, once you were in. Carts were jammed in the aisles with no sample tables to be blamed; it was too early for the single servings of crackers and pepperoni to be handed out. When I finally made it through the lineup, the parking lot was a whole other adventure. It was like a cross between Frogger and Grand Theft Auto, what with cart-pushing people dodging the road raging vehicles, while the rain started and the wind picked up, in accordance with the giant storm brewing.

Maybe it IS the apocalypse.

Costco shopping is the one time that I really, really wish I had a Fitbit. I would love to know if pushing a giant, heavy cart and then unloading it and climbing up and down the stairs dozens of times to put the groceries away counts as “active minutes” and if so, how many calories are burned? I’m guessing enough to enjoy a whole bottle of wine, so it’s a good thing I don’t drink on weekdays.

I recently read something about women taking on the “mental load” in the house when it comes to housework and child-care-related chores and I would say that this is true in my house. Health and Welfare is definitely my department, and I am the one who has mental lists about what kinds of things need to be done to keep the house running smoothly. This is not to say that my husband is a neanderthal-type person who does nothing; quite the opposite, really. I would say that he takes on the mental load for things that I don’t even think about and don’t care to, so I would say that domestic/ financial/ health-related/ child-related/ vehicle chores are pretty well divided. Within reason, of course, since I work part-time, and part of that part-time is from home, so naturally there are many more domestic things that fall on my plate – epic trips to Costco, for example – than on his.

One of these things is, god help me, packing for vacations. Now, this is something that is less “falls on my plate” and more “I grab the plate and run with it because I trust no one to make correct decisions.” I know! It’s terrible. It’s also terrible for me to complain that no one helps me with packing when I actively discourage people to help me with packing. What can I say, I have a system, and regrettably it is a system that I refuse to let anyone else into. I’m a dream to be married to, you better believe it.

Actually, I personally think that I AM a dream to be married to, but maybe not when it comes to being aggressively territorial with packing and then resentful about it.

Where was I going with this? We spent the weekend road-tripping to visit with my mother-in-law. The weather was beautiful, which was probably the first May long weekend in history in which that was the case. We also had a lovely dinner with friends and that, as Forrest Gump says, is all I have to say about that.