It’s January, so no one should be surprised, but I still shuddered a little when I checked the weather forecast, and the following warning popped up at me:

BITTER COLD AHEAD FOR ALBERTA IN JANUARY 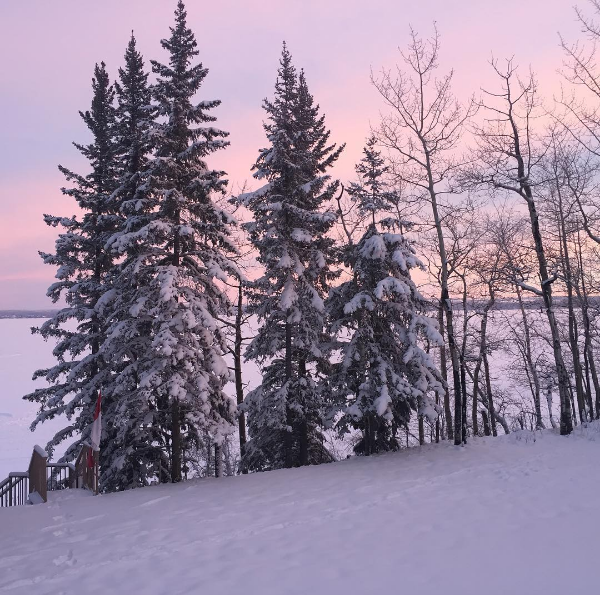 This was the view from my parents’ place on Boxing Day, when it was minus 32 with wind chill. Pretty! But so cold.

Well. ‘Tis the season, and there’s nothing for it but to bundle up and drink a lot of cinnamon tea, which is precisely what I am doing right now. That and keeping warm by thinking of our Florida holiday – we’ve been home over a month and I still haven’t written about Magic Kingdom! I shall rectify that immediately.

We went to Magic Kingdom on the third day of our holiday. Magic Kingdom is the most popular of all the Disney World parks, as evidenced by the giant double buses that transfer people from the resort. The funniest moment of the day came on the bus, on the way to Magic Kingdom. A group of moms with their kids were standing near us, holding the rails, and one little boy said, in a very loud and clear voice, “ARE YOU GOING TO POLE DANCE, MOMMY?” I am going to assume that she is a practitioner of pole dancing fitness classes, and not a stripper, but still, it was amusing.

At the Disney resorts, there are waiting areas for each of the buses, and it’s kind of alarming to see the huge lineup of people waiting for the Magic Kingdom bus; happily, since the buses are gigantic, they can accommodate a lot of people and all their strollers and paraphernalia. Of course, there are more strollers here than anywhere else, since Magic Kingdom is the park that is most enjoyable for the little ones. It is also the park that has the most toddler meltdowns per square foot, the most little girls dressed up like princesses, and the most mouse ears.

Side note on the princesses: IT IS ADORABLE. At Magic Kingdom, there are so many opportunities for kids to meet the “real” characters, and it seems like the big attractions are meeting Cinderella, Ariel, Belle, and the other big-name princesses whose names I do not know because I haven’t seen a Disney princess movie in some years. Kids can also get all dressed up, and get their hair done as well, for these experiences, so everywhere you look there are tiny princesses in pouffy dresses with updos and tiaras. It is pretty cute. Apparently there is a more masculine option for little boys – I think it’s to get dressed up as a pirate – but to be honest, I didn’t see any.

Interestingly, there is a rule at Disney that dressing up as a princess is only for the under-14 set. So if you have your heart set on wearing your ballgown and tiara to Disney, you had better save the luggage space for regular clothes. There is a very good reason for this, and that is that Disney doesn’t want unauthorized princesses on the premises, because guests might think that they are employees. This is very smart, because at Universal Studios, there are thousands of people walking around in Harry Potter robes, and it is easy to assume that you might be able to ask them questions about the park. It’s actually a bit disorienting, so I applaud Disney on that rule.

Another side note: the mouse ears. Remember back in the day when the only mouse ears were those felty black hats that had names embroidered on the back? Life has changed since then and there are so many mouse ear options. There are women walking around with bridal veil mouse ears, accompanied by girlfriends wearing sparkly bridesmaid-style mouse ears, there are Christmas-themed mouse ears, full-on Minnie Mouse ears with bows – pretty much anything you can imagine, you can buy.

Yet another side note: the fashion. The last time we went to Disney, I wore my support stockings under my capri-length jeans, and my mother was MORTIFIED on my behalf. I answered that if she saw what people wore at Disney, she wouldn’t be so concerned. Now, there are no judgments here. I am not the fashion police. I understand the desire to keep everyone together. And still. And still I was a little bit surprised at the sheer volume of groups of people wearing matching shirts. Smith Family Disney Vacation 2016! the shirts proclaimed, in bright colours. Daddy Mouse, Mommy Mouse, Brother Mouse, Sister Mouse said others. So many custom shirts in matching bright colours – even fluorescent tie-dyed ones. That’s great, but I have a question.

Do people wear the matching shirts every day and if so, how badly do they smell at the end of the vacation? Or do they wash them in the sink on a daily basis? I mean, it’s hot in Orlando. When we were there I was precluded from even being a fashion disaster by wearing my support hose, because it was too hot. The thought of putting on my medical grade stockings made me want to die, so I didn’t. So, you can imagine how hot and sweaty and humid things are – what happens to the matching t-shirts?

Also, occasionally I would see a teenage girl wearing her matching monogrammed shirt, trying desperately to pretend that she didn’t belong to the super-embarrassing group. It reminded me of Rusty in European Vacation, with his monogrammed beret. Won’t someone think of the teenagers? If my parents had, GOD FORBID, made me wear a matching shirt when I was that age, I would have literally died.

Anyway. Back to the park. We split our day up into two parts: we went early in the morning for a few hours, and then went back later for fireworks and extended “Magic Hours,” which meant we were there until 1:00 in the morning. Zzzz. Magic Kingdom is kind of old-school, with rides I absolutely love, like the Jungle Cruise. 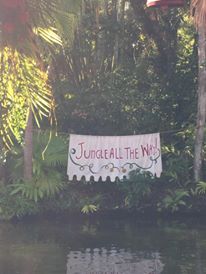 Everything was decorated for Christmas, including the fake tarantula: 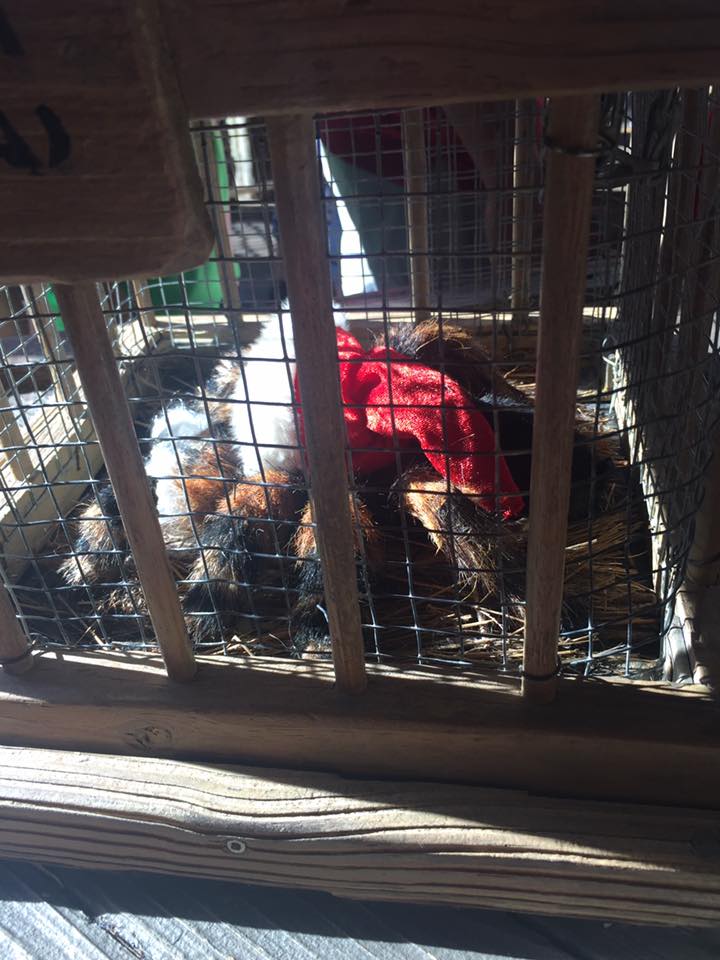 I ended up wondering about the employees, as is my wont, and particularly if the rehearsed speeches by the Jungle Cruise Tour Guides would haunt them in their sleep. How many times would a Jungle Cruise guide – or ANY employee dealing with public speaking – say the same exact thing during a shift? Would you go home and just start cracking bad jokes about watching your step, so you wouldn’t have TWO bad trips instead of one? Would it just become second nature to say “I’m Nicole, I’ll be your skipper today” when meeting someone new? When I worked at Pizza Hut as a teenager, I often answered our home phone with “Hunterhorn Pizza Hut, Nicole speaking.” I can only imagine.

Magic Kingdom is split into Tomorrowland (featuring Space Mountain), Adventureland, Fantasyland, and, my kids’ favourite, Frontierland. Frontierland is home to Big Thunder Mountain and Splash Mountain, both big favourites in the Boyhouse. I lost count of how many times we went on those. We were only able to go on the Seven Dwarfs Mine Train once, but it was very fun. There is also the famous Sleeping Beauty castle, which is kind of dull to walk through, unless you are having breakfast with Cinderella or something. It makes a fabulous backdrop for a photo though. 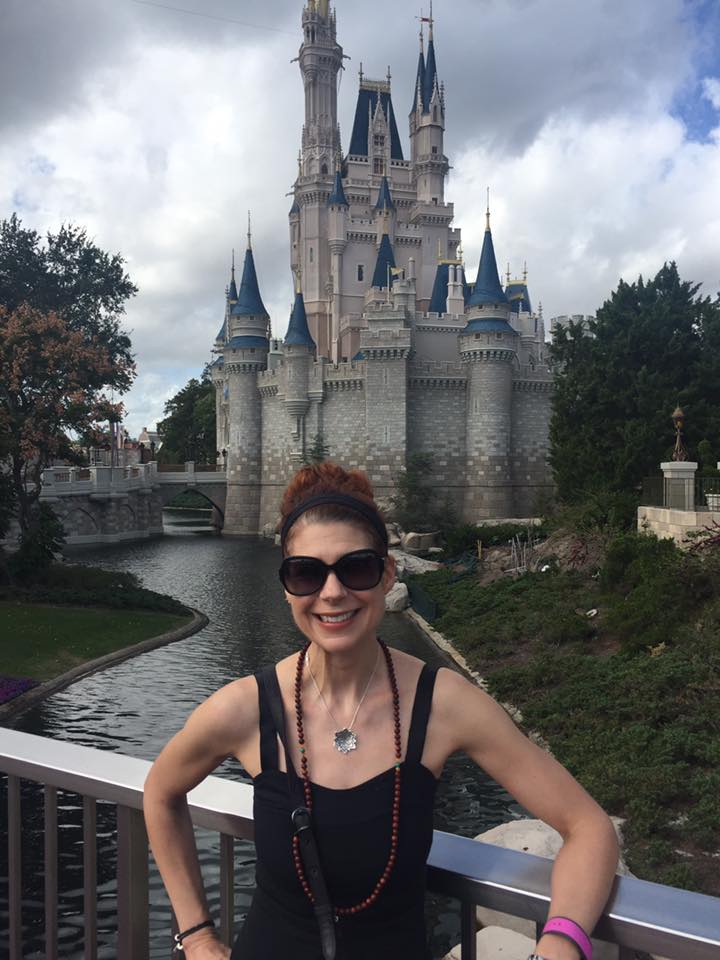 The most special experience of the trip was the fireworks. After our morning at Magic Kingdom and an afternoon relaxing by the resort pool, we went back for fireworks. The best place to view them, after some discussion with employees, is on the green space between Casey’s Corner and the ice cream parlor on Main Street. The fireworks start at ten, but we were pretty exhausted, so settled on a patch of grass shortly before nine. It was well worth the wait. The experience was truly incredible. No one does fireworks like Disney.

After the fireworks we slowly edged our way through the massive crowds – be prepared for MASSIVE CROWDS – and enjoyed the shorter lineups for Magic Hours. We then dragged our exhausted selves to the bus stop and waited for what seemed like an interminable time for our bus. It was probably only 15 or 20 minutes but at that point we had walked for 19.1 kilometers, we had been up and at it since 6:30 in the morning, and we were pretty tired of people, in general. Still, a great day and a wonderful experience. I didn’t meet any Disney characters but I did get to eat a delicious frozen strawberry bar, so I call it a draw.