This morning my husband went back to work after three weeks off, and on that festive note, I headed to the dentist for a cleaning and checkup. What better way to start out a week after so much fun family time? I’m happy to have modern dentistry at my disposal and I like having non-rotten teeth, but good lord teeth scaling is AGONIZING. Something about having a variety of metal picks scraping my teeth and occasionally jabbing my gums for the better part of an hour makes my hands clench and my entire body tense up. I would much rather undergo a pelvic exam given by Keyshawn Johnson than get my teeth scaled.

Oh well, at least my teeth are nice and shiny now. And Monday morning isn’t all bad: Judy Blume tweeted me! I’d like to say that it was because she loved my Deenie and Are you there God? It’s me Margaret. recaps over on Throwing It Back, but it was in response to a comment about her latest book, In The Unlikely Event. In case you’re in doubt, it’s a very good read and I highly recommend it. 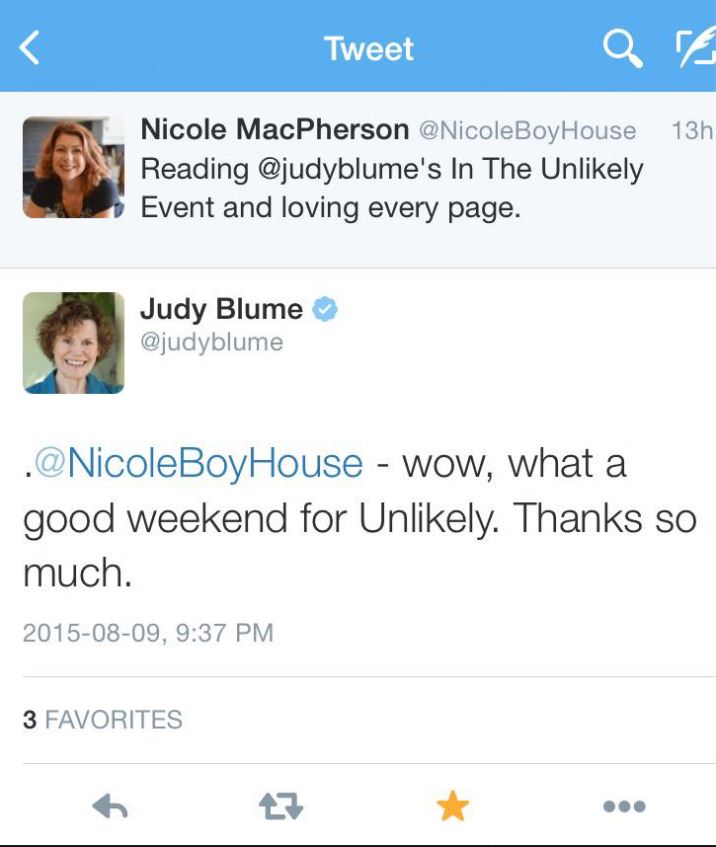 I was already a Fangirl, now I’m a SuperFangirl.

This weekend was not without excitement, either. We were at my parents’ place at the lake, and the weather was perfect. On Saturday my mother and I went into town to do a little shopping, and as we were walking down the street, I heard the thumping strains of Thunderstruck slowly approaching. I turned to see where it was coming from, and there, slowly cruising the main drag, was a shiny, pimped-up Dodge Challenger, windows rolled down to reveal a middle-aged man in a ball cap. It was so awesome I actually laughed in delight, and received a glance and a nod. I don’t get many glances-and-nods these days so that just made it better. We saw him again later, this time blasting Hells Bells. Was he just cruising the strip? Was he looking for a parking space and just happened to have ACDC blaring? Was he driving in loops, enjoying his tricked-out muscle car? We will never know the answer.

The other notable thing that happened this weekend is that I went for a bike ride with my husband. My husband has given up golf in favour of cycling, and he isn’t one of those “half-measures” kind of people.

Digression: “half-measures” always makes me think of Mike from Breaking Bad. Will any other show ever be as well written/ heart-palpitation inducing?

Anyway, my husband has taken up cycling, and during our time at the in-laws’ he clocked more than 120 kilometers. On Friday night he asked if I wanted to go for a “little ride” with him and I accepted, having stepped on the scale earlier that day and being horrified by the result (more on that later). The “little ride” turned into an hour and a half and 17 kilometers, which is the longest ride I have gone on for many, many years. Possibly ever. I was a little sore the next day – my butt! – but I welcomed the extra exercise.

Another digression: my friend Lyn (HI LYN) thought that, taken out of context, saying my husband took me for an hour and a half ride is really quite funny and not safe for work. Pretty sure THAT kind of physical activity would leave me even more sore.

In my last post I mentioned I was a victim of Shrinking Pants Syndrome, but I didn’t realize how bad things had become until I stepped on the scale. People, I have gained seven pounds since June. Seven pounds. In less than two months. Some of you might think this is no big deal, but believe me, it’s a huge deal. For one thing, I have an extensive wardrobe but all my clothes are the same size. Nothing fits right now and I am very uncomfortable. Now, don’t worry, I’m not going to subject you to my new diet-and-exercise program, because that will just bore and depress us both. But I am thinking there will be more evening bike rides in my future.