It all started last week when my husband was talking about the appointment he’d made to get the oil changed on my van. This, along with basically all car-related things, is a blue job. I don’t deal with car-related jobs, I just don’t. My husband is happy to do them and I’m happy to let him. I hadn’t taken a vehicle in to get an oil change since I got married, which really says something. I mean, it’s not the reason I got married or anything, but it’s handy.

But for this appointment, there were several conflicts. My husband had a number of things to do, the boys had karate and sparring, and it was just a big mess, so I offered to take the van in. It’s my van, after all, and it’s not like I’m actually changing the oil myself. We had an appointment, and the car dealership had assured my husband that the whole thing would take between an hour and ninety minutes to complete. I had ulterior motives to offering to take the van in; mainly, I wanted a free manicure.

When we bought the van in 2013, the fellow who was showing me all the features on the car (yes, including the lighted mirrors) informed me that when the car needed servicing, there was a nail bar for my girly convenience. Now, some might be outraged at the idea that the dealership was condescendingly catering towards their female clientele, but I say bring on the gel polish. This dealership has a kids’ play area complete with X-Box, a cappuccino machine, a flat-screen TV, free Wi-Fi, and a NAIL BAR. Sign me up and shut the front door.

I was a bit nervous about driving there, since it was in a part of the city I am unfamiliar with, but my husband walked me through it on the map, and off I went. As I was pulling up to the dealership I could hear my text messages going off, but because I am A VERY RESPONSIBLE DRIVER I did not check them. I just assumed it was my husband, probably worried that I was lost and had accidentally left town. This has actually happened before, so it’s a valid concern.

I pulled in, and chatted with the service manager. “Am I in the right place?” I asked, sweetly. “My husband usually brings the car in.” (USUALLY. Ha!) The service manager looked a little concerned, and asked if he was picking me up shortly. “Oh no,” I responded. “I’m just going to wait.” The service manager gravely said that it could be four hours until it was done, which took me by surprise, but since I was stranded at the dealership thirty minutes away from my house, I took it in stride. “You can get your nails done over there, while you wait.” he said, so I scurried off.

The texts were from my husband, and I called him to let him know that I would be here a while, at which point he kind of hit the roof  in a “What? Four hours? What the fuck? They said an hour! Why don’t you leave. Fuck this! I’m going to call and complain.” kind of way. I didn’t think leaving was particularly practical; we were going to have to get the oil changed sometime soon anyway, and I just drove for thirty minutes, and I wanted a manicure. So I settled in for the wait. I had brought some work with me and my phone, so it wouldn’t be too bad, I didn’t think.

I got my manicure – gel polish and all, this stuff is amazing. Then I settled in to a chair with some free mineral water and my phone, and did some reading. It was kind of boring, but not so bad. I wrote a pitch, I read some blogs, I played several games of Trivia Crack. I noticed the service manager looking at me a bit nervously, but didn’t think much of it.

I started to get hungry, but the only restaurant close by was Hooters, and so I drank more mineral water. I didn’t really want to go for a walk; the neighbourhood is kind of the hood, and so I wasn’t comfortable with wandering. Plus, with my sense of direction I could have ended up anywhere. I read a National Geographic about a Mexican food festival. The service manager kept looking at me.

Around three o’clock – two and a half hours after my arrival – the service manager came up to me and with a very serious face told me that the car was in the shop, now, and hopefully it wouldn’t be too much longer. “Oh good!” I responded. “Any idea how much longer?” He shook his head and said he’d check and get back to me. I went back to my Trivia Crack.

At four o’clock, the manager came over to tell me that the car was finished – the computers were down, so he was giving me a handwritten receipt and would email the full receipt later. He said he knew how important it was that I get out of there, and apologized profusely. At this point it was three and a half hours, not four, so I considered myself fairly lucky. “It’s okay,” I said to the obviously-stressed-and-apologetic manager, “At least I got my nails done!” I smiled but he didn’t. Instead, he handed me a card, saying it was his personal business card, and the next time I needed servicing, I could call him and he would make sure everything went smoothly. He gave me a free emergency kit for the car, complete with flares. He apologized again, and I went on my merry way, feeling proud that a) I had driven to the dealership without incident, b) I had taken the car in for an oil change like a strong, invincible woman, and c) I knew how to get home without finding myself heading to Saskatchewan or the United States.

It turns out that when I was there, my husband had called to complain, just like he said he would. However, he complained in a much more, shall we say, angry way than I anticipated, using terms like “pissed off,” “never coming back,” and intimating that whoever handled the appointments was terrible at their job. So while I was happily getting my nails done and reading Tom and Lorenzo’s take on last week’s Mad Men, the manager was eyeing me like I was a ticking time bomb. Don’t mess with that woman; you don’t want to deal with her husband!

You guys, I was playing Good Cop/ Bad Cop and I didn’t even know it.

Nonetheless, I am willing to take the car in the next time it needs an oil change. My nails look GREAT. 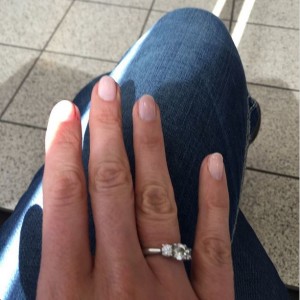