So I guess we’re cheering for the Seahawks now? 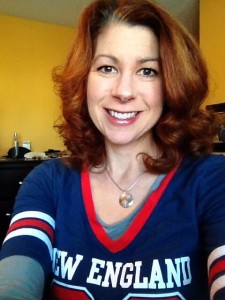 This photo is for the Cake Chick who was appalled to see me in Ravens wear last Superbowl.

Even my local old-people Co-Op was on the Patriots (short lived) bandwagon: 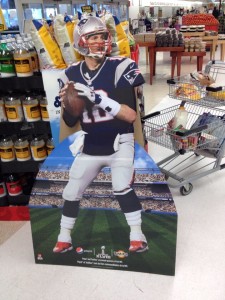 What a dreamboat, or, as I usually think of him because I’m apparently 100 years old, “What a good looking young man.”

It’s very strange, the whole continent seems to be in some kind of polar vortex/ snowpocalypse, and here in Calgary, things are mild. We’re usually the trendsetters in the polar vortex world, and yet here we are with warmer-than-seasonal temperatures, which is not without its own special difficulties. My elderly neighbour has gotten her vehicle stuck in the soft, melty snow in the alley twice in the last week; once I came home to see her trying to dig herself out, alarmingly, and yesterday I came home to see her son trying – in a futile sort of way – to dig her out. This morning there were three vehicles stuck in the alley, in the ridges left by the garbage trucks. The snow everywhere is melting in the sunshine and then freezing solid, leaving skating rinks for sidewalks and glaciers for lawns.

Sunday afternoon I decided enough was enough – the melting cycle had exposed our back yard for what it is, a dog’s yard – and I went out with a trowel in one hand and bags in the other, determined to tackle the unsightly mess. I’m happy enough with the warmer temperatures but the picturesque quality of the snowy backyard is gone, and in its place is glacier like snow speckled with dirt, pine needles, and frozen canine fecal matter. I tried my best but sadly most of Barkley’s offerings to the atmosphere were frozen solid and would have needed an ice pick to be chipped away. I sighed, wondering what was the point.

What was the point? That’s a terrible attitude to have. In these cases, I always think of my friend Swistle and her “drops IN the bucket“. They may be drops in the bucket, but they are still IN the bucket, and IN > NOT IN. I think this is a good attitude to have, because no, it does not need to be all or nothing. Just because I couldn’t clean up the entire yard doesn’t mean I should shrug and let the frozen fecal matter take over. A handful of minty M&M’s doesn’t mean that the whole day of healthy eating is ruined and I might as well eat all the snack bags of Doritos that are sitting in the kids’ Halloween bags (STILL, yes, it is January). This is a basic mathematical principle, people. Handful of minty M&M’s >>>> eating everything in the house. Small steps DO add up and so while it may feel pointless to sweep up all the pine needles on the floor knowing that the dog is just going to track in MORE pine needles momentarily, it still makes a difference. After all if I never swept up the pine needles, eventually we would be ankle deep in them. Have I mentioned Barkley is very furry this time of year and everything sticks to his gigantically fluffy body?

Last night I had a dream that we got another puppy. I blame my friend Sue for sending me this link of the cutest puppies on the internet. Go take a look, I’ll wait.

I showed the photos to the boys, who were appropriately “awwwwwwwed” by the photos, even while Jake was indignant that Barkley was not among them. They’re cute, he said somewhat grudgingly, But Barkley is cuter than all of them put together.

Without any further ado, then, I give you Barkley: The Puppy Days. 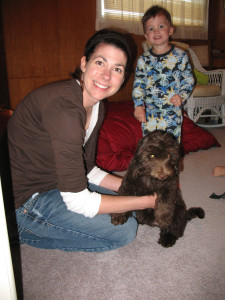 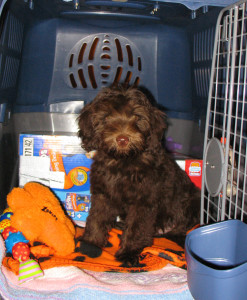 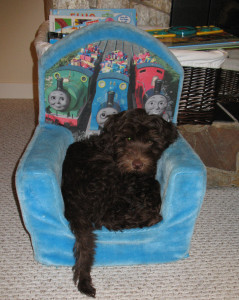 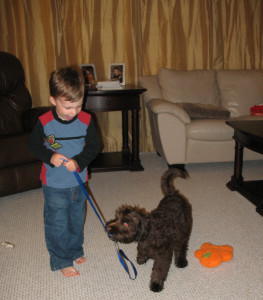