I have been relentlessly cheery today, so much so that I’m even annoying myself. Maybe it’s all the green smoothies I’ve been drinking; today I made one with frozen strawberries and, while it was very tasty, it looked like sludge. 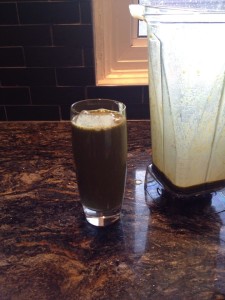 But it has a great personality!

I think my cheerfulness is actually directly related to the unseasonably warm temperatures we have been experiencing. It’s a spring-like feeling, the sun shining and the snow melting into messy piles of brown slush that very closely approximate the “great personality but non-photogenic” smoothie I had for lunch, which is a little disturbing to think about. Spring in January! Obviously I am not taken in by this; I recognize we have a solid four months before spring is actually here, but that does not mean I am not enjoying being able to move my fingers while walking the dog.

So I’m feeling cheerful and have spent the morning happily doing things around the house, singing random cheerful songs like “Burning Love” and “Sweet City Woman” and even, strangely enough, “Tie a Yellow Ribbon Round the Old Oak Tree”. I’m not singing these songs now, however, because the boys are home and they have a friend over. I have to keep checking to ensure that there is just one extra kid, because by the sounds of it there are about 40. What are they doing that necessitates so much enthusiastic yelling? I DO NOT KNOW. Well, it’s Friday, and in approximately ninety minutes I’m going to pour myself a big glass of wine and watch Downton Abbey. My husband and I, for the past several months, have been working our way through all six seasons of The Sopranos, which we own on DVD. Why we have all six seasons on DVD I cannot explain, but we have been doggedly watching them like it’s our duty to humanity. We swore we wouldn’t start a new series until we finished, and finally, finally last weekend we finished. I know I’m about seven years late to this party, but that was certainly an anticlimactic ending. I was expecting some sort of apocalyptic-all-ends-tied-up Breaking Bad-esque ending, but no.

In any case, I am now free, free as a bird – AND THIS BIRD YOU CANNOT CHANGE – and so I started watching Downton Abbey on Netflix. Here’s the problem: as a rule, I do not watch television during the day, unless you count the morning “news” I watch while eating breakfast. Lately I haven’t even been watching that because the local newscast has almost exclusively focused on a) FLU OUTBREAK PANIC PANIC PANIC EVERYONE GET YOUR FLU SHOTS OMG OMG WE ARE ALL GOING TO DIE, followed by b) we are all out of flu shots and we don’t know why. I can conjecture why. In any case I’m sure there were other things happening in the world, however, by the time the local news decided that “other events” were worthy of coverage, I would have already turned the television off in exasperation at hearing the same flu clinics are mobbed we’re all going to die and now we’re out of vaccines, sorry, we can’t imagine why there was such sudden demand. It’s been so bad that I find myself watching the Business News Network with my husband and having earnest conversations on whether or not to hedge our currency exposure.

Sorry, I nodded off for a second there.

Anyway, back to Downton Abbey. I find myself hopelessly addicted to this show, but the problem is my husband seems to be completely uninterested for some reason. Apparently if the show doesn’t contain strip clubs, chopping off people’s heads and hands before sending them to a watery grave, murderous rampages, or a former junkie chained to an underground meth lab who is forced to produce crystal for a dead-eyed sociopath who is in love with a logistics coordinator for a manufacturing conglomerate who is illegally shipping said meth around the world, then my husband is just not interested. Even when I explained it was a British period drama about social hierarchies, he remained unmoved. And so I’m trying to watch the episodes before he comes home from work in the evenings, but that is proving to be difficult, what with preparing dinner, and cleaning up from dinner, and supervising homework. Apparently trying to voraciously wolf down episodes on the sly is not in keeping with being an involved parent.

Why not, you may say, just watch the episodes while he was home? Screw it, as it were. Well, the issue here is that my husband actually likes to TALK to me, apparently. He finds me scintillating for some reason. And trying to carry a conversation – even one about currency exposure and should we be looking at Asia? – while constantly pausing and rewinding Downton Abbey just isn’t working for me. So I think I’ll knock off a bit early today, and spend the rest of this lovely Friday afternoon conjecturing if Bates and Anna are going to get it on, servant style. What? I’m only on the first season, DON’T TELL ME.