Friday night I had some girlfriends over to watch The Breakfast Club and eat that dinner beloved by women everywhere: the dinner made up of appetizers.  In related news, I think I may have overdosed on cheese products.  The Breakfast Club is one of my all-time favourite movies, but when we watched it this time, we all started to wonder about our own children and their upcoming teenage years.  That was a little unnerving.  Will my children be a part of the physics club and hide flare guns in their lockers due to anxiety about an F in shop class?  Do they even offer shop class anymore?  I’m pretty sure they won’t be on the wrestling team and taping other kids’ butt cheeks together, but I suppose you never know.

The next day I had a hair appointment and, despite all common sense, advice from friends, and knowledge about myself and my well-authenticated fear of change, I ended up with 2 1/2 inches less hair.  It started innocently enough; I wanted to refresh my colour as it had faded to a rather unattractive orange, and I had a discussion with my hair therapist (that IS her job title) about my fears of turning into Mullet Lady.  Well, she said, why don’t we give it a little cut then?  Nothing drastic.  Remember Starsky and Hutch?  DO IT. 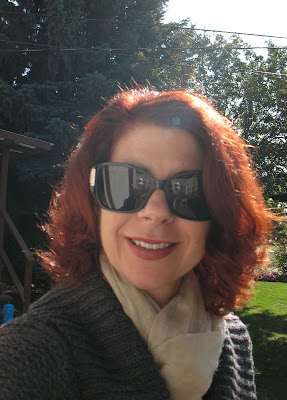 It’s HARD to take pictures of yourself.  Or, it’s hard for me.
Regrets, I’ve had a few.  So as I was practicing non-attachment – it’s only hair, it grows, in a month it won’t be falling out of my teeny tiny bun – I attended a family dinner at my parents’ house.  Now, here is a bit of background information for those of you who don’t already know this.  Back in January I decided to give up my nightly glass of wine.  I now only partake in wine consumption on evenings that I do not have to get up early for yoga the next day; in other words, Friday and Saturday evenings only.  (I do practice on Sunday mornings, but not until 9:00, and there is only so much one can expect from oneself.)  Yesterday, my mother asked if I wouldn’t like a glass of wine, and when I declined, she looked at me incredulously and asked if I was pregnant.  Pregnant!  My sister-in-law suggested that since I wasn’t huddled in a corner in the fetal position and sobbing, I probably WASN’T pregnant.  She knows me well.
It did remind me of the pregnancy scare I had a few years back.  My kids were one and two years old.  I hadn’t had my period in months.  I had taken a number of pregnancy tests; they were all negative.  Still, it’s hard to ignore a symptom like not having your period for months.  So one day I was grocery shopping with the two little guys in the giant Superstore cart, and I picked up yet another home pregnancy test.  The most accurate home pregnancy test! the box claimed.  I wrangled my kids into their five-point car seats, I started to drive home, and it hit me: what if I took the test and it was positive?  What then?  I would have to use the back row of the minivan.  The kids would have to share a room.  I would lose all remaining vestiges of my sanity.  I already had a full double stroller, what would I do with a third child?  I could barely get out of the house with two children, how would I manage with three?  I had a complete panic attack and pulled the car over, put my head down on the steering wheel, and sobbed.
I got my period the next day.  I also had validation that two was the perfect number for me.