Search
Menu
Categories
‹ prev next ›
5
My body is a temple
July 25, 2019 Nicole Boyhouse Eating a Rainbow

Let’s Talk About The Weather

Here we are in the last full week of July, and we are actually having a summer! A whole week of summer weather, which, as we all know, is all relative considering other places in the world. For example, on Wednesday it was 31 degrees, which would be considered just a run-of-the-mill summer day in many, many places, but in Calgary it was the hottest day of the year. A couple of days in a row like that and it would be all over the news, HEAT WAVE AND HEAT WARNINGS IN EFFECT. Sadly for the reporters who were probably eager to encourage people to hydrate and stay cool, it was only a one-day event; yesterday was cool and windy, with some rain to boot.

Am I really talking this much about the weather? Yes. I wonder what it would be like to live in a place in which summer was just summer, and not some crazy, who-knows-what-will-happen-it-could-snow-tomorrow season. Would I just stop appreciating the beauty and warmth of summer days? As it was, every spare minute I had I was out in the garden or reading on my outdoor glider, looking up to smile at my flowers and at the tiny little birds who seemed to be playing a game on my yarrow. These tiny birds would alight on top of my yarrow, which is not sturdy enough even for their weight, and so it would slowly sink to the ground. Then the birds would flap around and do it again. Over and over, they appeared to just enjoy riding my yarrow, which was the most adorable thing I think I have ever seen. 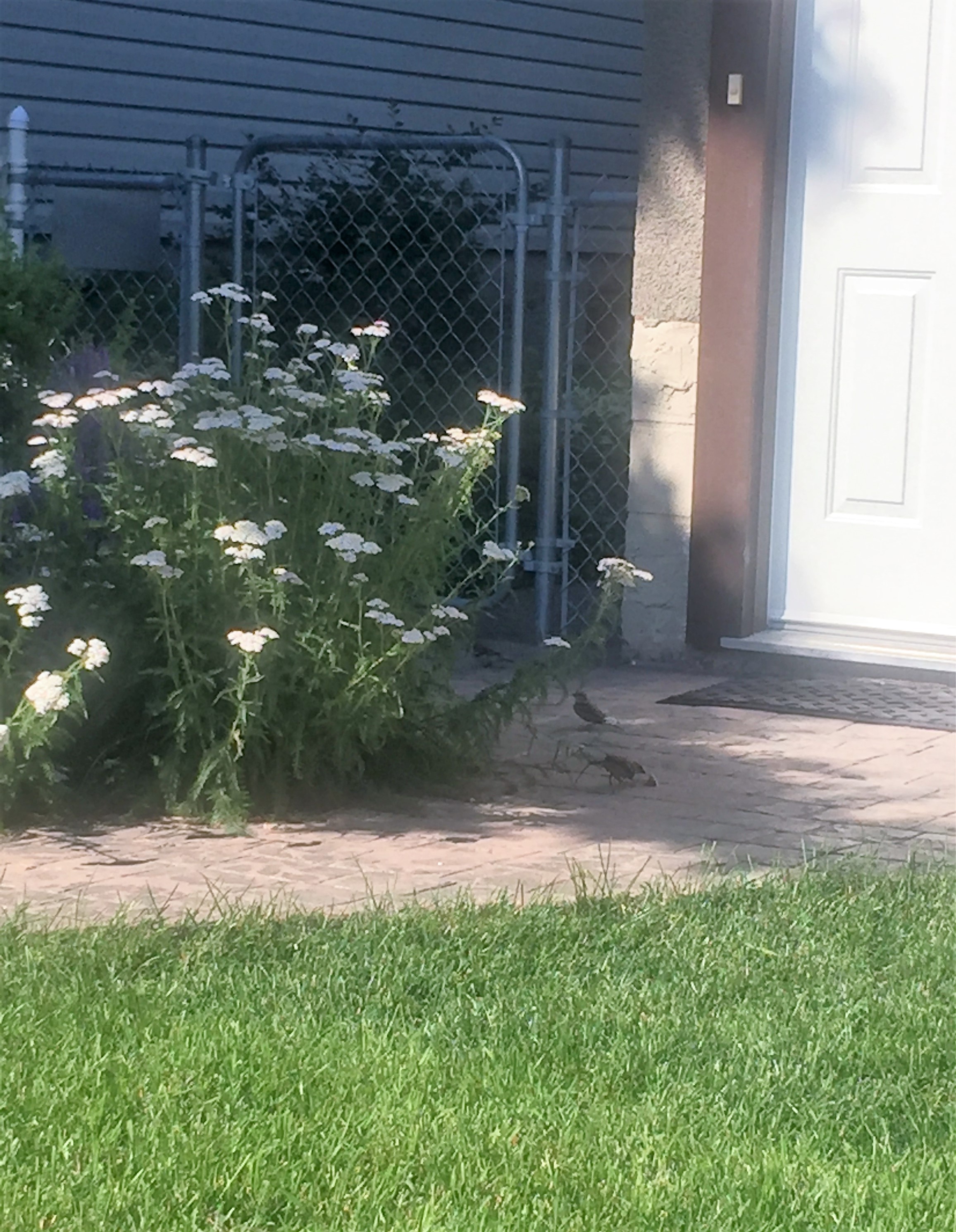 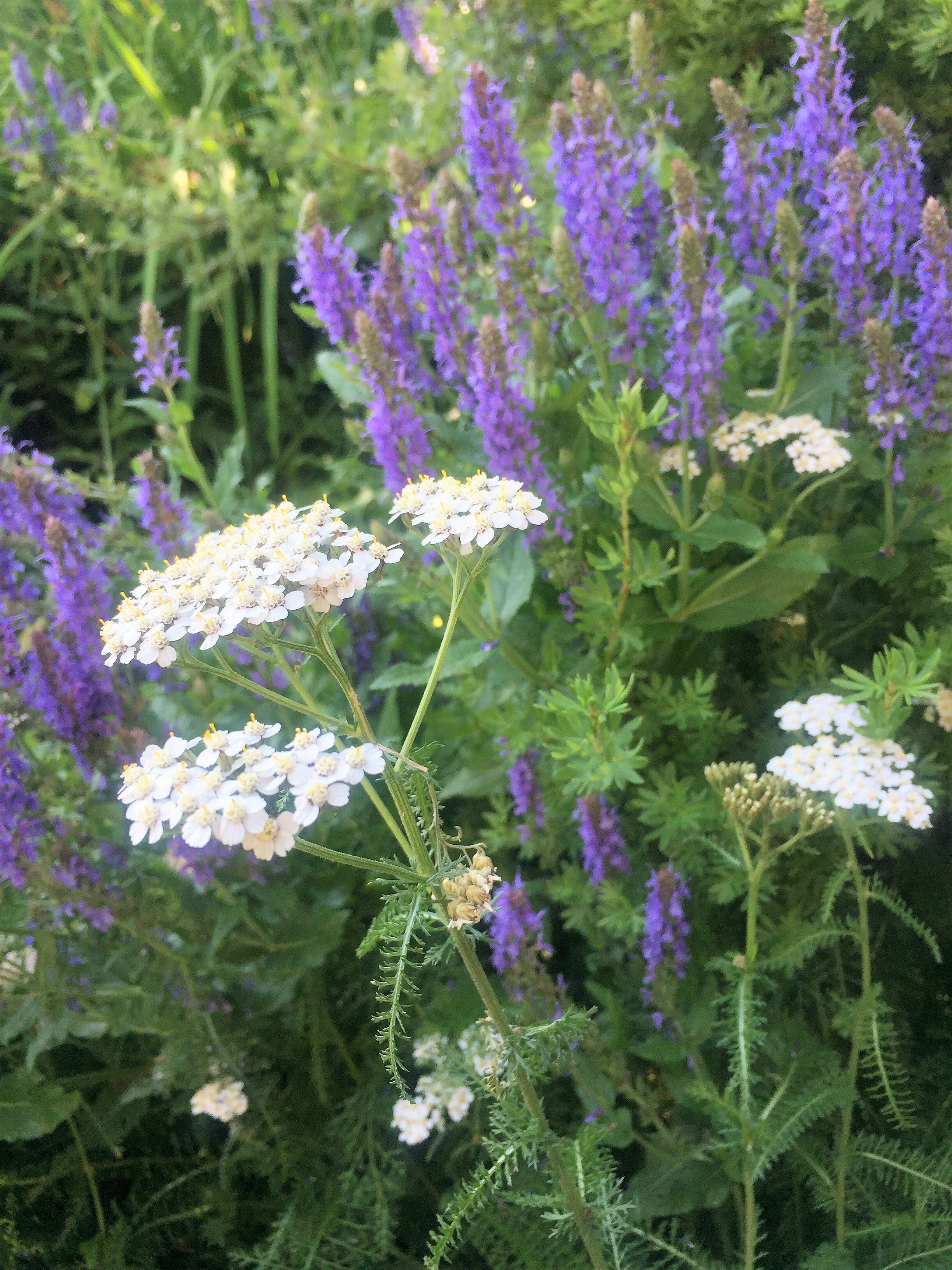 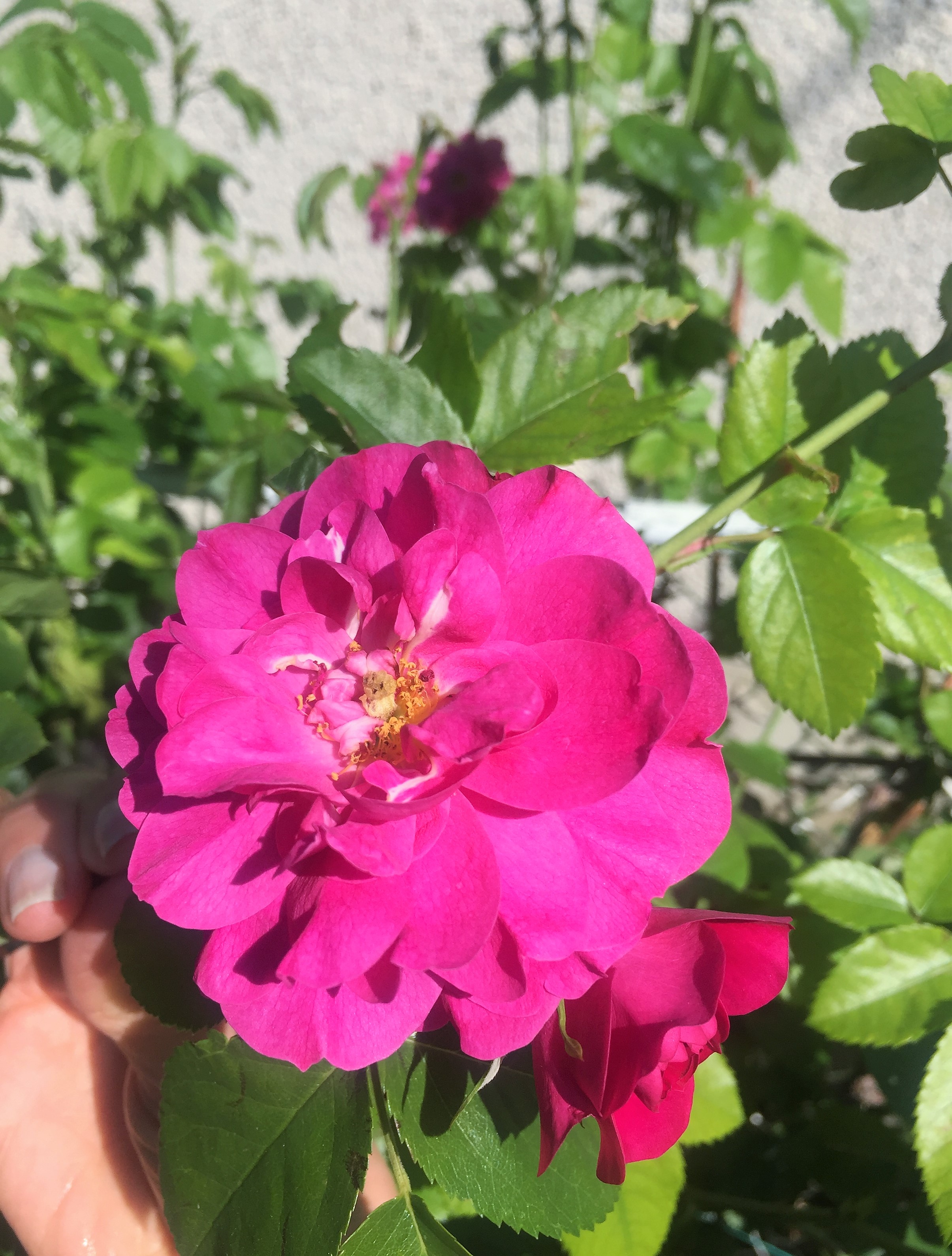 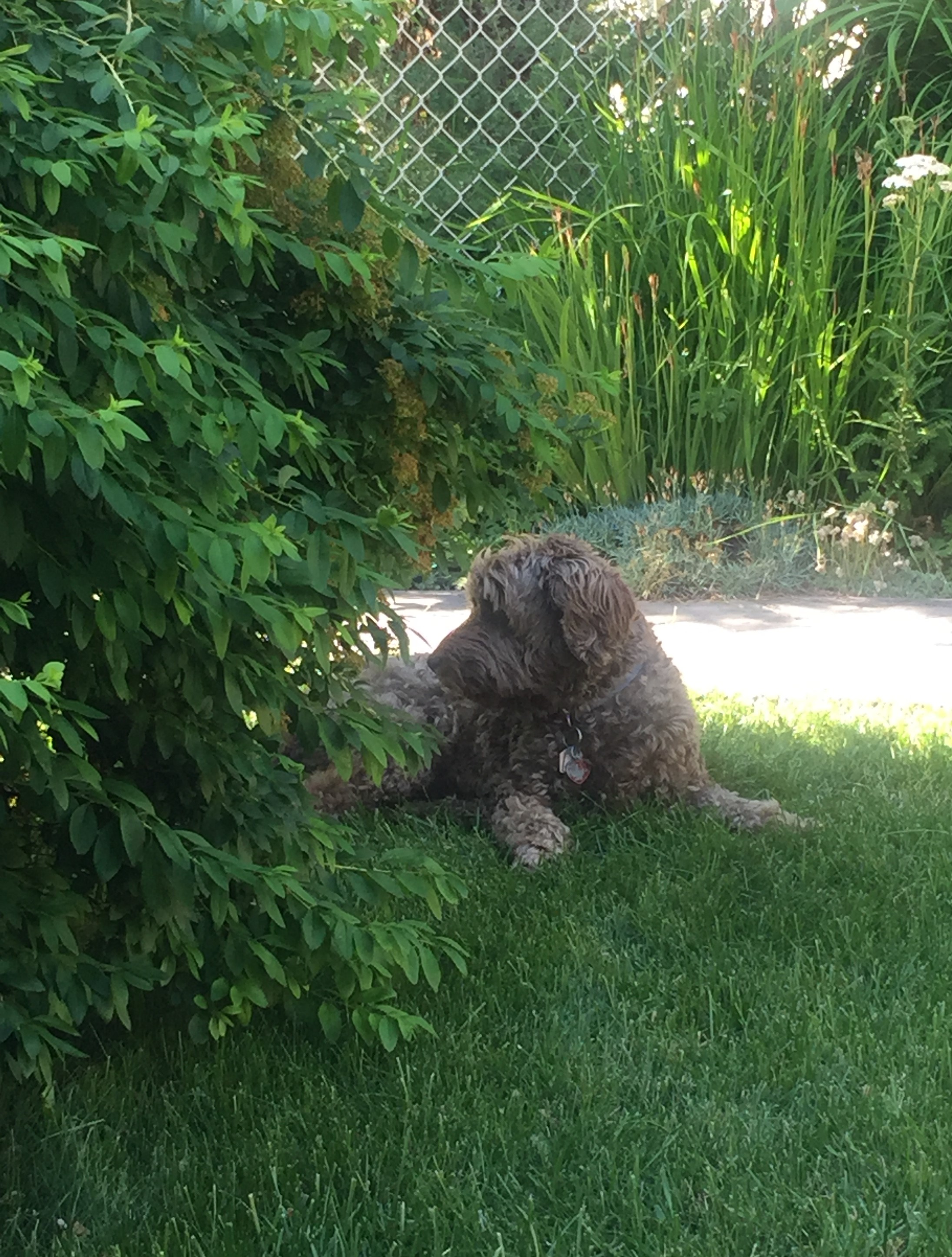 Okay, maybe not as adorable as Barkley, but pretty close.

The Circle of Life

Speaking of birds, this morning I looked out the window to see a number of magpies on my garage roof. This is not an unusual sight, but what was different is that one of them had something in its beak. Something that once was alive that now, presumably, was dead. I think it was probably a baby robin, since I could spy what looked like bird feet sticking out. I recognize that there’s a food chain thing going on here, and no one is lamenting the robins eating worms or what have you, but still. Poor baby.

It reminded me of watching the new Lion King last weekend; I guess the magpie excrement will somehow feed the worms that will feed the robins, or something. It also made me think of a local radio personality who is always proclaiming that she is an animal lover, but also is a meat lover, and well. Circle of life, I guess. No judgement over here; I became nearly hysterical when I realized we have mice in the garage. Or, a mouse. I assume that there are many mice but only one has been spied. My husband assures me they won’t get in the house but what if they doooo.

The Weather Changes Everything

I was so excited by the warm summer weather that I changed my weekly meal plan! I know! I couldn’t believe it either. I have a piece of advice for anyone who is tired of their families not enjoying the meals put on the table: deconstruct everything. It works really well in my household. For example, I made a big batch of pasta salad with sauteed chicken on the side for the guys. Only the pasta is dressed, and then I set out all the vegetables and edamame and everyone can add what they like to the pasta. I make sure to have a little extra dressing to drizzle on top of the extra vegetables.

On that note, I made something totally different on Monday; I am sure I got the original recipe from Suzanne (HI SUZANNE) but I can’t find it now. In any case, as is my wont, I changed the recipe quite a bit to accommodate my family and the things I had in the house. It’s a Thai quinoa salad, and it was a huge hit. I, of course, completely deconstructed it (NO ONIONS FOR ME THANKS) and it turned out well. Here’s what I did:

Pulse a huge amount of broccoli (that’s as exact as I can get) in the food processor until finely diced.

Chop up some red onion and a pepper, grate a few carrots.

Make a dressing: the original one seemed small so I just extrapolated by using 1/4 cup each rice vinegar and Bragg’s soy sauce, 3 tablespoons each lime juice and sesame oil. It seemed tart so I added a tablespoon of brown sugar, and a big clove of minced garlic, along with some grated ginger. It still seemed a bit tart so I splashed a little extra sesame oil in it.

Set everything out, with some peanuts, and let everyone go to town. 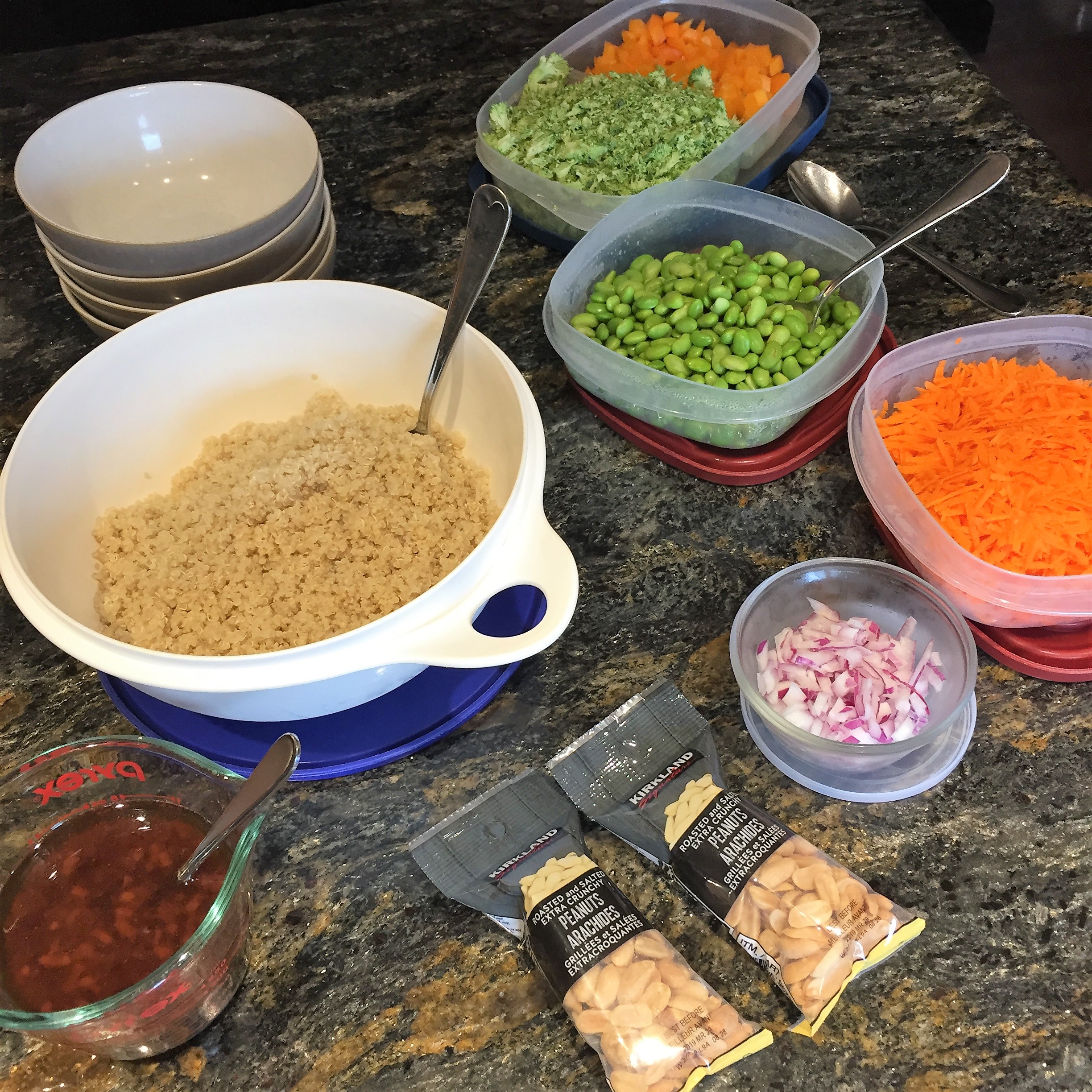 Things That Are Happening

A Welcome-to-High-School newsletter popped in my inbox a couple of days ago; HIGH SCHOOL. I remember how very exciting it was to be in high school, landslide, sunrise, sunset. It’s hit me that really, there aren’t many summers left before the kids are grown and will not have leisure to hang out with me or travel with us as a family and HOO BOY.

I Have Never Felt More Seen

A while ago the boys and I were card shopping for one of their myriad friends’ birthdays. As an aside: I used to dread birthday parties for the simple reason of trying to choose a gift for children I didn’t know well, but what the boys and their friends do is just give each other money. It’s brilliant in my opinion, but it does seem like a zero-sum game as they all seem to pass along the same exact amount for every party. However! I like it.

Anyway, we were in the card store and I happened to come across this, which is an illustration of ME and why I do not even WALK DOWN the chip aisle at the grocery store: 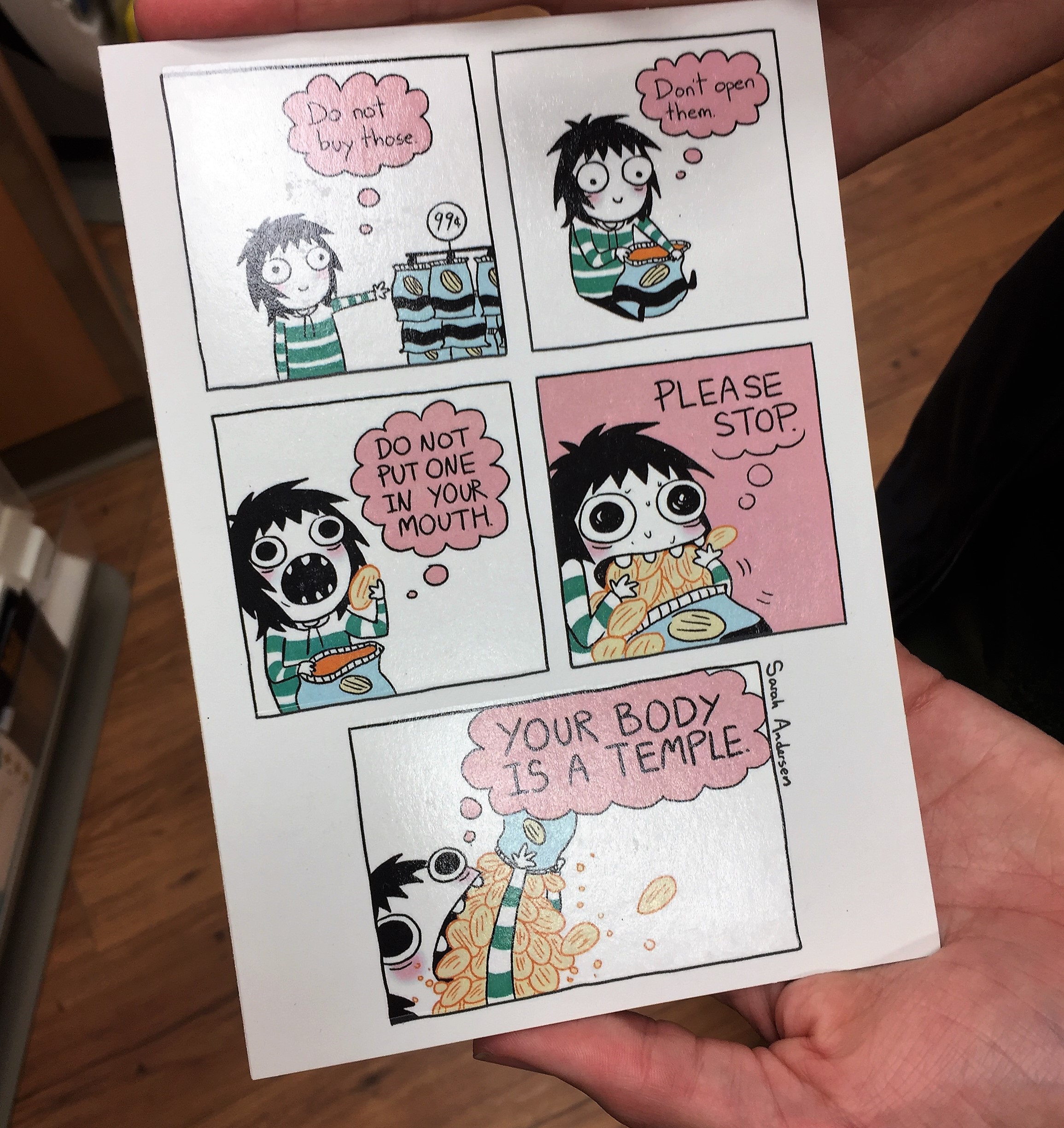 It’s like the card people looked inside my very soul.