Search
Menu
Categories
‹ prev next ›
2
We’re getting the band back together
April 11, 2019 Nicole Boyhouse Kondo-ing my life

It’s official: I am in Full Spring Cleaning Mode. This includes the yard, the basement, and every closet in the house. Nothing is safe! Everything must go! Or at least everything must be in use or spark joy. About three years ago I did a full Kondo of my house – some of you may remember that – and that, along with my One Year Shopping Challenge, really changed the way I brought things into the house. I am much more mindful about purchases and I ensure that if I am buying something, it is very much needed and/ or wanted.

Still, things add up. Children outgrow their beds rendering many sets of twin sheets unnecessary, books and toys also get outgrown, clothes don’t fit or become too worn to be desirable anymore. I have a pair of platform slides that date back to the Nineties that I was keeping in my closet “just in case” but really, I think the Platform Slide Ship has sailed.

Part of my cleaning frenzy has been spurred by the soon-to-be acquisition of an item that requires a certain amount of space: a drum set. As a long-time pianist, I have been anxiously awaiting the day that my children would show interest in learning a musical instrument. In your face, Nicole, as one would say. So we now have a new drummer, along with a new electric guitar player. Could you please turn down the amp, can you hear me, please turn down the amp. In all seriousness I am actually thrilled at their interest; along with my younger son taking up drums and my older son taking up electric guitar, my husband has taken up the bass, and things have become much more musical around here. Loudly musical.

My son’s drum teacher informed him, much to my relief about hearing concerns, that earplugs must be worn at all times when drumming, so I assume that means I should probably have a set as well, since there is no door to the basement and our house reverberates with any noise from the basement. I have not yet met the drum teacher, but my husband says that he is exactly what you might expect a drum teacher to be like. I imagine him as a more modern Garth Algar.

That reminds me: our resort in Puerto Vallarta was Now Amber, and on the card key it said “Live in the Now” which made me think of the scene in Wayne’s World where Wayne is obsessed with an expensive guitar, and Garth says, Stop torturing yourself, man, you’ll never afford it! Live in the now! Every time I looked at the card key, I would hear that voice, even though I have not seen that movie since probably 1993.

LIVE IN THE NOW.

Great advice from a fictional character. Gardening and yard work is awesome for living in the now; it’s hard to multitask when you’re covered in dirt and physically active. Last week I was cleaning one of my most labour-intensive perennial beds when I discovered this little guy: 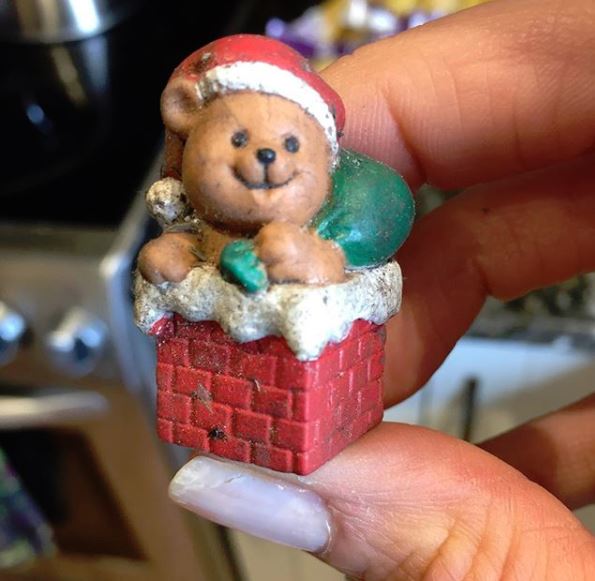 He was hidden under the silvermound plant. How did he get there? Where did he come from? No one knows. No one has seen him before or has any idea how he came into our yard. It’s a mystery and likely one to remain unsolved.

On the weekend my husband and I cleaned out the gutters; a very gross but extremely satisfying job. It’s disgustingly fascinating, the way I imagine a colonic might be. OMG look at what’s coming out of there! I shrieked to my husband as I kept guard of the exit end of the gutter, as he maneuvered the hose, trying to locate the clog.

Speaking of the unspeakable, last week I had my annual physical. Don’t forget I need the large speculum! I cheerfully reminded the doctor, just in case it wasn’t on his chart. Also my cervix is tilted and really hard to find. Ah, the feminine mystique.

My physical was initially booked for a day in March, but several days prior a conflict came up. I called the office immediately and left a message; it was after hours but I wanted to get the phone call out of the way. The ball is in your court now, doctor’s strange assistant. Remember the assistant/ nurse who mistakenly booked my appointment at the wrong time, and then gave me the gears for not being at the appointment? I wanted to avoid another such confrontation. So I left a message and she later called me back and re-booked the appointment. No problem. I repeated the new date and time several times during our phone call; So that’s 2:00 on the 4th, okay. Perfect. Let me just write this down. 2:00. On April 4. 2:00. Great. April 4. All fine, full speed ahead. Then, a day later, I got one of those text reminders for the OLD appointment, the one in March, the type of reminder that allows you to type C for Confirm or 9 to cancel. I hit 9 on my phone and got the message to call the office to re-book. Well, I had already re-booked, so I just went about my day. This was, let me stress, still in March, and still before my old appointment.

By now you may imagine ominous foreshadowing music playing.

The day of my appointment (April 4!) I was in the middle of doing my hair when my phone rang; it was the doctor’s assistant, saying that she saw that I needed to re-book my appointment and TYPICALLY they ask for more than 24 hours notice and that there might be a fee involved…I interrupted her by saying I did NOT need to re-book and that I would see her today, April 4, at 2:00. Well, she said sharply, You typed 9 on your phone to cancel the appointment. I explained that I a) typed 9 over a month ago, and b) I did not even get a confirmation text for this booking. You did, you typed 9, I can see that this was sent, when was this sent…then she paused. Well, it doesn’t matter. See you this afternoon.

IN YOUR FACE! I did not say, but thought. See you this afternoon AT TWO O’CLOCK! I said instead, in what I hoped was a friendly and polite voice. I wondered if things would be awkward when I saw her that afternoon (the 4th! At 2:00!) but there was, happily, another nurse there who dealt with me, a very perky and cheerful young woman. After weighing, measuring, and doing my blood pressure, she asked if I still get my period. Lady, I’m 43. Things may be crazy in that department but I’m not in full-on menopause yet. Isn’t it interesting how we suddenly go from getting the question When was your last menstrual period and Is it possible you might be pregnant to Do you even GET your menstrual period anymore, you old crone?

Well, the best part of this story is that I appear to be in good health, albeit three pounds heavier than at my last check-up. I BLAME MEXICO AND ALL THE DELICIOUSNESS THEREIN. My doctor was highly unconcerned and dismissive about the three pounds, thankfully, saying, Three pounds is just a bowel movement away from where you were last year. Well, possibly, but it’s more likely that six margaritas a day added up in the calorie department. Oh well, that’s what holidays are for, am I right? On that note, it’s time for my green smoothie. xo

The Music of the Night