My husband, with no effort whatsoever, lost four pounds over the Christmas holidays. I feel I could close out this post without saying anything else. It’s like one of those one-line stories; an entire story captured in just a sentence. Men, am I right? But the real issue here is that our household is apparently a zero-sum game as I gained that same amount over that same time period. One cannot expect two weeks of unbridled culinary hedonism without some consequences, however, sometimes I wonder what it would be like to be a man.

Add that to the fact that, while shopping for protein powder, the salesman asked if I was fifty-plus. On the one hand, there are many whose lives were cut short, who would love to be fifty-plus. Life is a gift, every damn day is a gift, we must celebrate each year that we are on this planet. On the other hand, I’m forty-four.

In his possible defense, I was at the end of my hair colour cycle and with each passing month the contrast between my now-almost-white roots and the rest of my hair is more and more pronounced. See? 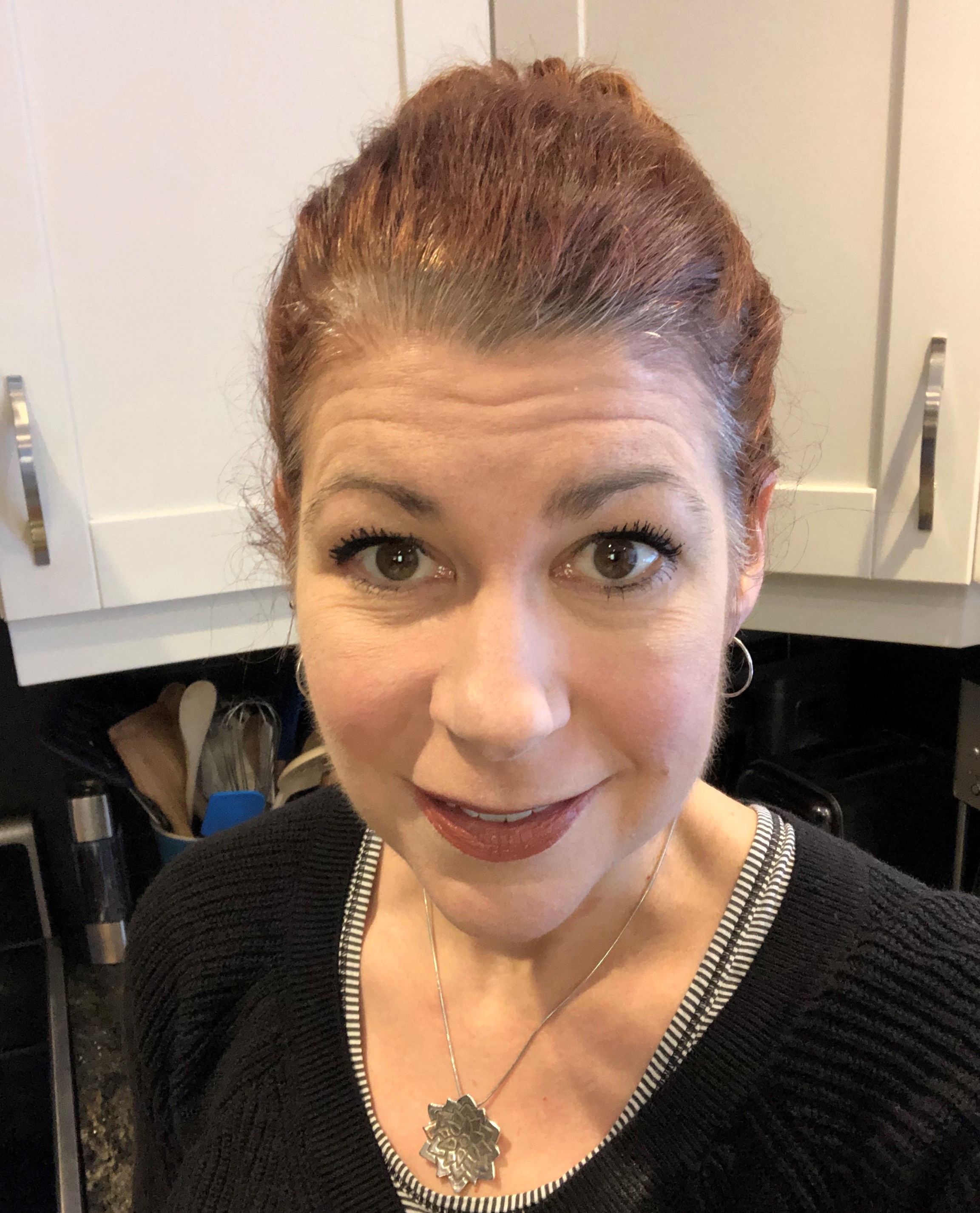 It’s even more pronounced because today my hair appointment got rescheduled to Friday; I was torn between feeling, well, GREY, and also feeling excitement at having a couple of unexpectedly unscheduled hours. Unfortunately, a lot of that happily unexpected free time ended up getting consumed by the discovery that our scanners have mysteriously stopped working, right in the middle of my paperwork for insurance renewal.

As it is, I spent the first part of Monday morning at the orthodontist’s office, where I thought we were going to be able to book the braces-coming-off appointment but were instead told that it could be a few more months. It felt, very much, like a January piece of news. I had been holding off booking a dental cleaning for my son with the thought that he would be braces-free very soon, but alas. After the orthodontist I spent a solid 45 minutes on the phone booking various dentist and doctor appointments for both boys, trying to juggle my own schedule with their schedule with the doctor/ dentist schedule, and let me tell you, after that I thought a little bit about day-drinking. Only a little bit though. It was like my old linear programming days, where if you added too many parameters and restrictions prior to solving for x, you would end up with no feasible solution.

Back in those days, the computer programs took forever to run, and it would feel so disheartening to do so much work and wait so long – the computer would often time out or die while calculating – to get the response no feasible solution. The first full week of January feels similar, not to mention that the really cold weather has arrived. The weekend lows are in the minus 30s and the highs in the minus 20s; just going out to get groceries or to take the kids to school feels like an epic feat of strength. I’m living in my legwarmers and layers, and it takes a great deal of willpower to get undressed and then into the shower, and then great willpower to get OUT of the shower, and even more willpower to just put clothes on afterwards. That’s a lot of mental energy and willpower, considering that doesn’t take into account leaving the house.

I am trying not to be too bitchy about the cold weather; this is where I live, cold weather is part of life, let’s just move on. However, my Raynaud’s is in full-blown weirdness; I was driving home from class – with gloves on, of course – and by the time I got home this is what my left hand looked like. 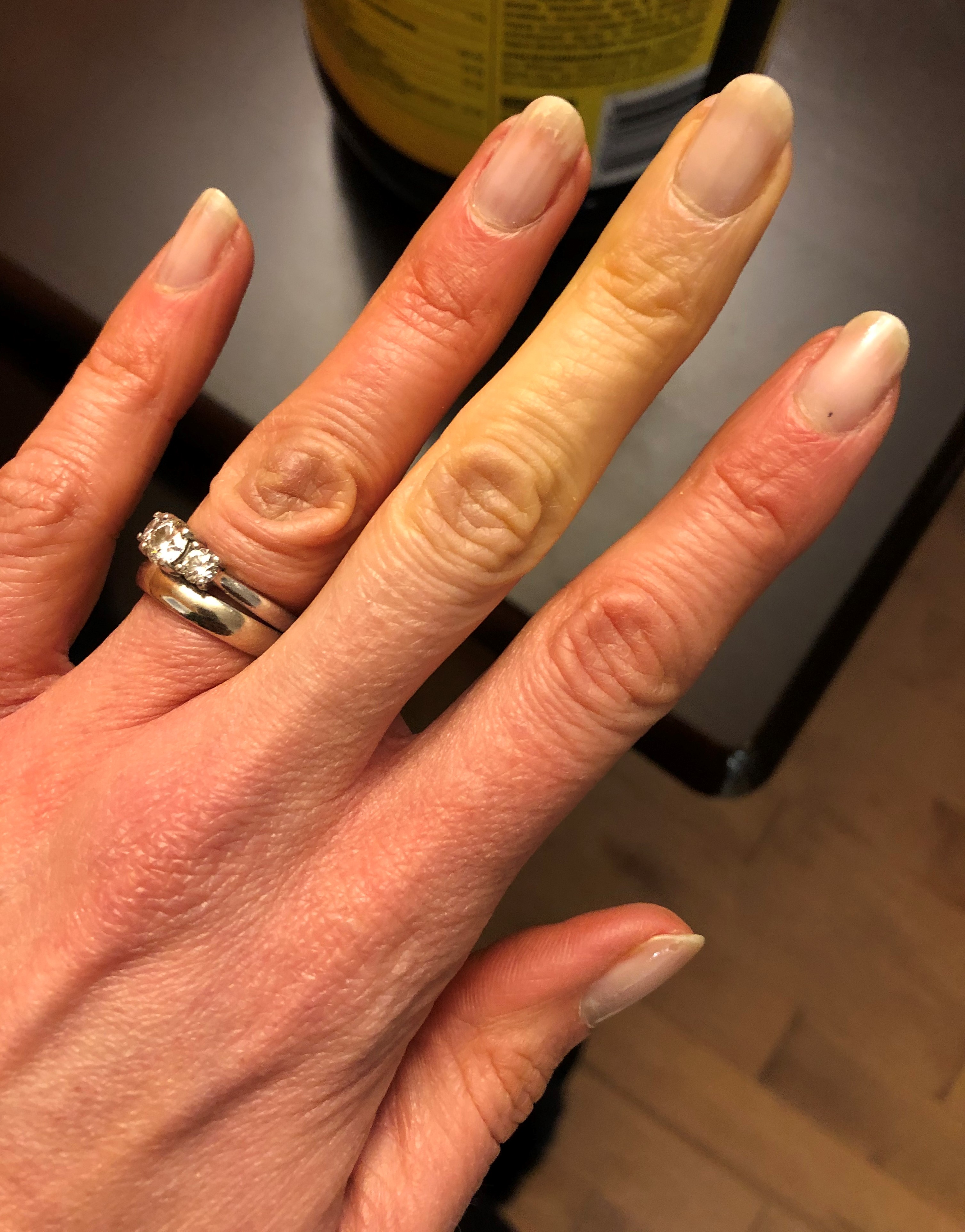 That finger still hurts, and it brings to mind what my doctor said, that the only real cure for this is to live in a warmer climate. Maui? Where my fellow Renaud’s sufferers at?

Well. There are many lovely things about January. Be present, cherish the moment, I chant to myself, over and over like I’m institutionalized a la One Flew Over The Cuckoo’s Nest. Not out loud, though. Speaking of this, something I really dislike about our society today is the ubiquitous Bluetooth. I cannot even begin to count the number of times I have heard someone speaking, and, thinking they were addressing me, I turn to answer only to discover they are talking on their Bluetooth. It startles me EVERY TIME. I was mentioning this to one of my seniors and he said that he has a different perspective. When he hears someone ostensibly talking on Bluetooth, he avoids eye contact in a stay away from the crazy person kind of way. I mean, I probably shouldn’t judge as I am a person who sings out loud in the grocery store. Perhaps that’s why people avoid eye contact with me? Just kidding, I have yet to notice people avoiding my gaze as I ask them random questions as regards the items in their cart/ how old their baby is/ have they ever tried this before?

SPEAKING of that, I have been meaning to mention these “kalettes” I found at Costco a few months ago. 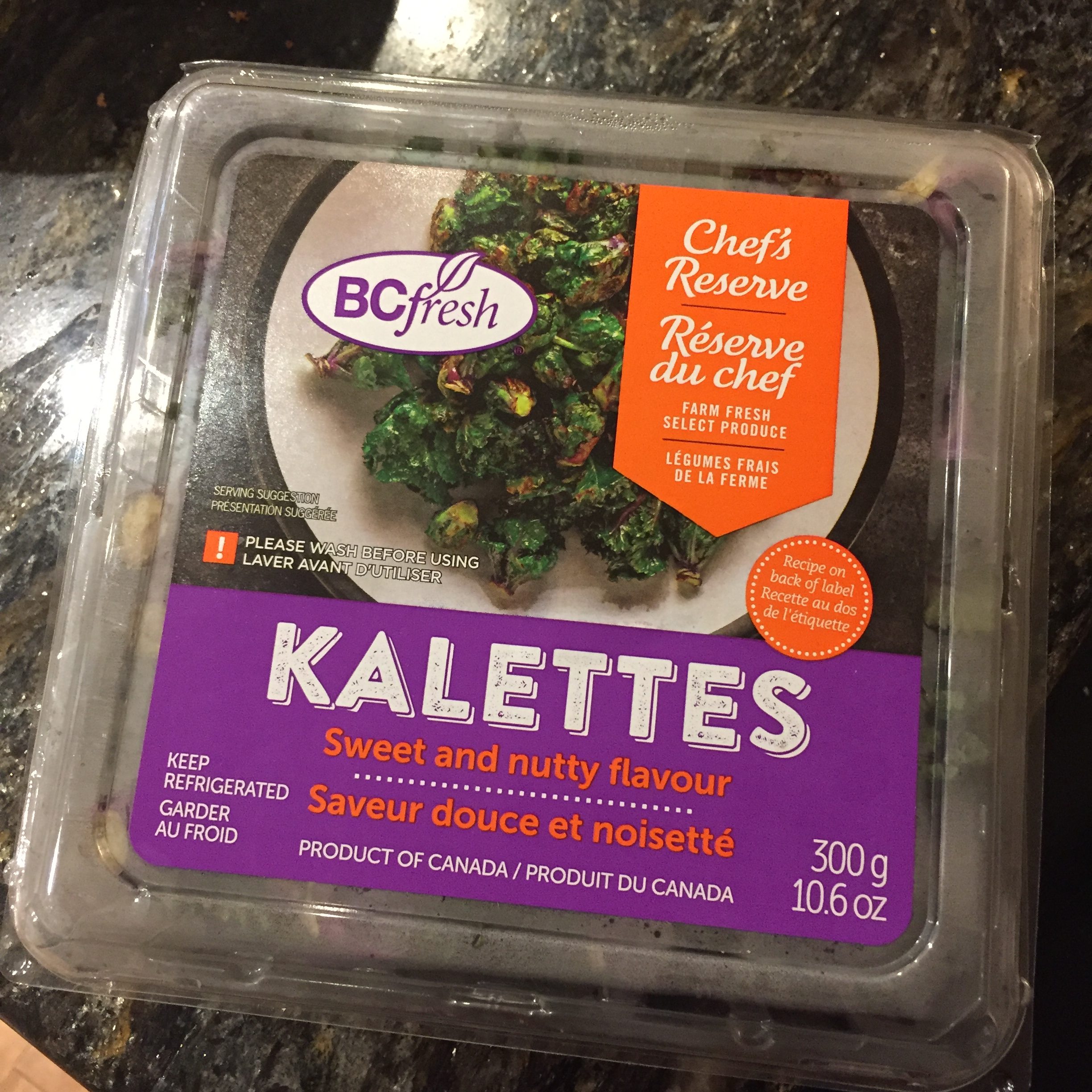 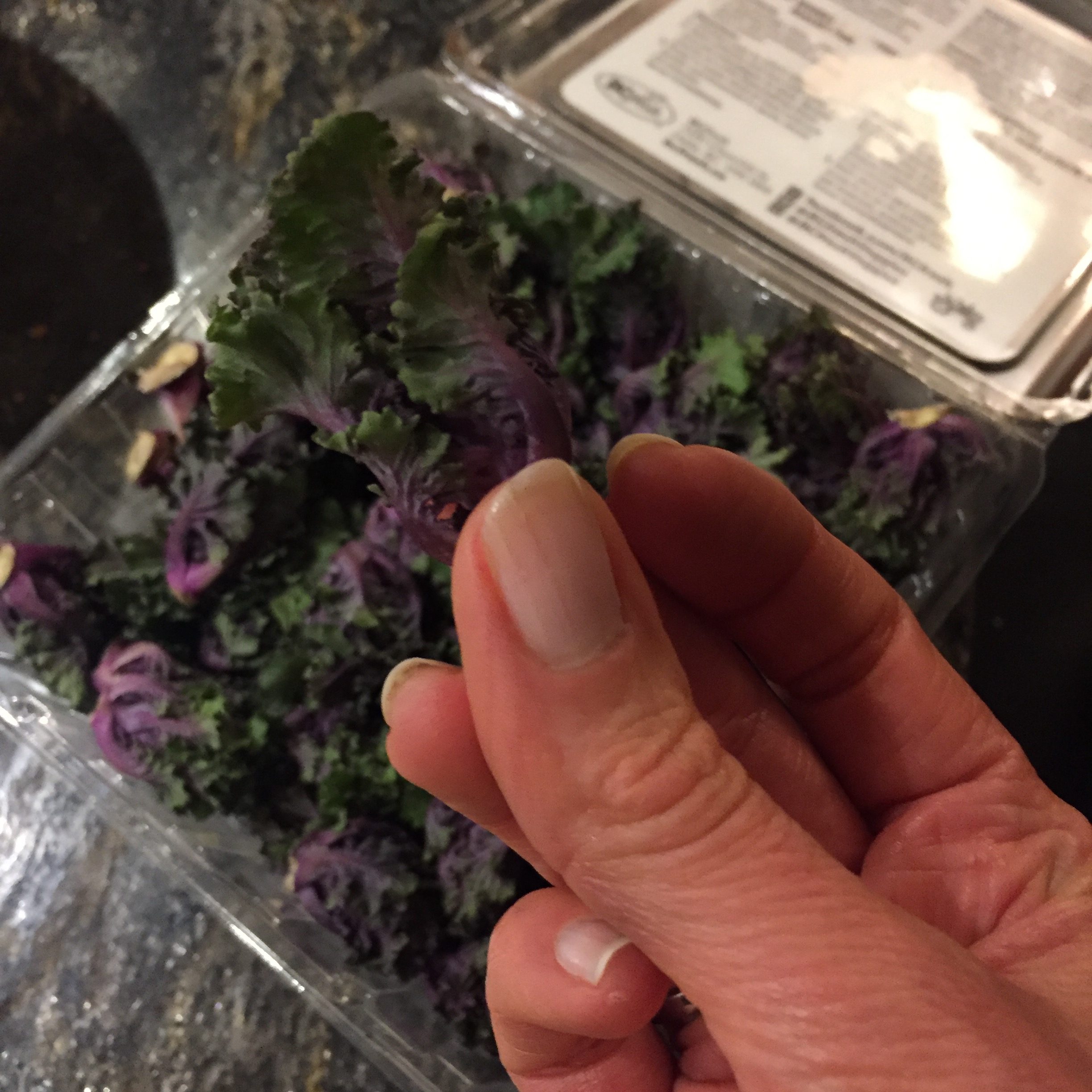 There were several of us women milling around the display in the giant refrigerator, all of us asking each other if anyone had tried them? And if they were good? No one had so I volunteered as tribute and grabbed a package. Later, in the lineup, a woman asked me about it. Well, for all of you wondering, THESE ARE DELICIOUS. I have bought them every time I have been to Costco ever since; they are glorious roasted with olive oil and balsamic. I’ve also made them with nutritional yeast, which was also good. 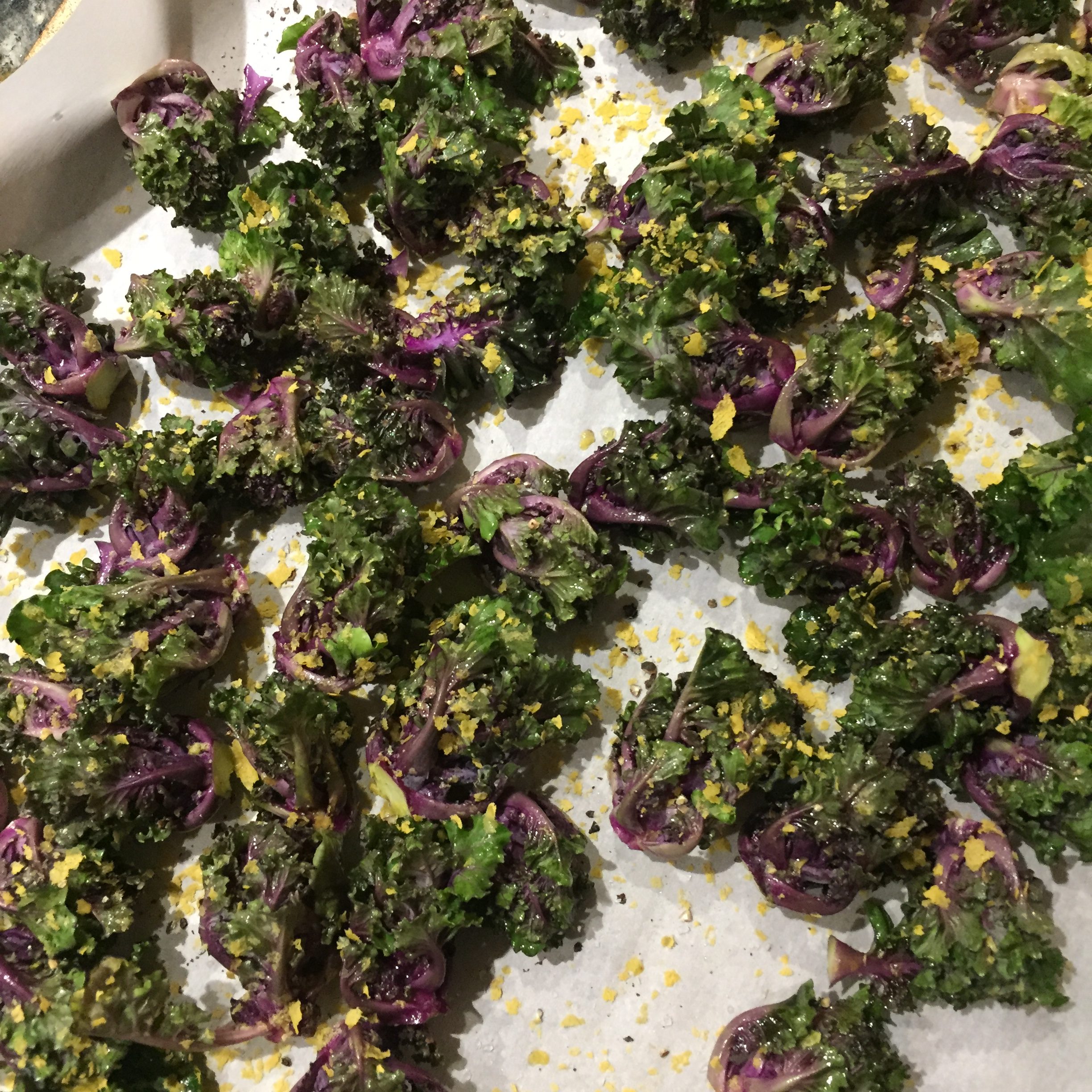 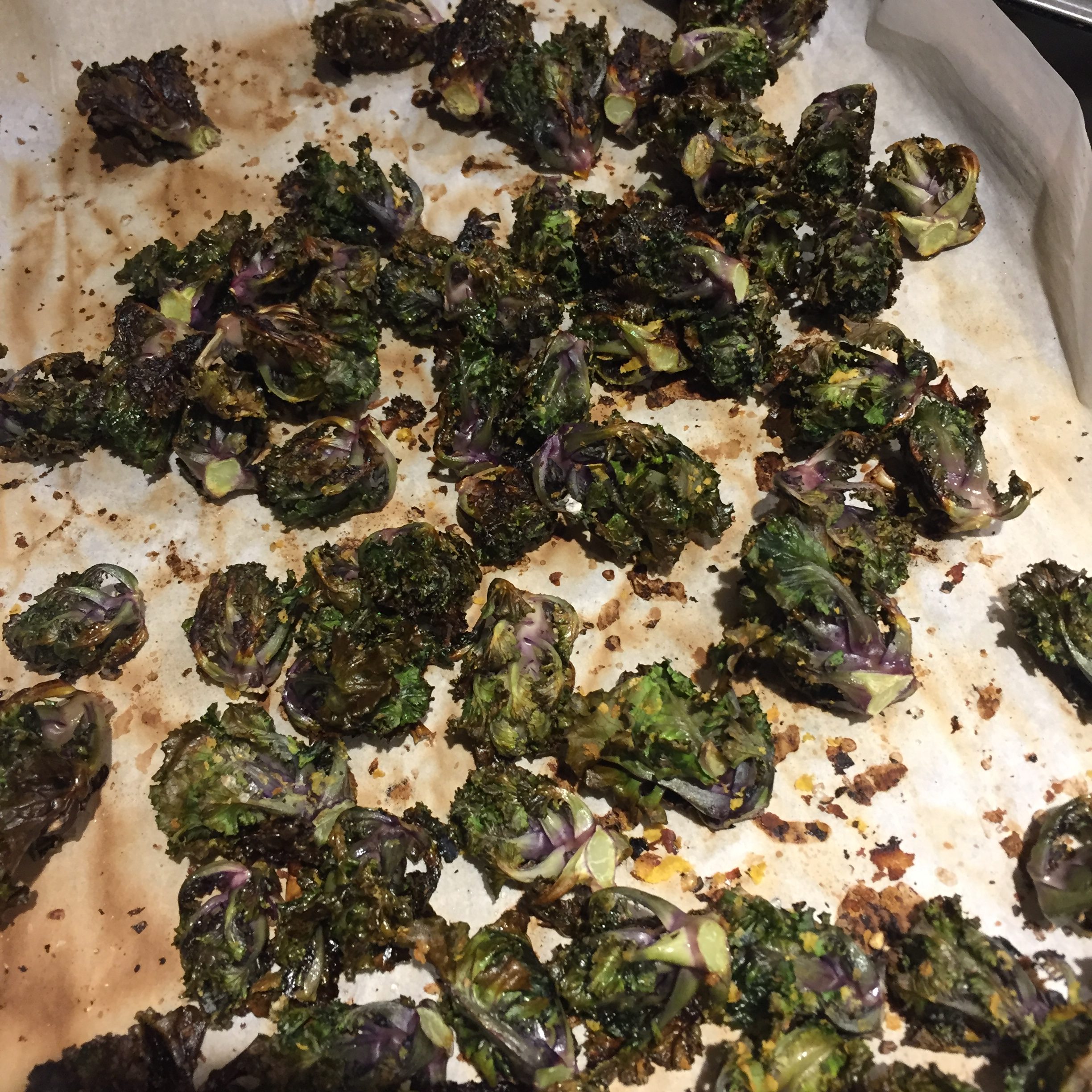 They don’t LOOK that appetizing, but believe me. BELIEVE ME THEY ARE DELICIOUS.

Circling back slightly to Things That Startle Me Constantly, there is a sign in my neighbourhood for a fitness centre that offers Gentle Fitness. The only thing is, Gentle is misspelled; the sign actually reads Gental Fitness. Every Single Time I drive past it, I am startled anew at the idea of Genital Fitness. I mean, what is that? Kegels? Pelvic Floor Exercises? Something Else I Am Not Aware Of And Probably Don’t Want To Be? All that goes through my head within a second, and then I remember, oh. They mean GENTLE.