Time just flies by, doesn’t it? Next week is Halloween already, and then we are into the Christmas season! I know many of you think that November 1 is too early to start thinking of Christmas, but in this world I think we should all just take joy where we can find it, and meanwhile, I’m already halfway done my Christmas shopping. I should definitely be done before the first week of November is over, at which time I can start making lists about cards and baking and various elfing duties. I was at Costco this week – when AREN’T I in Costco, really? – and I picked up a pre-built gingerbread house and two Advent calendars. If there is one thing I’ve learned about Costco over the years, it’s that if you see something seasonal that you think you might want, you should carpe the hell out of the diem and buy it, because there is no guarantee that it will be there next time. 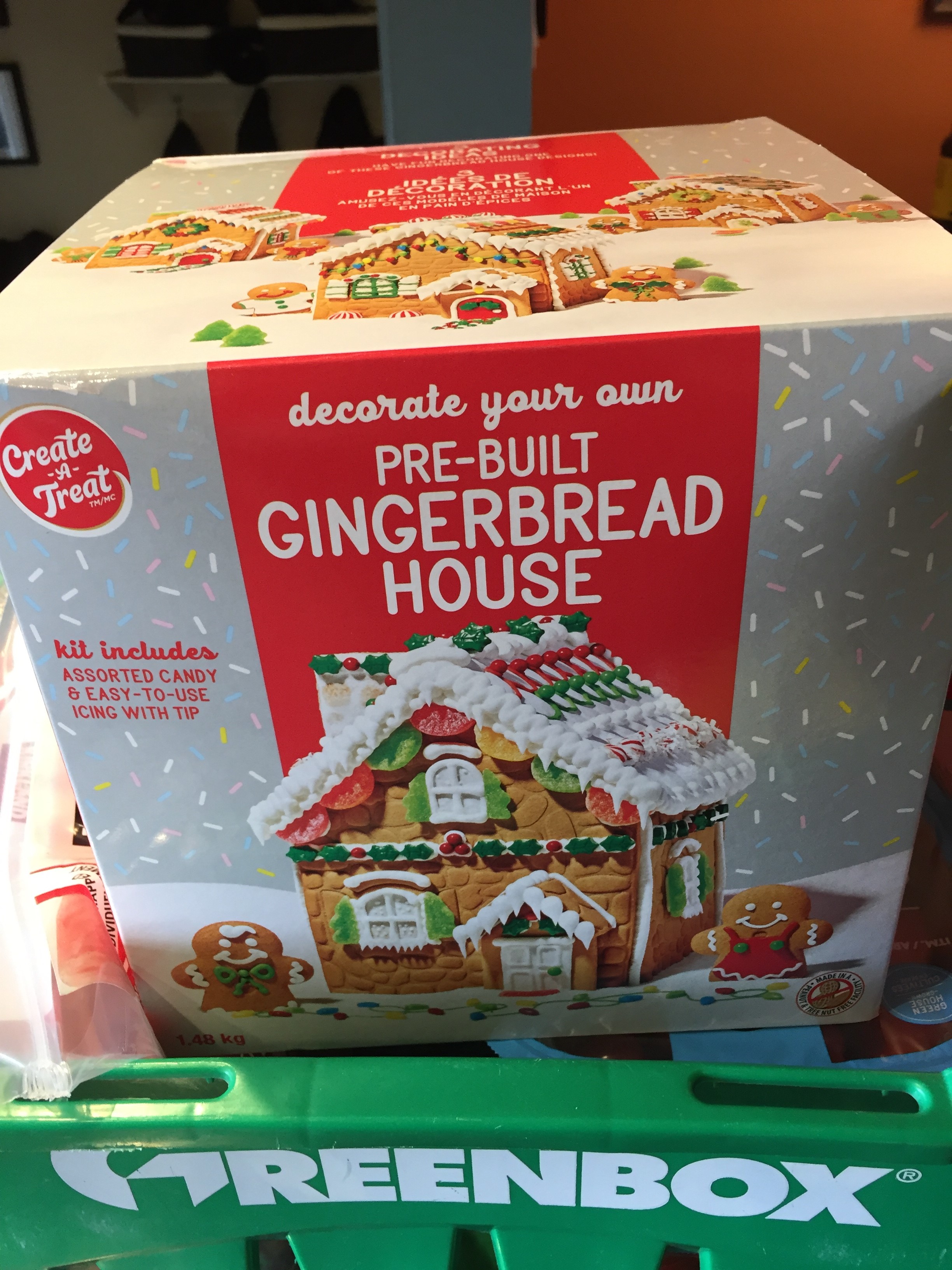 There are no guarantees in life, are there? Shopping at Costco feels like a metaphor for life, sometimes: carpe diem, be patient in the lineup, and be a good person by taking your damn cart back to the corral. Also, you will never regret buying the strawberries, they are always delicious.

Speaking of Costco, they were selling packages of 18 full-size chocolate bars, and I seized the day and bought them, despite having already purchased 240 fun-sized chocolate bars. I have always wanted to be the fancy rich lady giving out full-size chocolate bars on Halloween, and now I will have realized this dream. The only thing is that 18 far exceeds the actual number of trick-or-treaters that we have ever had in the past, not to mention 240, but hope springs eternal. I have some pumpkin-themed bags to package up the extra treats, and who knows? I entered our address in the community association’s map of the neighbourhood’s “Spookiest Houses,” so perhaps we will have a run on treats. I hope. Even though my kids are not – for the first time ever – trick-or-treating, my mom had dropped off a box of 50 fun-sized chocolate bars for them, plus 120 Rockets for me. In other words, if we don’t get a lot of costumed kids on the 31st, we are going to have a great deal of candy in the house.

Well, what else is new. My kids have often had leftover Halloween candy sailing into Easter, so it will likely be no different this year, given our stock.

After my Costco trip I went into Michael’s, which is not something I do often. I am not a crafty person, and I find myself to have the same reaction in Michael’s as I do in Bed Bath and Beyond – a feeling of being completely overwhelmed and also inadequate. What is it about that store? So many people who are bustling around getting their yarn and their craft supplies and their really interesting things that I have no idea what to do with, and then there’s me, standing like a deer in headlights as women – they are all women – swoop around to get their melting wafers and acrylic paints.

Anyway, I went in there to buy those little tiny Chinese take-out boxes, to put treats in for a yoga event I’m hosting on the weekend, and I did obtain them. However, for whatever reason Michael’s also had 50-70% off all Halloween and fall decorations and, although our house is super-spooky as-is, I felt like, as with many but not all things in life, more is better. After all, I’m trying to get us on the literal map. Therefore, in addition to our bats and ghouls, animatronic skeleton dogs and tarantulas, graveyard and skulls, and our pair of 17-foot reapers, we now have a 5-foot ghost who looks like it’s going to climb up our house, a crazy skeleton ghoul to add to the trees, and, as a show of deep maternal affection, a scary skeleton clown. 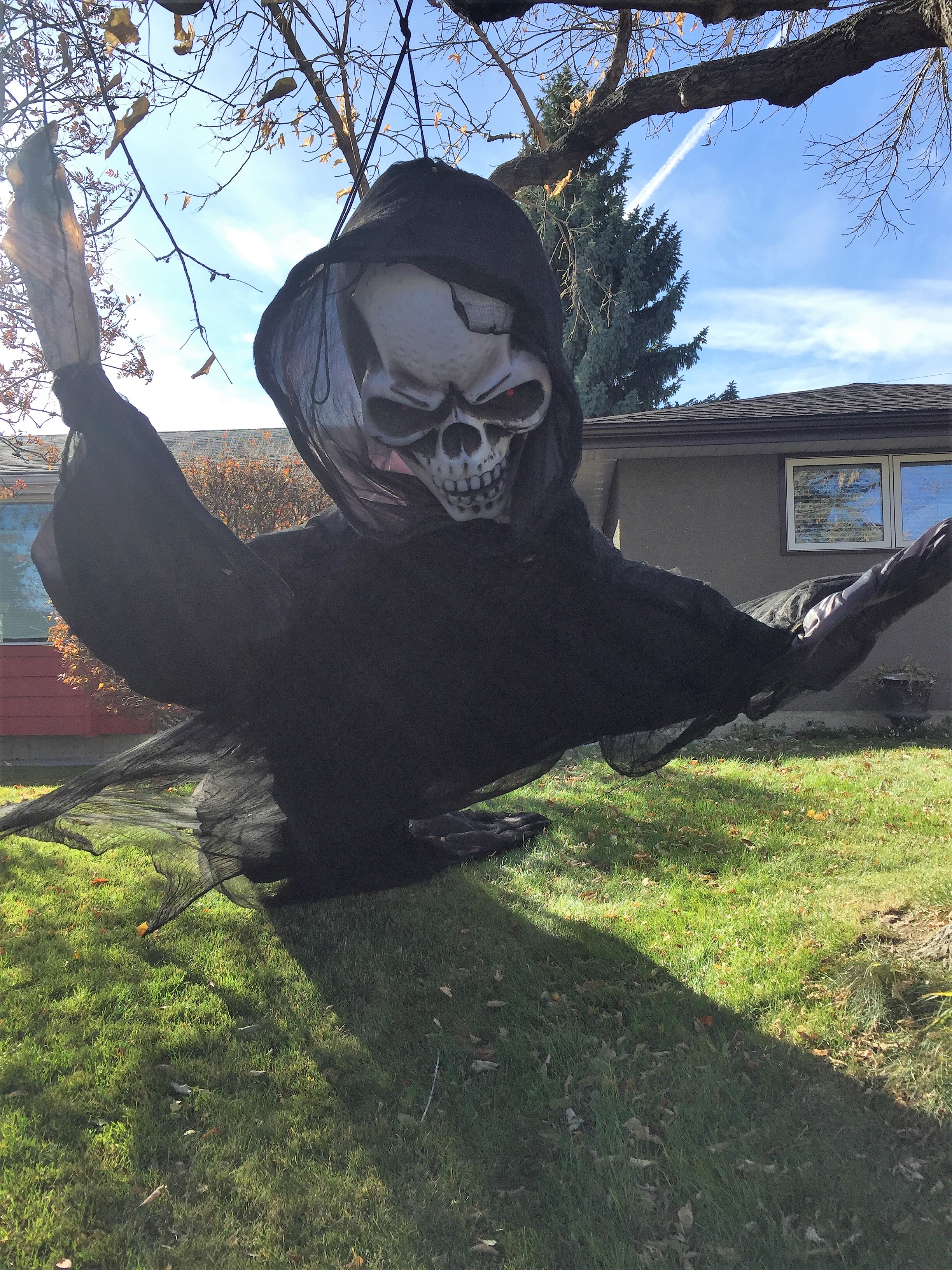 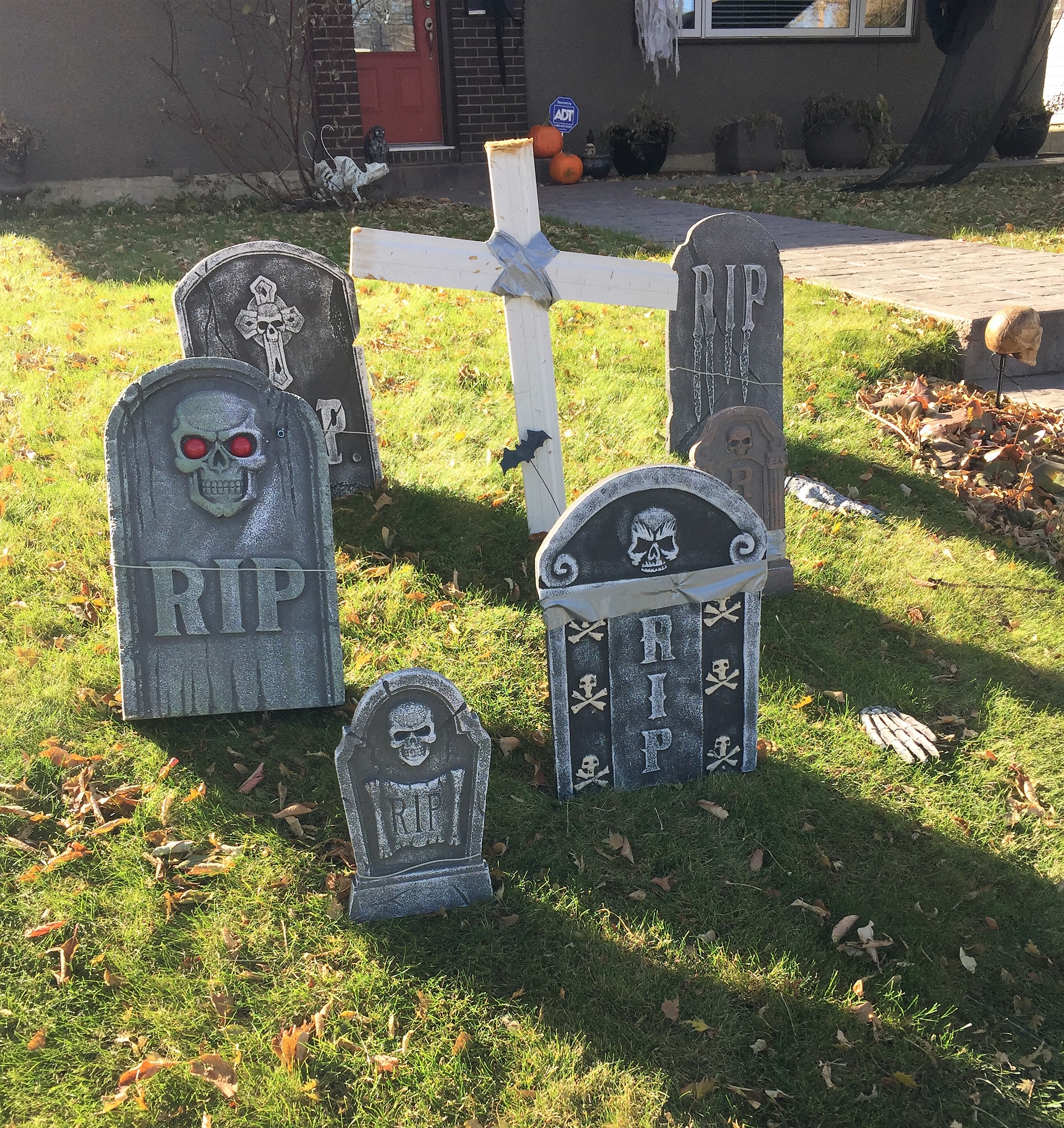 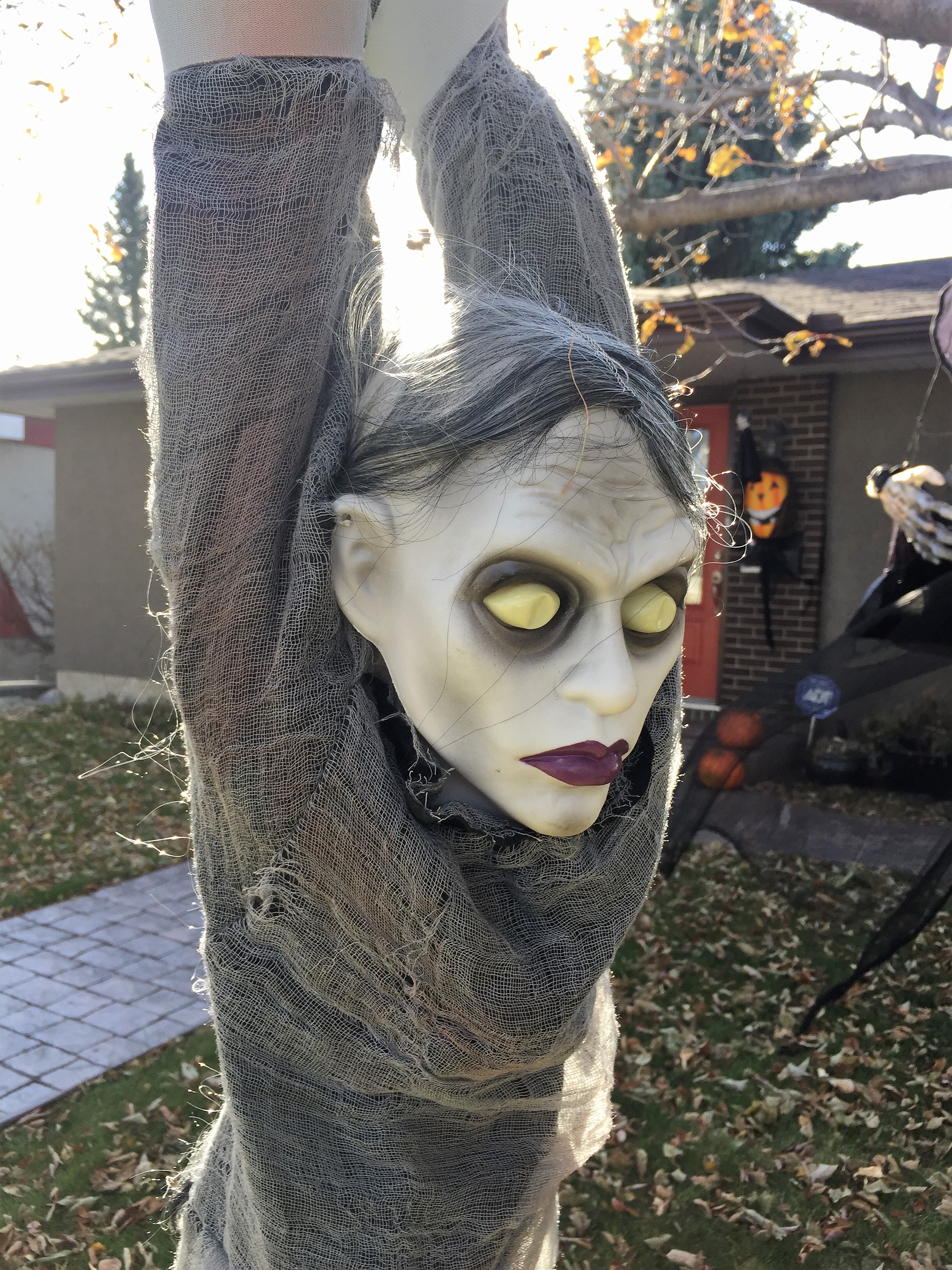 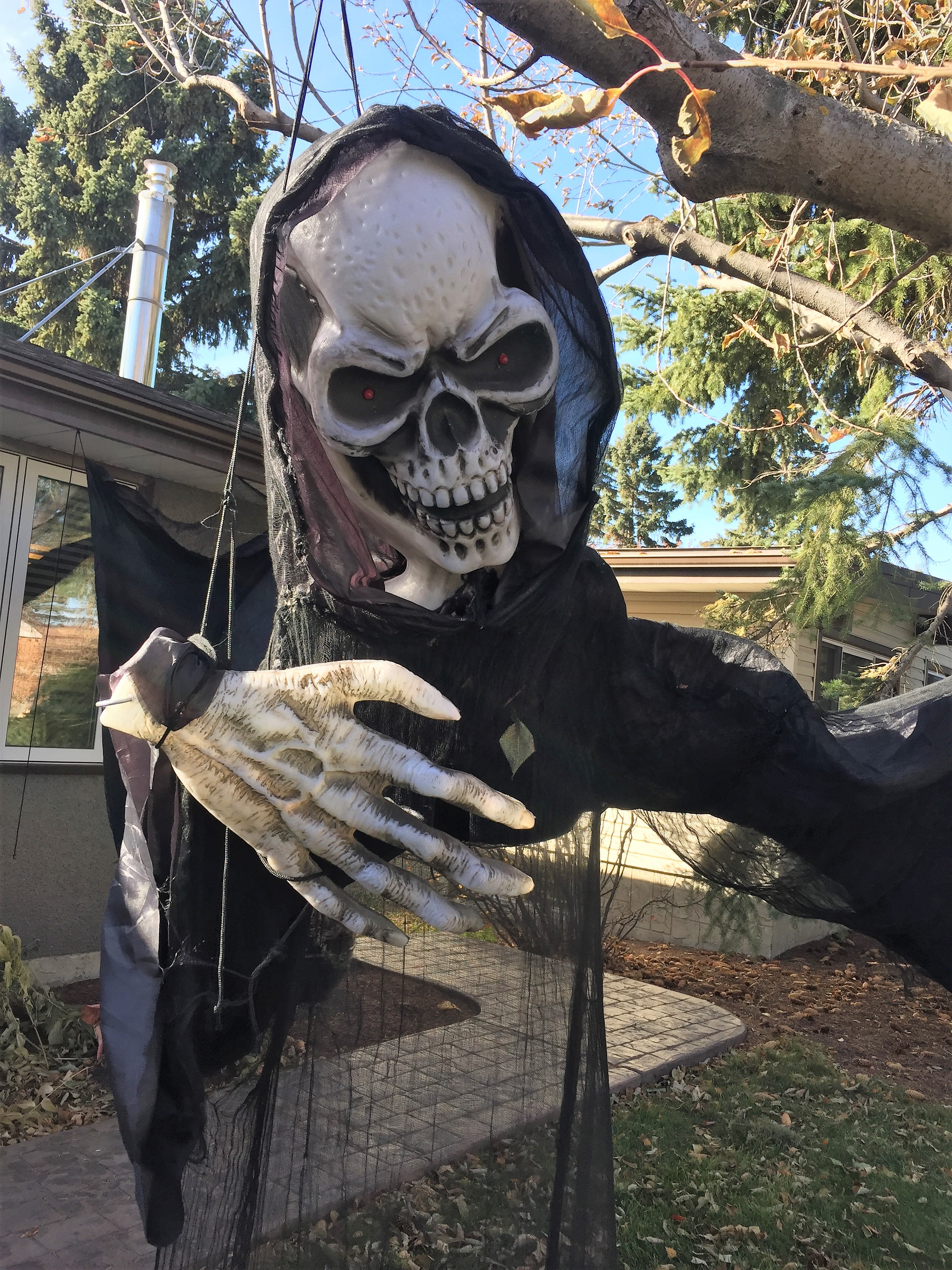 I LOATHE clowns, but the boys think that IT – both versions – is “hilariously funny” and they were so thrilled with the acquisition that it made up, somewhat, for my extreme distaste. Look at the sacrifices I make for you people. It’s crazy enough to me that they thought The Shining was a comedy of epic proportions, but the IT quotes come several times per day. If I have to hear “Pardon me, but do you have Prince Albert in a can? Well, you better let the poor guy out!” ONE MORE TIME, well. I don’t know what I’ll do. Probably nothing. I did manage to put a stop to them crazy clown-dancing around me, but there’s no stopping the Prince Albert In A Can joke. 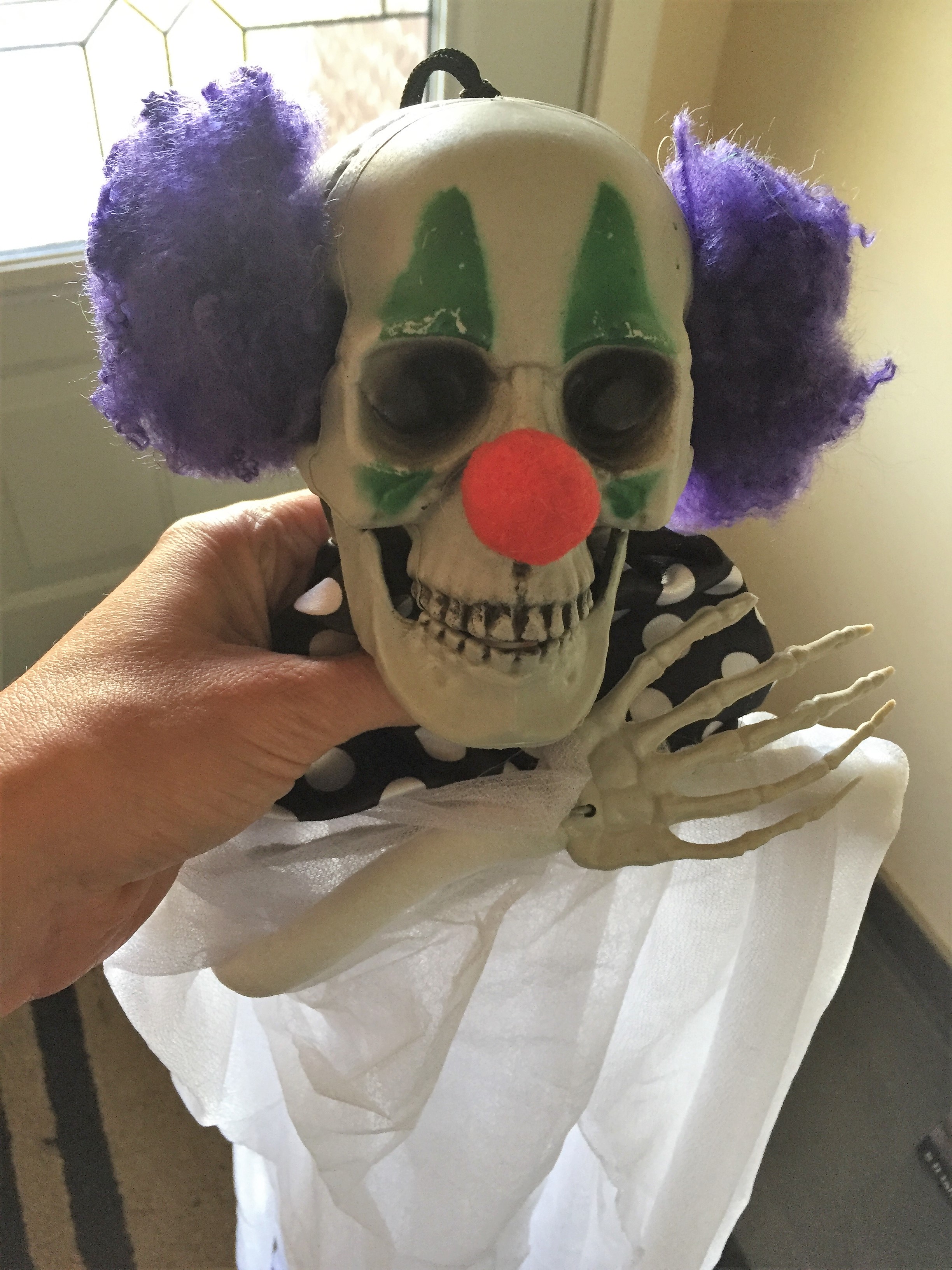 GAH. That thing is awful.

Well, it’s almost the weekend and in addition to my yoga event I have many dozen Halloween cookies to be made. When the kids were little, I’d send enough for their classes, as well as contribute to the inevitable bake sale. These days their friends still love those cookies (“These are the greatest cookies EVER, Nicole”) so I make enough for the boys to share with their buddies. Wow. We are going to have a LOT of sugar in this house. All hail Halloween! xo