Last week I was startled to learn that Johnny Rotten is not only still alive, but he just turned 63. I grouped him in with aging rockers who have defied all odds by living past the Eighties, such as Billy Idol and, of course, Keith Richards. I was talking to a friend about this (HI TARYN), and she told me that Johnny Rotten is actually a person on the straight and narrow, which I did NOT know. I guess this is a cautionary tale for anyone jumping to conclusions about people based on their occupation, appearance, and, possibly, the company they keep. On further investigation, I discovered that Johnny Rotten tried heroin one time and then quit after it made him throw up, and also he was predisposed to not use based on the cautionary tale that is Sid Vicious. In addition, he got his stage name due to his total lack of oral hygiene, which led to rotting teeth which he had completely replaced in the early 2000s, not just because of vanity, but because the dental rot was affecting his health.

On that note, I have a dental cleaning tomorrow! I am “looking forward” to it as much as I “look forward” to getting a mammogram or Pap smear. I cannot wait for the hygienist to tell me again that my dental tape – which I use to floss every day, EVERY SINGLE DAY – is all wrong, and that I might as well be using nothing. I will refrain from mentioning that big, gross study that said that flossing in general is ineffective; you will tear my dental tape out of my cold, dead hands.

After a few months of fairly mild winter weather, we are suddenly living in a Planet Hoth Simulator; it is the kind of painful cold that makes it difficult to do anything at all. It’s difficult to get undressed to get into the shower, and then difficult to get out of the shower. It’s difficult to get dressed again and difficult to do regular things like get groceries or, you know, leave the house at all. The dog hasn’t been walked for days, although it’s “warming up” this afternoon so I might give it a go. Here is a sadly Canadian thing: this morning I chatted with a friend about how it “didn’t feel SO bad” this morning, at minus 24. It’s all relative, I guess. I’m trying not to complain. 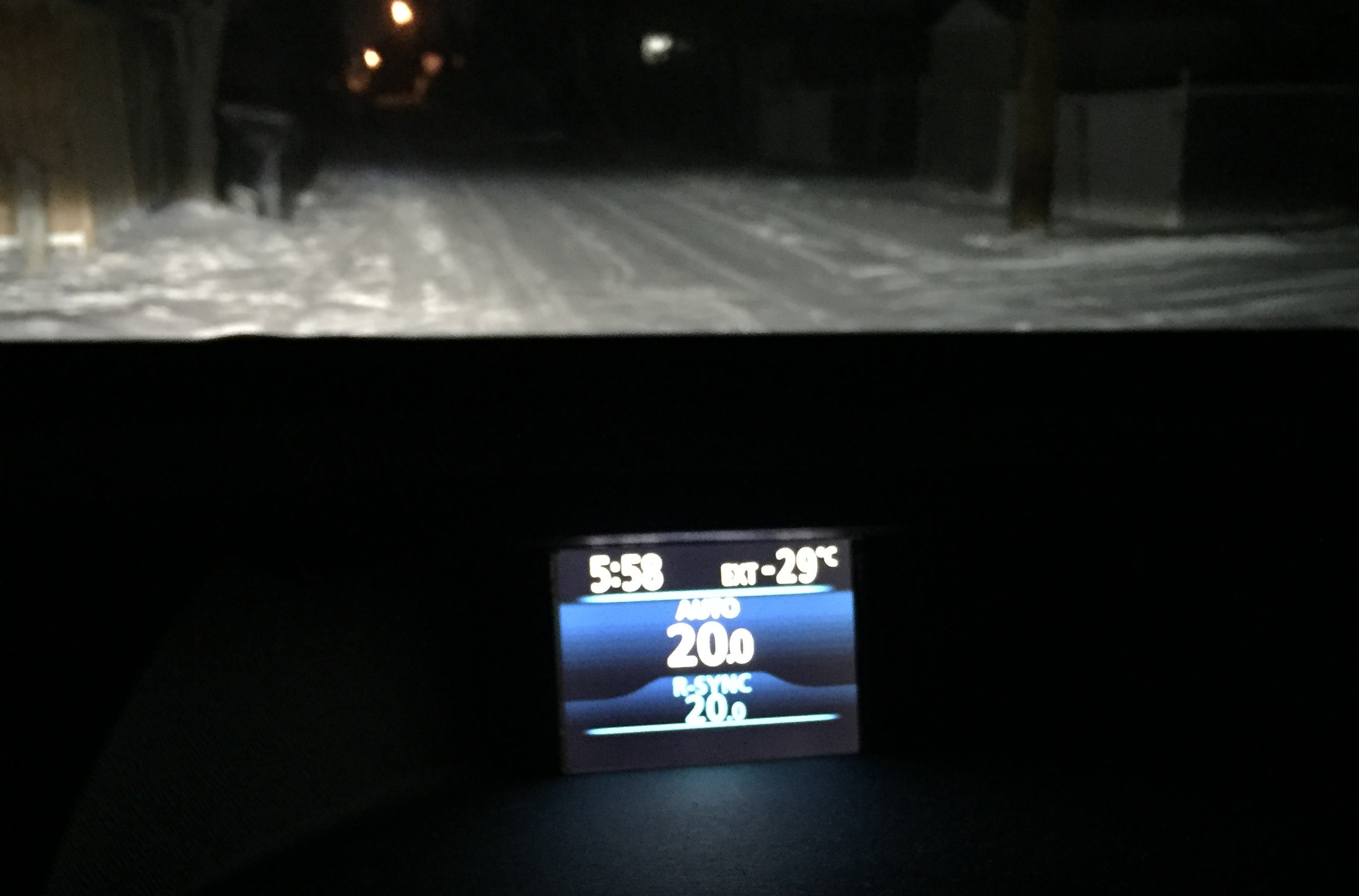 Thankfully the cold weather, along with sleety snow and treacherous roads, hit the day AFTER my son got back from his Epic Winter Camping Overnight Adventure. He got off the bus, enthusing about how great the trip was. He Loved Every Minute Of It. The apple not only fell far from the tree, but it rolled several thousand metres away, ending up in an entirely different orchard, with entirely different fruit.

Well, not entirely. The one thing he admitted he didn’t love was the food. “There weren’t any vegetables!” he said indignantly, adding that the only fruit available was in the form of apple cinnamon instant oatmeal. It made me smile. Imagine hauling fresh produce on a 12 kilometre uphill ski! Although the teacher in charge, and one of the volunteer dads each hauled a Chariot with ski attachment full of supplies all the way, which made me appreciate their fitness levels.

We do eat a LOT of vegetables and fruit around here, to the point where strangers comment on my grocery cart contents. If you are looking for ways to eat more veggies, well, I’m your huckleberry. 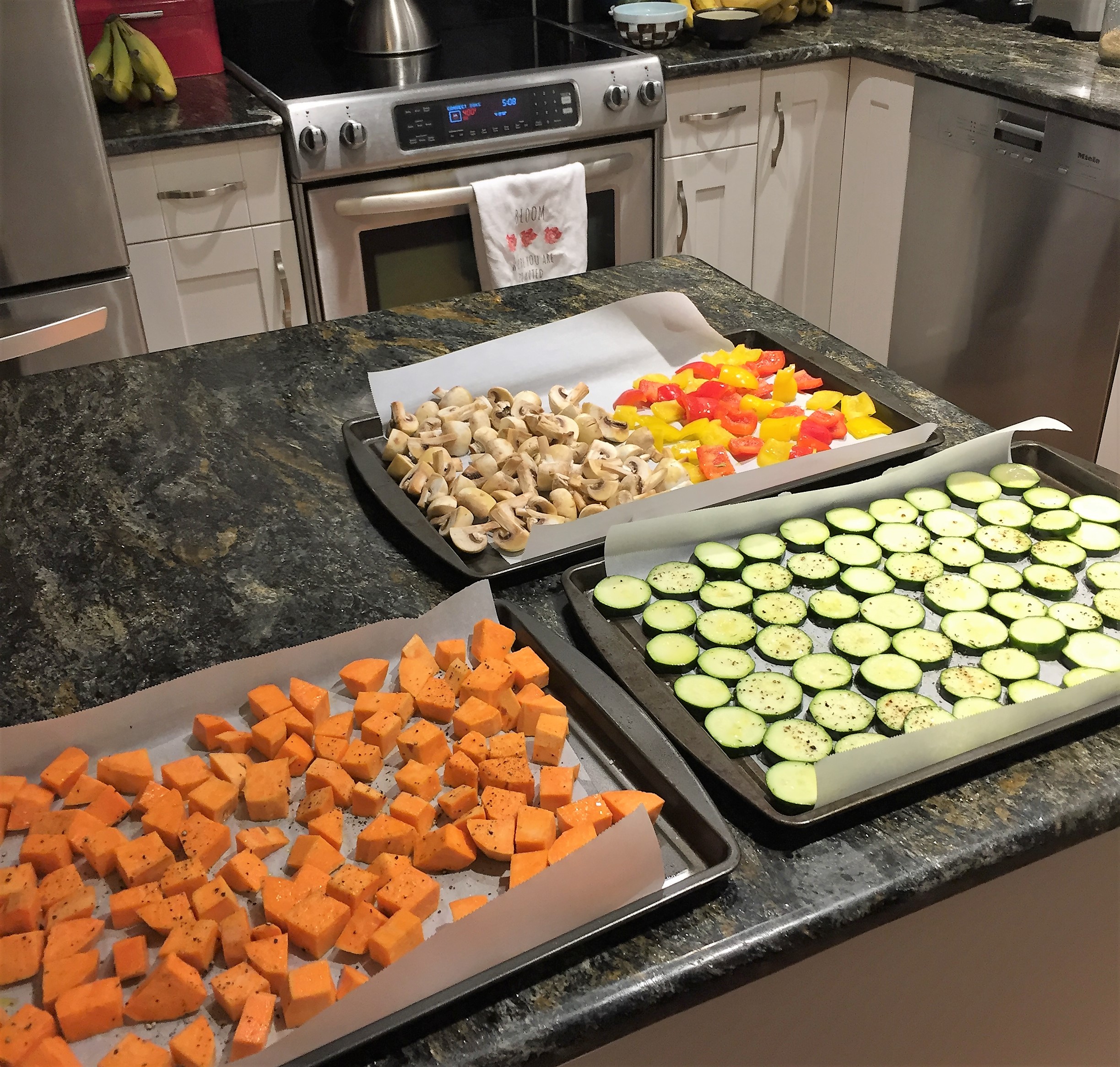 Lately, inspired by the lovely Suzanne (HI SUZANNE), I’ve been toying with sharing my weekly meal plans, including school lunches. I recently read something that basically said people have lost the basic ability to cook, due in part to the really super detailed recipes on blogs and in cookbooks. Is that true? When I was learning to cook, I had a very simple step-by-step beginner’s cookbook, and I was completely paranoid to deviate from the recipe AT ALL. OMG, I used a teaspoon of oregano and it was only supposed to be half a teaspoon! But with practice, all is coming, as they say in the yoga world. I realized that, other than for baked goods, I rarely use a recipe for anything. Even when it comes to baked goods, I change and modify the recipe almost always, mostly to cut sugar or to make it vegan or what have you, depending on who in the house is going to be eating it. So I think in the coming weeks I will start sharing my meal plans – which are pretty much the same week after week, with some variations on a theme – as well as my “recipes” for those meals. The “recipes” are always inexact and approximate, which is what will make them fun. They also contain vast amounts of vegetables, which you have probably already guessed.

One thing that you likely already know, if you have been reading this blog for any length of time, is that my husband and kids eat meat and I do not. I do cook meat for them, and I do not make separate meals. Essentially, which you will find out when I start posting my meal plan, I make a veggie-centric dish six out of seven days a week, and most of those days I include meat on the side, so the guys can add it to their meal. The one day I do not do this is Sunday, but that’s a whole other post.

Today I saw a woman asking for advice for her picky eaters; a woman I know who wrote a book and is evidently a parenting educator, strongly advocated for not taking her children’s personal tastes into account when making dinner. Just make dinner, and if they don’t like it, they can go fuck themselves, was essentially the takeaway. Well. I have very strong feelings about this. I always cook dinners that I, personally, like. I think it’s the prerogative of the cook to make things that they themselves enjoy. However. Imagine what it would be like if someone cooked for you and discovered that you have an absolute hatred for celery, as I do. Imagine then that this person was like “Well, I love celery, so CELERY IN EVERYTHING! You don’t like it? THEN YOU MIGHT AS WELL STARVE.” I think there is maybe a middle ground to be found here.

One thing I pride myself in is having calm, pleasant dinners with my family, and I don’t think that atmosphere can be maintained with an attitude of I’m making whatever I want and I don’t care what you like. The kids are teens now and basically hoover up everything, but when they were small, I would make sure that they had at least SOMETHING they could eat at dinner. One meal, yes, but sometimes things can be added or subtracted from that meal. For example, for years one of my sons would eat taco shells with cheese and vegetables on taco night, but all separately. To this day, my son who loathes tomatoes will eat a pile of pasta, just buttered. He also is the son who eats all the roasted vegetables I serve with pasta, so I consider that very acceptable. Everyone leaves the table full, and happy, and they always thank me for a “great dinner” whether it was something I spent all afternoon on or something I threw together in twenty minutes.

Anyway. This has gotten fairly wordy so I shall close. I think it’s going to be a fun way to spend February, writing about the Meals of the Boyhouse. I mean, what else happens in February? Valentine’s Day and rage about Costco carts? Well, there might be some of that too. I’m only human. xo