My husband was alerted by our insurance company that the forms we submitted were not correct. I was having an extraordinarily busy week, but Tuesday between classes I zipped over to the office to pick up the correct forms. When I got there, it was dark and the door was closed, but not locked. I opened it and was surprised to see all the assistants and desk staff sitting in the waiting room, all in casual clothing. On a Tuesday. At 11:45 pm. I explained my problem and the main receptionist took me to the desk and printed off a number of forms. She said they were having a “staff day” which, frankly, isn’t a thing, but I’ll get to that. I left, feeling somewhat unsettled, but I had the forms so that had to be something, right?

The next day, I was in the Superstore parking lot when I got a call on my cell from the interim orthodontist’s office manager. She explained that the orthodontist who “stepped away” really went bankrupt and although the other orthodontist had tried to keep the office open, there were all sorts of legalities that were popping up that precluded that. As I was absorbing this information, she gave me an option: I could continue with this orthodontist in the other office across the city, or I could just find a new orthodontist.

To back up a little, the last couple of weeks have been of the “just keep swimming” type. It’s just life, you know? Life is busy and hectic and joyful, but there has also been a significantly stressful thing that I have been dealing with. Add that to giving my cataract-ridden dog eye drops every few hours, and carrying him up the steps when he has been outside for more than five minutes, due to the extreme cold. Have I mentioned the extreme cold? We are in what is cutely called an Alberta Clipper, and it has been the longest, coldest stretch of weather since 1998. To give an idea of how cold it has been, every single day since February 1 the temperatures have dropped into the low minus twenties at night, windchill factors in the minus 30s and 40. After my Tuesday afternoon class, I left the studio thinking it suddenly was warm and beautiful outside; when I got to my car the temperature read -17. I have become so hardened that -17 seemed balmy. In addition, my garage door opener broke so every time I went in or out of the garage – which is many times a day, hashtag “mom life” – I would trudge through the snow, fight with our ill-fitting back gate and squeeze through, and open up the man door. So putting all these things together – plus, “ladies’ holidays!” – and I was, to quote from Shrek, a donkey on the edge.

I unloaded the groceries from the car, noting that I had an hour before I had to leave for my afternoon appointment. I thought to call the pediatric dentist for a little bit of guidance here, because, as you may imagine, it is not every day that an orthodontist goes bankrupt and leaves all his patients to fend for themselves. I mentioned to the receptionist, with my voice cracking, that I was a little upset right now, because of my son’s orthodontic treatment. “Oh,” she said kindly, “Dr. Halpern. I know.” At that point the dam burst, so to speak. I started to cry. I cried like an overtired two-year-old who missed her nap to spend the afternoon at the fair, ate cotton candy for the first time, and then, at the end of the afternoon, accidentally let go of the helium balloon given to her by the nice lady at the promotional kiosk. I cried and cried as I watched that theoretical red balloon float away, getting smaller and smaller as it floated to oblivion, probably to meet its demise in a wooded area somewhere to be consumed by, and subsequently kill, a beautiful member of the wildlife community. I sobbed so hysterically that I couldn’t breathe, as the receptionist spoke to me in a soothing voice, my mascara running down my face like Tammy Faye Bakker.

As we all know, hysteria isn’t that useful a coping mechanism. I somewhat collected myself and, while I was having a nervous breakdown, my husband was researching nearby orthodontists and calling to see who would take our son at this point. He found a place five minutes away who would give us an appointment the next day, and when I called to confirm, I was so relieved I started crying again. The office manager at the disgraced clinic was working for free, trying to help patients, and told me to get there before 3:00 and she would get help me with some administrative things. I quickly and badly fixed my makeup, and rushed over with a pounding dehydration headache, feeling hungover and swollen-eyed.

Even with all this I feel like we dodged a bit of a bullet: we are out some money but not a lot, and with my son in the early stages of orthodontia, we are better off than many, if not most, of the patients. We found a new orthodontist who is NOT a criminal, and as an added bonus my husband fixed my garage door opener. Yesterday I was on the go from 4:15 am to 3:00 pm, when I took a small break to give myself a mani-pedi and regroup a little. I was feeling much better about everything, and then my son broke a bracket last night after dinner.

Well. There are many, many worse things in the world. All of these are Princess Problems, most definitely. And yet. And yet they are still draining, and I currently feel like a wrung-out rag of a woman. I’m so tired. But there are many bright points: the new office was kind enough to squeeze us in on this Friday of Teacher’s Convention, before a long weekend. I have held off on drinking all week, despite being very very tempted, and tonight that temperance will be shattered with a nice bottle of Cab Franc. We are having my favourite dinner – Greek salad and pita with hummus – and Barkley was groomed yesterday, which has resulted in a giant Gund stuffie of a dog. Tomorrow, after all, is another day. 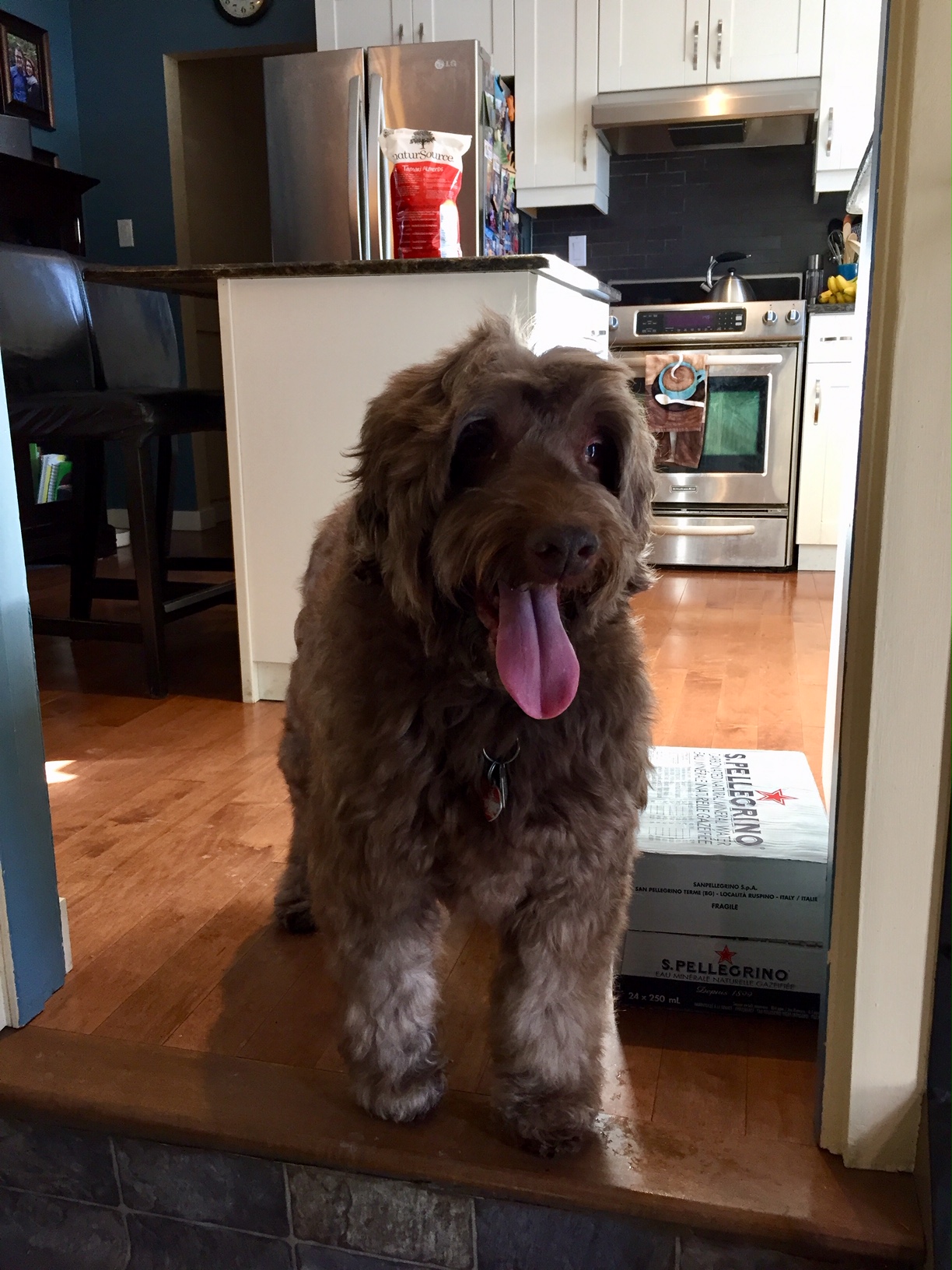 Barkley, helping me unload the groceries. 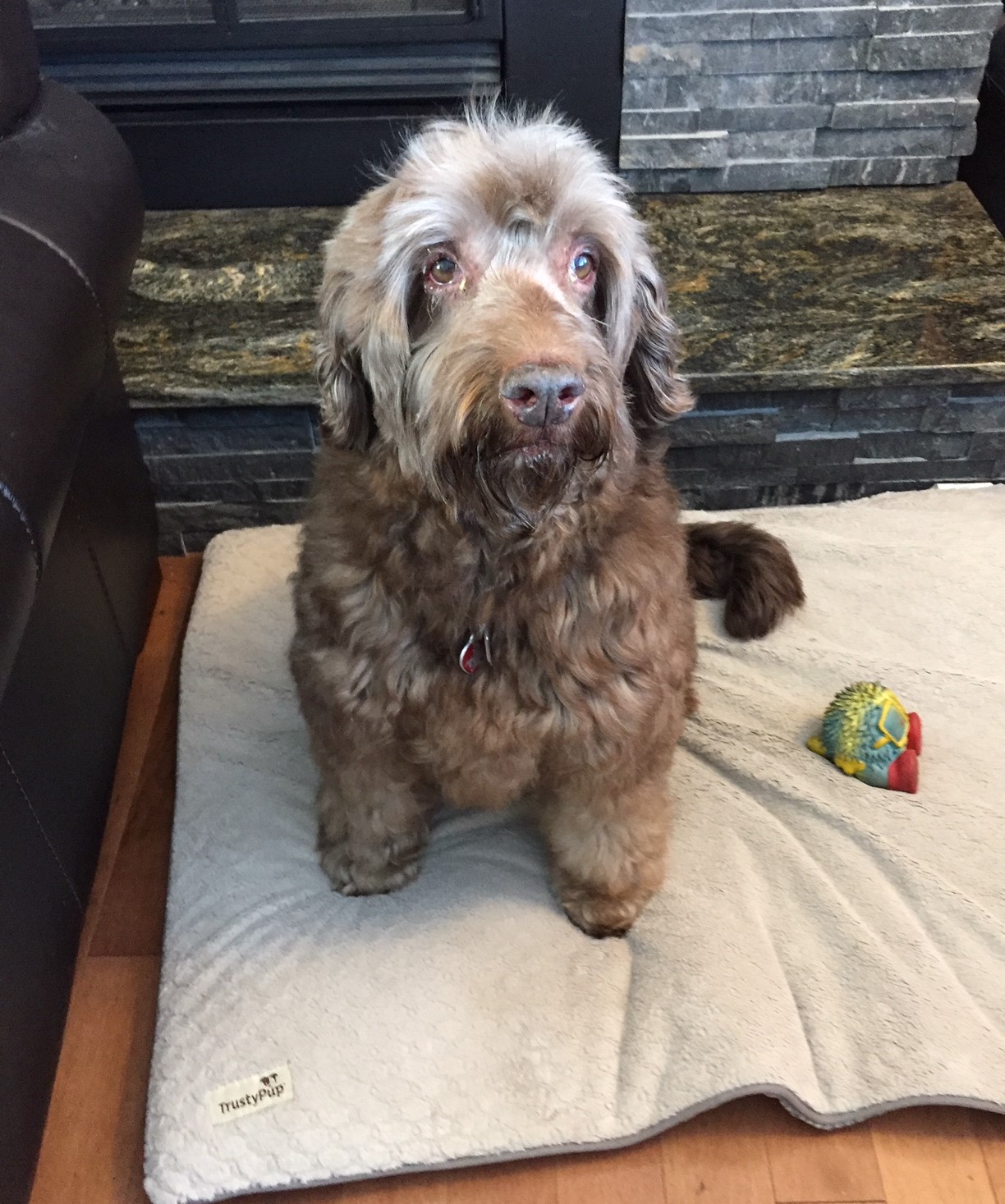 Barkley, wondering if he will ever find out who’s a good boy.