Friday evening, a mere 28 hours after the installation of my son’s braces, two of the brackets came off his teeth. Despite 26 months of Braces Experience with my older son – who, by the way, broke every single rule in the Braces Handbook – this was the first time such a thing happened. I can tell you that it did nothing to assuage my fears about all the changes in the orthodontist office. Even though it was 6:30 pm, I phoned the office and was connected with the After Hours Line, which redirected me to the previous, no-longer-practicing-and-possibly-disgraced orthodontist. I left a message with very little hope, and then set to google “emergency orthodontia.”

Did you know that a lot of emergency orthodontia can be done at home, with everyday household objects? Alarmingly, there were many tips on DIY orthodontia using nail clippers, needle-nose pliers, and pencil erasers. None of those solutions seemed relevant; instead I helped my son put orthodontia wax in between the two flopping brackets to hold them steady, hoping that the rest would stay adhered to his teeth, so we didn’t end up with a wire held together by two brackets, or something.

Imagine my surprise, then, when I received a phone call from the new orthodontist on Sunday afternoon, apologizing for the delay. He had just received a message from the previous no-longer-practicing-and-possibly-disgraced orthodontist, and wanted to assure me that he could fit my son in at 8:00 Monday morning to fix the issue.

I don’t know if it is just because I finished reading The Alchemist, but I have been seeing signs and omens everywhere. My morning classes were cancelled this week due to some work on the studio, and when I found out about this I was slightly put out. Why my classes? Why those times? Why why why? But now it feels like a divine plan, because I was able to deal with the orthodontist with no stress or rush; if I had class I would not have been able to do so. I also was able to go to Costco, a rare treat to be able to do that first thing in the morning, not only because there are almost no carts left helter-skelter pell-mell in the parking lot that early in the day, saving my mental health, but also because it was nice to have it over and done with before my afternoon class.

And whether or not it is clear to you, no doubt the universe is unfolding as it should, a line from my very favourite Desiderata, has been going through my head lately, along with trying to notice signs and omens from the universe. I have, officially, reached Peak Yoga Teacher Mode. There have been many things going on around the Boyhouse, and I am trying to keep that perspective.

A few weeks ago my husband was saying that January was just DRAGGING, to which I perkily replied that no, it was flying by, and it was nearly over in any case. It was January 19 when I announced this and things have been moving slowly since then. I can tell you that with all the craziness, outdoor-education events, snowboarding, orthodontia, a minor bout of sickness for one kid, and other things it does feel like a long month, which is silly: it is exactly the same amount of days as most months.

And here we are at the very end of January, and I haven’t yet posted my monthly Favourite Things, so let’s rectify that, shall we? We have had an extremely mild month, although that is set to change dramatically on the weekend. And even a mild January is still chilly, so welcome to…

Before we get to all the coziness, I have a few great things to say about January. I know we all like to loathe this month but I’ll tell you, there are some really wonderful things that happen in January. First of all, THE SALES. I actually went to the mall early in the month to pick up my favourite body lotion from Bath and Body Works, and they were blowing out so much stock at 75% off. SEVENTY FIVE. I asked, with some trepidation, if they were discontinuing the scents that I love – notably Sea Island Cotton – but no, they were just changing the packaging. I ended up with ten bottles of lotion with various gorgeous scents for $42. Then I went to The Body Shop and I ended up getting three of my new favourite face mask – this amazing face mask deserves its own post, so stay tuned – for $48, when ONE is priced at $28. I now have enough to last me the whole year, I think.

Another wonderful thing about January is the sunrises. Even in the middle of summer, I am up before the sunrise, so I can say with some authority that January sunrises are the prettiest. I don’t know what it is about winter skies, but everything is gorgeously pinkish-purple. I’ve tried to take photos but they never do it justice; you will just have to imagine. Many days are gloomy and grey here but when the sun comes out and the sky is blue, it’s absolutely beautiful against the snow. A few weeks ago we had a day of thick hoar frost covering everything; I would have taken a photo but my hands were too cold. Again, just imagine it; thick hoar frost on all the trees, white snow, and a perfectly blue sky. I am not generally a Winter Person but I have to give it to the season: it can be very pretty. 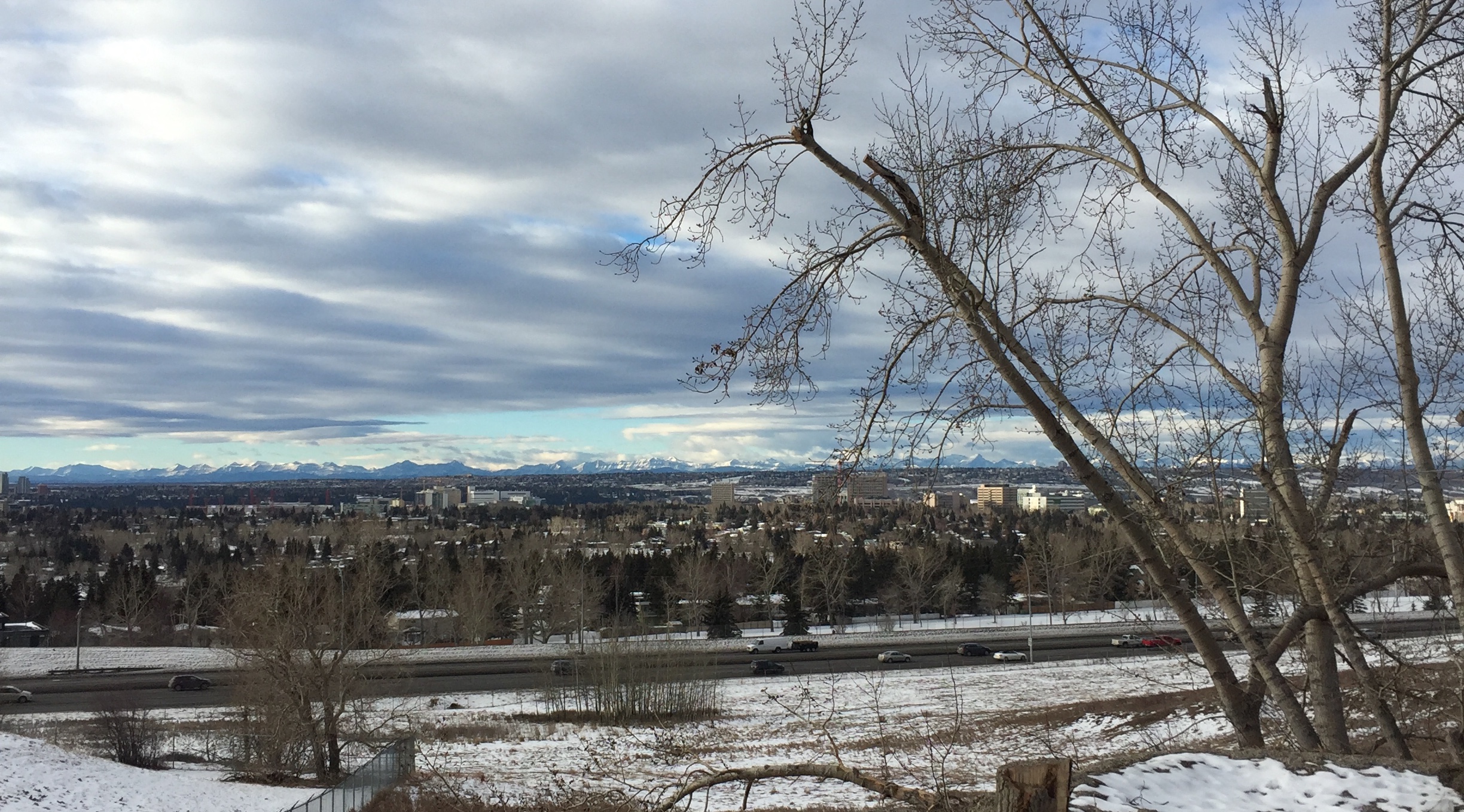 The very best thing about the dead of winter is wearing thick, cozy sweaters. Here are a few of my favourite looks: 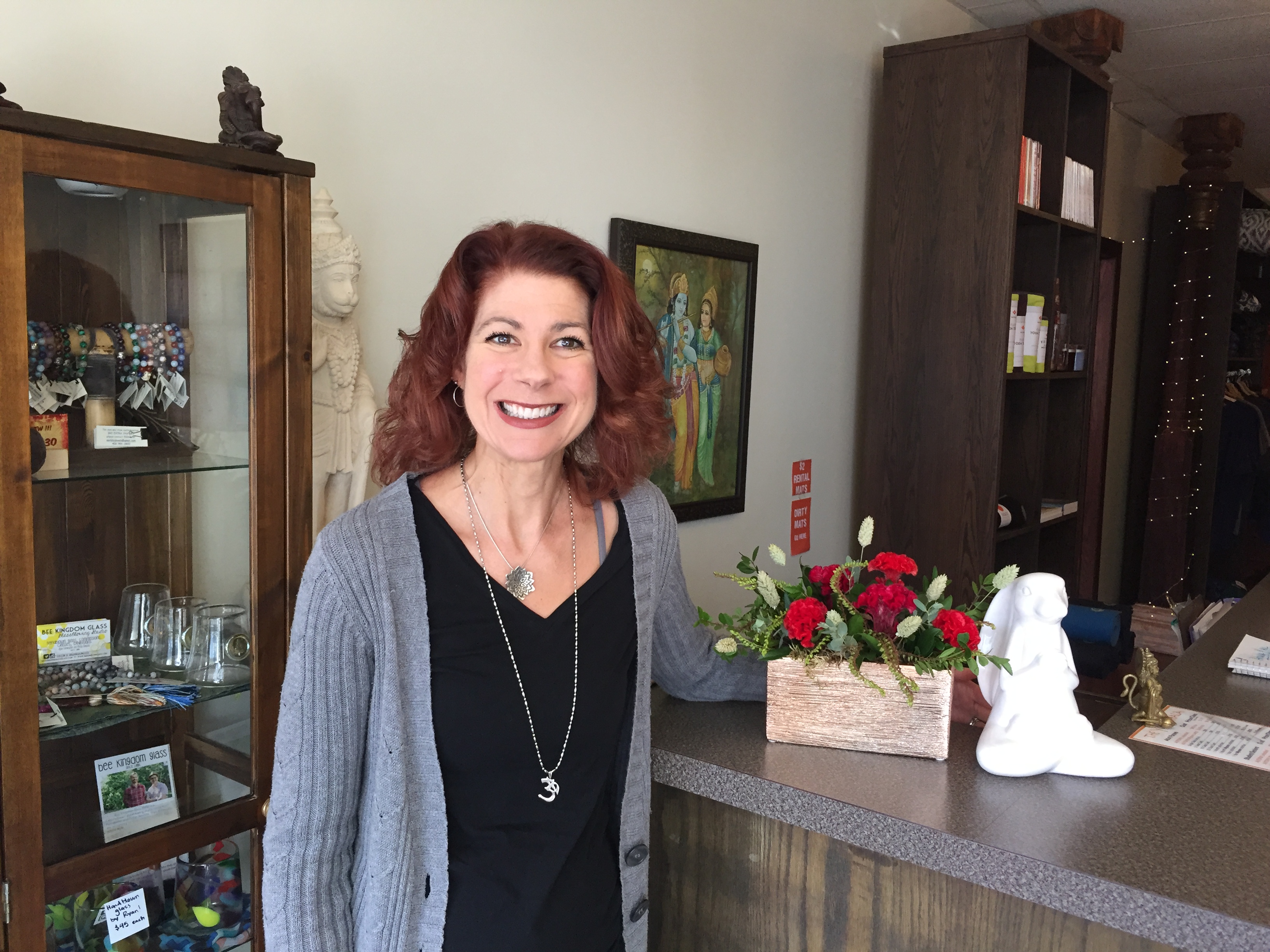 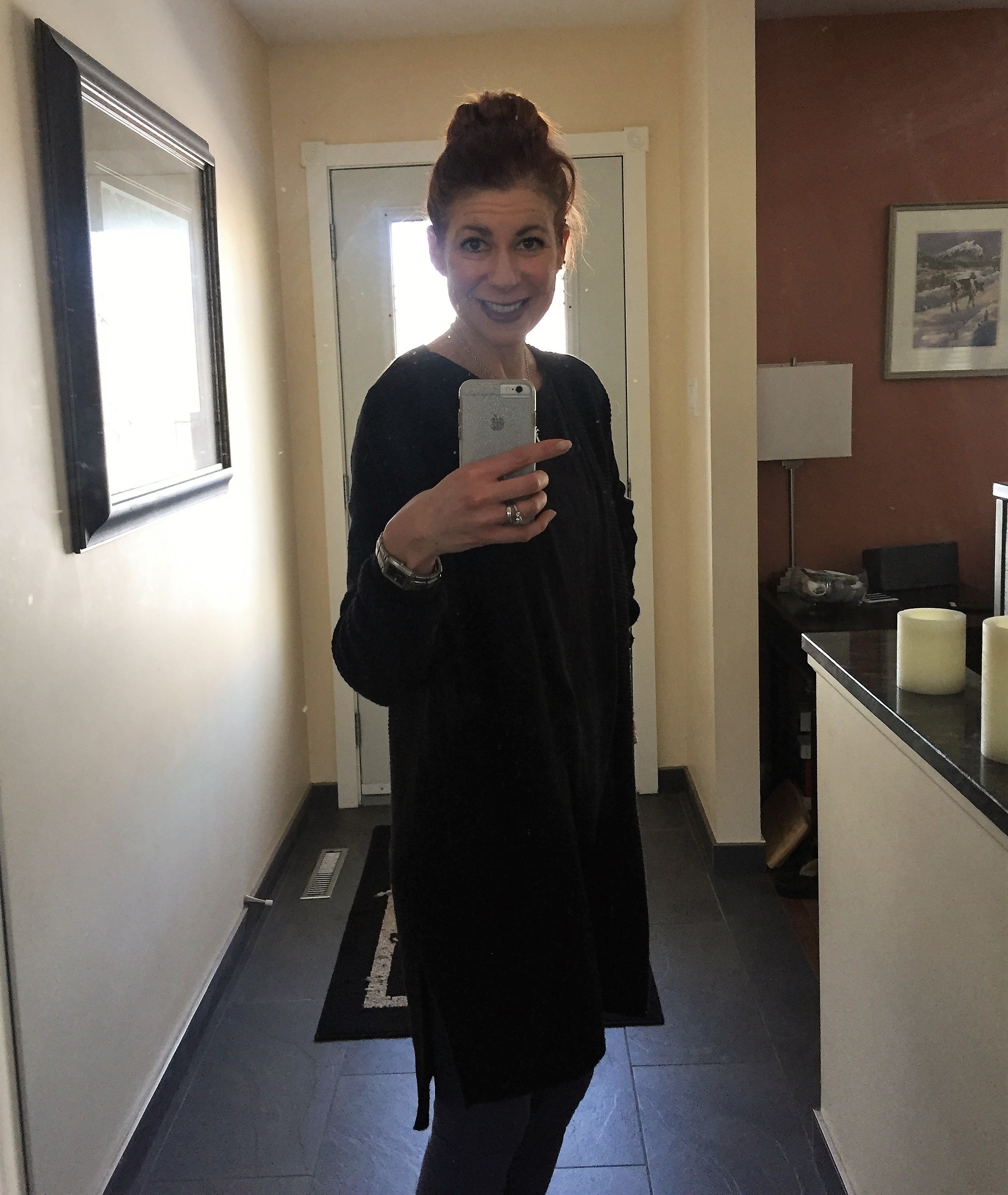 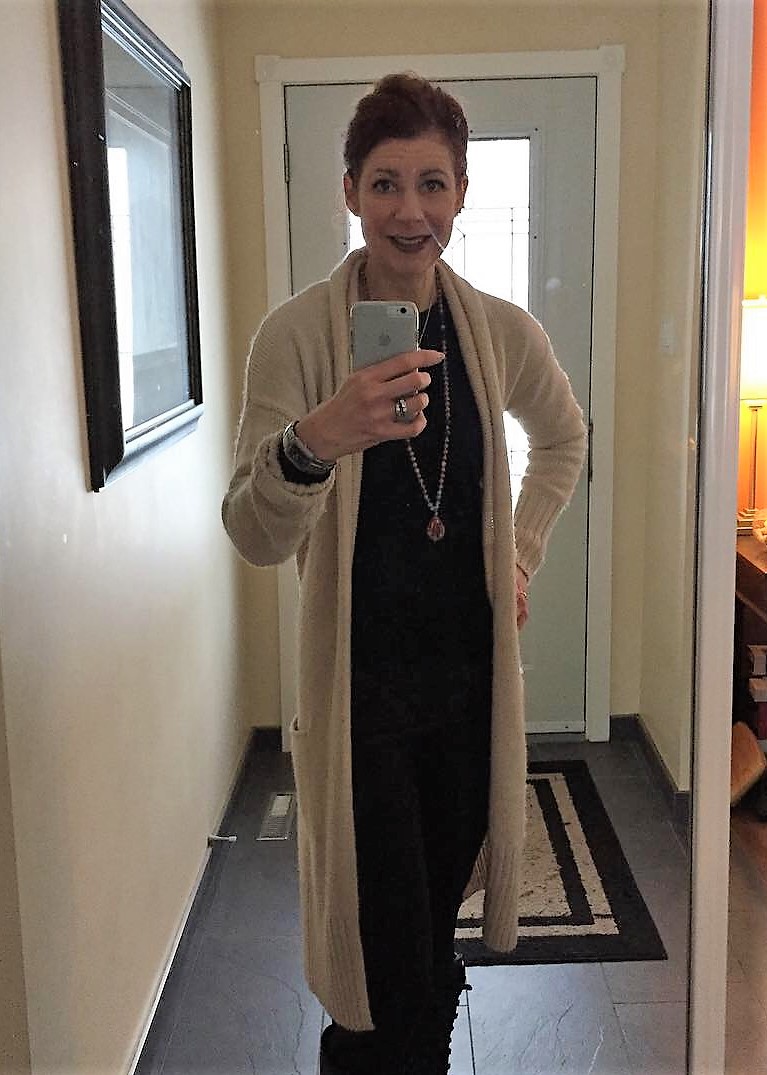 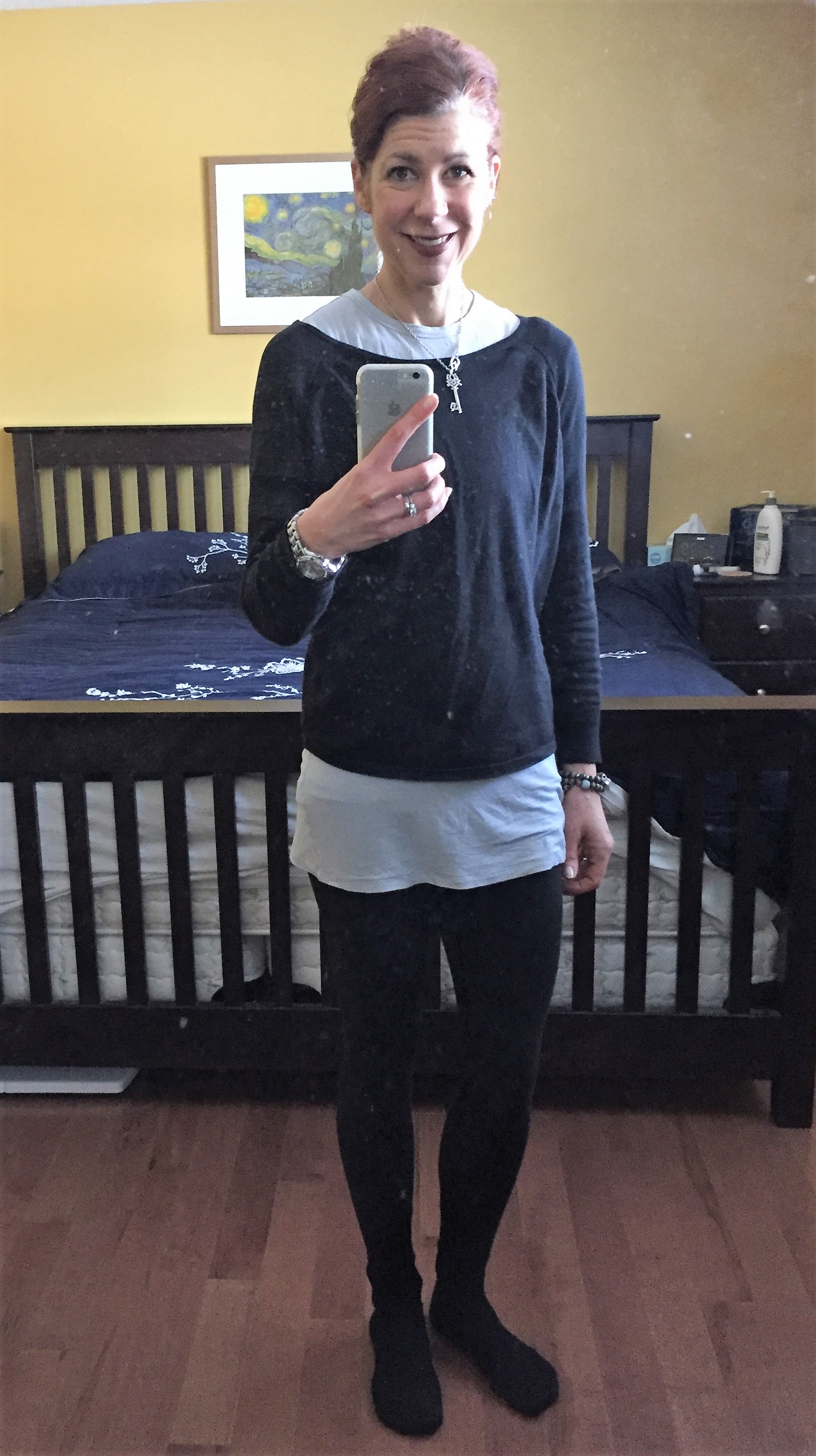 As you can see, I like long, drapey sweaters – especially cardigans. It’s like wrapping myself up in a big hug.

Hand-Knit Things From My Mother-in-Law

My mother-in-law is a knitter, and her knitting knows no moderation. I am the very grateful and happy recipient of many items – you should see the enormous cupboard full of knitted dishcloths I have, in a rainbow of colours. For Christmas about nineteen or twenty years ago, she knitted me this grey sweater. It is my “home sweater” that I wear when chilled and need of comfort. I am much smaller now than I was then, so it’s lovely and large on me, and I can wrap it around myself even when I have a few other sweaters on, not unlike Joey Tribbiani when he is wearing All The Clothes. 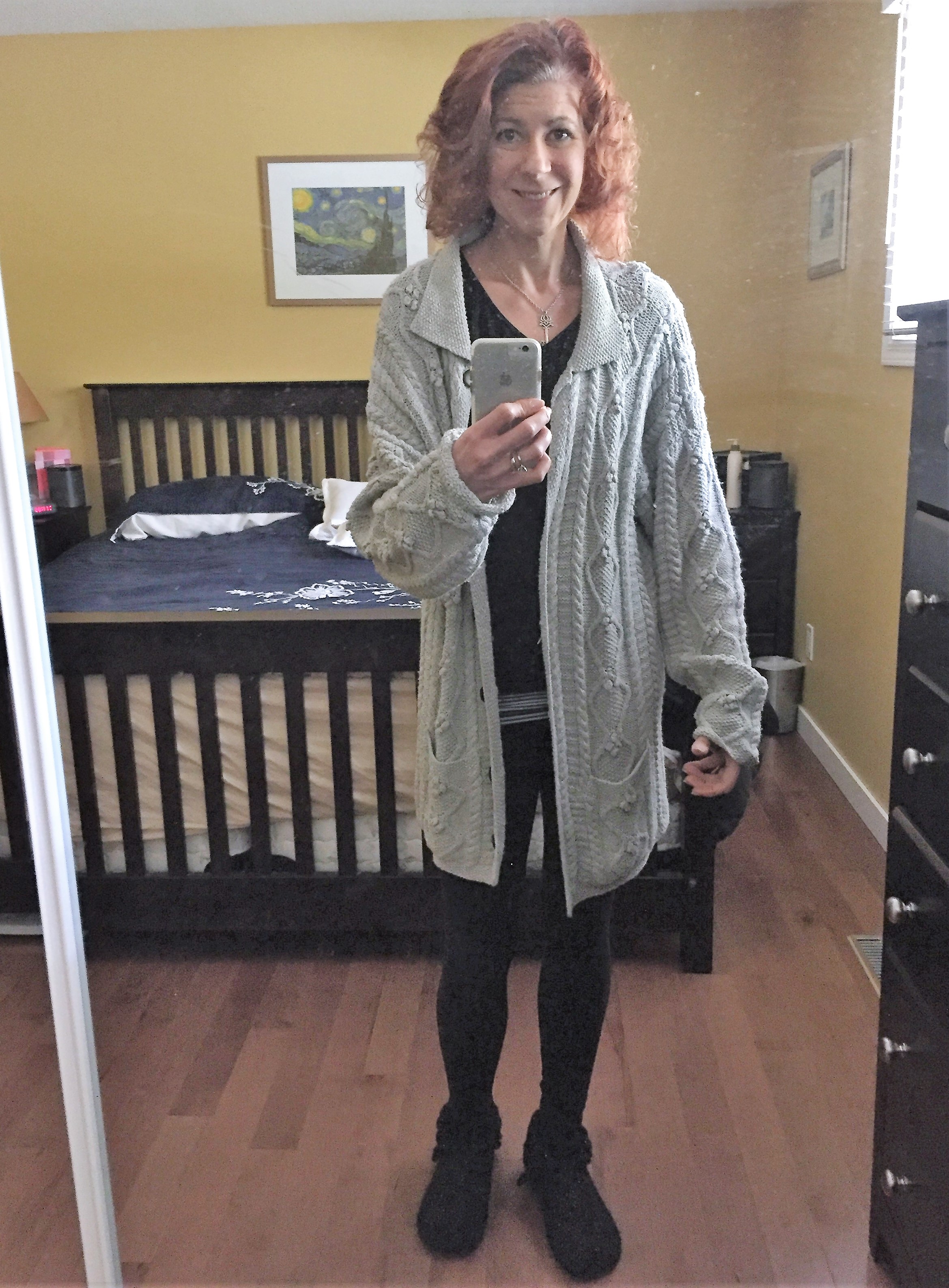 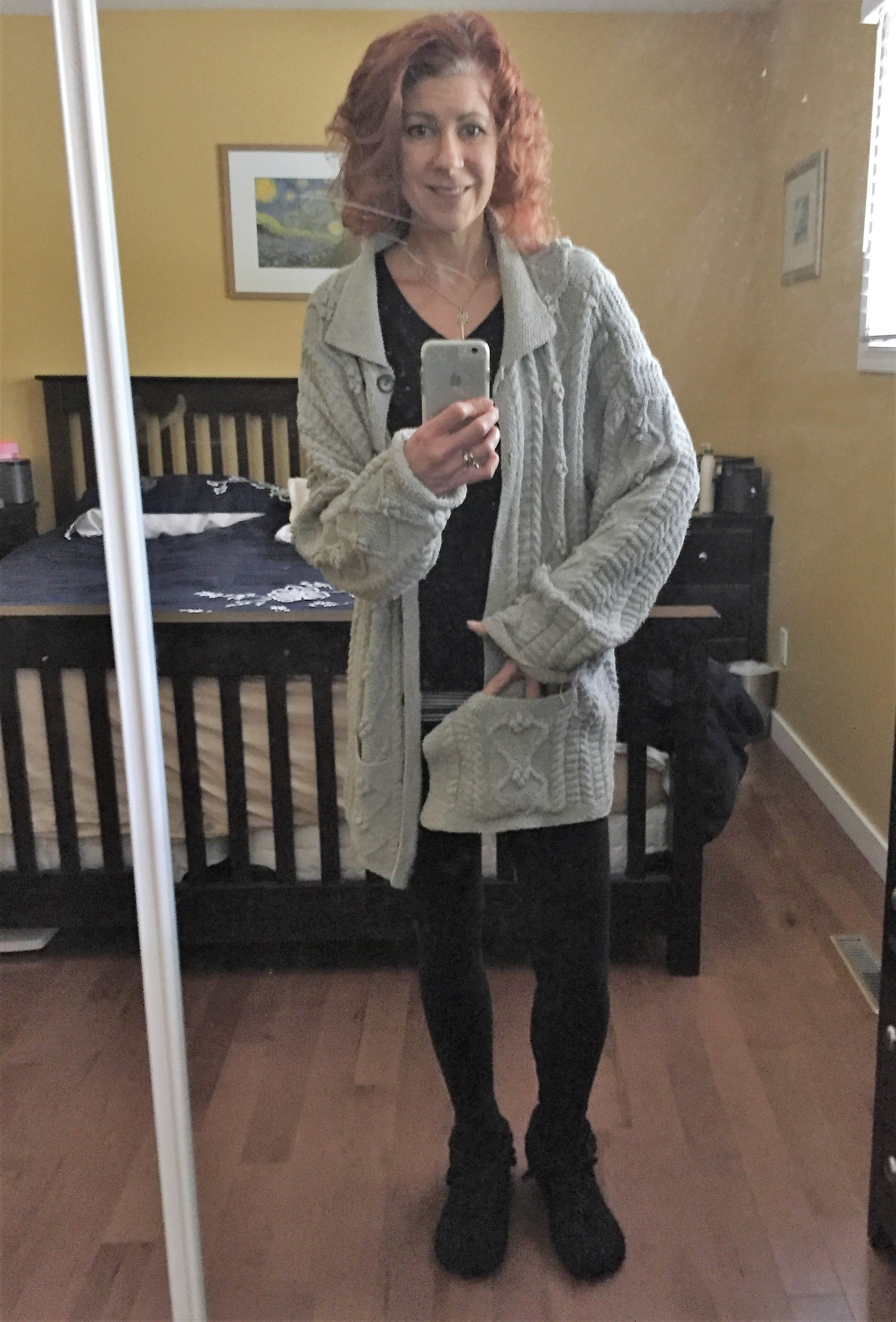 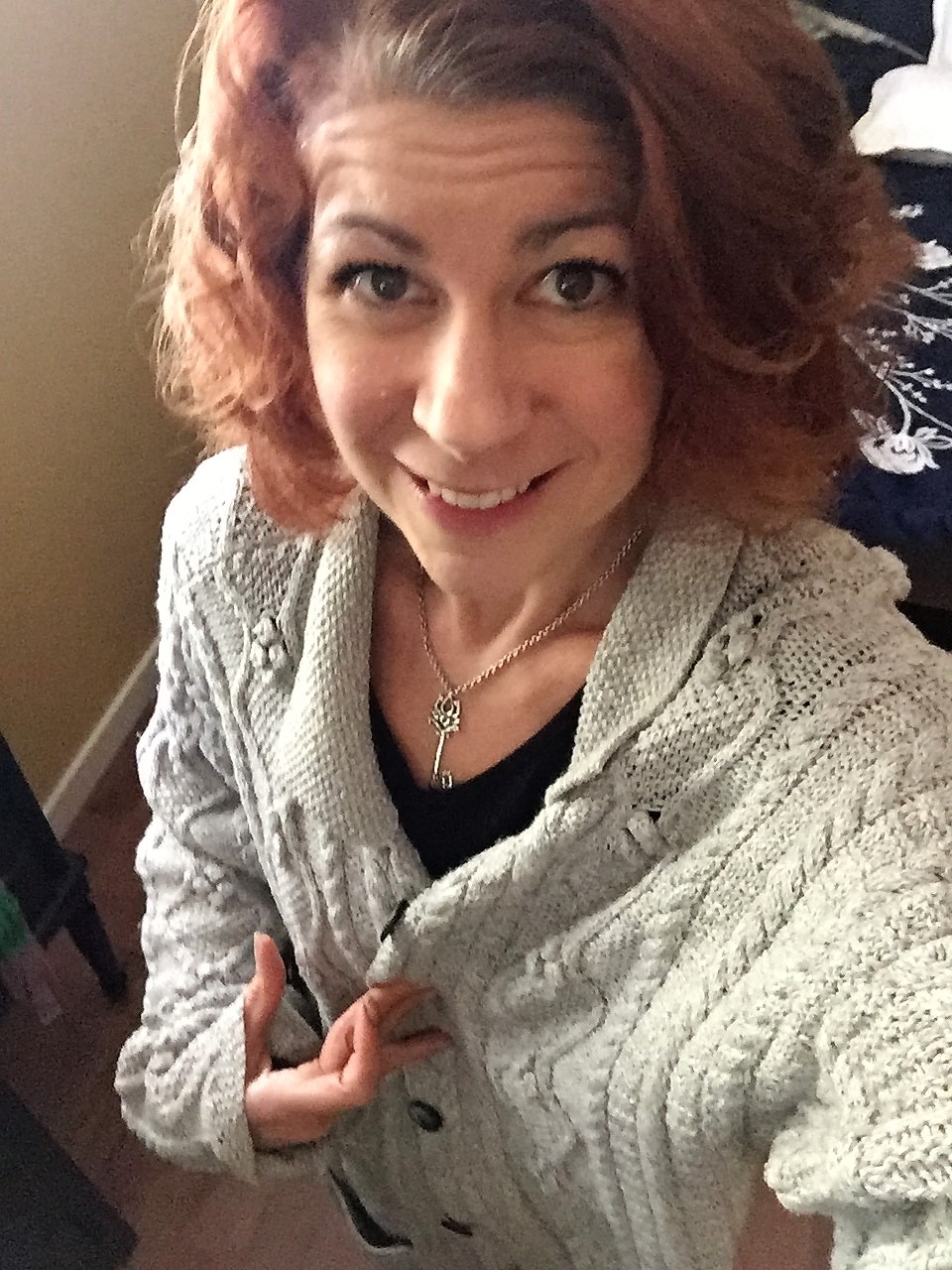 The sweater matches the roots, and no weird euphemism implied.

She also has knitted me many pairs of legwarmers, that I slip over my yoga pants or skinny jeans to keep warm while dog-walking. 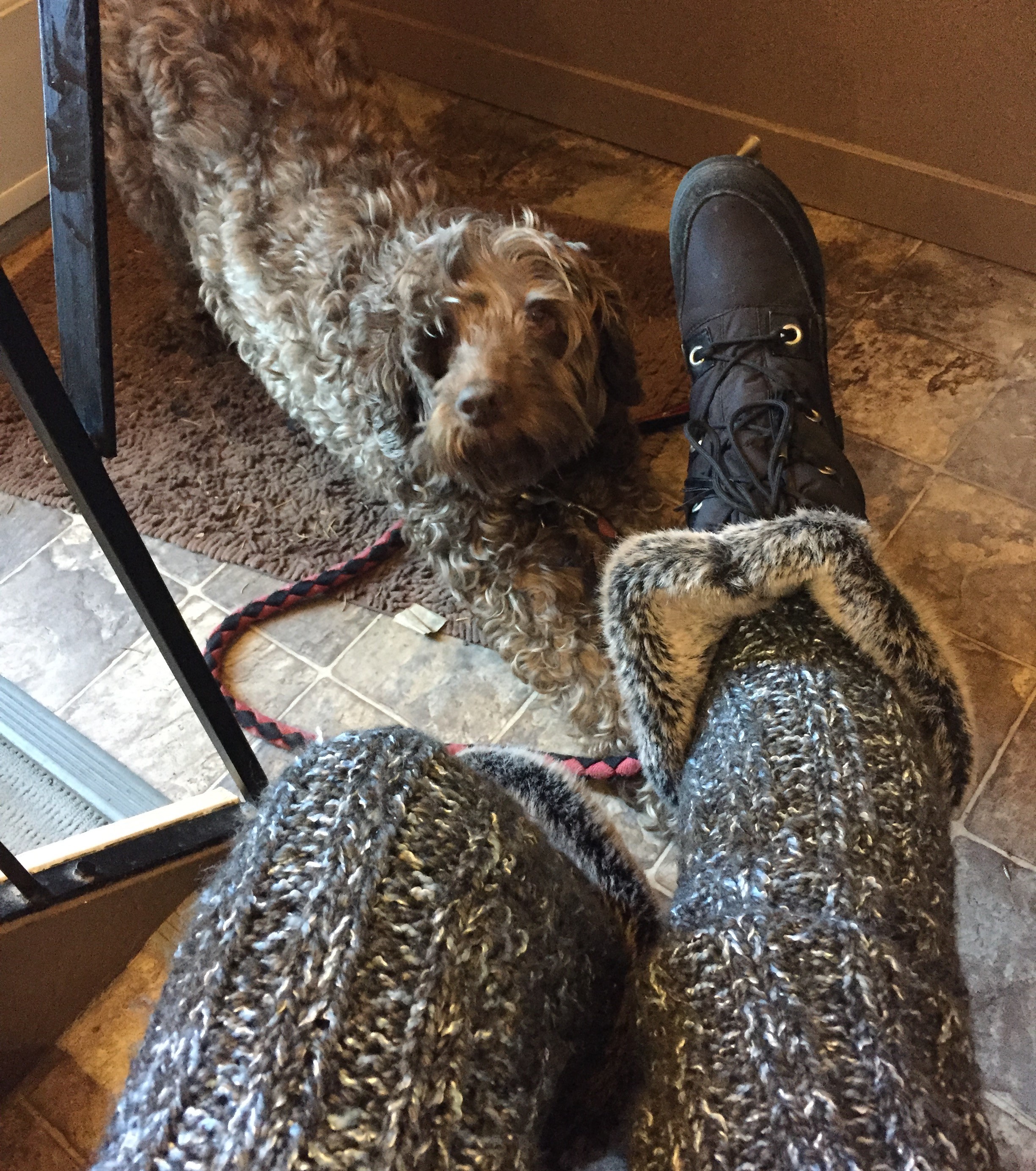 Her latest gift to me was a pair of booties. She has knitted me slippers – I am wearing them right now – but she decided to make long booties for when I’m cold inside the house. 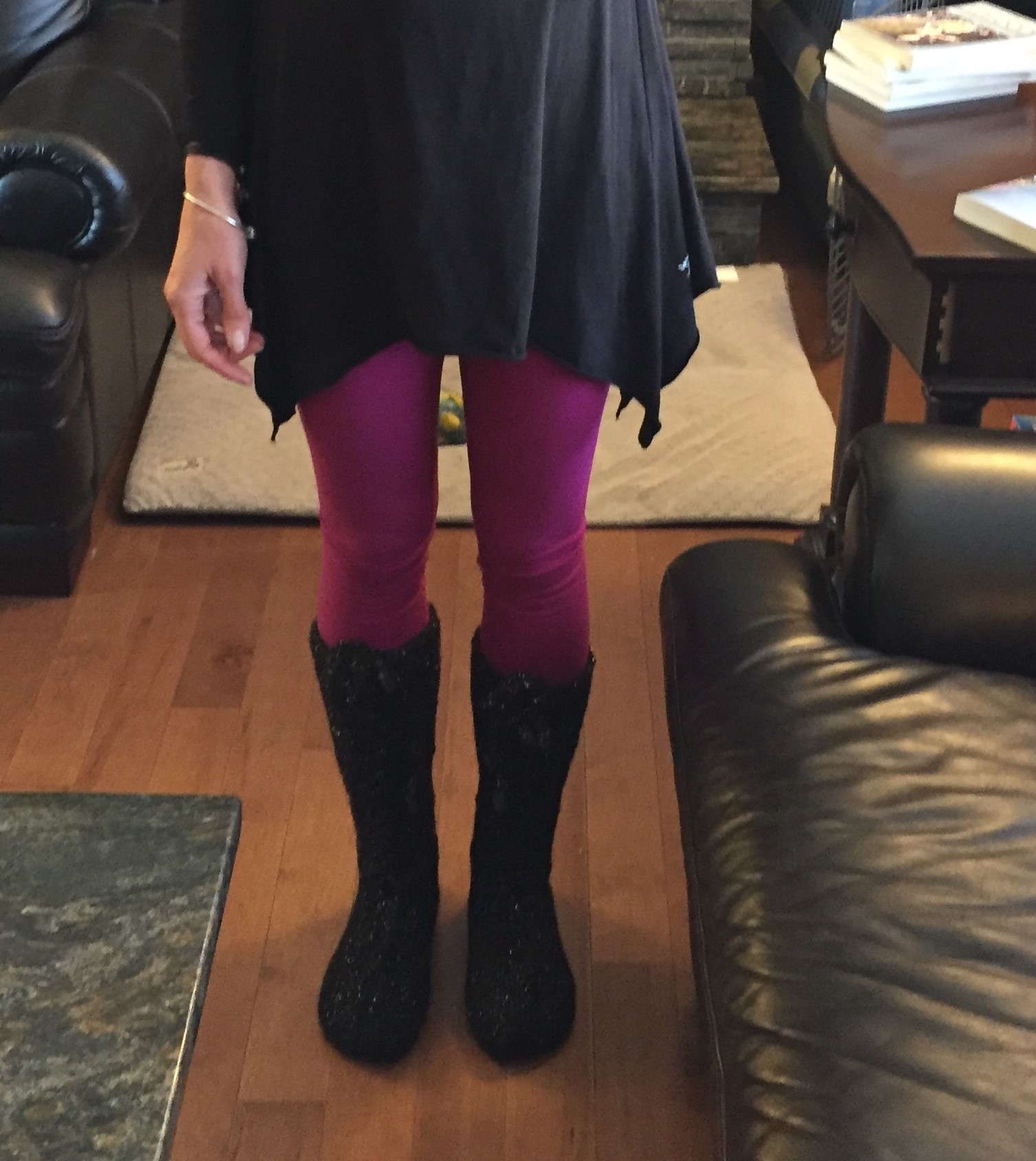 You know that meme that says “we all have that friend who is always cold” that is accompanied by a photo of a person in what looks like a giant thick sweater from head to toe? I think that may be next. What can I say, my MIL is generous and talented with the knitting needles!

When it comes to hot liquids, I am generally a Black Coffee Girl. 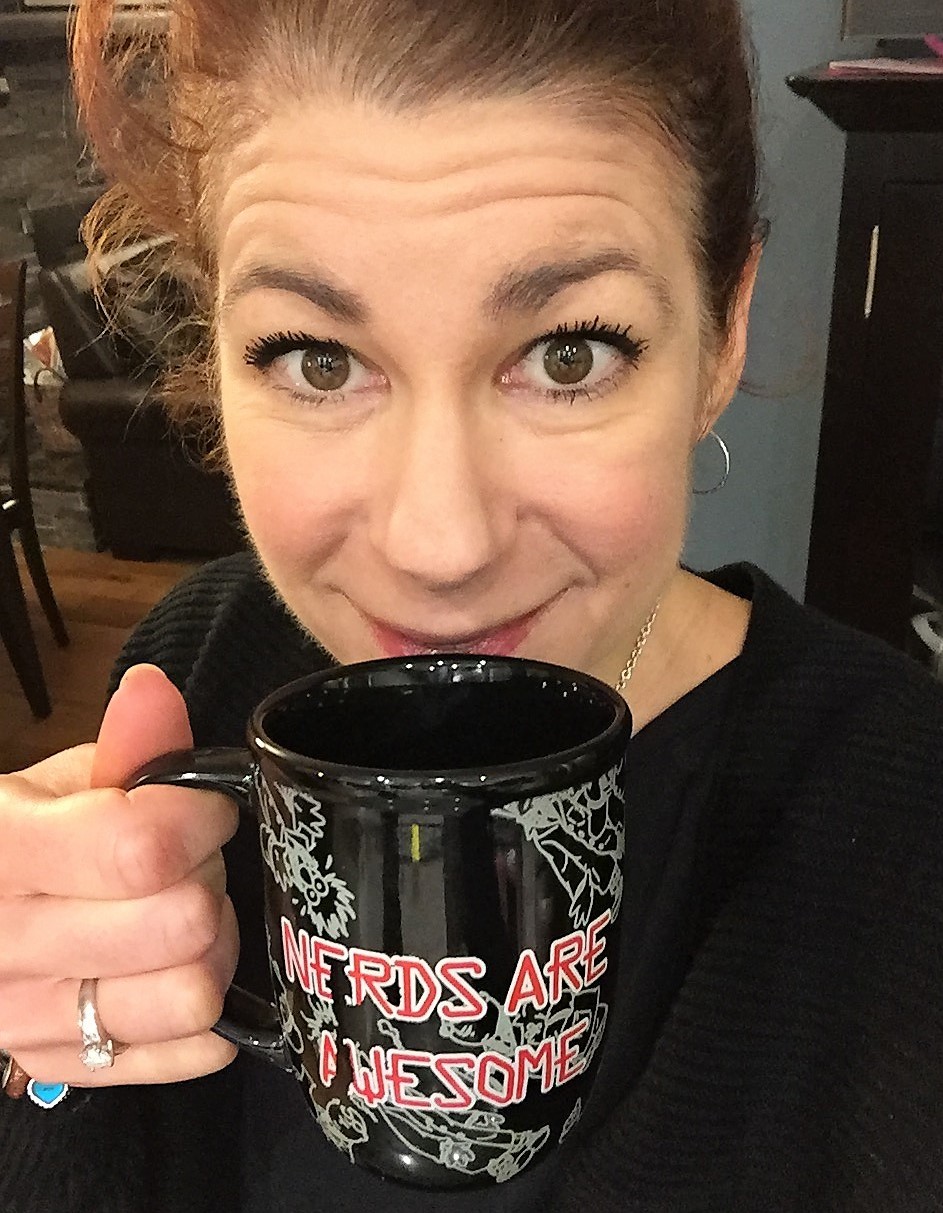 Last Mother’s Day, the boys bought me this adorable turtle mug – the turtle changes colour with temperature – and some fancy tea from David’s Tea and I tell you, I cannot go back to regular grocery store tea. I will not go back. I have been forever ruined. My husband actually said I can’t believe we found a way to make you more expensive which was a tiny bit uncalled for. But also maybe a little true. In any case, I only have tea one or two times a week, and only when it is really chilly and I am home in the afternoon. Cinnamon Rooibus Chai is my absolute favourite, but I’m also a big fan of Just Peachy and Forever Nuts. 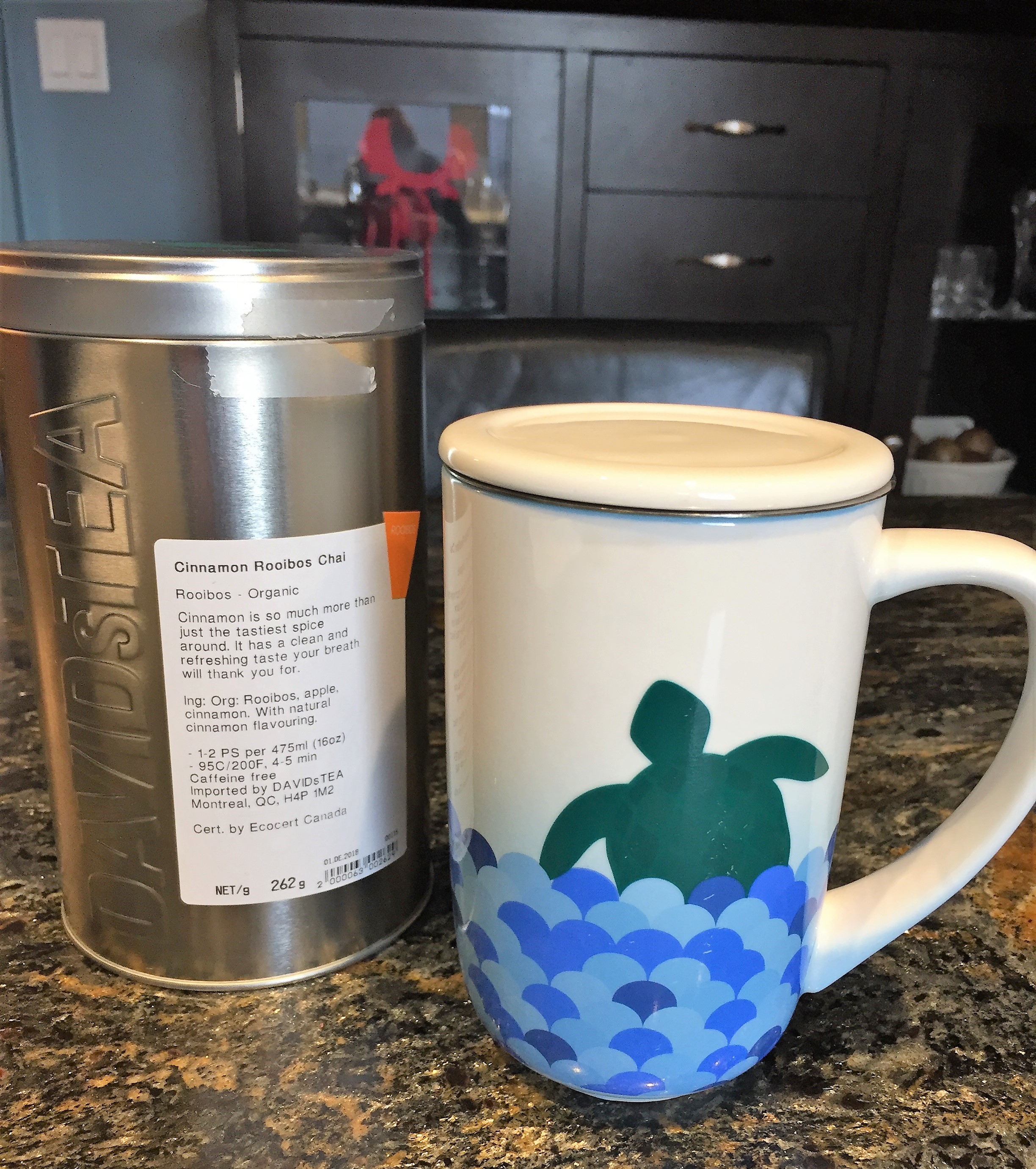 So you see, there are many wonderful things about this – and every – time of the year. And even if I haven’t convinced you to love all things cozy, well, January’s OVER now, for another eleven months. xo