Sometimes it feels weird, writing when there are so many tragic, horrific, and frankly depressing things going on in the world. It seems strange to complain about the astounding difference the subtraction of one child from the household makes in terms of noise, activity, and general household mood. This is not a particularly important thing in the world, but it is an important thing to me. I was in a state of low-level worry, but my young traveller actually phoned me yesterday, and all is roses and happiness, and to say that the phone call lifted my spirits would be a tremendous understatement.

All of our spirits were a bit low this week; there was an honest-to-god, Pa-sings-his-sunflower-song blizzard on Monday, complete with snow, high winds, and general despondency. Well, we had a good run. 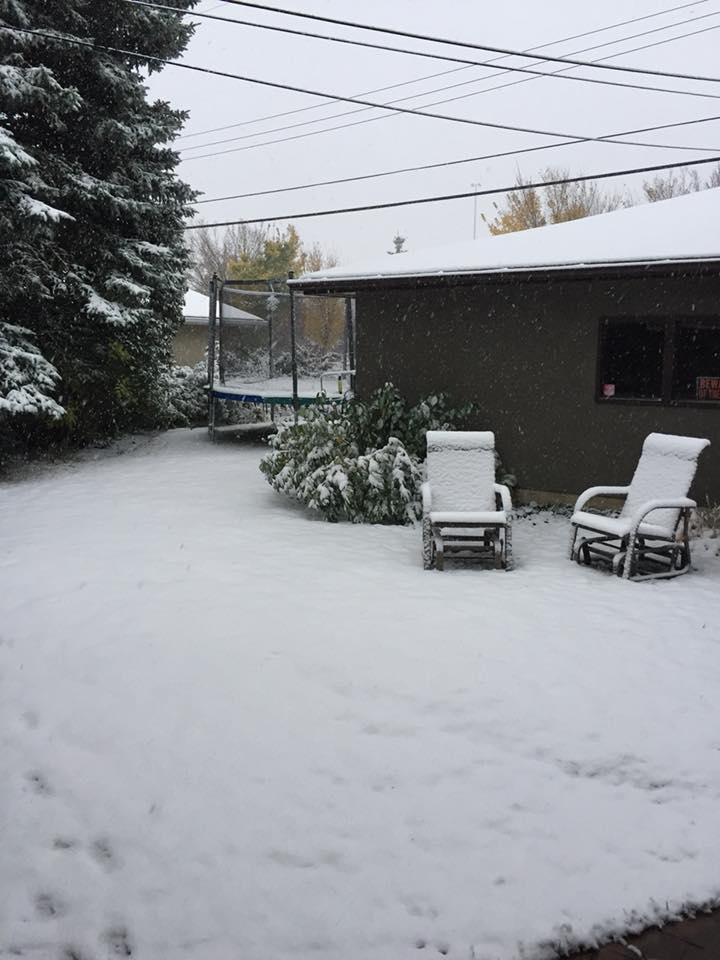 I learned an important lesson yesterday, speaking of general despondency, and that is that choosing to shop at Costco on the day after a blizzard is not an optimal choice for anyone wishing to retain any semblance of sanity. A few months ago my friend Janet (HI JANET) told me about the magic time to shop at Costco, which is 2:00 pm on a weekday, and when I switched my shopping schedule to that time, the experience was better, albeit some days marginally so. But marginally better is still better, and so yesterday I pulled into the parking lot at 1:35, and I do not think that I am exaggerating when I say that I wondered if I was taking my life into my hands. There was much road rage, people randomly and rapidly backing up perilously close to my and other’s cars. There were people swerving around pedestrians wielding giant carts, nearly making contact with my and other’s cars. I am surprised I didn’t seem random people flattened like cartoon characters in the middle of the lot, and I hoped I could get out of there without loss of life or limb, or at least without having to make an insurance claim.

I made it inside the store and the lineups to the checkouts snaked all the way around the aisles; I despaired of reaching the toothpaste section, and I had a coupon for $4 off a five-pack of that 3D whitening toothpaste I like. Don’t make this coupon go to waste, people. I vowed to take a photo when my turn for the checkout came, so I could send it to Janet to let her know that her magical time wasn’t magical after all, as if Janet was the Costco-whisperer and this entire herd of people with their giant carts was somehow her fault. I went to fetch everything on my list, keeping a slight smile on my face, because in the words of Diane Court’s mother, “Smile, dear, because when you don’t your mouth turns down.” I grumpily noted that they did not have the giant can of cocoa powder that I wanted, but they did have some nice strawberries. I wondered if I would even make it out of the refrigerated produce section alive, but when I got there, it was empty with the exception of one woman looking at every single clamshell of strawberries and a man staring blankly at the kale salads.

People, by the time I wound my way around to the checkout, the crowds had dispersed and there were only a few carts in each line, at 1:55. Janet, I am sorry I doubted you. You are indeed the Costco whisperer. The parking lot had plenty of open spaces too. JANET IS RIGHT, IT IS MAGICAL.

Speaking of checkouts, do you ever notice those tabloid magazines that have incredibly unflattering photographs of celebrities with captions about beach bodies or the lack thereof, or the weight of the photographed celebrity with a caption about letting themselves go or eating themselves to death? These unflattering photographs must be a part of a very successful business plan, since the magazines have been doing this for many decades; obviously they sell the magazines. I always feel a wave of pity for the celebrities; clearly they are photographed without their knowledge or consent, and even though there is a little bit of caveat emptor, being in the public eye and all, it still is fairly vile. We have all taken those accidental selfies with our phones on our lap; imagine if those selfies were being used to sell magazines? Double chinned, wrinkly, and ruddy: Nicole is letting herself go!

Imagine also if there was a photographer trained on you at all moments of the day, and that any moment – any moment at all – could be posted for all the world to see. Well, I have news, dear readers: this is already happening. You may remember a while back there was a meme going around with a photo of a woman at an airport; she was looking at her phone and her baby was lying on a blanket on the floor. SHAME, the internet said, SHAME THAT SHE ISN’T PAYING ATTENTION TO HER POOR BABY, I’M SURE HER PHONE IS MUCH MORE COMPELLING.

*I know, I didn’t really pay attention either. But the internet did, fortunately.

Well, that woman has released a statement – A STATEMENT – that saying that she was exhausted, her flight was delayed, and she just needed to put the baby down for a moment while she texted her family. I have a huge problem with this.

SHE SHOULDN’T HAVE TO SAY ANYTHING.

In today’s society, we seem to feel that we can view a snapshot of a person’s life, one single second, and make a sweeping judgement about them. She’s a bad mom, she doesn’t like her baby as much as her phone, she is making terrible choices and we are all a nation of zombies. I have more news: we can’t make these judgements. Until we are comfortable with someone tracking our every move and posting photos for all the world to see, maybe we should keep our snap judgements to ourselves. If you haven’t been exhausted and looked away from your baby for a moment, then you probably don’t have a baby. I did not have a smartphone when my kids were small, but I did take them to the playground and would often sit on the bench reading a book or O Magazine (don’t judge, I was living my best life). My eyes were not on them for every second and frankly, it would be weird if they were.

I also saw someone online berate this woman for having her baby on the germy floor, but honest to god, everything is germy. Airplane seats and seatbelts, public change tables, the key pad where you use your credit card – all of those are covered in filth, that’s the world, we have to deal with it. In any case, the baby was on a (presumably clean) blanket, and babies are much safer on the floor than lying on an elevated surface that they can roll off of. God, I’m all worked up again. LEAVE HER AND EVERY OTHER MOTHER ALONE, YOU PEOPLE WITH YOUR GLASS HOUSES AND GIANT ROCKS. NONE OF US ARE PERFECT, LET’S STOP PRETENDING THAT WE ARE, AND MAYBE STOP LOOKING AT YOUR OWN DAMN PHONE IF YOU’RE ONLY GOING TO SPREAD STUPID PHOTOS.

Hoo boy, I need to take a breath here. With all the awful things happening in the world today, let’s all be kind. Be nice. Be understanding and compassionate. And let’s not assume everyone else is the problem with society. If you want change, make a change within yourself first. xo